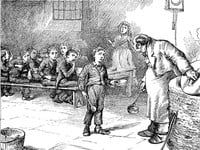 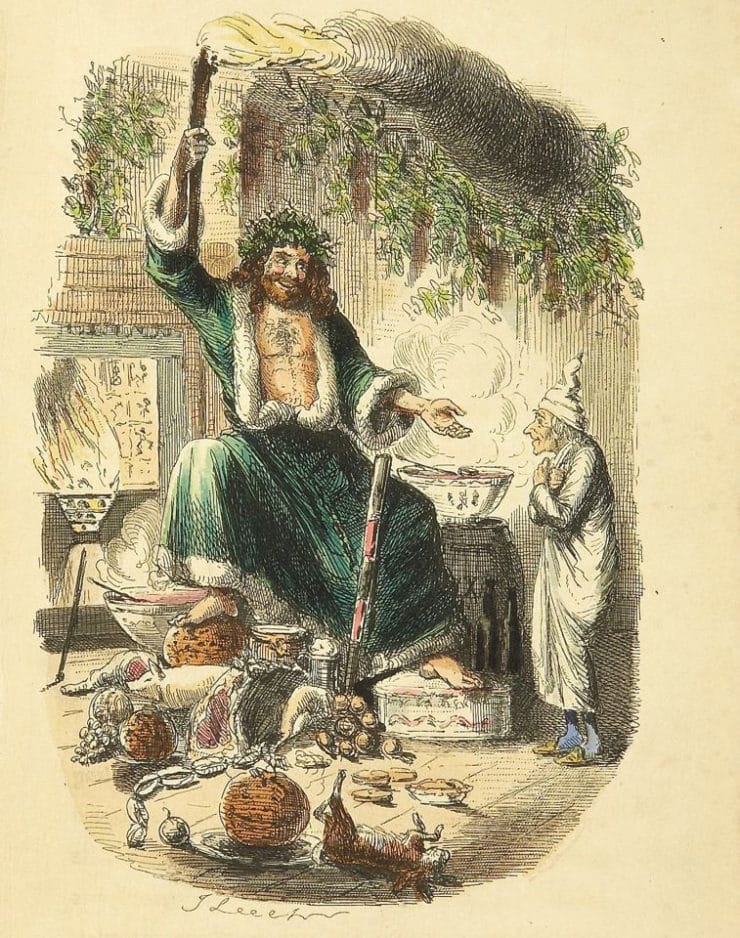 The moment Scrooge’s hand was on the lock, a strange voice called him by his name, and bade him enter. He obeyed. It was his own room. There was no doubt about that. But it had undergone a surprising transformation… Heaped up on the floor, to form a kind of throne, were turkeys, geese, game, poultry, brawn, great joints of meat, sucking-pigs, long wreaths of sausages, mince-pies, plum-puddings, barrels of oysters, red-hot chestnuts, cherry-cheeked apples, juicy oranges, luscious pears, immense twelfth-cakes, and seething bowls of punch, that made the chamber dim with their delicious steam…

As a young girl, my library card was my best friend. I read piles and piles of fiction in junior high and high school. There was nothing I loved more than escaping to the past by burying my nose in a classic novel. Some of the books I remember most are the ones with tantalizing food imagery, with passages so colorful they made me salivate in their luscious detail. Of all the fiction I enjoyed growing up, no author captured the sensory experience of a holiday meal better than Charles Dickens. 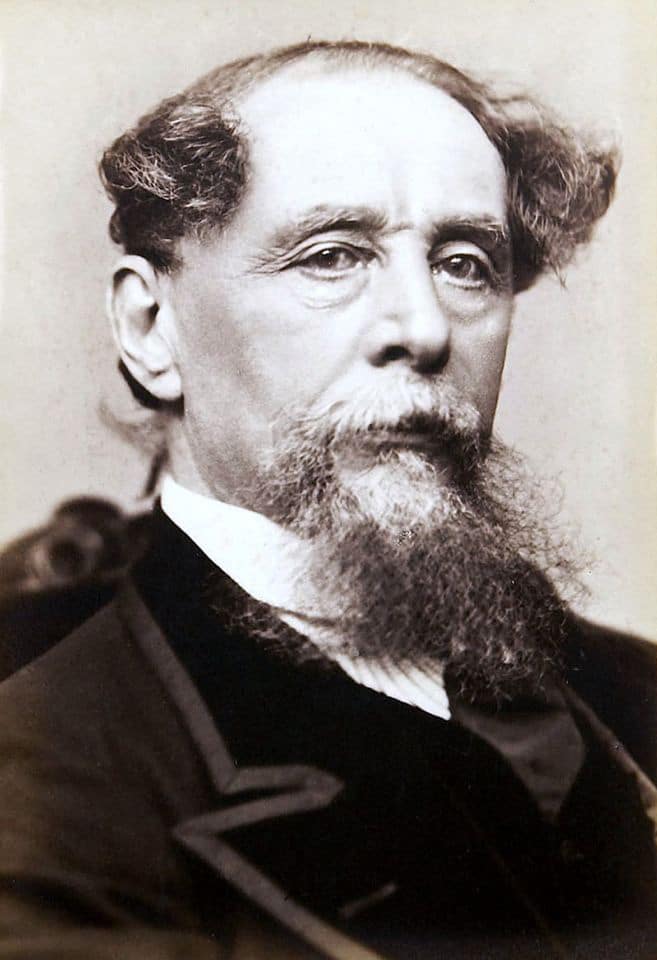 Dickens was a true Victorian foodie, a man who took serious pleasure in eating and drinking. His culinary interests likely stemmed from surviving meager times during his youth. As the son of a man who often lived beyond his means, young Dickens was saddled with the task of making money for his indebted family. After his father was sentenced to prison for his debts, 12 year-old Dickens was forced to leave school and take a job in a boot-blacking factory. Being a naturally intelligent and creative child, this unpleasant factory work was tantamount to a prison sentence for young Dickens. He only worked in the factory for a few months, but the difficult experience helped to shape his personality. Dickens had a flare for championing the everyman in his stories, a writing style that eventually became known as “Dickensian.” His novels stir compassion for the overworked and underpaid. Having lived through lean times, Dickens equated food and drink with abundance, a feeling made evident in nearly every story he wrote.

Dickens got his first taste of success when his novel Oliver Twist was published in 1838. The story, revolving around the life of a downtrodden orphan, was inspired by Dickens’ own childhood. It also contains one of the most famous lines in Victorian literature, which happens to be directly related to food: 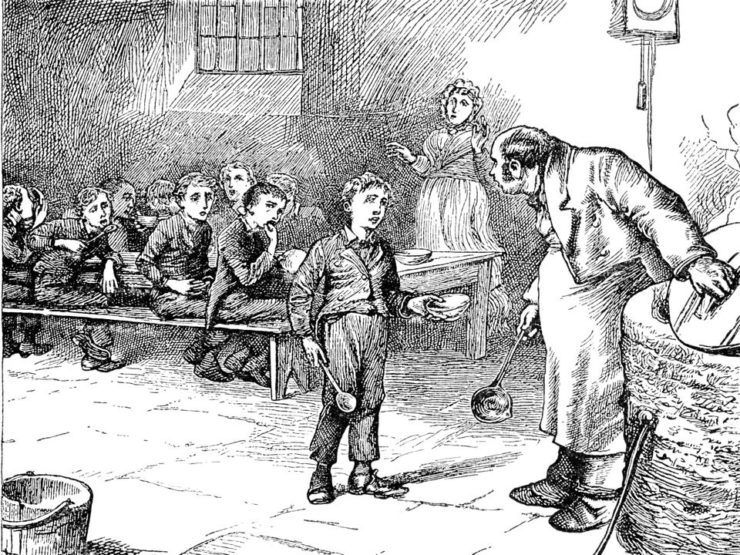 The master, in his cook’s uniform, stationed himself at the copper; his pauper assistants ranged themselves behind him; the gruel was served out; and a long grace was said over the short commons. The gruel disappeared; the boys whispered each other, and winked at Oliver; while his next neighbours nudged him. Child as he was, he was desperate with hunger, and reckless with misery. He rose from the table; and advancing to the master, basin and spoon in hand, said: somewhat alarmed at his own temerity:

This heartbreaking line, bravely delivered by the starving orphan Oliver, has touched readers for nearly two centuries. Perhaps it is because we feel the echo of Dickens’ own struggle in Oliver’s story—the misery of his childhood, and the tenacity it took to rise above the situation he was born into. I find it fascinating that this timeless line revolves around hunger. Gruel is hardly a satisfying meal—a porridge-like mixture that has been thinned down with milk or water and boiled. It’s not very appetizing, but Dickens had a way of treasuring food, no matter how simple.

Dickens paid remarkable attention to detail when describing food in his stories. In Great Expectations, when young Pip describes his sister buttering bread, Dickens manages to turn a simple snack into something far more indulgent.

My sister had a trenchant way of cutting our bread-and-butter for us that never varied. First, with her left hand she jammed the loaf hard and fast against her… Then she took some butter (not too much) on a knife and spread it on the loaf, in an apothecary kind of way, as if she were making a plaister — using both sides of the knife with a slapping dexterity, and trimming and moulding the butter off round the crust. Then, she gave the knife a final smart wipe on the edge of the plaister, and then sawed a very thick round off the loaf: which she finally, before separating from the loaf, hewed into two halves, of which Joe got one, and I the other.

Alcohol was also a recurring theme in Dickens’ stories. Though drinking was largely frowned upon in Victorian society, Dickens was known to enjoy visiting taverns and public houses. He strongly opposed the Temperance Movement, believing that the struggling lower classes deserved, at the very least, the opportunity to enjoy an innocent drink. Dickens’ fondness for spirits can be seen in the character of Mr. Micawber, in David Copperfield, whose troubles were quickly forgotten with a dose of Gin Punch (one of Dickens’ favorite drinks).  In Martin Chuzzlewit, a nurse named Mrs. Gamp is clearly drawn as an alcoholic. And in A Tale of Two Cities, attorneys Stryver and Carton (known as the Lion and the Jackal) guzzle punch while working on a case. 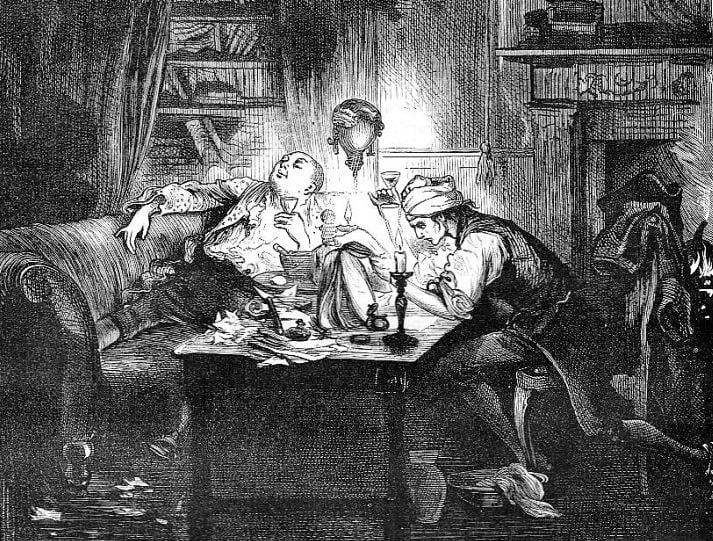 The Lion and The Jackal, A Tale of Two Cities. Wikimedia Commons

The lion then composed himself on his back on a sofa on one side of the drinking-table, while the jackal sat at his own paper-bestrewn table proper, on the other side of it, with the bottles and glasses ready to his hand. Both resorted to the drinking-table without stint, but each in a different way; the lion for the most part reclining with his hands in his waistband, looking at the fire, or occasionally flirting with some lighter document; the jackal, with knitted brows and intent face, so deep in his task, that his eyes did not even follow the hand he stretched out for his glass–which often groped about, for a minute or more, before it found the glass for his lips.

Dickens loved Christmas, evidenced by his many holiday-themed stories. His daughter, Mamie, remembered their family holiday celebrations with great affection. The Dickens family “looked forward to it with eagerness and delight, and to my father it was a time dearer than any part of the year. He loved Christmas for its deep significance as well as for its joys…” (Dining with Dickens, pg. 79). Christmas in the Dickens home was described as an elaborate celebration. He favored goose and plum pudding, and loved to engage in family games and dancing. To drink, there most certainly would have been Gin Punch or Smoking Bishop, a mulled wine and citrus punch with port. 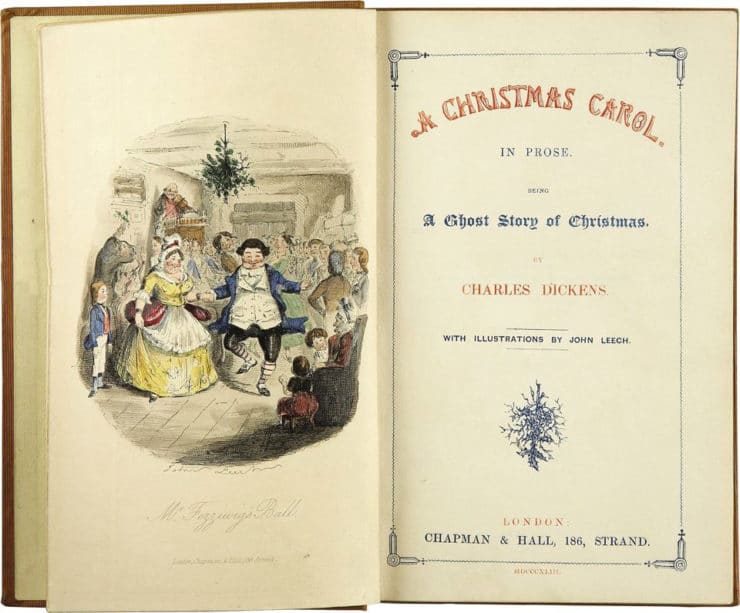 Dickens’ most memorable holiday character, a curmudgeonly old man by the name of Ebenezer Scrooge, is the centerpiece of his classic novel A Christmas Carol. Since its original publication in 1843, it has become one of the most beloved holiday stories of all time. Dickens uses food to demonstrate the key transformation in Scrooge’s character, when he learns the importance of generosity and kindness. To make amends for his past mistakes, he offers a prized turkey to the underprivileged Cratchit family, and chooses to attend his nephew’s holiday meal.

Mrs. Cratchit made the gravy (ready before­hand in a little saucepan) hissing hot; Master Peter mashed the potatoes with incredible vigour; Miss Belinda sweetened up the apple-sauce; Martha dusted the hot plates; Bob took Tiny Tim beside him in a tiny corner at the table; the two young Cratchits set chairs for everybody, not forgetting themselves, and mounting guard upon their posts, crammed spoons into their mouths, lest they should shriek for goose before their turn came to be helped. At last the dishes were set on, and grace was said. It was succeeded by a breathless pause, as Mrs. Cratchit, looking slowly all along the carving-knife, prepared to plunge it in the breast; but when she did, and when the long expected gush of stuffing issued forth, one murmur of delight arose all round the board, and even Tiny Tim, excited by the two young Cratchits, beat on the table with the handle of his knife, and feebly cried Hurrah !

With the holiday season upon us, A Christmas Carol and other Dickens stories remind us that kindness, generosity, and compassion are the values we should honor most. Dickens had a strong moral character, a love for life, and an appreciation for simple pleasures like food and drink. In this, the bicentenary year of Dickens’ birth, what better way to celebrate the holidays than by revisiting his  literary classics? I recommend curling up with one of his books while sipping on this warm holiday drink inspired by the life of Dickens. 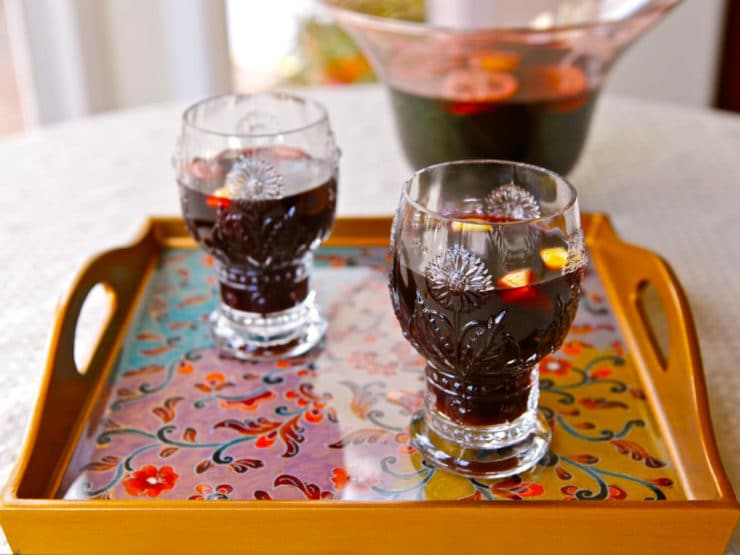