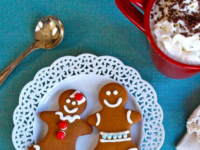 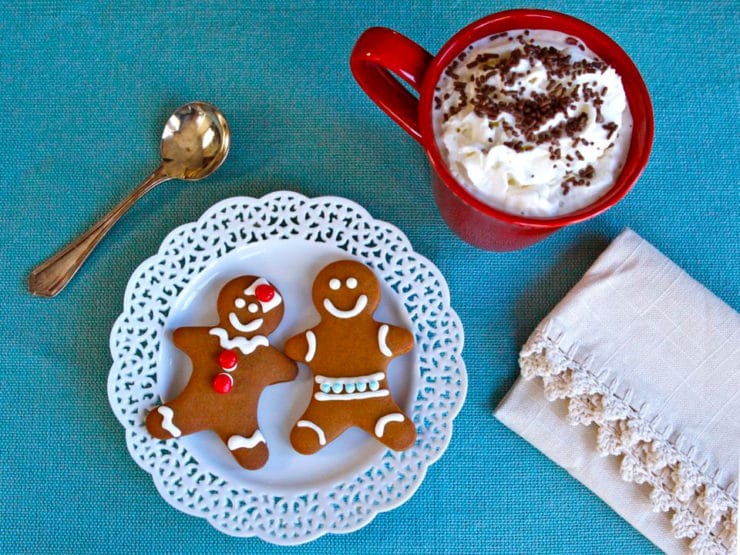 Run, run, fast as you can,
You can’t catch me, I’m the gingerbread man!

~ The Gingerbread Man, a fairy tale

No confection symbolizes the holidays quite like gingerbread in its many forms, from edible houses to candy-studded gingerbread men to spiced loaves of cake-like bread. In Medieval England, the term gingerbread simply meant ‘preserved ginger’ and wasn’t applied to the desserts we are familiar with until the 15th century. The term is now broadly used to describe any type of sweet treat that combines ginger with honey, treacle or molasses.

Ginger root was first cultivated in ancient China, where it was commonly used as a medical treatment. From there it spread to Europe via the Silk Road. During the Middle Ages it was favored as a spice for its ability to disguise the taste of preserved meats. Henry VIII is said to have used a ginger concoction in hopes of building a resistance to the plague. Even today we use ginger as an effective remedy for nausea and other stomach ailments. In Sanskrit the root was known as srigavera, which translates to ‘root shaped like a horn’ – a fitting name for ginger’s unusual appearance.

According to Rhonda Massingham Hart’s Making Gingerbread Houses, the first known recipe for gingerbread came from Greece in 2400 BC. Chinese recipes were developed during the 10th century and by the late Middle Ages, Europeans had their own version of gingerbread. The hard cookies, sometimes gilded with gold leaf and shaped like animals, kings and queens, were a staple at Medieval fairs in England, France, Holland and Germany. Queen Elizabeth I is credited with the idea of decorating the cookies in this fashion, after she had some made to resemble the dignitaries visiting her court. Over time some of these festivals came to be known as Gingerbread Fairs, and the gingerbread cookies served there were known as ‘fairings.’ The shapes of the gingerbread changed with the season, including flowers in the spring and birds in the fall. Elaborately decorated gingerbread became synonymous with all things fancy and elegant in England. The gold leaf that was often used to decorate gingerbread cookies led to the popular expression ‘to take the gilt off of gingerbread.’ The carved, white architectural details found on many colonial American seaside homes is sometimes referred to as ‘gingerbread work’.

Gingerbread houses originated in Germany during the 16th century. The elaborate cookie-walled houses, decorated with foil in addition to gold leaf, became associated with Christmas tradition. Their popularity rose when the Brothers Grimm wrote the story of Hansel and Gretel, in which the main characters stumble upon a house made entirely of treats deep in the forest. It is unclear whether or not gingerbread houses were a result of the popular fairy tale, or vice versa.

Recently the record for world’s largest gingerbread house was broken. The previous record was set by the Mall of America in 2006. The new winning gingerbread house, spanning nearly 40,000 cubic feet, was erected at Traditions Golf Club in Bryan, Texas. The house required a building permit and was built much like a traditional house. 4,000 gingerbread bricks were used during its construction. To put that in perspective, a recipe for a house this size would include 1,800 pounds of butter and 1,080 ounces of ground ginger. Sounds more like a gingerbread resort!

Gingerbread arrived in the New World with English colonists. The cookies were sometimes used to sway Virginia voters to favor one candidate over another. The first American cookbook, American Cookery by Amelia Simmons, has recipes for three types of gingerbread including the soft variety baked in loaves:

Soft gingerbread to be baked in pans.

This softer version of gingerbread was more common in America. George Washington’s mother, Mary Ball Washington, served her recipe for gingerbread to the Marquis de Lafayette when he visited her Fredericksburg, Virginia home. Since then it was known as Gingerbread Lafayette. The confection was passed down through generations of Washingtons.

Of course I couldn’t explore the history of gingerbread without making a few cookies of my own. There are many tempting varieties, but ultimately I decided to go the traditional route and make gingerbread men. This recipe is slightly adapted from the now out-of-print New York Times Heritage Cookbook. It makes sturdy cookies with a crunchy snap, perfect for building gingerbread house walls (if you’re brave enough to forgo a kit!). I added a touch more ginger to the cookies to give them more flavor. You also might consider adding a splash of rosewater to the dough as a nod to Amelia Simmons! The gingerbread men bake up smooth and flat, the perfect pallet for decorating with royal icing, candies, sugar pearls and sprinkles. If you’d like to learn how to ice the cookies as they appear in the pictures, here are two tutorials I wrote up last year that will walk you through the process:

Nutrition Facts
Gingerbread Cookies
Amount Per Serving
Calories 98 Calories from Fat 27
% Daily Value*
Fat 3g5%
Saturated Fat 1g6%
Cholesterol 11mg4%
Sodium 91mg4%
Potassium 108mg3%
Carbohydrates 16g5%
Sugar 7g8%
Protein 1g2%
Vitamin A 95IU2%
Calcium 22mg2%
Iron 0.9mg5%
* Percent Daily Values are based on a 2000 calorie diet.
Tried this recipe?Let Us Know How It Was In The Comments.
3 from 2 votes
Nutritional information should be considered an estimate only; please consult a registered dietician, nutritionist, or your physician for specific health-related questions. Read more here. Please note that the recipe above is published using a recipe card plugin, with preexisting software which can auto-calculate metric measurements, as well as change the number of servings. Metric conversions and changes to the number of servings (resulting in different ingredient amounts) will only appear in the ingredient list, and are not changed within the step-by-step directions of the recipe.