A little over a week ago, I embarked on a five week culinary journey.  The trip is part vacation, part research–I’ll be studying Biblical foods and the history of Jewish cuisine while abroad.

To sample Jewish food in different parts of the world, with a focus on Israeli food and Biblical cuisine.

The bulk of my trip will be spent in Israel. But first I planned a stop in Paris, so I could sleep off my jetlag in one of the most beautiful and food-centric cities in the world. It’s my fourth time visiting France, and I was very excited to revisit the spectacular Parisian food scene. I’m traveling with my family; they were obviously eager to join me on my foodie adventures. I’ll be sharing our most interesting travel food experiences with you here on the blog.

Our first night, we checked in at our hotel near the Arc de Triomphe, then we walked down the Avenue de la Grande-Armee to our favorite couscous place—Chez Bebert. It’s just next to the Palais des Congres de Paris, a large concert hall and convention center. Chez Bebert serves traditional North African-style Couscous. Here’s a pic of the menu (they were kind enough to offer me an English one): 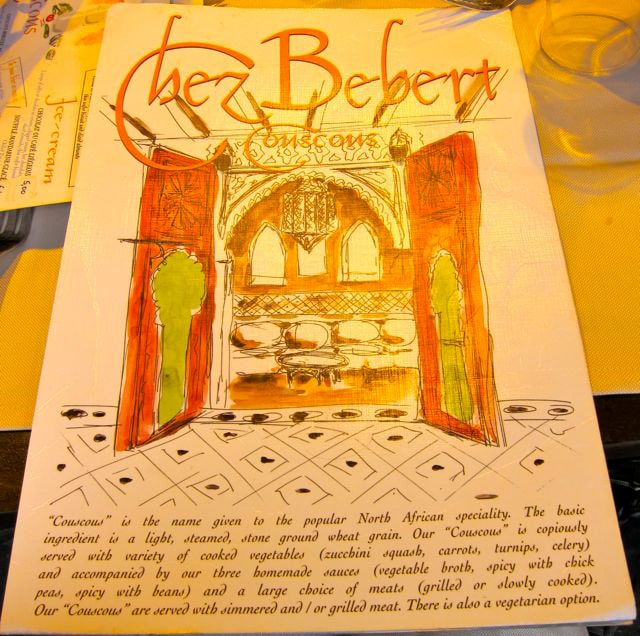 Couscous is one of my favorite treats. My grandma introduced me to it when I was a child. Back then, couscous was considered pretty exotic to most Americans. My grandparents were world travelers; they had picked up a taste for the dish while traveling through the Middle East. The couscous itself is made from tiny rolled pieces of semolina, flour, water and salt. It’s somewhere between a pasta, rice, and a grain; the tiny, delicate consistency of the couscous pieces allow it to soak up the flavor of whatever dish you add to it. Couscous is typically served with vegetables and legumes (chickpeas, zucchini, carrots) then topped with chicken or meat. The ingredients that top the couscous are slow-simmered to a soft, tender texture.

Here is a picture of our couscous. I ordered mine vegetarian style, so it was served from the main dish in the middle of the table, which contains only vegetable ingredients. The broth in the middle of the plate is poured over the couscous to moisten it and add flavor (couscous on its own is pretty bland). Meats are served ala carte on the side, you add them to a “bed” of couscous on your plate. They also served us a North African red chili sauce called harissa to spice things up. Harissa is another one of my favorites, I plan to blog about it later this year. 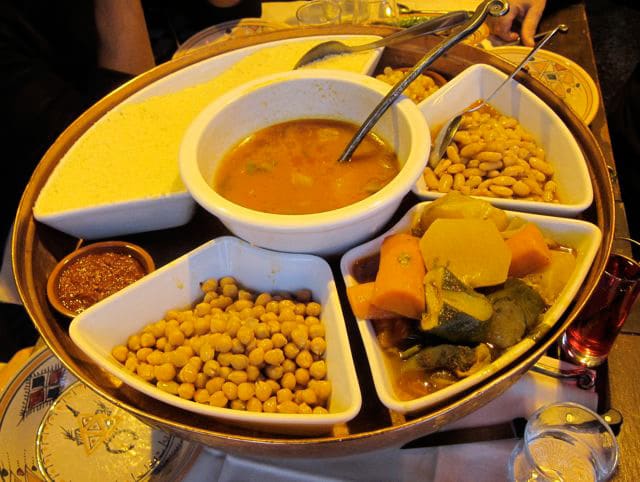 Here are some pictures of what my family ordered. 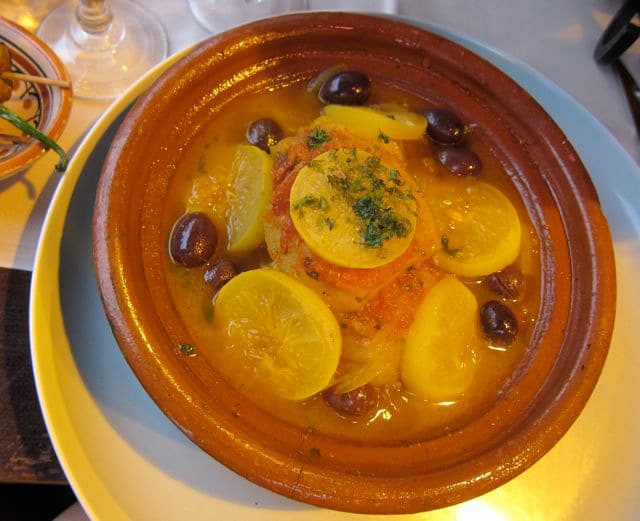 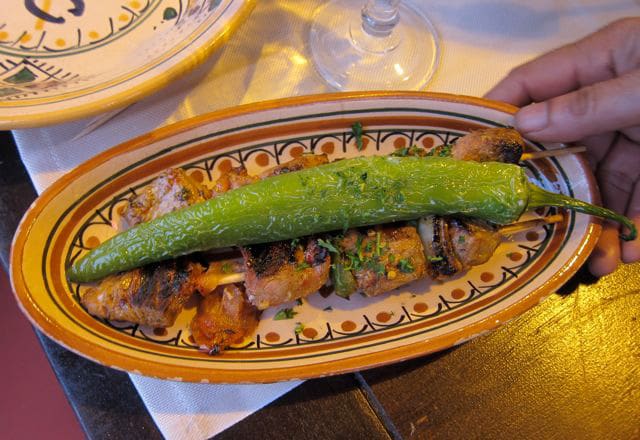 Chez Bebert is run by a Tunisian family. Tunisian cuisine is similar to Moroccan cuisine, which I am very familiar with… our extended family includes Moroccan Jews. I have my own recipe for traditional Jewish Moroccan lemon chicken with olives, the recipe for which is included in my upcoming cookbook.

Here I am enjoying my veggie couscous. Please excuse my “schleppy” appearance, I was very jetlagged! 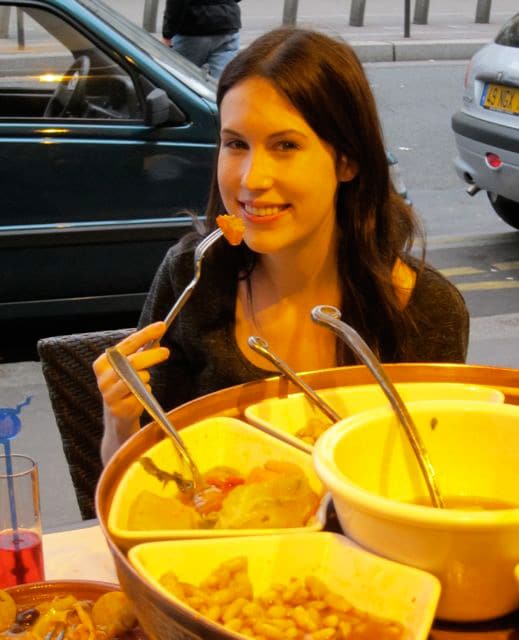 And of course, no couscous meal would be complete without a glass of sweet mint tea.  🙂 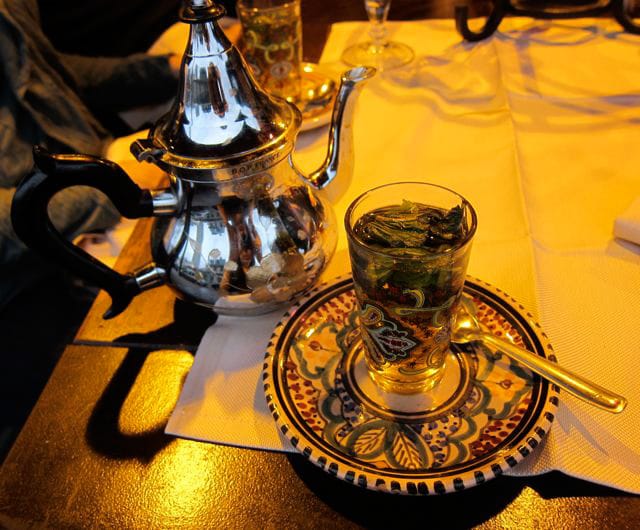 The next day, we slept in a bit and missed breakfast (the time change is brutal!). We decided to wander towards the Champs-Elysees and try our luck with a local bistro. When I saw several patrons of the Deloren Café wearing kippahs, I knew I’d found our lunch spot. A kosher French cafe? Count me in! 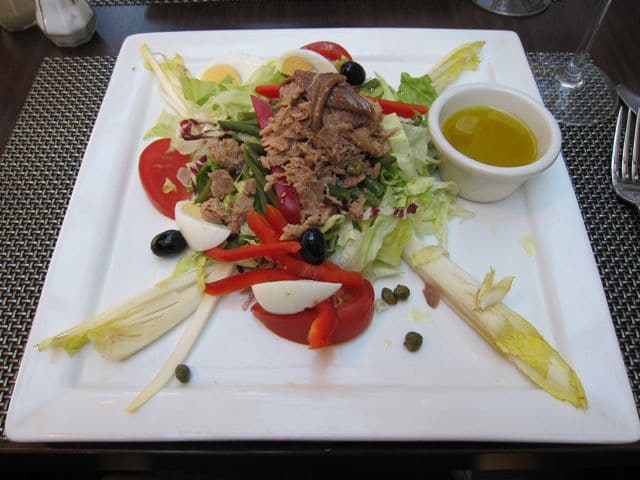 Our friend ordered the cheeseburger with egg. I was a little shocked to see a cheeseburger on the menu, but the waitress assured me the cheese was pareve. Our friend said it tasted like normal American cheese. 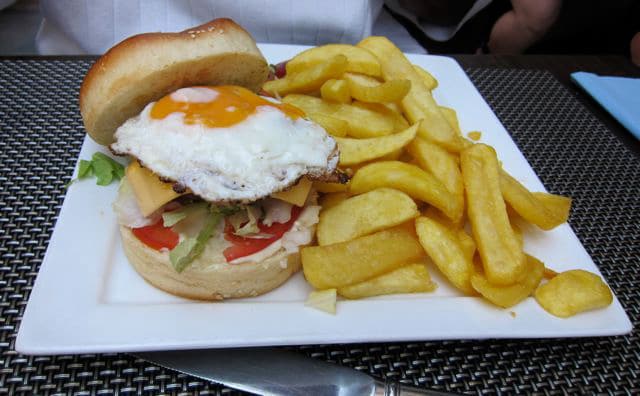 Overall, the food at Deloren was descent, but nothing extraordinary.

That night, we dined at a famous French restaurant called La Coupole–a very special dining establishment with a rich history. It’s a traditional French Brasserie that is over 80 years old. From their website:

Much of the legend of Montparnasse was forged in this former wood and coal store, bought in 1927 by Messrs. René Lafon and Ernest Fraux – managers of the Dôme café – to create the largest brasserie in Paris – 1000m² which were to grace the presence of all the rive gauche’s artists of all nationalities. The visitor’s book is a veritable catalogue of modern artists and the vast bar has welcomed great personalities such as Kessel and Hemingway. 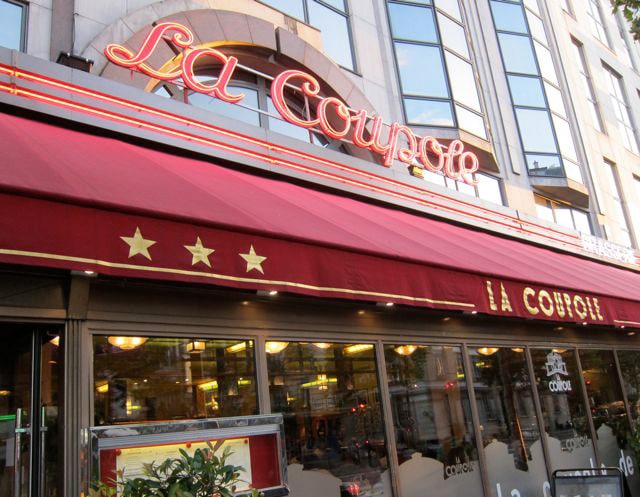 Dining at La Coupole is a feast for the eyes as well as the stomach. The restaurant’s pillars are like a living museum, having been painted decades ago by students of Matisse and Leger. The restaurant has served the likes of Simone de Beauvoir, Salvadore Dali, Josephine Baker, Pablo Picasso, and Jean-Paul Sartre. Even today it attracts celebrities—on our evening out, we dined two tables down from Lakers center Andrew Bynum. Go Lakers! We love LA.  🙂

At our table, we enjoyed several typical French dishes. I ordered lemon sole. It was a simple dish–the presentation wasn’t very pretty, but the meal was perfectly cooked. La Coupole’s fishmonger here really knows how to select a meaty, delicious fish. 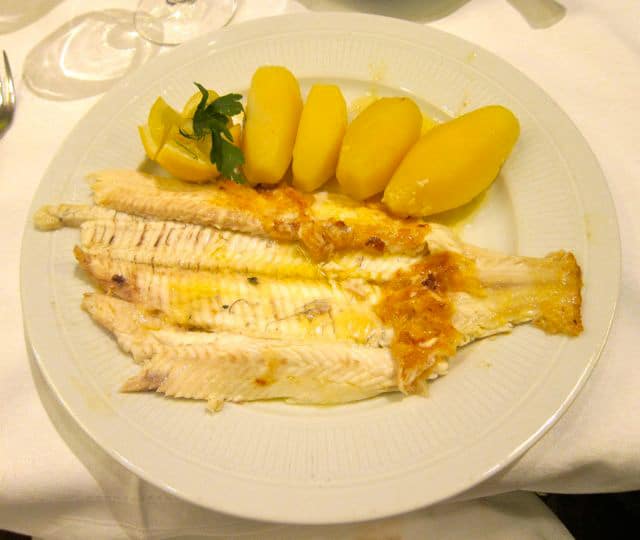 While my dish was on the simple side, I really enjoyed it… especially the white wine they suggested I pair it with.

My family ordered a variety of dishes. T-Bird chose salmon with cream sauce, herbs, and zucchini. J chose a favorite house dish—lamb  curry—which has been on their menu for decades. It was served by a man in traditional Indian garb, whose only job it seemed was serving the curry. I’m told it was quite delicious. I was too shy to ask for a pic of the server, but here’s the lamb: 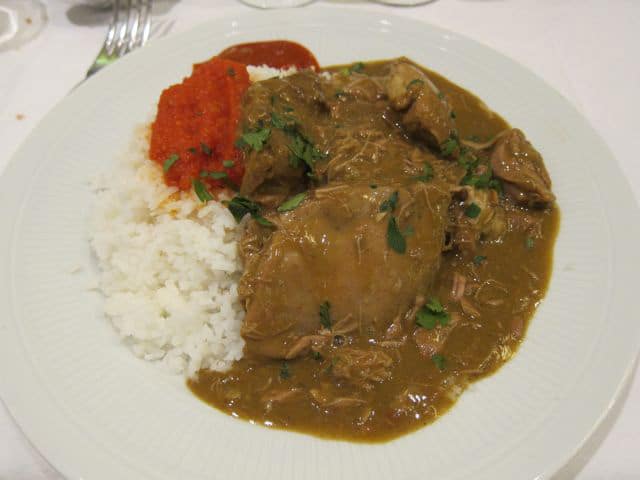 My husband had an entrecote steak, a staple on the French menu. He ordered it medium well, but the waiter mistook his order for medium (known in French as “a point”). In France, medium is generally a lot pinker than medium in America, so the steak was too rare for his taste. The server was kind enough to cook it a bit longer for us, but we could tell he was slightly annoyed by the request. No matter—my husband enjoyed the steak much more after the fix. If we annoyed a French waiter in the process, I’m not too worried about it. I also prefer my steak on the well-done side, which I know many people think is sacrilegious. I’ve been told plenty of times that overcooking can ruin a good steak. Call me crazy, I don’t like to see my steak bleeding. My favorite way to cook steak is somewhere between medium and medium well, with a nice bit of pink left inside for tenderness and juice. 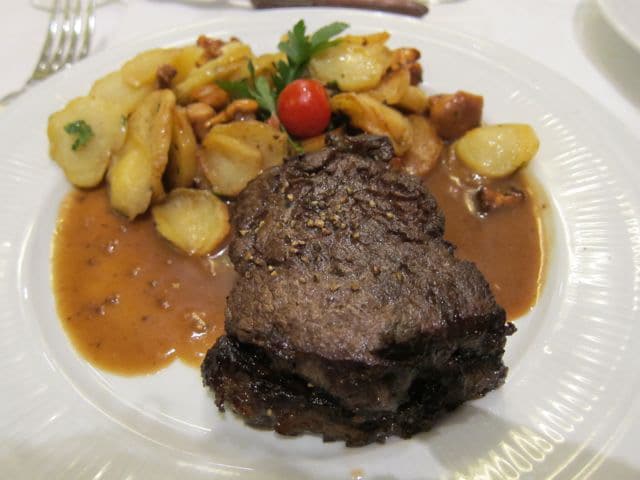 In general, the French prefer their steak more rare than most other countries. For Americans and Brits who plan on traveling to Paris, it will help you to know how to order your steak the way you like it. Here are the definitions of the ways you can have your steak cooked (in order of least cooked to most):

bleu – This means the meat is essentially raw, or very rare—only the surface of the meat is cooked/warmed, the inside meat remains at room temperature. The word translates literally as “blue” in French.

saignant – Most of the inside meat inside is rare, similar to how a rare steak is cooked in America. The interior of the steak will be rare, but warm. The word translates literally as “bloody” in French.

à point – Similar to what we in America call “medium rare,” slightly less than what we call “medium.” About half of the meat inside is left red, with the outer parts cooked. The center of the meat is rare, but the inner temperature will be very warm.

bien – This means the steak is cooked medium—the interior is pink, with a touch of red in the center and hot throughout.

bien cuit – Similar to what we would call “medium well.” The meat is almost cooked through, but there will still be a touch of red/pink inside. Translates literally to “well cooked” in French.

très bien cuit – Meat is cooked thoroughly, with little or no pink/red left in the middle. What we would call “well done” in America. Translates to “very well cooked” in French.

If you like your meat well done, be sure to make your choice clear to your server. Don’t worry if they give you a funny look. You’re entitled to have your steak well done, if that’s the way you like it!

In my next blog, I’ll share with you the highlights from the second half of our stay in Paris, including our visit to a special Yiddish restaurant called Le Train De Vie!