During our last few days in Paris (see Paris, Part 1 for the first half of the trip), we visited many of the obligatory tourist spots—the Eiffel Tower, Versailles, the Basilique Sacré-Coeur, the Louvre. We seemed to have a chronic case of bad timing when it came to landmarks—we visited Versailles on a Monday, which apparently is the only weekday that the inner palace is closed for cleaning. On Tuesday, we tried the Louvre, only to discover that Tuesday is—you guessed it—the only weekday that the Louvre is closed for cleaning. Oy vey! Next time, we’ll have to plan a little better. Lesson learned! 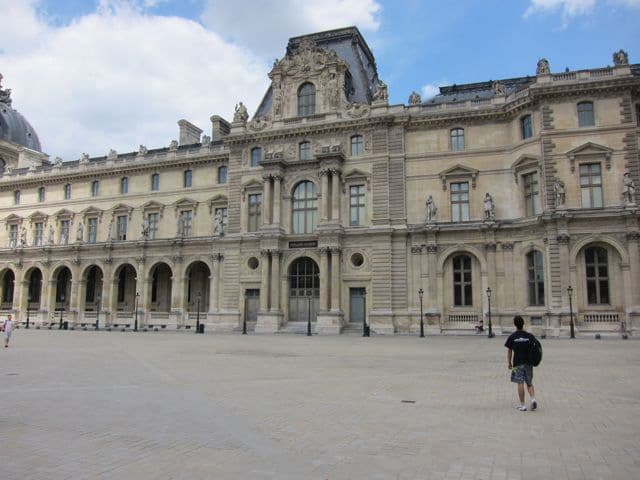 Traveler’s tip– don’t visit the Louvre on a Tuesday.

Luckily, our culinary adventures were not diminished by these little misfortunes. In fact, we had some pretty fun dining experiences! Here are the highlights…

On the advice of my friend Etti Hadar, we visited a kosher restaurant called Le Train De Vie, or “The Train of Life.” The restaurant resides in the Jewish quarter in the Marais district of Paris, known as the “Pletzl” (a Yiddish word that means “little place”). The heart of this area is a street called the Rue des Rosiers, which is lined with Jewish restaurants, synagogues, and falafel joints. I even saw a kosher pizza place on one corner! 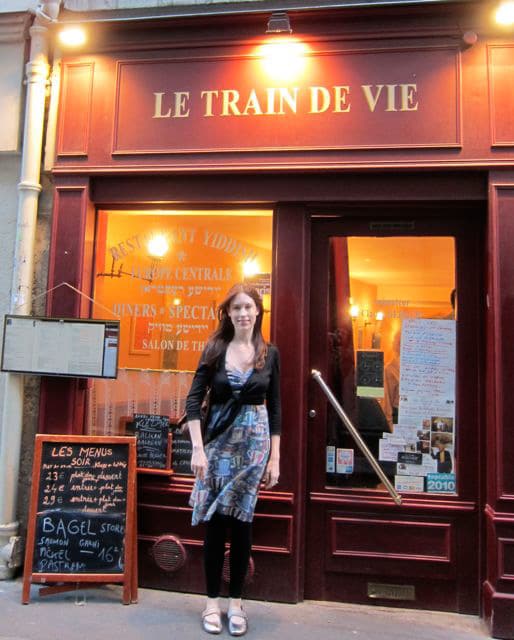 Me in front of Le Train De Vie

Le Train De Vie is run by a small, enthusiastic, white-haired man named Claude Berger. On the night we dined there, he escorted us down a steep stairwell into a cave-like basement where a few tables were set in front of a small stage area. The friendly waiter served our appetizers—an assortment of Yiddish-style salads including chopped liver, eggplant, cabbage, and some other unrecognizable concoctions along with sliced rye bread and pickles. As we nibbled our way through the mystery salads, the klezmer music began. 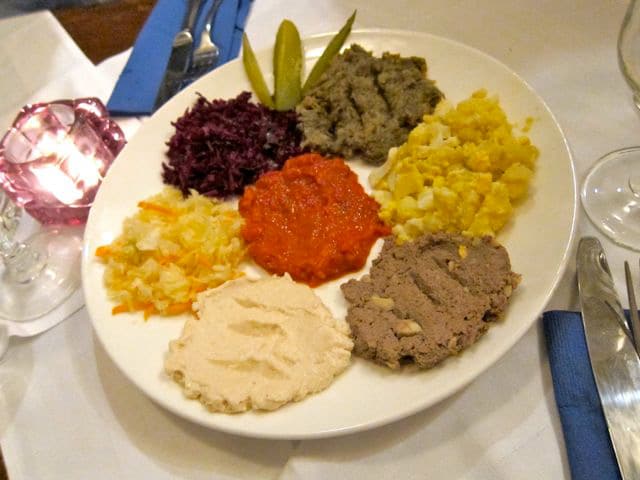 “Klezmer” is literally the Yiddish word for music, but it has come to describe a distinctive style of music played by Ashkenazi Jews. Klezmer music originated in the shtetls (villages) of Eastern Europe; the klezmer style is strongly influenced by Romanian music as well as Ottoman and Ukranian melodies. At its heart, klezmer is meant to be dance music—which may explain why I couldn’t stop tapping my foot during the performance!

One of the more interesting aspects of klezmer music is the way the instruments are played. Clarinets and strings are used to produce human-like sounds, from laughing to crying to wailing. In this way, the instruments become characters within the drama of the song.

The musical Fiddler on the Roof has many klezmer-inspired melodies—the famous “Bottle Dance” sequence uses a klezmer clarinet to create tension as the men balance glass bottles on their hats. The Yiddish sound has even permeated mainstream pop music. A klezmer melody can be heard in Supertramp’s famous song “Breakfast in America” (this was discovered as we listened to the album on our most recent drive out to Masada!). Here’s a clip of the Bottle Dance from Fiddler:

When we visited Le Train De Vie, the owner Claude performed traditional klezmer music with a two-man clarinet/accordion group called the Balkan Balagan.  I tend to prefer klezmer ensembles with a string player, but the simple combination of clarinet and accordion created some really interesting melodies. The clarinet was played masterfully—it took on a life of its own, becoming a character that laughed and wept on command. 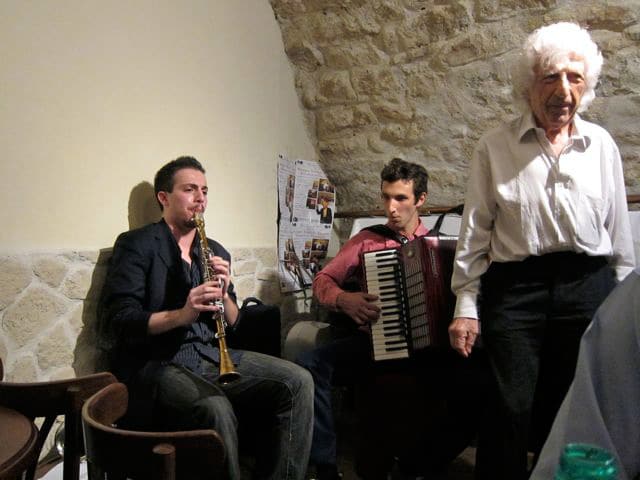 Claude and the Balkan Balagan

Each song they performed was a story, and Claude sang those stories with gusto. He also provided an introduction to each song (in both French and English for our benefit), which explained the deeper meaning and symbolism behind the lyrics. Many of the songs had roots in Ashkenazi Jewish history—some were romantic, some sad, some meant to teach a lesson. The music was filled with emotion.

All of this klezmer music provided an unforgettable entertainment experience—but what about the food? Well, on a scale of 1-10, I’d have to give the food a 4. It was not gourmet fare by any means. I love good Yiddish food, but after savoring the home cooking of many gifted bubbes over the years, I can’t say Le Train De Vie’s fare was all that great.

My fiancé had Le Poulet Farci—chicken with egg stuffing. Here’s a pic: 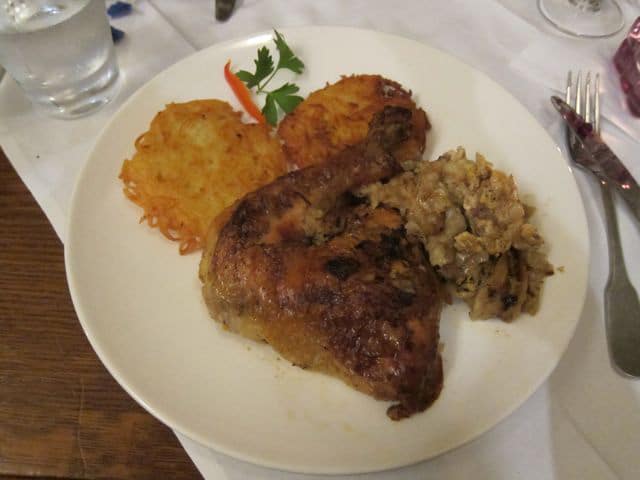 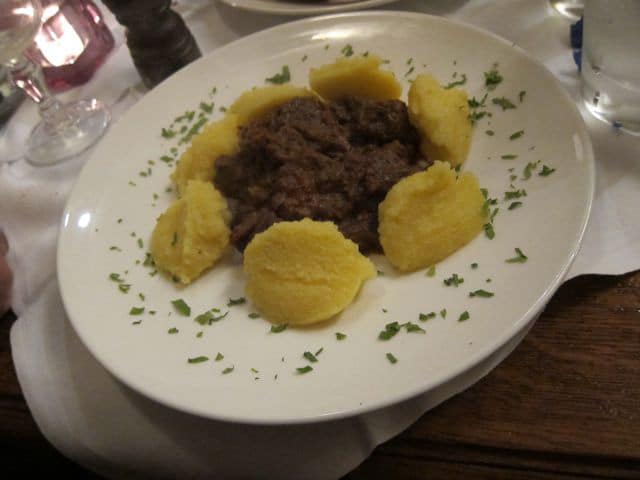 I had the stuffed bell pepper (I can’t remember what the dish was called in French!). 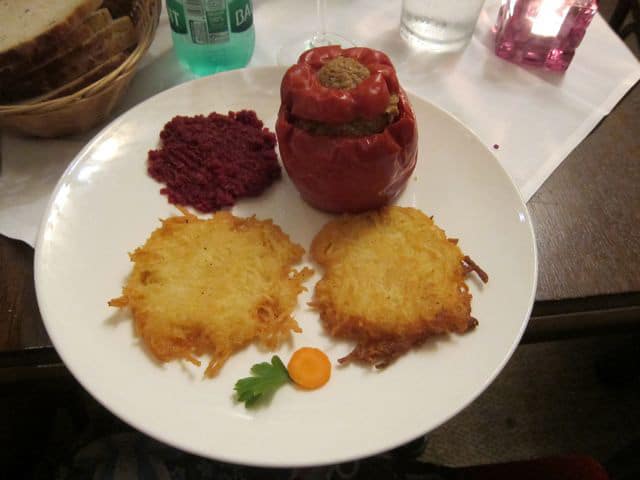 All of the dishes came with fried latkes, which seem to be a trademark of the restaurant.

Altogether, the food was just okay. That said, I don’t think people really go to Le Train De Vie for the food. They go for the klezmer experience, which I can whole-heartedly recommend for people who are interested in Yiddish history and culture.

I have to mention a couple other food stops in Paris, only because they were super fun!

My husband and I travel a lot. We often find ourselves sleeping in past breakfast because of the jetlag, so we sometimes joke that we’d like to open a chain of restaurants where breakfast is served all day long. On this trip, I discovered that somebody beat us to it!

Twinkie Breakfasts is located in the Saint-Denis area of Paris. Saint-Denis is one of the less savory areas of the city, known for its high crime rate and strip clubs. How did we find ourselves in this Parisian red-light district? We sought out Twinkie Breakfasts because Little J was craving American-style pancakes—nearly impossible to find after 10am in Paris. The café shines like a little beacon of homey cooking in the middle of this strange and wild suburb. 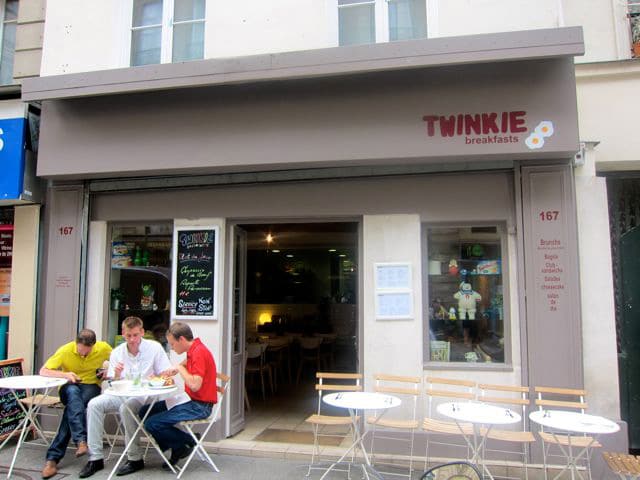 The café is small and quaint, decorated by cartoonish American icons like the Stay Puft Marshmallow Man and Scooby Doo. Twinkie boxes are placed creatively throughout the restaurant. The waiters wear cartoon-inspired t-shirts. The atmosphere is fun, fresh, and whimsical.

The service we received at Twinkie was probably the best of our entire Paris visit. Parisians aren’t known for their hospitality, especially when it comes to tourists. However, the waiters at Twinkie were super friendly and eager to make us happy. They even made me an unsweetened iced tea, which is really hard to find outside of the U.S. Iced tea is my weakness, but I hate sugary tea, and the bottled stuff never tastes right. Our Twinkie waitress made the tea fresh and poured it over ice for me, which started the meal on a very “up” note. 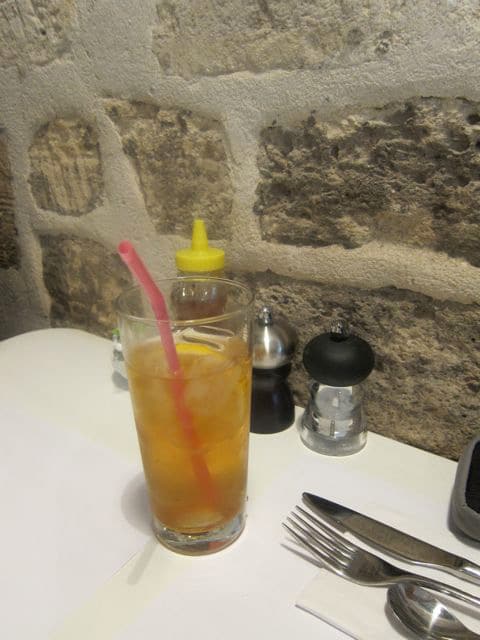 Ahhh, fresh iced tea. It doesn’t take much to keep me happy! 🙂

I can happily give a shining review to the food as well. The menu is very creative, featuring breakfast choices from all over the world. Little J had the American Breakfast, which included her beloved pancakes and hash browns. My fiancé and I had the Frokost breakfast, which I believe was Norwegian inspired. It consisted of eggs benedict with smoked salmon, poached eggs, and hollandaise on toasted English muffins. It also included a generous side of fresh rocket greens. 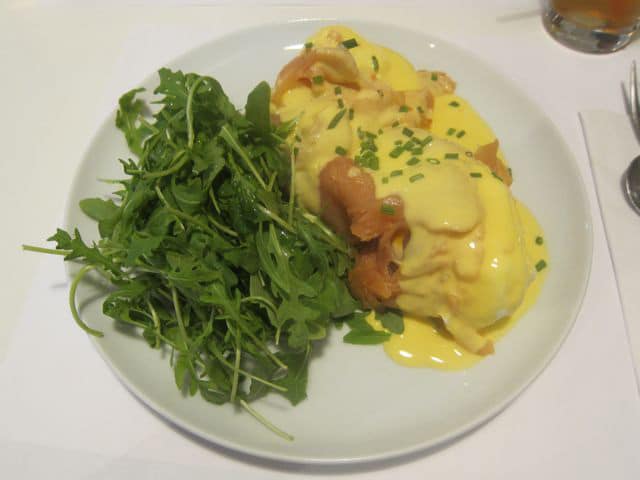 T-Bird and J had the Arouhat Boker, an Israeli-style breakfast complete with a cheese omelet and Israeli salad. 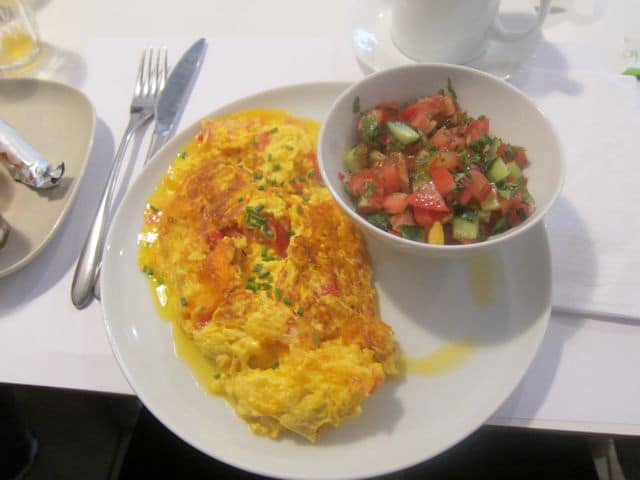 There were also French, English, and custom Twinkie-style breakfasts, as well as gluten-free and lactose-free choices. The waitress was eager to make our random little requests happen, substituting tea for juice and putting veggies in an otherwise plain omelet. This may not seem like such a big deal, but in Europe, it can be tough getting anybody to make even the most minor change to a dish. Try asking for sauce on the side, and you’ll be lucky a “sorry” before a curt and uncompromising “no.”  Twinkie Breakfasts had a totally different mentality; they put the customer first and made us feel like valued patrons.

When we were jetlagged and hungry for breakfast, Twinkie gave us a taste of home. If you’re in Paris and feeling homesick for a good old-fashioned American breakfast, or you want to venture out and try some multi-cultural breakfast choices, seek out Twinkie Breakfasts. You won’t be disappointed. 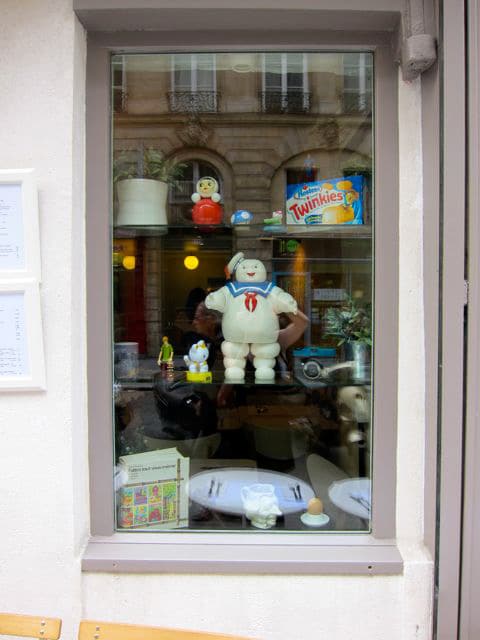 The front window of Twinkie Breakfasts

Our final meal in Paris took place at a Greek restaurant called Le Minotaure. We happened upon the place while wandering through the Montparnasse district. Little J was craving salmon, and the rest of us love Greek food. Le Minotaure seemed like a good choice. 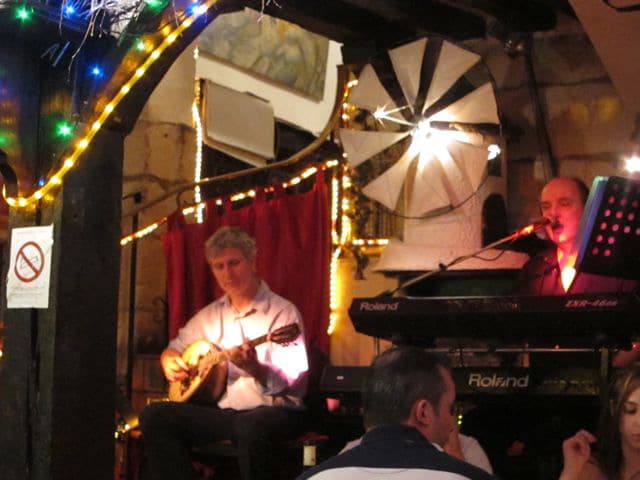 I mention Le Minotaure here not because of the food—which was ok. I mention it for the experience. Where else can you find a Cesar statue, a disco ball, and live Greek musicians to entertain you while you munch on your taramosalata? The atmosphere was kitschy, crazy, and super fun. 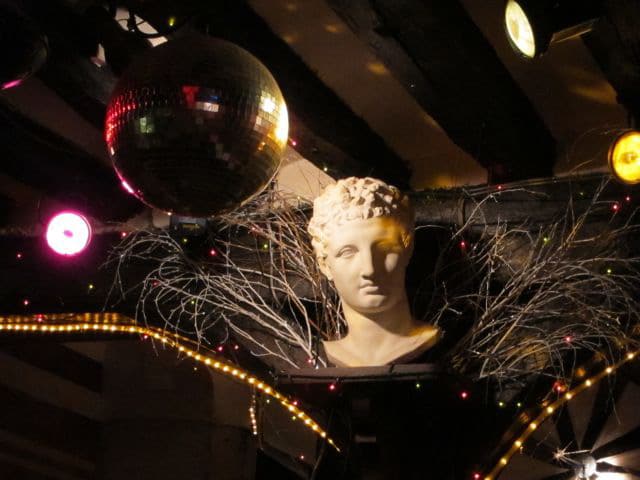 Cesar on the dance floor

As with any good Greek restaurant, the night started with a selection of appetizers—hummus, stuffed grape leaves, salad with feta, and taramosalata (Greek caviar). 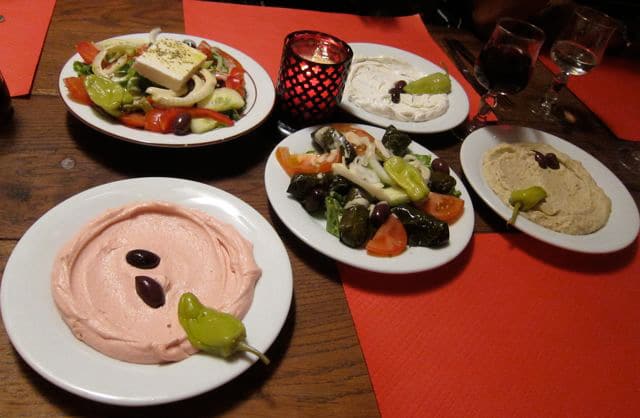 I had the whole fish with tomato rice and potato. 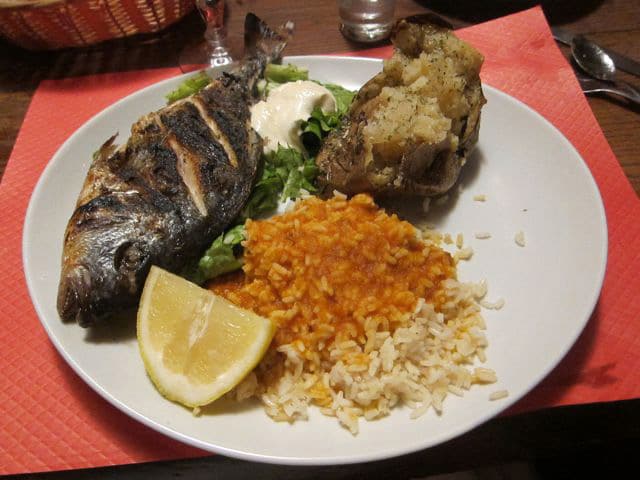 My meal– it was tasty, but not outstanding.

In all honesty, I can’t remember what everybody else had—I forgot to take pictures. Perhaps the ouzo went to my head! But again, it wasn’t the food that made Le Minotaure memorable. It was the disco ball. 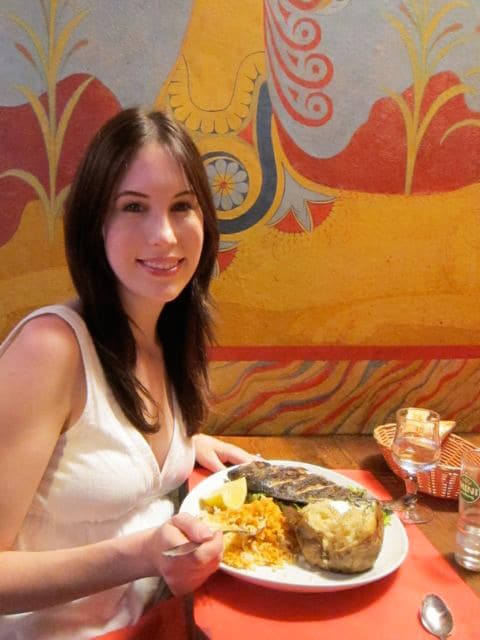 Enjoying my last dinner in Paris– till next time. Opa!!

We visited some other Parisian restaurants on our trip, but these were the most interesting highlights. Next stop—Israel! We’ve been having a FABULOUS time in Israel, and my next few blogs will highlight my many culinary adventures here. I have to say, after spending two weeks in Tel Aviv, I believe it is poised to unseat Paris as the top foodie city in the world! Till next week, friends… au revoir!