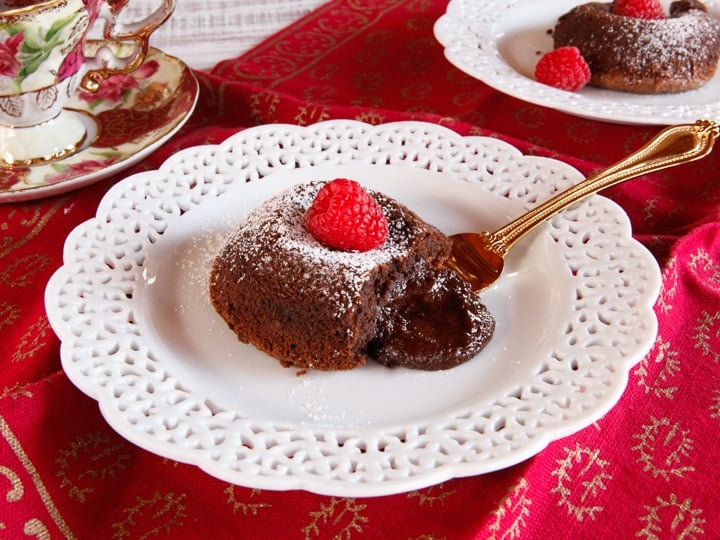 History & Recipe for Molten Chocolate Cakes, aka Chocolate Lava Cakes - The Story Behind a Beloved Dessert from Food HIstorian Gil Marks
216 shares
5 from 1 vote
Jump to Recipe Email Me Recipes 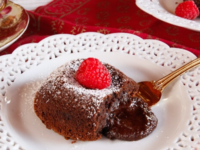 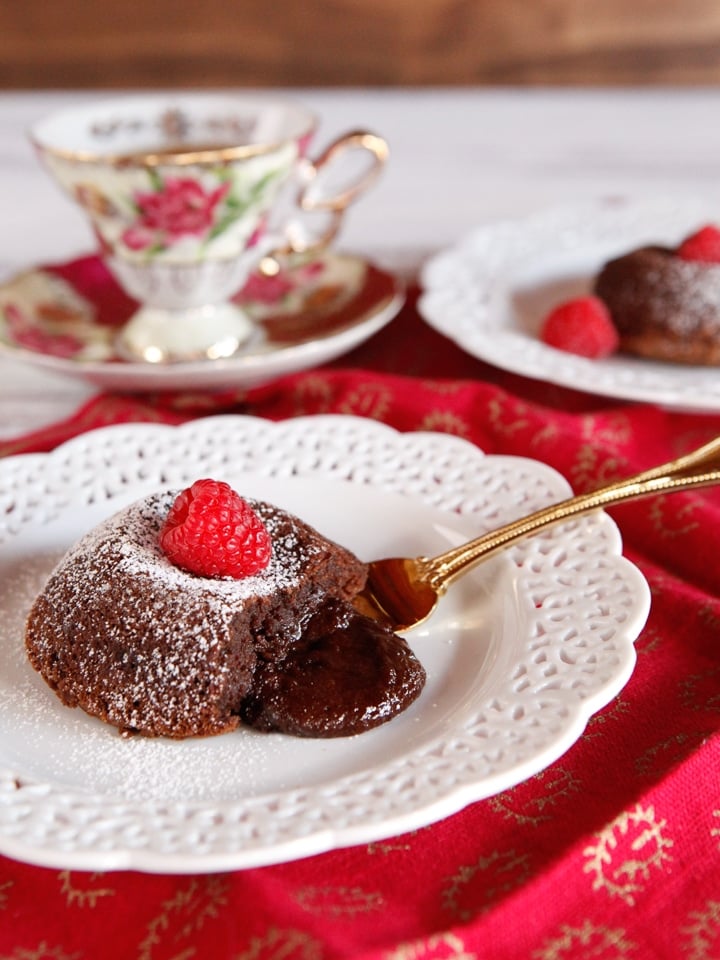 Baked flourless and nutless chocolate desserts date back in America to the mid-nineteenth century, such as the “Chocolate Pudding” in The Lady’s Receipt-Book by Eliza Leslie (Philadelphia, 1847): “CHOCOLATE PUDDING.–Have the best and strongest American chocolate or cocoa. Baker’s prepared cocoa will be found excellent for all chocolate purposes; better indeed than any thing else, as it is pure, and without any adulteration of animal fat, being also very strong, and communicating a high flavor…”

Toward the end of the nineteenth century, as the term chocolate pudding came to denote a new soft, unbaked mixture thickened with cornstarch and cooked in a pan atop the stove, the popularity of the baked version waned. Then more than a century after The Lady’s Receipt-Book, flourless (or very low flour) chocolate cakes underwent a revival. In a 1959 issue of McCall’s magazine, Mapie de Toulouse-Lautrec, director of a cooking school at Maxim’s restaurant in Paris and wife of a cousin of the artist Henri Toulouse-Lautrec, introduced America to “French Chocolate Cake,” a firm, creamy baked chocolate custard containing a pound of semisweet chocolate, five ounce of butter, 4 separated eggs, and a single tablespoon of flour. Earlier recipes for “French chocolate cake” in America, dating back to the nineteenth century, were chocolate butter cakes with a standard amount of flour. The September 7, 1969 issue of The New York Times published a “French Chocolate Cake” recipe very similar to Toulouse-Lautrec’s, also containing a single tablespoon of flour, but attributed to “Evelyn Sharpe,” and sparked new interest in this type of treat. 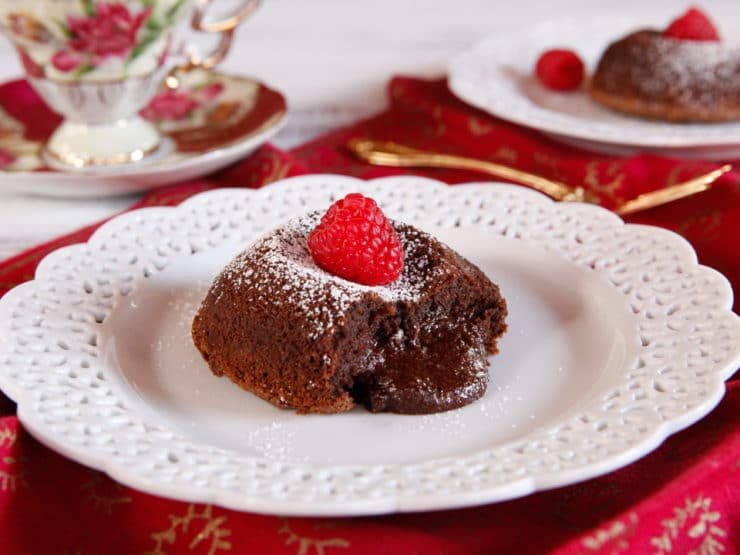 Then during the 1970s and 1980s, chocolate cakes without a hint of flour became the rage in the United States. Nearly every upscale restaurant in the country had a version on its menu and recipes were prominently featured in newspapers and cookbooks. Flourless chocolate cake came to the attention of the gluten intolerant, further increasing its popularity. Small undercooked versions with a liquid center, which widely supplanted flourless chocolate cake on restaurant menus beginning in 1987, became known as molten chocolate cakes and chocolate lava cakes.

Vongerichten, originally from the outskirts of Strasbourg, France, arrived in Boston in 1985 to launch his restaurant, Le Marquis de Lafayette. In the following year, he became executive chef of Lafayette in New York City and then opened a series of three- and four-star restaurants in the Big Apple. Two differing accounts of the origin of this cake have been ascribed to Vongerichten: one credits his mother for teaching him the dish, while the other claims it was the result of the chef accidentally removing a chocolate torte from the oven before it was completely done. Some sources contend these small warm chocolate cakes were actually created by other French chefs earlier in the 1980s. Nonetheless, it was certainly Vongerichten, beginning in 1987, who popularized them in America. During the 1990s, individual soft-centered warm chocolate cakes emerged as the most imitated dessert in American restaurants and, since they are actually easy to make at home, a standard in cookbooks. It is ideal restaurant fare (and for home dinner parties) as the batter can be prepared well ahead, then cooked on order just before serving the impressive individual portion.

There are five basic components to this dish: Chocolate, eggs, butter, sugar, and a small amount of flour. Some cooks variously add a hint of cinnamon, orange, ancho chili, or other flavorings. The eggs and sugar are first beaten together, then combined with the melted chocolate and butter, resulting in a denser texture. For a more ornate presentation, these rich treats are baked in small fluted brioche, baba, or Bundt molds. They puff up during cooking, then sink in the center. Because there is so little flour in the batter, the undercooked section in the center does not taste raw. The trick is not to overbake or you will have brownies rather than an oozing center; if underbaked, the cake will not properly unmold. An easier version also emerged by inserting a chocolate truffle in the center of a higher-flour batter.

Molten chocolate cakes are much lighter than a typical flourless chocolate cake. A relatively short time in the oven and underbaking means that the chocolate retains more volatile compounds, resulting in an incredibly flavorful treat. Use a good quality chocolate. The cakes are dusted with confectioners’ sugar and accompanied with a dollop of whipped cream or scoop of vanilla or coffee ice cream. For an elegant presentation, dust the serving plates with cocoa. 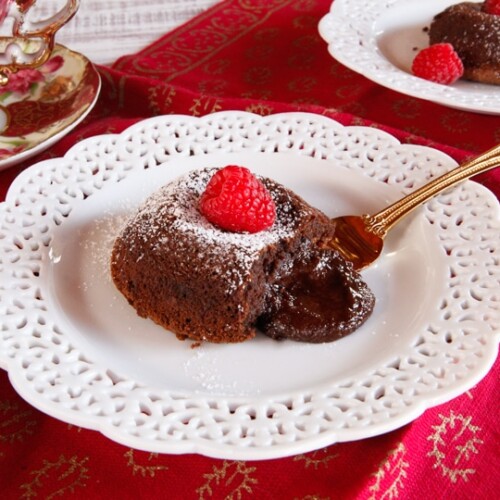 Nutritional information should be considered an estimate only; please consult a registered dietician, nutritionist, or your physician for specific health-related questions. Read more here. Please note that the recipe above is published using a recipe card plugin, with preexisting software which can auto-calculate metric measurements, as well as change the number of servings. Metric conversions and changes to the number of servings (resulting in different ingredient amounts) will only appear in the ingredient list, and are not changed within the step-by-step directions of the recipe.
216 shares
Mediterranean Tuna Hummus Crostini PREVIOUS