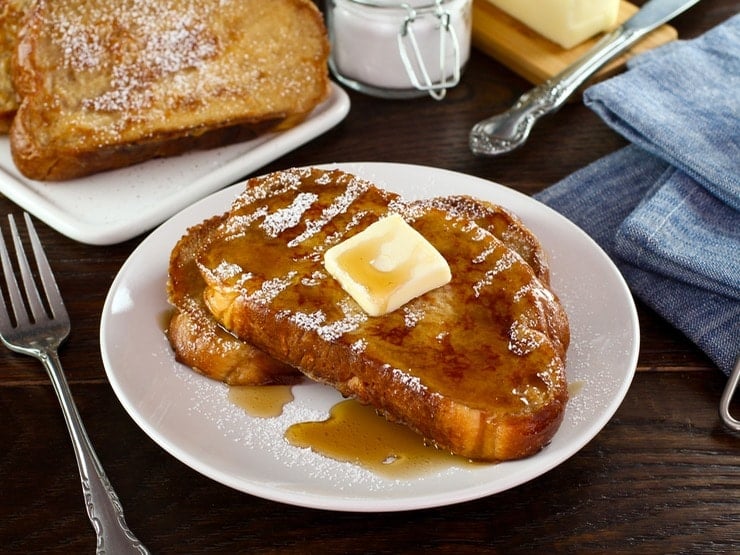 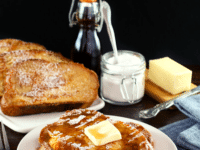 My favorite recipe for Challah French Toast is made with a secret ingredient– banana! The addition of a ripe banana to the coating adds healthy sweetness for a light and fluffy texture. The result is absolutely delectable. Challah and French toast are just meant to be together. 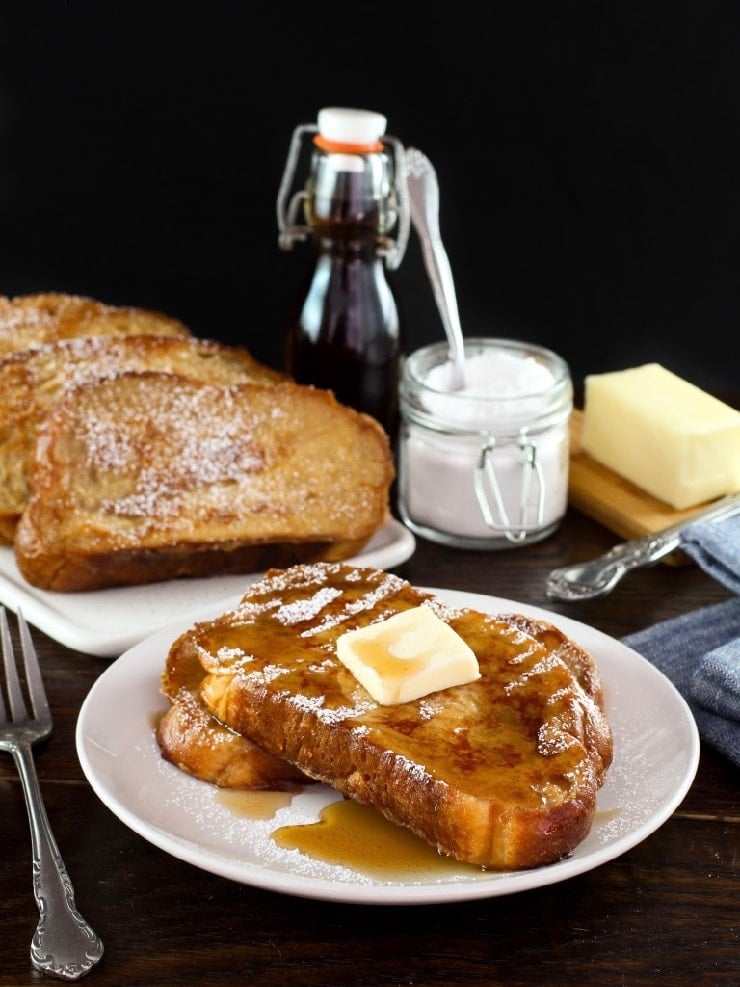 “I went to a restaurant that serves ‘Breakfast at any time.’ So I ordered French Toast during the Renaissance.” ~ Steven Wright

French toast is a weekend tradition in our family. It all began when I first tackled the art of making a beautifully braided challah. It took me countless tries of braiding and baking before I was happy with my technique. Those first few weeks of experiments resulted in copious amounts of challah piling up in our kitchen.

Luckily, my husband makes a mean French toast… and no bread is better suited to this sweet breakfast treat than eggy, fluffy challah bread. Challah acts like a sponge, soaking up the liquid mixture and saturating itself with goodness. My stepdaughter loves her Abba’s French toast, and she loves it even more when we use challah. What a treat!

The most basic form of French toast is bread soaked in milk and/or eggs, then fried. This simple cooking concept has been around since antiquity. There is a loosely similar recipe to French toast in the oldest known cookbook, Apicius, an Ancient Roman collection of recipes written in the early 5th century CE. Here is a translation of that recipe:

As you can see, the basic method for cooking French toast hasn’t changed much throughout the centuries. Eggs didn’t appear in a printed recipe until 1870. The practice of soaking bread and then frying it most likely came about as a way to use up bread that had gone stale to make it more palatable. Where the “French” name came from is not exactly clear; there are many theories, but the actual source of the name is a culinary mystery.

Our version of Challah French Toast is easy and versatile. We like to use homemade challah when possible. On the weeks when I am running short on time, we pick up a challah from our local bakery.  To make the milk mixture for the French toast thicker and naturally sweet, I add a banana and blend it together with a little flour. A touch of rum or Grand Marnier is optional, but tasty.

The resulting French toast is seriously amazing. It’s fluffy, airy, and not at all soggy. This preparation is much lighter than other recipes I’ve seen that drench the bread in cream, sugar, and butter. I much prefer to give the bread a rich flavor without a ton of sweetness and excess fat. That way, people can add as much syrup or butter as they want and adjust the sweetness to taste. It might not be “health food,” exactly, but it makes your soul happy… and we all deserve a little treat once in a while.

Speaking of treats, I think I might make “brinner” tonight. There is nothing we love more than serving breakfast for dinner, especially when the entree is a delicious batch of Challah French Toast. And because one of the best things about breakfast, brunch, and brinner is having salty and sweet foods on the same plate, I also like to serve this French toast with a side of my famous scrambled eggs. 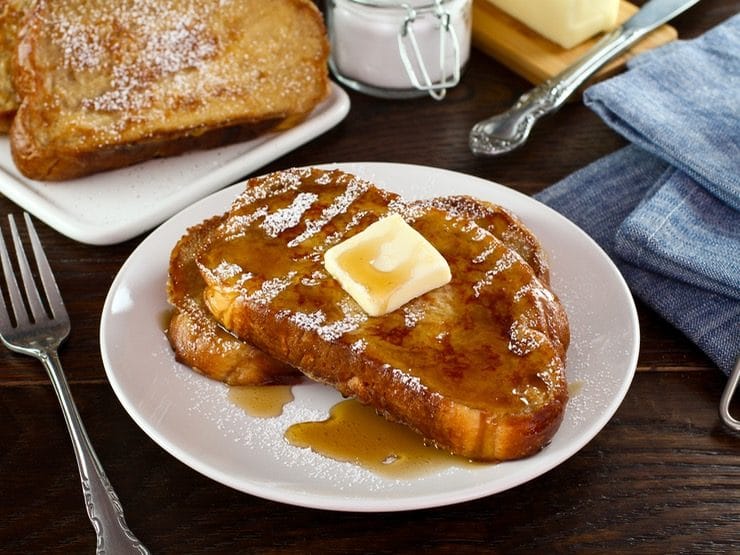 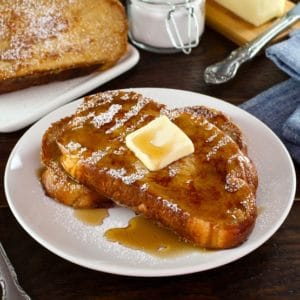 You will also need: large skillet (nonstick is best), blender, baking sheet (optional) Note: If you don't have challah on hand, you can substitute brioche or any fluffy, eggy bread you prefer. Serve Challah French Toast hot with your preferred toppings. Some of our favorites include butter, maple syrup, berry topping, caramelized bananas or fresh whipped cream.

Nutritional information should be considered an estimate only; please consult a registered dietician, nutritionist, or your physician for specific health-related questions. Read more here. Please note that the recipe above is published using a recipe card plugin, with preexisting software which can auto-calculate metric measurements, as well as change the number of servings. Metric conversions and changes to the number of servings (resulting in different ingredient amounts) will only appear in the ingredient list, and are not changed within the step-by-step directions of the recipe.
Quinoa Black Bean Burrito Bowls PREVIOUS

Olive Oil Mashed Potatoes with Garlic and Rosemary NEXT