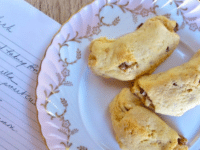 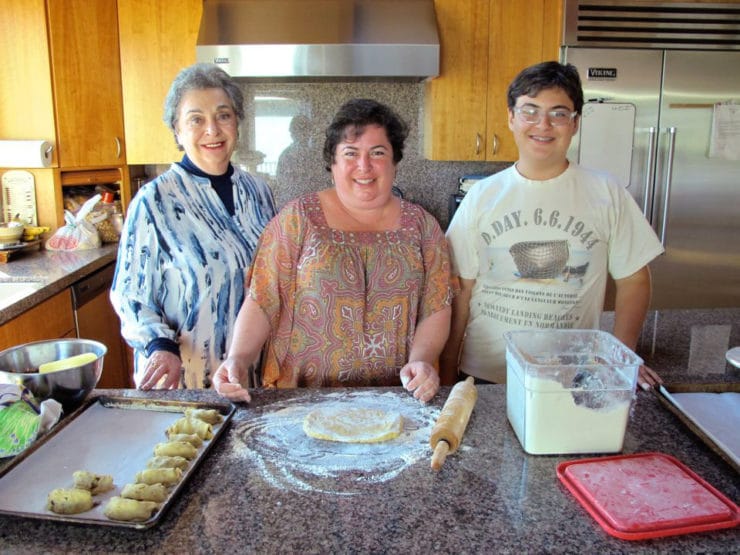 What makes a rugelach recipe “traditional”? Is it the dough or the filling? Is it how the rugelach is rolled and shaped? Which rugelach is the “right” rugelach? Every family’s answer will be slightly different, and they will all be right. Any recipe passed down through the generations can be considered traditional, no matter how different it might seem. Case in point– Erika’s “Unorthodox” Rugelach. They’re made with a pareve, delicate, dairy-free dough unlike many other recipes. They’re rolled the opposite way that rugelach is usually rolled. The filling is a loose combination of nuts, sugar, and raisins instead of the more common spreadable fillings. But none of that really matters. These rugelach are traditional for Erika, and when she bakes them for her family, they fill her kitchen with sweet memories.

My friend Erika Kerekes writes a fabulous cooking blog called opens in a new windowIn Erika’s Kitchen. She’s a multi-talented home cook, social media maven, and all around swell gal. Some of you might remember Erika’s opens in a new windowSmoked Paprika Chicken, which she shared with me a while back. Erika is single-handedly responsible for getting me hooked on smoked paprika, so you can thank her for inspiring the multitude of smoky recipes on my website. I recently asked her to share a family recipe with me. After bouncing some ideas back and forth, we settled on her grandmother’s rugelach. They aren’t like any rugelach I’ve ever made, but that’s what makes them special.

Erika’s maternal grandmother, Rose Chankin Sharron, made these rugelach once or twice a year in her little kitchen in Queens. She would make several batches, wrap them up and hand-deliver them to family members. Erika remembers her mom sticking them in the freezer to keep the family from eating them all at once. They soon discovered that the rugelach tasted really good frozen, too… which meant the cookies never lasted very long in their home. 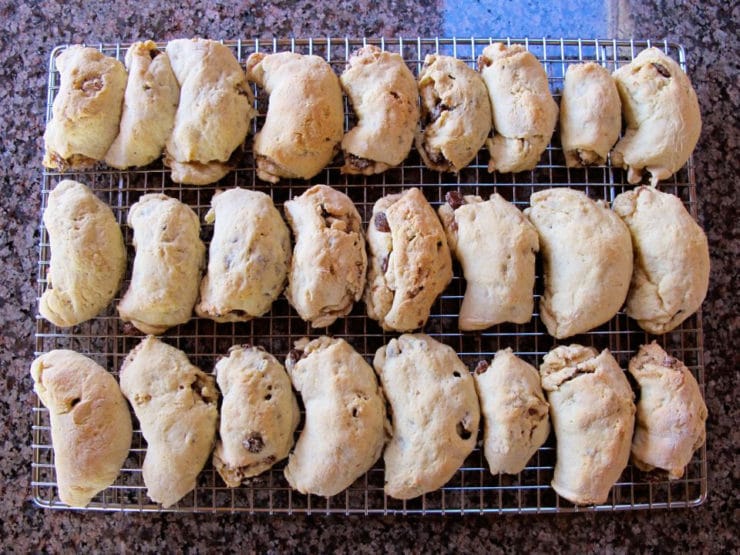 I visited Erika a few weeks ago for an afternoon of baking and “kibitzing” around the kitchen table. Her mom Susan Penzer was in town, and we were able to discuss the family history behind these cookies at length. I asked them about the roots of their beloved rugelach.

“The interesting thing is that I don’t think we know where this recipe came from,” Erika explained. “My grandmother’s grandparents– my great-great grandparents– had a bakery in Russia. My grandmother’s side of the family was from Smolensk, in Russia. My great-grandmother, who was not much of a home keeper in general, did not like to care for the family, but she did like to bake. So we assume that the recipes she had were from her parents who had the bakery, although we don’t know that for a fact.”

Erika told me that her great-grandmother came to the U.S. in the early 1900’s. Her grandmother Rose was born in America in 1912. Though Rose’s mother was not very domestic, Rose enjoyed cooking and baking. It seems like cooking is in Erika’s DNA; the talent of her bakery-owning ancestors has surfaced in various family members throughout the years. Erika’s mom Susan told me how Rose learned to cook after she got married:

“My father, who she met in high school, loved good food. His mother was an excellent cook. When he found out my mother couldn’t cook at all, he said she had to learn from his mother because he could not live like this. So my mother learned to cook from her mother-in-law, my paternal grandmother. Her name was Celia. This was in Brooklyn on Hinsdale Street.” 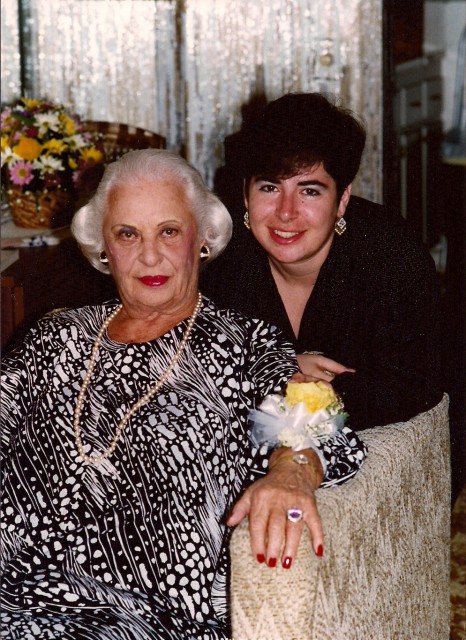 Nobody is quite sure where or when Rose learned the rugelach recipe, though it likely came from her mother’s side of the family (the Russian bakery owners). At some point, Rose began to substitute orange juice for sour cream in the rugelach dough. According to Susan, this was likely done for health reasons. Many of Rose’s recipes were approached from a low fat perspective. Susan explained why:

“When I was 11 my mother (Rose) went on a very strict diet through the NYC Board of Health to lose weight. Friends of hers and neighbors who admired what she had done asked if she could help them, so around her dining room table she would have 3 or 4 friends who she would teach weight loss to. The meetings became popular, and eventually we had a large basement that was full of folding chairs. 30-40 people would come to the class 5-6 times a week. At that point a woman named Jean Nidetch approached her, I think she may have come to her class or was with her at the board of health. Jean told her, ‘I’m thinking of starting a company that’s more than just neighborly things, I think it’s going to get big.’ My mother was interested, but when my father heard that she’d be busy nights and weekends he went crazy. So, she gave up her dreams and did not join Jean Nidetch. Jean’s company eventually turned out to be Weight Watchers.”

opens in a new windowOn Erika’s blog, she calls these cookies “Rose Sharron’s Unorthodox Rugelach.” I’ve renamed them “Erika’s Unorthodox Rugelach,” because it’s clear this cookie has become a celebrated tradition in Erika’s immediate family. On my visited I watched as she rolled the dough with care, gently pressing the loose filling into the center, then carefully slicing and shaping the cookies. As she worked, her son Emery came into the kitchen and watched the process. Emery has caught the cooking bug from his mother, which means that Rose’s rugelach will eventually be passed down to yet another generation.

While the cookies were baking, filling the air with sweetness, Erika took out a folder of photocopied handwritten recipes. Erika received the recipes when Rose passed away in 1996; she keeps them on a shelf in her kitchen. The famous rugelach recipe (spelled “Rogelach” on the recipe card) has only a list of ingredients, with no directions or even hints for the cooking process. 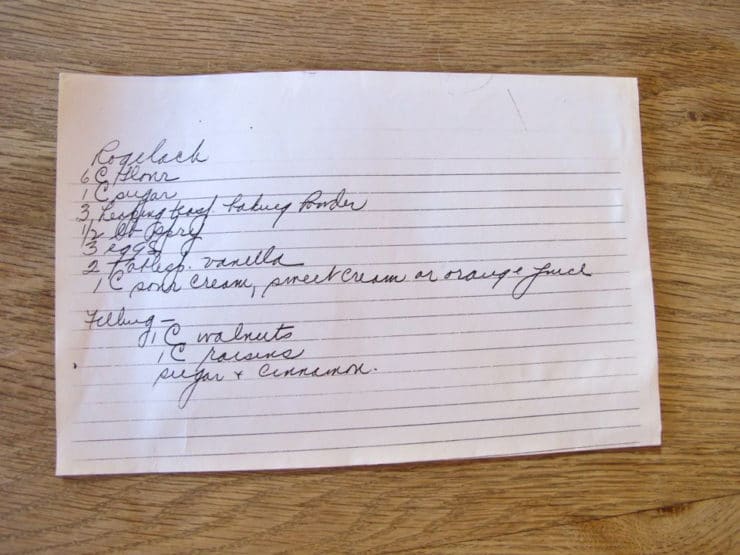 Erika only made these rugelach once with Rose while she was alive. After she passed, Erika struggled to recapture the method that would produce her grandma’s famous cookies. The lack of details on the recipe card made things difficult. Erika’s friend Anne helped her to troubleshoot the dough, which is very delicate and harder to work with than dairy-based rugelach dough. In the end, they were able to crack the code, and now Erika makes these rugelach for her family a few times a year.

As we sipped coffee and nibbled on freshly baked rugelach, we flip through the precious pile of photocopied recipes—kasha, meatloaf, blintzes. There is even a card with instructions for How to Clean Your House.

“I don’t take these out much,” Erika admitted. “My grandmother’s handwriting makes me cry.”

Grandma Rose’s spirit is alive and well in these unorthodox little cookies. Thank you to Erika of opens in a new windowIn Erika’s Kitchen for sharing the recipe, and her kitchen memories, with all of us.

opens in a new windowFood Processor

opens in a new windowRolling Pin 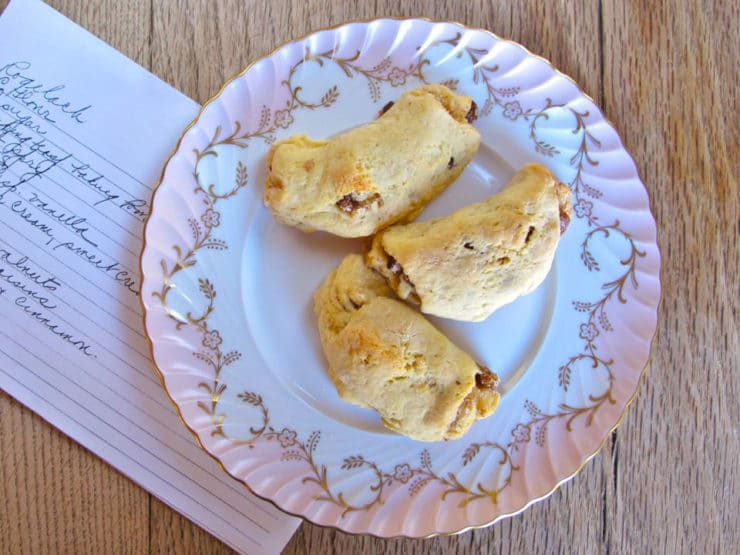 Nutrition Facts
Erika's Unorthodox Rugelach
Amount Per Serving
Calories 76 Calories from Fat 27
% Daily Value*
Fat 3g5%
Cholesterol 5mg2%
Sodium 3mg0%
Potassium 49mg1%
Carbohydrates 10g3%
Sugar 2g2%
Protein 1g2%
Vitamin A 15IU0%
Vitamin C 1.4mg2%
Calcium 11mg1%
Iron 0.5mg3%
* Percent Daily Values are based on a 2000 calorie diet.
Tried this recipe?Let Us Know How It Was In The Comments.
4.8 from 6 votes
Nutritional information should be considered an estimate only; please consult a registered dietician, nutritionist, or your physician for specific health-related questions. Read more here. Please note that the recipe above is published using a recipe card plugin, with preexisting software which can auto-calculate metric measurements, as well as change the number of servings. Metric conversions and changes to the number of servings (resulting in different ingredient amounts) will only appear in the ingredient list, and are not changed within the step-by-step directions of the recipe.
134 shares