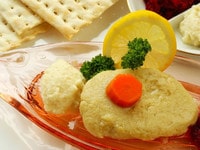 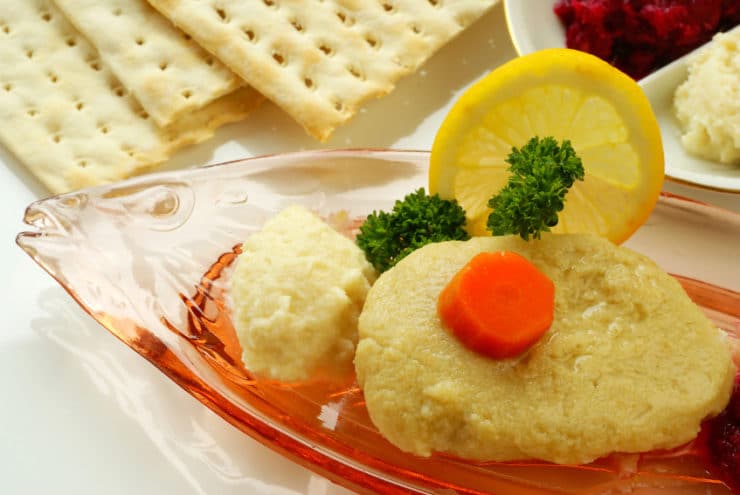 Well, it’s official– gefilte fish is going mainstream. A few weeks ago I heard about a new modern-day pushcart in Manhattan called  opens in a new windowGefilteria. They call themselves the “Purveyor of Boutique Gefilte,” and they serve up “artisanal” gefilte fish selections that are made from sustainable fish sources. Gefilte is also featured at  opens in a new windowKutsher’s Tribeca, a “modern American Jewish bistro” giving Ashkenazi fare a thoroughly modern treatment. A Manhattan extension of the famous Kutsher’s in the Catskills, the Tribeca bistro serves their gefilte fish with micro-greens and parsley vinaigrette. I haven’t had a chance to try either place yet, but next time I’m in New York you can bet I’ll be doing some taste testing.

In my experience, I’ve found that gefilte is one of those dishes you either love or hate– there doesn’t seem to be much middle ground. I fall on the side of loving it, but only when it’s really well made. My husband’s mom created a delicious (if time consuming) gefilte fish recipe that is out of this world. A reflection of her husband’s Ashkenazi background and her own Sephardic ancestry, her gefilte is gently seasoned and stuffed into a fillet of fish. I’ve hesitated to blog about it, because I’m just not sure how many people like gefilte. I don’t really like overly sweet gefilte fish, and I’m not a big fan of the stuff in the jars. But a good homemade gefilte is something truly delicious– light, clean, fresh, with just a hint of sweetness. That’s the kind of gefilte I go for.

I’m curious to hear your feedback. Are you a fan of gefilte fish? Is it something you only eat on holidays, or do you enjoy it year-round? Does the site of gefilte make you run in the other direction? What do you think of this “artisanal gefilte fish” trend– is there something to be said for updating a centuries-old food concept? Comment below and let me know what you think!

To read more about the gefilte fish trend, check out these links:

opens in a new windowGefilte Fish Goes Glam: Where to Get Fancy Ground Fish

opens in a new windowThe Gentrification of Gefilte

opens in a new windowGefilteria: Upscale Fish Without the Fuss