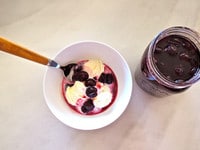 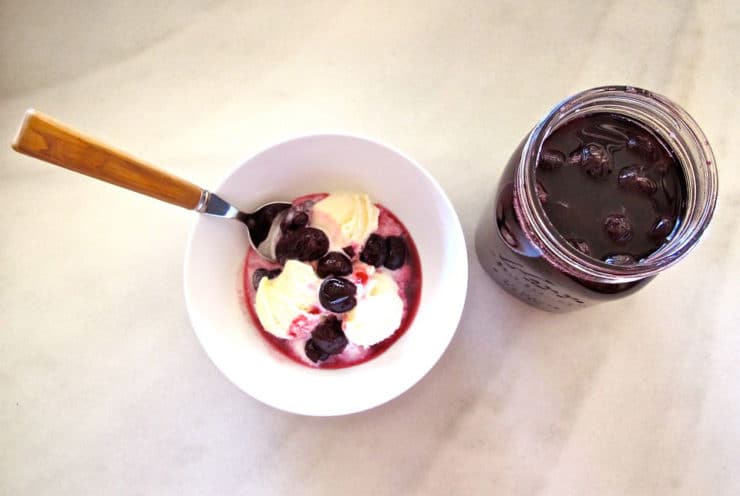 My patriotic side is officially kicking into high gear. This week I dug out a historical American manuscript that I’ve wanted to read for a while now. It’s the family cookbook of Martha Washington, our country’s very first “First Lady.” The long and somewhat cumbersome title of the manuscript is:

Martha Washington’s Booke of Cookery and Booke of Sweetmeats: being a Family Manuscript, curiously copied by an unknown Hand sometime in the seventeenth century, which was in her keeping from 1749, the time of her Marriage to Daniel Custis, to 1799, at which time she gave it to Eleanor Parke Custis, her granddaughter, on the occasion of her Marriage to Lawrence Lewis.

For our purposes, we’ll simply call it Martha Washington’s Booke of Cookery.  🙂 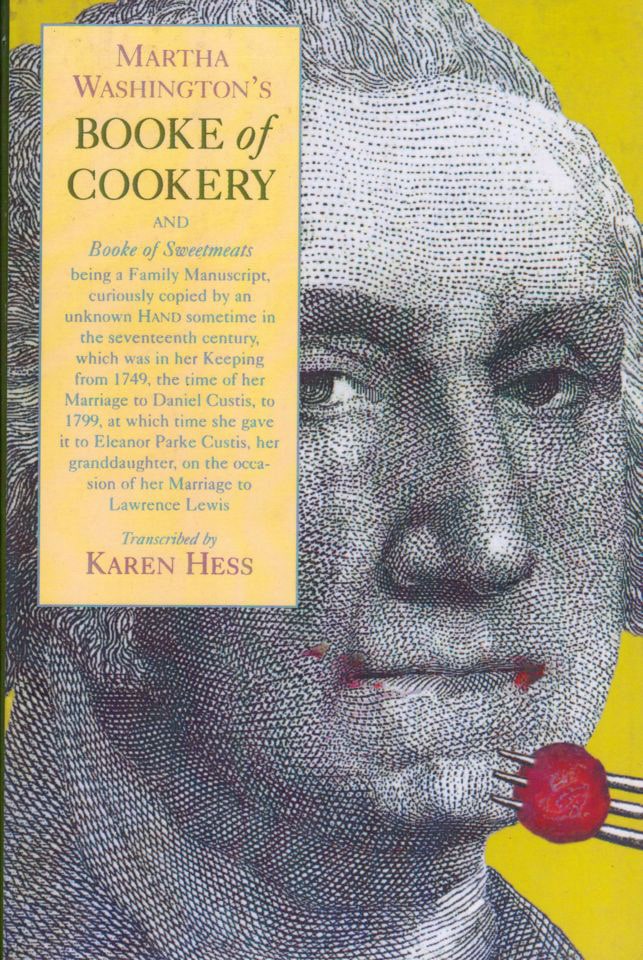 In its most recent form, the manuscript has been wonderfully interpreted and transcribed by Karen Hess, a noted American culinary historian. The manuscript contains two books—the first is called the Booke of Cookery, the second is called the Booke of Sweetmeats.  It’s a fascinating look at early American cooking, and Karen’s insight into the time period is invaluable in helping us understand the context of the recipes.

Martha Washington was born Martha Dandridge, the eldest daughter of a Virginia plantation owner named John Dandridge. At 18 years old, in 1749, she married a wealthy planter named Daniel Parke Custis who was two decades her senior. She was given this cookbook manuscript during the first year of her marriage, presumably as a wedding gift. 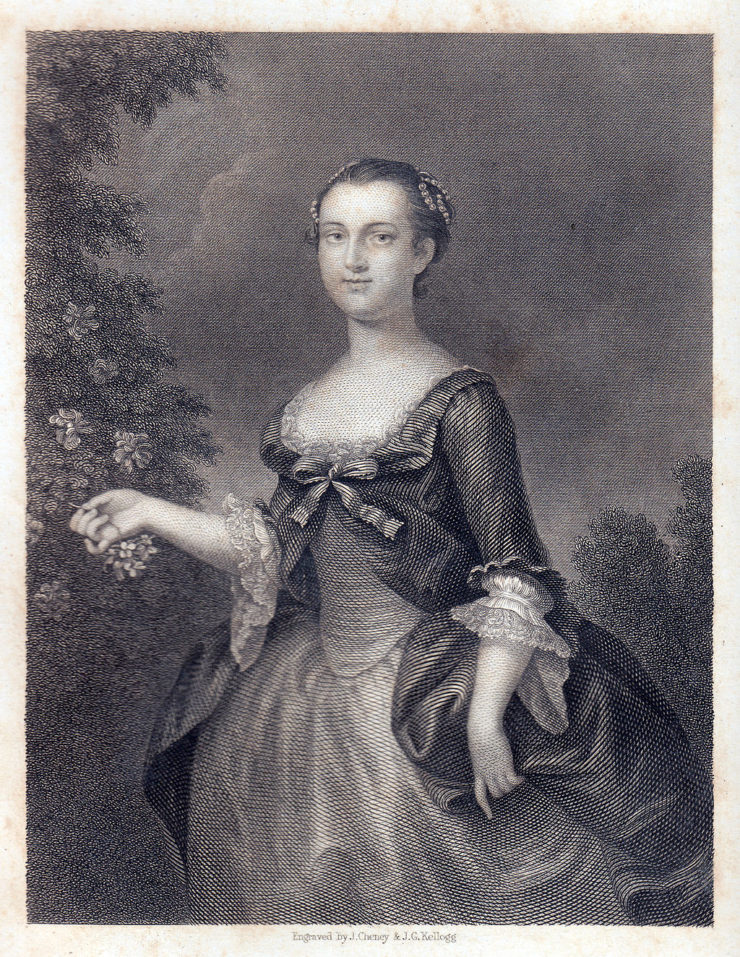 Martha’s husband Daniel died in 1757. This left Martha a very wealthy widow. Two years later, at the age of 27, Martha married George Washington in a grand wedding in Virginia. After their marriage, she became known as Lady Washington, and the couple moved to Washington’s estate in Mount Vernon. Their marriage was, by all accounts, a solid and happy one. In fact, Revolutionary soldier General Lafayette once remarked that Martha “loved her husband madly.”

Martha and George never had any children of their own, but Martha did have four children with her first husband John; their names were Daniel, Francis, John (Jacky), and Martha (Patsy). Daniel and Frances died in childhood, while Jacky and Patsy only survived to young adulthood. Patsy died of a seizure at 17 years old. Jacky married and had two children before his death in 1781 at the age of 26. Martha and George raised Jacky’s children after his death. Martha eventually handed down the cookbook manuscript to Jacky’s daughter, her only granddaughter, Eleanor Parke Custis. 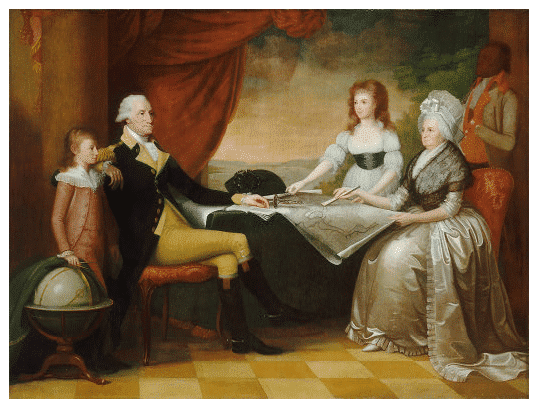 There are many, many recipes to try here (over 500), so I’m sure I’ll spend lots of time exploring the book. This week, I decided to try cooking something with cherries. Why? Well, when I think about our first president, that old apocryphal story about George cutting down the cherry tree comes to mind. While this might be one of the most famous stories about Washington’s childhood, it’s also a myth. It was an invention of a nineteenth century preacher and book peddler, Mason Locke Weems. The cherry tree story first appeared in his book, The Life and Memorable Actions of Washington, which was originally published in 1800, a year after Washington’s death. In the story, Washington is about six years old. As he is playing with his hatchet, he accidentally cuts down a young English cherry tree in the garden. Here is how the story unfolds, according to Weems…

George, said his father, do you know who killed that beautiful little cherry-tree yonder in the garden? This was a tough question; and George staggered under it for a moment; but quickly recovered himself: and looking at his father, with the sweet face of youth brightened with the inexpressible charm of all-conquering truth, he bravely cried out, “I can’t tell a lie, Pa; you know I can’t tell a lie. I did cut it with my hatchet.”–Run to my arms, you dearest boy, cried his father in transports, run to my arms; glad am I, George, that you killed my tree; for you have paid me for it a thousand fold. Such an act of heroism in my son, is more worth than a thousand trees, though blossomed with silver, and their fruits of purest gold. 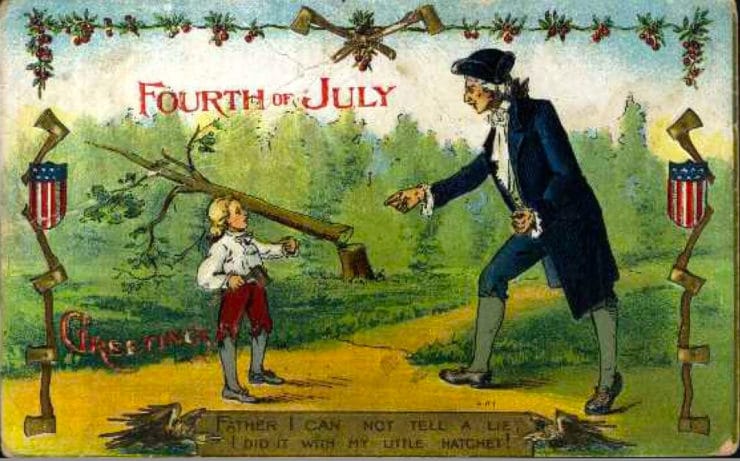 Sweet story… however, most historians agree that it likely never happened. However, George Washington did have a particular fondness for cherries (and fish, too)! No big surprise, then, that Martha Washington’s Booke of Cookery has several recipes for cherries, including methods for making cherry preserves, cherry wine, and cherry paste (fruit leather).

For today’s blog, I chose a recipe that is the historical equivalent of preserving cherries in heavy syrup. It does not make a spreadable jam or jelly; rather, it extends the shelf life of the cherries so that they can be consumed or used in recipes. Sugar has been used to preserve fruit for centuries. Sugar-preserved cherries can be used as a topping for ice cream, blintzes, or cheesecake. They can be used as part of a pie filling or blended to make jam. You can thicken the juice with a little cornstarch dissolved in water to make a yummy sauce for cake or bread pudding. The syrup that forms during the boiling process has a lovely flavor, which can be used to sweeten beverages. Preserved cherries make a great substitute for less healthy maraschino cherries (which contain food dyes and preservatives), and may be added to cocktails whenever a maraschino is called for. The syrup can even be added to Coca-Cola to make homemade Cherry Coke. 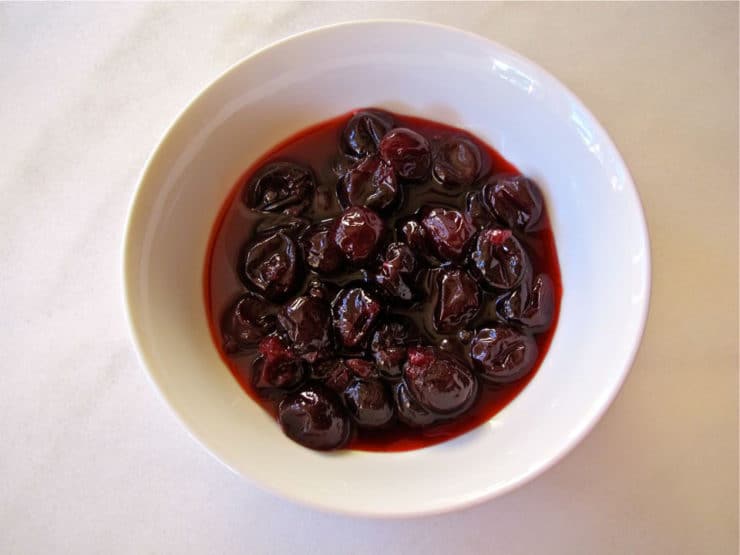 Here is the original recipe as it appears in the second part of the Cookery manuscript, A Book of Sweetmeats:

Take 2 pound of faire cherries & clip of the stalks in ye midst. then wash them clean, but bruise them not. then take 2 pound of double refined sugar, & set it over ye fire with a quart of faire water in ye broadest preserving pan or silver basen as you can get. Let it seeth till it be some what thick, yn put in yr cherries, & let them boyle. keepe allwayes scumming & turning them gently with a silver spoon till they be enough. when they are cold, you may glass them up & keep them all the year.

Karen Hess did not really “translate” this particular recipe in the book, so I used other recipes she broke down as examples. This one was pretty self-explanatory, and it produced a delicious result. Yes, it’s a lot of sugar, but these cherries aren’t meant to be eaten in large numbers. Rather, they should be added sparingly to desserts and drinks as a way of enhancing their flavor. Enjoy!

Note: If you plan to can these cherries for a long shelf life without refrigeration, you will need to follow a sterile canning process. Click here for details. Or, you can simply store your cherries in a jar in the refrigerator. 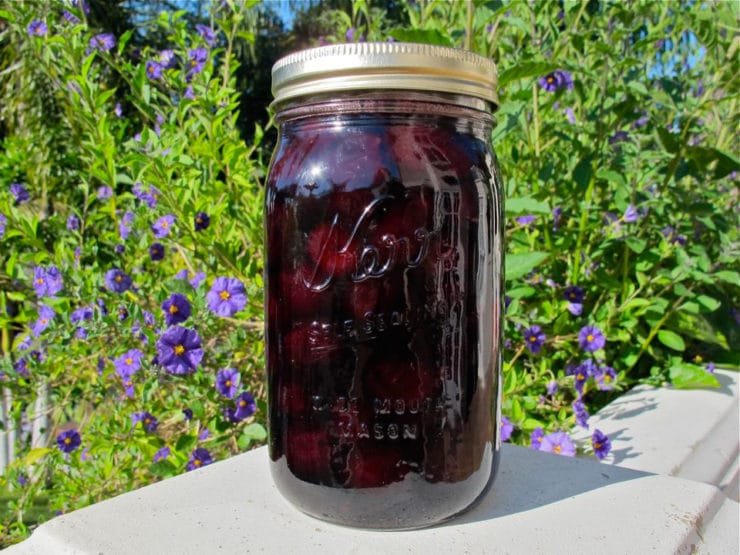 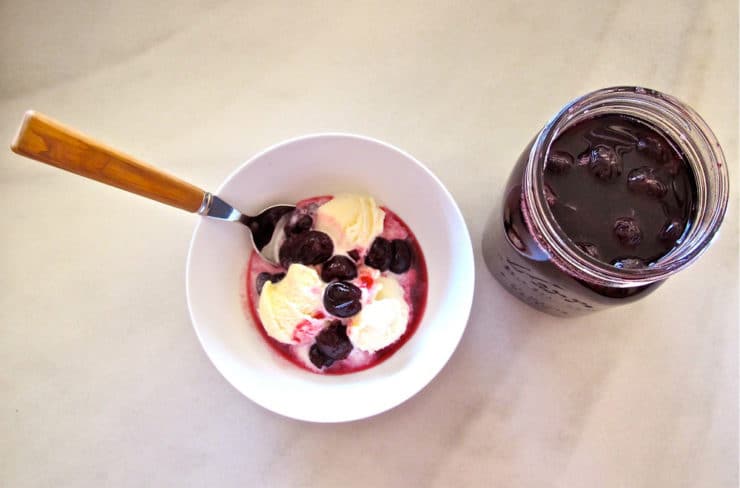 Nutrition Facts
Martha Washington's Preserved Cherries
Amount Per Serving
Calories 1020
% Daily Value*
Sodium 14mg1%
Potassium 503mg14%
Carbohydrates 263g88%
Fiber 4g17%
Sugar 255g283%
Protein 2g4%
Vitamin A 145IU3%
Vitamin C 15.8mg19%
Calcium 37mg4%
Iron 0.9mg5%
* Percent Daily Values are based on a 2000 calorie diet.
Tried this recipe?Let Us Know How It Was In The Comments.
4.7 from 10 votes
Nutritional information should be considered an estimate only; please consult a registered dietician, nutritionist, or your physician for specific health-related questions. Read more here. Please note that the recipe above is published using a recipe card plugin, with preexisting software which can auto-calculate metric measurements, as well as change the number of servings. Metric conversions and changes to the number of servings (resulting in different ingredient amounts) will only appear in the ingredient list, and are not changed within the step-by-step directions of the recipe.
624 shares