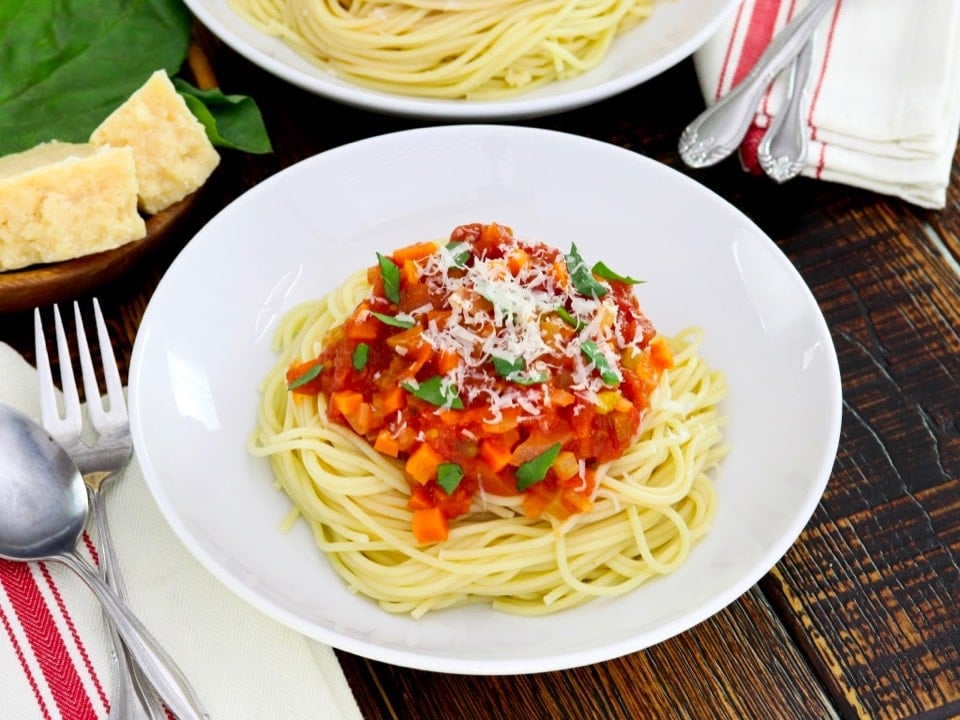 Learn about the childhood of Audrey Hepburn and try her favorite recipe, Spaghetti al Pomodoro, which she learned while living in Italy.
999 shares
5 from 3 votes
Jump to Recipe Email Me Recipes 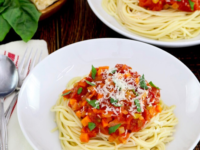 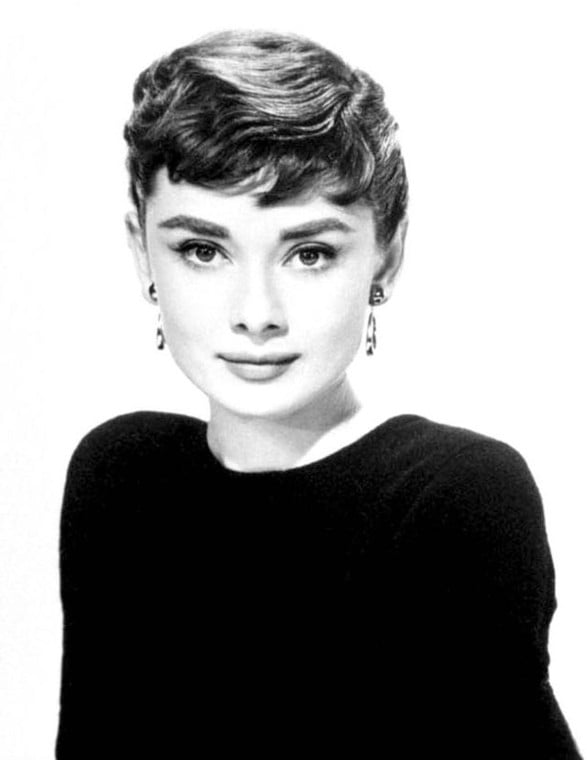 “Audrey Hepburn is a biographer’s dream and nightmare simultaneously. No other film actress was so revered – inspired and inspiring- both for her on-screen appearances and for her passionate, off-screen crusade. She remains so beloved that virtually no one has a bad word to say about her. The worst thing she ever did, it seems, was forget to mention Patricia Neal at the 1964 Oscars. She left no lurid secrets or closet cruelties to be exposed. Beneath her kind, warm surface lay more kindness and warmth to the core.”

Many words come to mind when one hears the name Audrey Hepburn – elegant, beautiful, sophisticated, chic, and classic, just to name a few. From the moment she first appeared on the big screen, Audrey captivated audiences with her charm. Her appeal continues to inspire audiences even today, years after her passing. We know her as the star of films like Breakfast at Tiffany’s, Roman Holiday and Funny Face, but beneath her celebrity exterior she was a true humanitarian. Like the little black dresses she wore so well, Audrey Hepburn will never go out of style.

It may be surprising to learn that this poised, elegant, worldly movie star came from very humble beginnings. On May 4, 1929 Audrey was born Audrey Kathleen Ruston in Brussels, Belgium. Hepburn was added years later when the name was found in documents belonging to her father’s ancestors. Though her mother was Dutch, her parents were both considered British by law; because of this, her family traveled between London, Brussels and the Netherlands often. Audrey’s father left her mother in 1935 when Audrey was only 6 years old, an event that she described as the most traumatic of her life. When England declared war on Germany, Audrey’s mother made the decision to move her family to Holland in hopes that the country would remain neutral throughout the war. When asked about the inspiration behind her work with UNICEF, an organization to which she dedicated many years of her life, Audrey recalled her experience during the war and the hardships she watched her family and friends endure. Food was scarce and at times the only things available to eat were tulip bulbs, dog biscuits and green bread made from a sort of pea flour. When liberation finally came, an organization that would later become UNICEF arrived with clothing, medicine and food for Audrey’s family and the surrounding community. This experience helped to motivate her charitable work in later years. 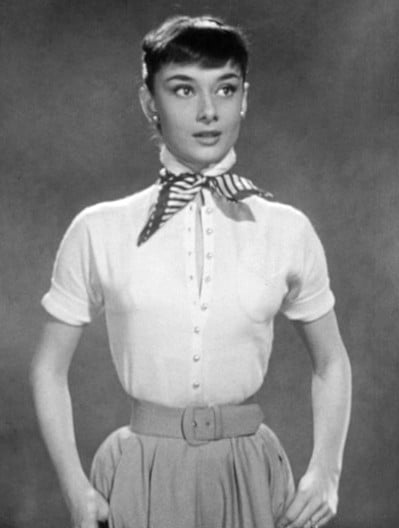 At an early age Audrey fell in love with ballet, but the wartime years she spent suffering malnutrition made it impossible for her to keep up with the physical toll of professional dance. When she decided to move on from her dream of becoming a prima ballerina, she turned to modeling and acting. Audrey credits her breakthrough moment as an actor to the French writer Collette (Sidonie-Gabrielle Colette), who cast Audrey in her stage play Gigi after seeing her on a beach in the South of France. Shortly after her debut in Gigi, the production chief of Paramount’s London offices suggested to the American offices that Audrey screen test for the lead role in Roman Holiday. The studio fell in love with Audrey (no big surprise there!), and the rest is Hollywood history. Audrey would go on to star in many beloved classic films including Sabrina, Funny Face, My Fair Lady and Breakfast at Tiffany’s. She also received five Academy Award nominations and two wins, one for her role in Roman Holiday and one Jean Hersholt Humanitarian Award, received posthumously and accepted by her son Sean Hepburn Ferrer.

Though Audrey was notoriously slender, she did enjoy eating and cooking. In his book Audrey Hepburn, An Elegant Spirit Audrey’s son Sean writes that she stayed thin by keeping active and eating single servings during meals, never helping herself to seconds. Over the years she began eating meat in limited portions. She also believed that your meal should always include a colorful combination of food, saying: “It isn’t very interesting to eat a plate full of white, therefore it can’t be very good for you either.” This style of eating typically included something from each food group and became her approach to a healthy diet. Audrey also avoided snacking and rarely indulged in sweets, apart from a single piece of chocolate after her afternoon nap. Chocolate, she claimed, chased away the blues. Sean says that his mother ate pasta once a day and that she had an affinity for Italian food, likely due to her time spent living Rome. She taught him that the secret to Italian cuisine came from quality ingredients. 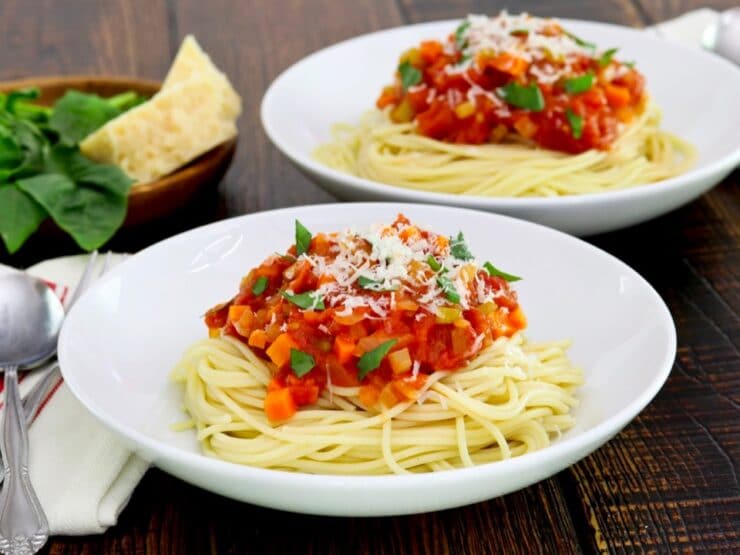 In honor of Audrey’s birthday, I whipped up a recipe for her favorite Italian dish–spaghetti al pomodoro– which Audrey ate at least once a week. According to her son, Audrey preferred her pasta “absolutely swimming in sauce,” so you may notice that the recipe produces a fairly large amount of tomato goodness. Be sure to use Italian tomatoes and fresh, high quality ingredients as Audrey would have done. Serve this for dinner and enjoy your own little Roman Holiday. For dessert I suggest vanilla ice cream topped with maple syrup, another of Audrey’s favorites. 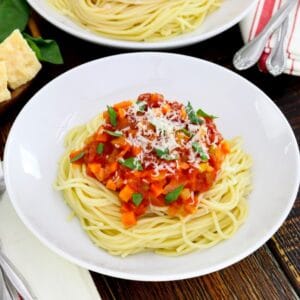 Nutritional information should be considered an estimate only; please consult a registered dietician, nutritionist, or your physician for specific health-related questions. Read more here. Please note that the recipe above is published using a recipe card plugin, with preexisting software which can auto-calculate metric measurements, as well as change the number of servings. Metric conversions and changes to the number of servings (resulting in different ingredient amounts) will only appear in the ingredient list, and are not changed within the step-by-step directions of the recipe.
999 shares
Moroccan-Style Vegetable Couscous PREVIOUS