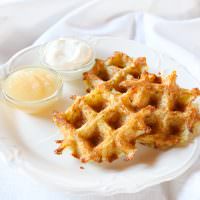 You will also need: hand grater or food processor with shredding disc attachment, clean tea towel or layers of cheesecloth, colander, large mixing bowl, waffle iron, broiler (optional) I like them served with sour cream and applesauce, latke-style, or topped with scrambled eggs or a poached egg.