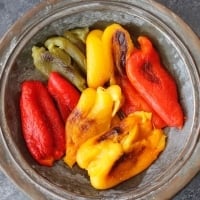 How to Roast Bell Peppers

For All Methods You Will Need

For Oven Roasting Method You Will Need

For Stovetop Roasting Method - Direct or Grill Pan You Will Need

For Flame Grill Roasting Method You Will Need

Seeding and Peeling Your Peppers

You may also use a grill pan on your stovetop, which makes for a much easier cleanup. A grill pan will protect your stove from the drips of roasted pepper juice. Here is the one I use: https://www.amazon.com/gp/product/B002W2Q4OK/?tag=theshiintheki-20 If you want to store the peppers short term, put them in a sterile glass jar and cover them with olive oil. Cap the jar tightly and refrigerate. If you don't plan on using them within a few days, pressure can them: https://toriavey.com/toris-kitchen/pressure-canning/ or freeze the roasted pepper strips in sealing bags (reusable or disposable)... they actually hold up well to freezing and retain much of their flavor when thawed.