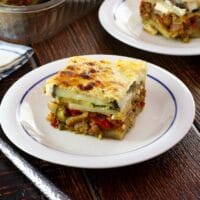 You will also need: Medium saucepan, 2 baking sheets, medium bowl, sauté pan, paper towels, whisk, large baking dish or pan (9x13) TIME SAVING NOTES: This moussaka takes quite a bit of time to prepare, but you can cut down the prep time substantially with a few simple modifications. Buy jarred roasted peppers so you don't need to roast them yourself and buy pre-steamed or canned lentils. Prep all of your vegetables in advance and have all of your items ready to assemble for both the moussaka and the sauce; pausing to hunt for or measure an ingredient every few minutes will increase your cooking time quite a bit. The better you are organized from the beginning, the faster the process will be!