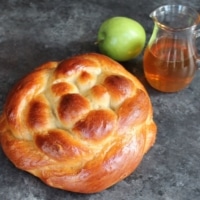 You will also need: Large mixing bowl, whisk, medium saucepan, food processor, rolling pin (optional), baking sheet, parchment paper, pastry brush Yield: Two 2-Lb loafs, 24 servings (2.66 oz per serving) Notes: Since I first posted this recipe, I have updated the number of servings and serving size to reflect a more nutritionally healthful portion size (it used to read 16 servings but that made for a whopping 4 ounce serving size - about double what is recommended). I have also updated the oil to avocado oil, which works just like canola (previously recommended) but is much more healthy.  1/4 ounce active dry yeast = 1 packet