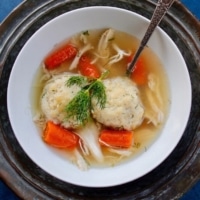 You will also need: 10 quart pot (or larger), another large pot or bowl with at least 6 quart capacity, large mesh strainer, cutting board, medium mixing bowl, mortar and pestle (only needed if using saffron). If your pot is 8 quart (a standard large size), you should use a 3 pound chicken. The pot will be very full during the initial cooking phase, and this recipe will not make quite as many servings using a smaller 3 pound chicken. A larger stock pot (12 quart is my preference) is a good investment if you plan on making a lot of homemade soup and stock.  Matzo Ball Recipes For Floater Matzo Balls (my preference), click here. For Sinker Matzo Balls, click here. For Gluten Free Matzo Balls, click here. Serving Size: 1 1/2 cups. Using a 4 pound chicken, soup pot makes roughly 14 cups of stock, 4 cups shredded chicken, and 6 cups vegetables (if using). Recipe makes roughly 12 servings without vegetables, or 16 servings with vegetables. Nutrition is calculated using 1 tablespoon of kosher salt, with vegetables, for 16 servings. Nutritional info only relates to the chicken soup recipe that appears here. Each matzo ball recipe has its own nutritional information, follow the links above for more information. Make Ahead: You can make this chicken soup up to 3 months in advance. After cooling to room temperature, it can be frozen in a freezer-safe container, then thawed and reheated before serving. Like the soup recipe, matzo balls can also be made ahead and frozen for ease of preparation. Freezing instructions are provided at the matzo ball recipe links above. Be sure to freeze matzo balls separately from the soup and broth. They can be thawed and reheated directly in the hot soup (or a pot of soup stock) just before serving.