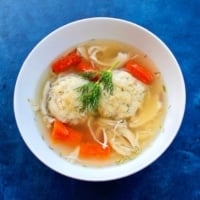 How to Freeze Matzo Balls

For the chicken soup recipe to accompany these matzo balls, click here. You will also need: 6 quart stock pot with tight-fitting lid, medium and small mixing bowls, plate. If you're not using baking powder, you'll need two medium mixing bowls, a small mixing bowl, and an electric hand mixer for whipping egg whites. If making ahead and freezing, you'll need a small baking sheet, plastic wrap, and a large freezer-safe bag or two. Makes roughly 24 matzo balls. Nutrition calculated for one single matzo ball. Generally you would serve two 1-inch balls in one standard bowl of soup. If you don't have chicken stock on hand and don't want to make a batch, you can make do with a simple water stock made with 5 quarts of water, 1/4 tsp saffron threads (choose an expensive brand, the cheap ones have no flavor), and kosher salt. Crush the saffron in a mortar/pestle, then add the powder to the pot of water - swirl a little water into the mortar to make sure you get all the saffron into the pot. Add kosher salt (start with around 2 tsp). Bring pot of water to a simmer, taste, and add more salt to taste - it should be pleasantly salty. Remember, this liquid will be soaked up by the matzo balls, so you want it to have some flavor. Feel free to add aromatic herbs to the water in a cheesecloth bundle (thyme, bay leaf, and oregano are nice). A garlic clove can enhance the flavor as well. Use this liquid to simmer your matzo balls. It won't be as flavorful as chicken stock, but it will give your matzo balls a lot more "oomph" than simple salted water - plus they'll take on a nice yellow hue.  A word about baking powder: If making this recipe for Passover, for the easiest preparation and nicest "floater texture," you can use a kosher for Passover baking powder (like this one). Some choose not to use baking powder because it doesn't jibe with the "spirit" of the Passover holiday, since it is an artificial, non-grain-based form of leavening. Others have no problem using baking powder, as long as it has a kosher for Passover hechsher. And others don't worry about it at all. The choice to use baking powder is a matter of tradition and preference. If your tradition doesn't allow it, please use the instructions for making Floater Matzo Balls Without Baking Powder outlined below. If you're not using baking powder, I recommend using avocado or safflower oil instead of schmaltz. They are lighter oils and will render a fluffier result, though it won't be quite as flavorful.  Both preparations here will give you a soft, pillowy-textured matzo ball that floats as it cooks - the baking powder ones are slightly more cloud-like and smooth. Use whatever works for your family!