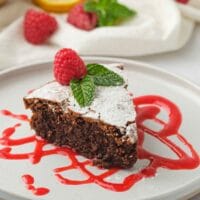 You will also need: 9 or 10-inch spring form (recommended) or cake pan, parchment paper, electric mixer Notes: This cake can be stored for up to 3 days in the refrigerator in an airtight container. Store coulis in a separate sealed container. Be sure to dust the cake with powdered sugar and decorate just before serving for best presentation. If making parve/dairy free, you may substitute dairy-free butter (margarine), dairy free bittersweet chocolate, and unsweetened almond milk for the dairy ingredients. If making for Passover, make sure all ingredients are approved Kosher for Passover. If you can't find Passover powdered sugar (aka confectioner's sugar), you can make your own by combining 2/3 cup sugar with 1 tsp potato starch in a blender - then blend on high speed until powdery.