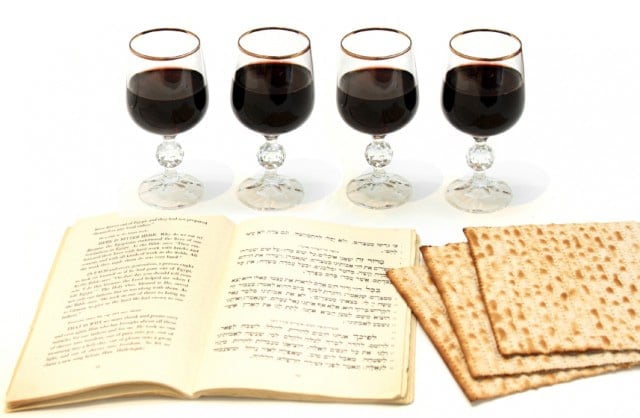 I put together this simple guide to help you better understand what foods are considered Kosher for Passover and to make sure your Passover seder runs as smoothly as possible! The jewish holiday of Passover is observed for seven days in Israel and eight days in the Diaspora. During Passover, the Jewish kosher food laws become a lot more challenging. Leavened and fermented grain products are prohibited to commemorate our freedom from Egyptian slavery. When the Jews escaped Egypt (led by Moses), they didn’t have time to let their breads rise before going into the desert. Because of this, any type of leavened bread or bread product is prohibited during Passover. These leavened products, known as chametz, include certain grain-based foods like breads, pasta, pastries, breadcrumbs, crackers, etc. Unleavened bread, aka “matzo,” traditionally takes the place of chametz during Passover.

What foods are forbidden during Passover?

During Passover, the basic kosher guidelines apply, and there are also additional restrictions to what can be eaten. Here is a quick rundown of the basic kosher laws, which apply year-round to Jews who choose to keep kosher:

Certain meats may not be eaten. Forbidden meats include (but are not limited to): pork, shellfish, lobster, shrimp, crab, rabbit, and seafood without fins or scales (like swordfish and sturgeon). Also, any products made with ingredients from these meats (example—pig ingredients in non-kosher gelatin) cannot be used.

Meat must not be eaten in combination with dairy. So, no cheese, butter, or cream sauce on your beef or chicken dish.

Fish and eggs are considered neutral. They can be served with dairy or with meat.

For more details on these basic kosher restrictions, click here.

In addition to the regular kosher laws, the Passover holiday has some special restrictions. There are two major Jewish groups in the world, Ashkenazi and Sephardi. When it comes to Passover, Ashkenazi Jews and Sephardic Jews have very different food traditions. All Jews, both Sephardic and Ashkenazi, prohibit the eating of chametz during Passover as directed in the Torah. Chametz includes any food product or recipe made with the following grains:

Chametz includes grains like wheat, oats, rye, barley and spelt, which are prohibited if they’ve had contact with water/moisture for longer than 18 minutes, leading to rising or “leavening.” Leavening agents, like yeast and sourdough, are also considered chametz.

You might be thinking– but, isn’t matzo made from wheat flour? Yes! Most matzo is made from wheat, but the process used to “cook” the matzo from the time liquid is added to the flour to the time the matzo is baked can last no longer than 18 minutes. The wheat is closely supervised to ensure that no water touches it from the time of harvest to the time it is baked. This is to make sure that no leavening occurs.

This is all technicality, and it may seem confusing to somebody who is new to keeping kosher for Passover. The most important thing you need to remember is that grain-based products… even beer!… are generally not considered kosher for Passover. Matzo, matzo meal, and matzo cake meal are used as substitutes for bread, bread crumbs, and cake flour, respectively.

When can you eat chametz after Passover?

Passover officially ends at sundown on the final day. After this time it is acceptable to bring chametz back into your home and to consume it.

Sephardic Jews do consume kitniyot during Passover. They are, however, careful about ingredients co-mingling. In the Middle East, it’s not uncommon to see Sephardic women sifting through bags of rice and lentils repeatedly, going through grain by grain to ensure no chametz is mixed in. While you won’t generally see kitniyot dishes at an Ashkenazi Seder, they are quite common at Sephardic Seders. Kitniyot items include:

Most Jews in America do not consume kitniyot during Passover. So, unless you’re absolutely sure that the people at your Seder observe Sephardic traditions, it’s safest to avoid cooking any kitniyot items during the Passover holiday.

In addition to these restrictions, many Jews avoid eating lamb during Passover because of the paschal sacrifice and Passover symbolism of the lamb shank bone. Some Jews also avoid garlic, though this is more rare. Neither of these rules are observed universally, however.

What bread is used for Passover?

Great question! Matzo is the closest thing to bread that can be consumed during Passover. Obviously matzo meal, matzo cake meal, matzo farfel and any other form of matzo is also considered kosher for Passover. The consumption of matzo is encouraged since it is a symbolic food. Beyond that, there are many food options available. Here is a list of foods you can eat during Passover:

So… what else can I eat on Passover?

– Any kind of fruit

– Any kind of vegetable, excluding those listed under kitniyot

– Beef, chicken, turkey, duck, goose, or fish with scales. If keeping strictly kosher, the meat must be kashered by a kosher butcher or sold as a kosher cut of meat.

– Many dairy products, like cheese and yogurt, are acceptable when they are not mixed with additives (like corn syrup). Dairy products cannot be mixed with meat. If you’re strictly keeping kosher, always look for a Passover kosher hechsher.

– Quinoa While somewhat controversial, most sources agree that quinoa is not technically a grain, and therefore it is permissible on Passover.

– Spices. Note that I do not consider spices like cumin and coriander to be kitniyot, so they may appear in Ashkenazi categories throughout the site.

– Herbs. Especiallyl bitter herbs like horseradish and romaine lettuce, which symbolize the bitterness of slavery.

– Gebrokts – The word gebrokts translates from Yiddish to “broken,” and it has come to mean “wet matzo.” A small minority of kosher Jews (mostly chassidic) will not mix water with cooked matzo during the Passover holiday. The custom arrises from the concern that a small amount of flour may still exist on the matzo after baking, resulting in chametz when the flour makes contact with liquid. This means they will not cook with matzo or matzo meal, or make dishes like matzo ball soup. For the purposes of this website, most of the Passover recipes will not work with those who keep the gebrokts tradition, as it is only observed by a small percentage of kosher Jews.

Is there an easy way to tell if a product is available with a Kosher for Passover hecsher?

You may want to use a packaged/processed product in your recipe– like chocolate syrup, for example. And you might wonder if this particular product is available in a Kosher for Passover form. Many packaged products have kitniyot or chametz hiding in them (example—wheat gluten in soy sauce, corn starch in powdered sugar, etc.). You can do a quick search in the OU Database to find out. Click this link to be taken to the database. Select the box for “Passover,” then enter the name of the product you are searching for (example- chocolate syrup). If a product is available in kosher for Passover form, the brand names will come up in this database. Not every product shows up here, so if you don’t find it in the database, you can do a Google search to see if the product you’re looking for is available under a different kosher hechsher (ex.- “kosher for Passover soy sauce”).

Where can I get more information?

I am not an authority on the kosher laws. I do not personally keep kosher in the strictest sense. I educated myself on this subject during my conversion and as I developed my website. I put together this guide for people who are new to Passover and kosher observance. If you have further questions, the best thing to do is contact a trusted Rabbi.

To learn more about the Passover holiday, and why our restrictions change during this time of year, click here.