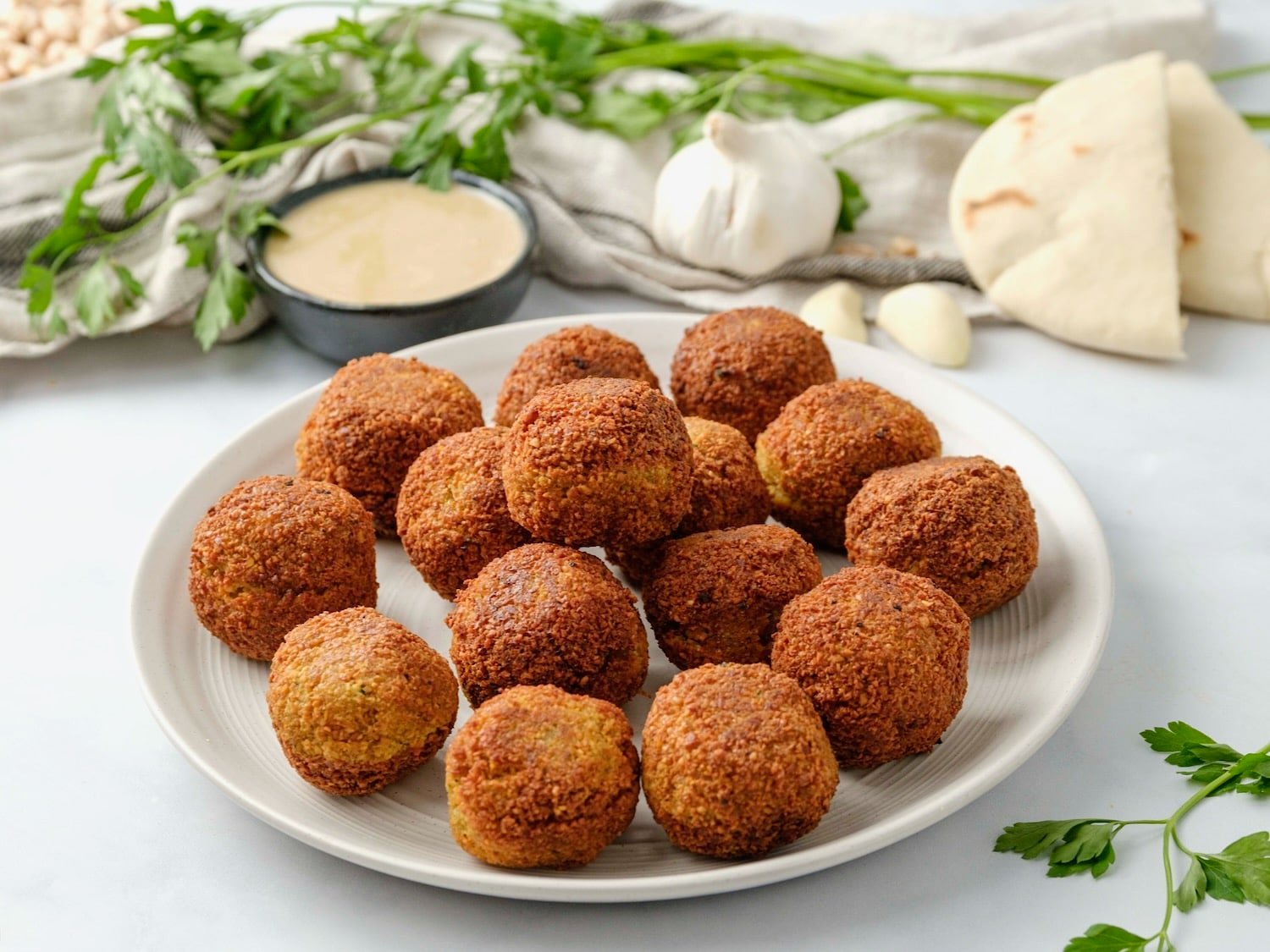 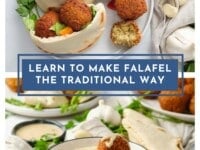 Falafel! It’s one of my all time favorite snacks. This falafel recipe has hundreds and hundreds of positive reviews. Why? Because it’s just that delicious! Making authentic, traditional falafel is an interesting process – and it may be brand new to you. Never fear! I am here to walk you through each step, so you can achieve crispy, tender, tasty falafel every single time.

The History of Falafel

This Middle Eastern food has a very long history. The word falafel may descend from the Arabic word falāfil, a plural of the word filfil, meaning “pepper.” Legume fritters, including versions made with fava beans and lentils, have existed in the Middle East for thousands of years.

According to The Encyclopedia of Jewish Food, written by my friend Gil Marks: “The first known appearance of legume fritters (aka falafel) in the Middle East appears to be in Egypt, where they were made from dried white fava beans (ful nabed) and called tamiya/ta-amia (from the Arabic for ‘nourishment’); these fritters were a light green color inside. Many attribute tamiya to the Copts of Egypt, who practiced one of the earliest forms of Christianity. They believed that the original state of humankind was vegetarian and, therefore, mandated numerous days of eating only vegan food, including tamiya.”

Likewise, the Torah, the Song of Songs, the Mishnah, and the Talmud all mention deep fried lentil fritters, known as “ashishim.” This means early forms of falafel were enjoyed in this region since biblical times, at least. That’s some pretty ancient falafel!

Is a falafel healthy?

This traditional falafel recipe is a great vegan source of protein for people who have cut meat out of their diet. It’s relatively low in fat, and has no cholesterol if you fry it in a heart-healthy, cholesterol-free oil. And if you top it with vegetables in a pita, it becomes a filling and nourishing meal.

In the Middle East, and particularly in Israel, falafel stands are as numerous and plentiful as fast food restaurants are in the United States. Falafel is a quick and easy “meal on the go,” but it’s more nourishing and better for your heart than a burger and fries.

The idea of stuffing falafel into pita pockets is actually an invention of Yemenite Jewish immigrants to Israel. The introduction of pita sandwiches made falafel portable, which expanded its popularity and made it into the number one “fast food” in Israel. Sure beats a Big Mac, if you ask me!

What do I serve with falafel?

You can serve falafel in a variety of ways. A falafel pita sandwich is one of the more popular presentations. In this serving style, a pita pocket provides the perfect “sandwich bread” for the fritters. Stuffed with hummus and other salad-like accompaniments, a falafel pita is truly a treat. Likewise, restaurants often serve these fried vegan fritters with hummus and tahini sauce (known as a “falafel plate.”) Toum, a thick Middle Eastern garlic sauce, makes a delicious accompaniment as well.

Enjoying Falafel Recipes in the Mediterranean and Middle East

I travel in the Mediterranean quite a bit, and falafel is my favorite on-the-go street food in this region. It is popular in many countries, including Egypt, Syria, Lebanon, Greece, and Turkey. And in Israel it has become ubiquitous, found in nearly every neighborhood. Ask any Israeli, and they’re sure to have a favorite falafel stand or restaurant.

On one of my first trips to Israel, our friends took us to Mana Mana Falafel in Tel Aviv. It was one of my very first experiences with Israeli falafel. Three generations ran the place — a grandfather, father, and son.

When I was there, I enjoyed a truly amazing falafel pita — crispy on the outside, hot and fluffy on the inside, with fresh toppings grown on local kibbutzim. Apparently the restaurant has changed management since then, but I’ll fondly remember it as one of my favorite falafel experiences.

Many years have passed since then, and I’ve had the pleasure of enjoying falafel all over Israel. I’ve also cooked falafel in local kitchens with families who grew up making this special dish. Currently, I really enjoy the falafel from Hakosem – otherwise known as “The Magician.” My friend Ariel Rosenthal runs this amazing food stand. If you’re ever in Tel Aviv, I highly recommend making a special trip to Hakosem! The lines are long, but it’s worth the wait.

Is falafel made from fava beans?

Falafel can be made with either fava beans or chickpeas. The following traditional falafel recipe contains methods for using either legume. Historically, early versions of falafel were made with fava beans (and even earlier versions were made of lentils). Consequently, fava beans are still the falafel “legume of choice” in Egypt and other Arab countries. On the other hand, Israeli falafel is almost universally made from chickpeas. This is because many Jews have a medical deficiency called G6PD, a hereditary enzymatic deficiency that can be triggered by fava beans. Chickpeas, or garbanzo beans, provide the perfect substitute.

Here is my recipe for chickpea falafel, along with a few variations you can try. I have included an Egyptian falafel recipe variation at the end of this post, if you would like to try making it with fava beans. It’s greener and spicier than Israel-style falafel. You will need to soak dried chickpeas overnight for your falafel to turn out right; canned beans are too tender and contain too much moisture to achieve the right consistency. Don’t cook the beans, because this will result in a mushier and denser falafel, which is not the proper texture.

I’ve also included instructions for constructing your own falafel pita. Here is my favorite way to make it… start with a layer of hummus deep inside the pocket, then add the falafel, lettuce, tomatoes, and a few dill pickle slices. Top with a thin layer of tahini sauce. 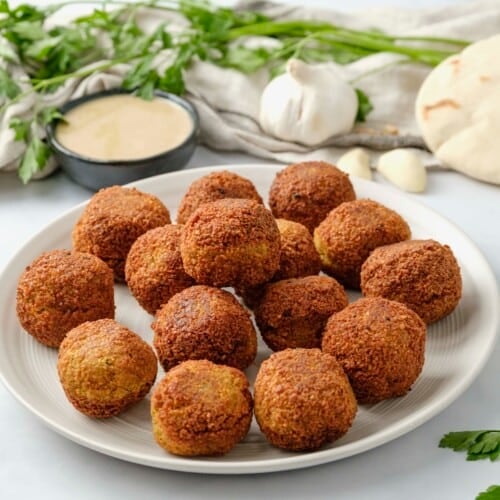 You will also need: food processor, skillet Prep time relates to actual time spent preparing ingredients. You’ll also need 12 hours of resting time to soak the chickpeas. Makes 30-34 falafel balls. Serving size is roughly 5 falafels each. Nutrition is calculated with the assumption that each falafel ball absorbs 1/2 tsp of oil. This is my best estimate; when they are fried at the proper temperature, the falafel absorb very little of the cooking oil. The nutritional information provided here is calculated using an app. If you have specific dietary concerns, please consult your doctor or nutritionist. A note on freezing: I have had several readers ask about freezing this recipe. I have never tried it myself, but here are some tips left from the comments. Some readers have had good luck with freezing the mix, then thawing it the night before in the refrigerator before frying. Sometimes a little more flour or chickpea flour is needed to hold the mixture together after freezing. Some readers have had luck with forming the balls, freezing those, then frying them straight from the freezer. Some have successfully frozen the finished cooked falafel, defrosting as needed.  To bake falafel: Brush a baking sheet with olive oil. Heat oven to 400 degrees F. Form the falafel into flat patty-style shapes and place them on the baking sheet. Brush the top of each patty with extra virgin olive oil. Bake for 20-25 minutes, turning once halfway through baking, until golden brown. Personally, I don’t recommend baking these, as I find it can make them dry – but some people have great luck with it. If you read through the comments you’ll find various responses from readers who have tried baking. I also don’t own an air fryer, so I can’t advise on that. Read through comments for others’ experiences with this device.  The following falafel-like recipe can be baked without losing too much in terms of flavor/texture: Spicy Panko Chickpea Patties. Troubleshooting: If your falafel is too hard/too crunchy on the outside, there are two possible reasons– 1) you didn’t process the mixture enough– return the chickpea mixture to the processor to make it more paste-like. 2) the chickpeas you used were old, or they didn’t soak long enough. Try buying a fresher (newer) batch of dried chickpeas next time and make sure you soak them until they’re doubled in size and slightly tender. Note: Some people like to add baking powder or baking soda to the falafel mix to lighten up the texture inside of the falafel balls. I don’t usually add it, since the falafel is generally pretty fluffy on its own. If you would like to add it, stir 1 tsp of baking powder into the falafel mixture after it has been refrigerated. I do add a bit of baking soda to the soaking water, which is outlined in the recipe. EGYPTIAN FAVA BEAN FALAFEL: Use 1 lb. dried fava beans instead of chickpeas; cover them with cold water, soak them for at least 24 hours, then drain, rinse and peel them to remove the tough outer skins. You can also use a mixture of soaked fava beans and chickpeas if you wish; just make sure the weight of the dried beans adds up to 1 lb. After the beans are soaked and skins removed, add the Classic Falafel ingredients to the processor along with the following ingredients – 1 leek, cleaned, trimmed, and quartered; ¼ cup chopped dill; ¼ cup chopped cilantro; and an additional ¾ tsp cayenne pepper. When mixture is processed to a coarse meal, pour into a bowl. Stir 2 ½ tbsp sesame seeds into the mixture with a fork until it’s evenly dispersed throughout the mixture. Refrigerate and proceed with frying. If mixture seems too “wet” when making the falafel balls, add additional flour by the teaspoonful until the mixture sticks together better. Continue with frying.