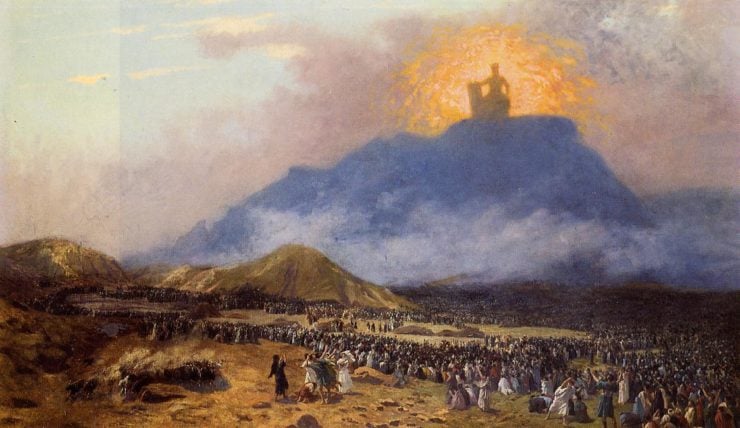 Shavuot (Feast of Weeks) commemorates the revelation of the Torah on Mt. Sinai to the Jewish people, and occurs on the 50th day after the 49 days of counting the Omer. Shavuot is one of the three biblically based pilgrimage holidays known as the shalosh regalim. It is associated with the grain harvest in the Torah.

It took Moses and the Israelites seven weeks of trekking through the desert to reach Mount Sinai. Shavuot literally translates to “weeks” in Hebrew, emphasizing the conclusion of this seven week journey. The timing of the holiday suggests that Shavuot may have been an ancient agricultural festival that took on special significance when the events at Mount Sinai occurred. Because of this, Jews will often “bring the outdoors indoors” by decorating the house and synagogue with flowers and greenery. Many Jews also celebrate the holiday by staying up all night on Erev Shavuot to study and symbolically prepare for receiving the wisdom of the Torah. This event is called Tikkun Leyl Shavuot (the Shavuot night watch).

During Shavuot the Book of Ruth is read, a story with significance for Jews-by-choice. A famine forces Elimelech and his wife Naomi to flee from their Israelite home to the foreign country of Moab. Soon Elimelech dies, and Naomi is widowed in Moab. She continues living there with her two sons, who eventually marry two Moabite girls– Orpah and Ruth. Tragically, both sons also die, leaving Naomi to live with her two widowed daughters-in-law in a strange land.

Naomi decides to leave Moab and journey to Bethlehem to live amongst the Israelites again. She encourages both Orpah and Ruth to return to their parents and remarry in Moab. Orpah reluctantly agrees, but Ruth refuses– out of love, she chooses instead to stay with her mother-in-law and embrace Judaism. This could not have been an easy choice, for Ruth had to leave behind everything she knew in order to stay with Naomi. Her kindness and obedience to God are eventually rewarded in Bethlehem, where she marries a wealthy farm owner named Boaz. Together they have a son named Obed, who becomes the grandfather of King David.

Ruth made famous the phrase, “For wherever you go, I will go; wherever you live, I will live. Your people will be my people, and your God will be my God.” The story of Ruth teaches us that unconditional love often requires sacrifice. Ruth makes a difficult choice, and her kindness is rewarded in the end. The message is that God blesses those who are good and merciful.

How is Shavuot celebrated?

Shavuot is observed by abstaining from work and attending synagogue services. A few special readings are recited: a liturgical poem called Akdamut, which emphasizes the greatness of God; the Book of Ruth, because the story highlights one woman’s choice to join the Jewish people and accept the Torah; and the Ten Commandments, in honor of the revelation of the Torah. It is also customary to study Torah all night; this practice is called Tikkun Leil Shavuot.

What kinds of foods are eaten on Shavuot?

Traditional holiday meals on Shavuot center around dairy foods. Milk is considered to be a symbol of the Torah, which nourishes the people directly, as milk does for a baby.

There could be a number of reasons for the association of dairy with Shavuot. There is a verse in the Song of Solomon (4:11) which says that the Torah is like “milk and honey under your tongue,” which might indicate a connection between the Torah-centric holiday and dairy foods.

Some also believe that because the Israelites had not yet received the kosher laws, they had prepared foods on the first Shavuot that did not follow kashrut. When they received the Torah, they read the new laws of kashrut and realized their meat dishes were not kosher, in accordance with God’s will– so they opted to eat dairy dishes only. The Hebrew word chalav (milk) has a numerical value of 40, which corresponds with the number of days Moses spent on Mount Sinai receiving the Torah.

Still others say that Shavuot occurs during the fertile spring period, when animal mothers produce lots of fresh milk. Whatever the reason, dairy foods are often consumed on Shavuot.

What is the proper greeting for Shavuot?

The greeting for Shavuot is simply “Chag Sameach!” (Happy Holiday).

Shavuot is observed on the 6th to 7th of the month of Sivan.

Shavuot occurs on the following dates: