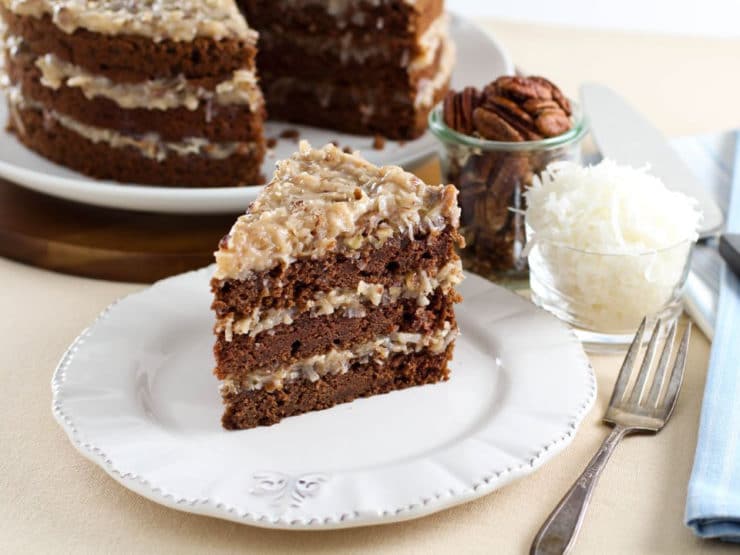 A traditional recipe for Classic German Chocolate Cake layered with coconut-pecan frosting. This is no ordinary chocolate cake recipe!
8.7K shares
4.78 from 35 votes
Jump to Recipe Email Me Recipes 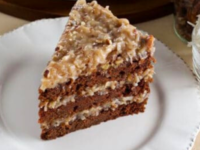 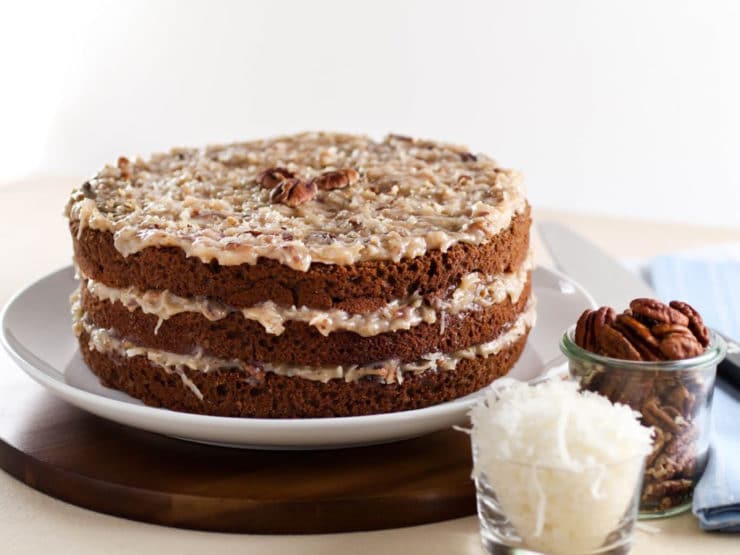 What is in German Chocolate Cake?

German chocolate cake is a light brown chocolate-buttermilk cake sandwiched with a crunchy-chewy coconut-pecan frosting. The frosting is customarily spread only between and on top of the layers and not the sides. Some bakers also began to cover the sides and decorate the rim with whipped chocolate ganache.

Where did German Chocolate Cake originate?

The term “German chocolate cake” was first mentioned in The New Practical Housekeeping by Estelle Wilcox (Minneapolis, 1890), a supplement to her classic 1877 Buckeye Cookery. However, it has no relation to the modern cake. Rather the term referred to an unleavened butter cake flavored with ground almonds and grated white chocolate, the layers filled with preserved cherries, and the cake topped with a chocolate icing. (The earlier Buckeye Cookery contained an almond-lemon cookie recipe called “German Cakes,” made without any chocolate.) Wilcox’s cake and its name were inspired by the baking of Teutonic immigrants in the Midwest.

On the contrary, 20th century treats bearing the name German chocolate cake, which actually contain melted chocolate in the batter, have nothing to do with the country of Germany or, for that matter, the continent of Europe. Rather it refers to Samuel German, an English immigrant and employee of the Walter Baker & Company of Dorchester, Massachusetts. Before German’s arrival, Baker only offered an unsweetened bar chocolate. In 1852, German formulated a dark baking chocolate containing sugar, a larger amount than modern semisweet chocolate, which assumed the name “German’s Sweet chocolate” or simply, with the apostrophe dropped, “German chocolate.” 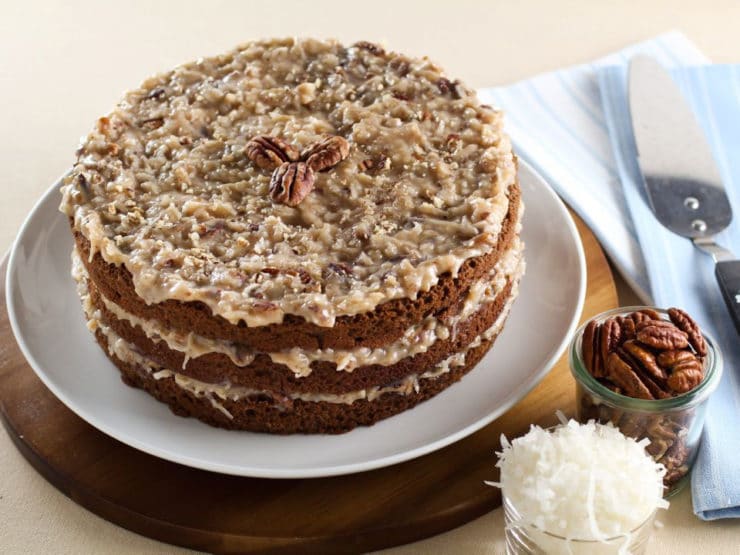 Slightly more than a century after German’s creation, the common modern version of chocolate-buttermilk cake enhanced with coconut-pecan frosting appeared. Similar cooked nut mixtures were common in American cakes since the late 19th century, such as the “Nut Filling,” made from walnuts or pecans, milk, sugar, egg yolks, and vanilla, in the original The Settlement Cook Book (Milwaukee, 1901). Or it could have been inspired by the Mexican cajeta (caramel sauce). Precisely when this union of cake and coconut-pecan frosting initially occurred and by whom is unknown. The first record of this pairing was “Summer German Chocolate Cake” in the May 10, 1956 issue (p. 17) of The Irving News Record (TX), the recipe nearly identical to the modern version: “Four layers of delicious German chocolate, put together with pecans and coconut in a cream filling and topped with fluffy 1 minute frosting… all add up to the most wonderful and unusual cake.” The writer indicated the concept was recently imported to Texas from Oklahoma: “Impressed when her daughter, Mrs. Milton Tomlinson of Frederick, Oklahoma, served this during a recent visit, Daisy filched the recipe for her Irving friends.”

The cake soon spread throughout Texas, especially promoted by County Home Demonstration Clubs, women’s rural economic groups coordinated by the USDA. The recipe (“bake in 3 or 4 layer pans”) was printed in the Thursday September 13, 1956 issue of The Canadian Record (Canadian, TX), sent by two readers in response to the previous week’s request for a “German Sweet Chocolate Cake,” and on the same date in the Abilene Reporter News (TX), the writer explaining: “Two of the cakes getting rave notices at the fair were such recipes and I want to share them with you. German chocolate cake…” The batter was baked in “3 greased and floured 8-inch layer pans or 2 square 9 or 10 inch pans” and the coconut-pecan frosting spread “between layers and on top only.” In the following year, a version of “German Sweet Chocolate Cake” in the April 6, 1957 issue (p. 13) of the Hutchinson News-Herald (KS) repeated the basics of the chocolate cake and coconut-pecan filling, but added a chocolate icing made from chocolate chips, marshmallows, sugar, cream, and butter. 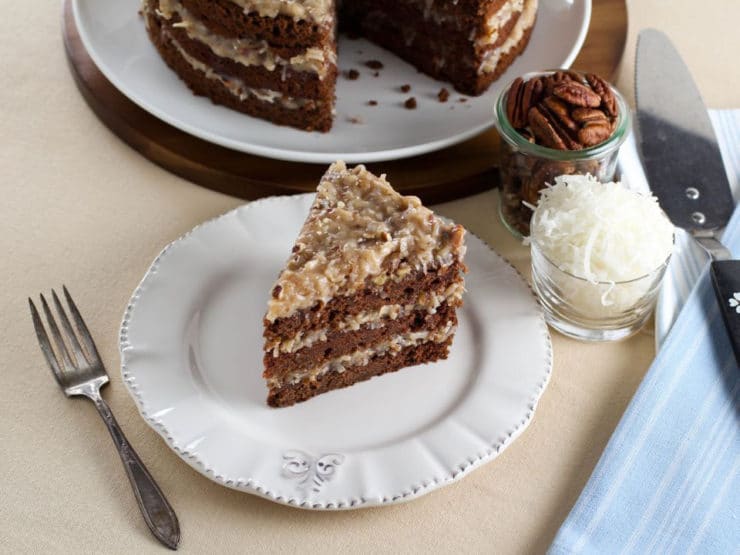 After “German Sweet Chocolate Cake” showed up in the food section of the June 3, 1957 issue of The Dallas Morning News (TX) — the food editor ran a correction two days later, directing to use half the amount of chocolate (four ounces rather than eight ounces) –- its renown quickly soared, not only in the Lone Star State, but nationwide. Proof to many observers that, due to the modern media and word of mouth, American cuisine was no longer regional. Within a few weeks, grocery stores in several parts of America ran out of German chocolate. When Baker’s (then owned by General Foods) discovered the source of the run on its product, the company began printing the cake recipe on the chocolate’s green wrapper and in advertisements, also plugging the company’s flaked coconut, replete with eye-catching photos of the cake, further increasing its popularity. In 1957, sales of German chocolate jumped 73 percent. The December 17, 1957 issue of The Daily Times News (Burlington, NC) noted: “There is a new cake that is causing considerable comment here this Christmas. It is a German chocolate cake and everywhere we have been recently someone has been talking about the recipe and how it may be obtained.” The cake became a favorite of Lyndon Johnson, who even served it as dessert to German Chancellor Ludwig Erhard during a 1963 visit to his Texas ranch.

Sweet chocolate produces cakes sweeter and with a milder chocolate flavor than unsweetened chocolate. Sour milk contributes a moist, tender crumb and, in conjunction with sweet chocolate, results in a rich and dense cake. The chocolate essence is enhanced by the use of coffee. Due to the folded in egg whites, the cake turns out somewhat fluffy with a delicate crumb. This cake is less intense than a classic devil’s food, so it benefits from the coconut-pecan frosting. Cooking the frosting ingredients together produces a caramelized flavor and gooey texture. Among the cake’s many advantages is the frosting is less perishable. If you prefer a more generous amount, increase the frosting recipe by half.

German chocolate cake’s popularity no longer equals that of the initial decades or so following its emergence, but remains an American classic and comfort food and one of the country’ favorite chocolate cakes. The treat is sold in many bakeries, while numerous home cooks still whip it up for special occasions, including birthdays, barbecues, father’s day, and holidays. June 11 is National German Chocolate Cake Day. 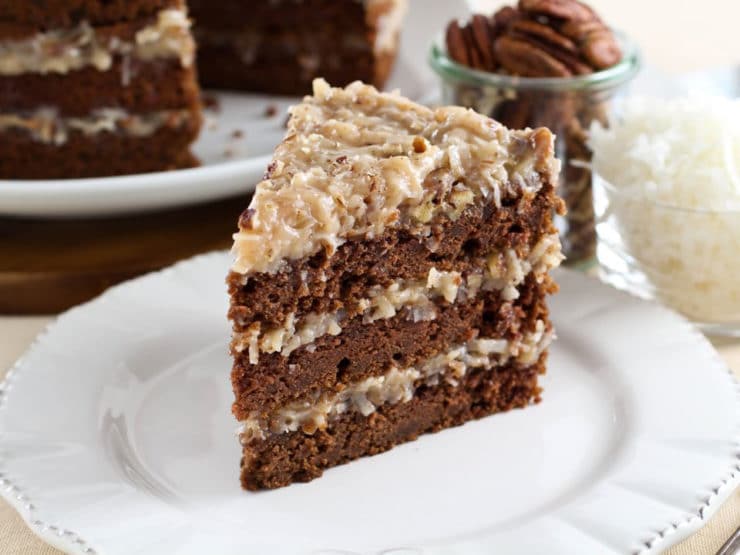 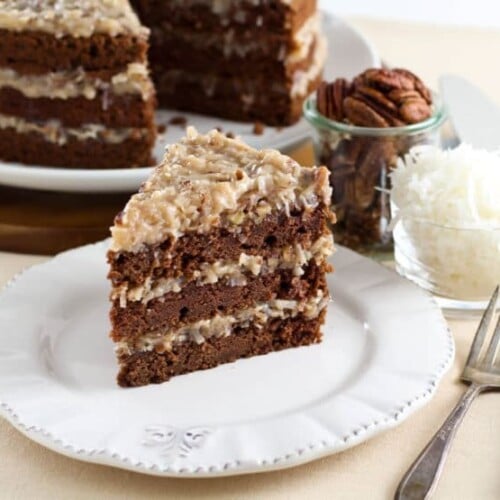 To prepare the chocolate

To make the frosting

Nutritional information should be considered an estimate only; please consult a registered dietician, nutritionist, or your physician for specific health-related questions. Read more here. Please note that the recipe above is published using a recipe card plugin, with preexisting software which can auto-calculate metric measurements, as well as change the number of servings. Metric conversions and changes to the number of servings (resulting in different ingredient amounts) will only appear in the ingredient list, and are not changed within the step-by-step directions of the recipe.
8.7K shares
My New Biking Obsession PREVIOUS