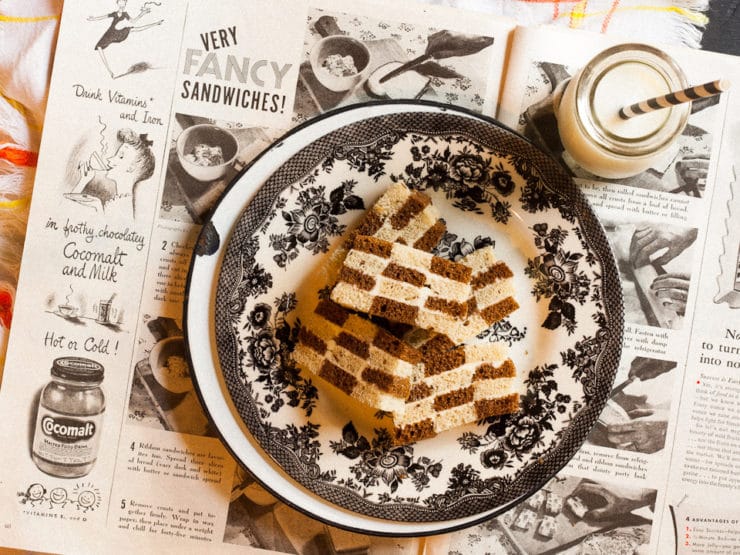 Chef Louise Mellor shares how to make simple, vintage fancy sandwiches for your next soiree. From wartime American Home Magazine.
225 shares
5 from 4 votes
Jump to Recipe Email Me Recipes 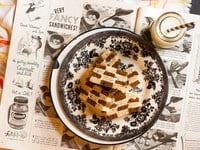 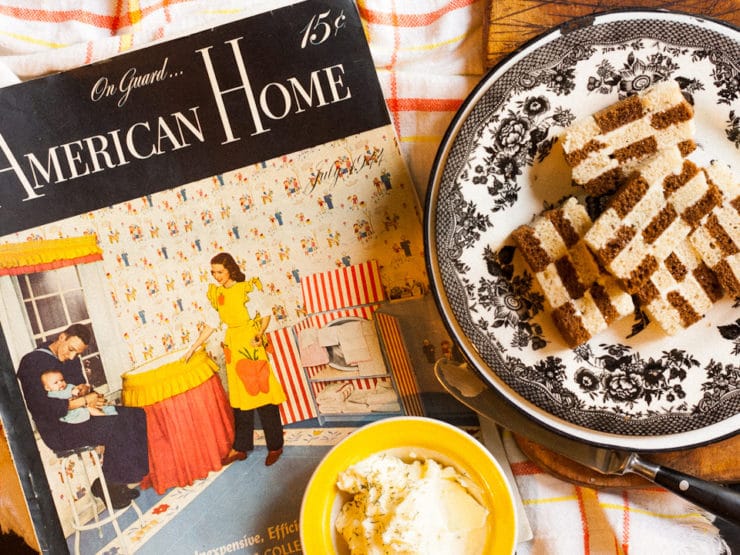 This vintage American Home Magazine (July 1944) can best be compared to a modern day version of Good Housekeeping Magazine. The substance of its text pertains mostly to domestic life, with the Contents Page listing articles on topics such as children, decorating, gardening, crafts, home maintenance, parties, food, and of course housekeeping. What makes this publication unique (compared to its modern day counterparts) is that it spoke to a readership who had been at war for nearly 6 years.  Although the details and politics of World War II are never directly noted, it is subtly mentioned and personalized through graphics and terms such as “pre-war,” “post-war,” “rations,” and common wartime exultations followed with exclamation marks such as “VICTORY!” and “fight for FREEDOM!”

Sandwiched between the brightly colored cover are 70 thin, wispy, newspaper-like pages, mostly in black and white. Splashes of color here and there highlight advertisements and featured articles. The accents, carefully placed, almost appear to be embellished by hand with colored pencils. The vibrant reds, yellows, and hues of green intermittently highlighting the black-and-white pages are illustrative of the periodical’s opposing messages throughout its pages.

There is an underlying conflict throughout the basic layout that strategically calls attention to simplicity, reminding the readers of the seriousness of war rationing, cutting expenses, and eliminating waste. There are “how-to” instructions on planting your own “VICTORY garden” for fresh fruit and vegetables and even advertisements on home canning. Contrary to the simplicity found in the war rationing lifestyle pages are vibrant and colorful advertisements for shiny new appliances and state of the art technology, beckoning American readers to get with the times. The colors splashed across the pages appeal to their desire for a more colorful life and give them hope for a brighter future. 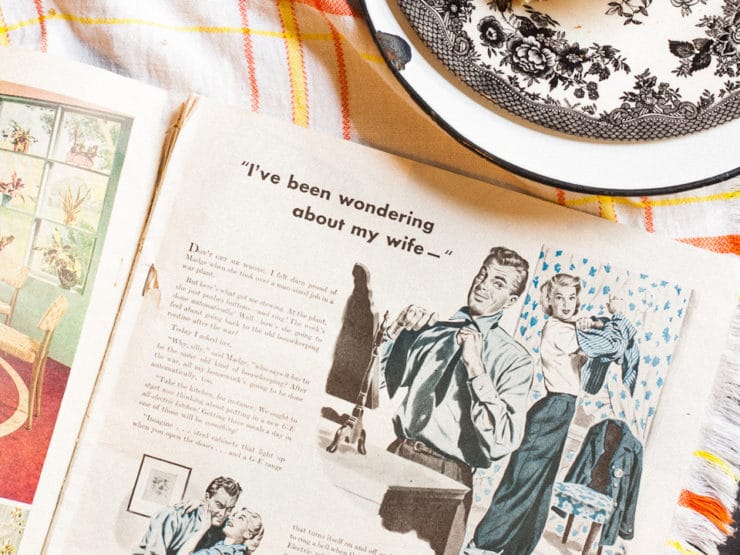 An advertisement that appears in the magazine illustrates this conflict between the wartime celebration of simplicity and the appeal of a modern lifestyle:

Don’t get me wrong.  I felt darn proud of Madge when she took over a man-sized job in a war plant.  But here’s what got me stewing.  At the plant she just pushes button – and zing! The work’s done automatically!  Well – how’s she going to feel about going back to the old housekeeping routine after the war?  Today I asked her.  “Why, silly,” said Madge “We ought to start now thinking about putting in a new GE all-electric kitchen!” 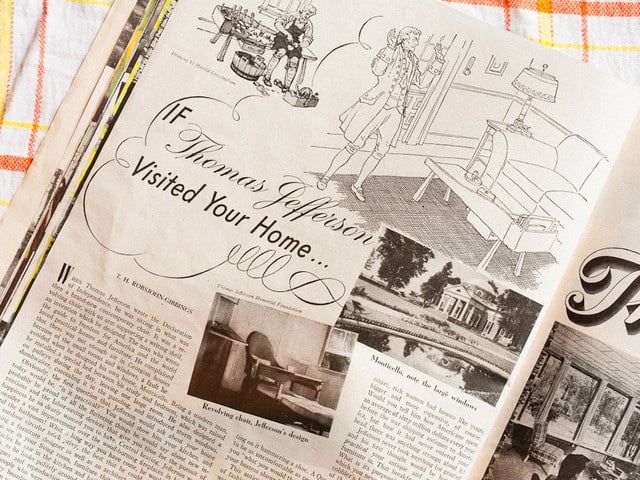 A two page spread highlights the “American Hostess” and her treasured collection of fine china and antique collectibles, while another asks the question “What if Thomas Jefferson visited your home…” This article attempts to persuade Americans to make Thomas Jefferson proud, stop collecting antiques from his era and live a more simplistic life. Again, two vastly different schools of thought existing side-by-side in the same periodical. 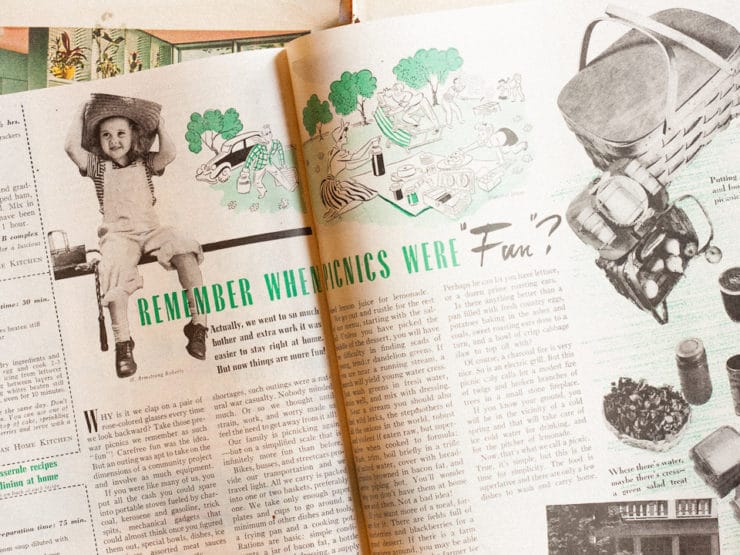 The article pictured above emphasizes a need to shift perspective and embrace a new, simplified lifestyle:

“Why is it we clap on a pair of rose-colored glasses every time we look backward? Take those pre-war picnics we remember as such fun! Carefree fun was the idea. But an outing was apt to take on the dimensions of a community project and involve as much equipment. With gas rationing and meat shortages, such outings were a national war casualty. Our family is picnicking again – but on a simplified scale that is infinitely more fun than before.”

After this article on “simplified picnicking,” readers are provided with a recipe for “Very Fancy Sandwiches.” I felt that this recipe best represented this July issue of American Home Magazine because it exemplifies the narrative of the periodical– the American desire to be fancy and live large on a rationed bread-and-butter budget.  It goes to show that even the simplest ingredients can be transformed into something special, with a little effort, for VICTORY! … 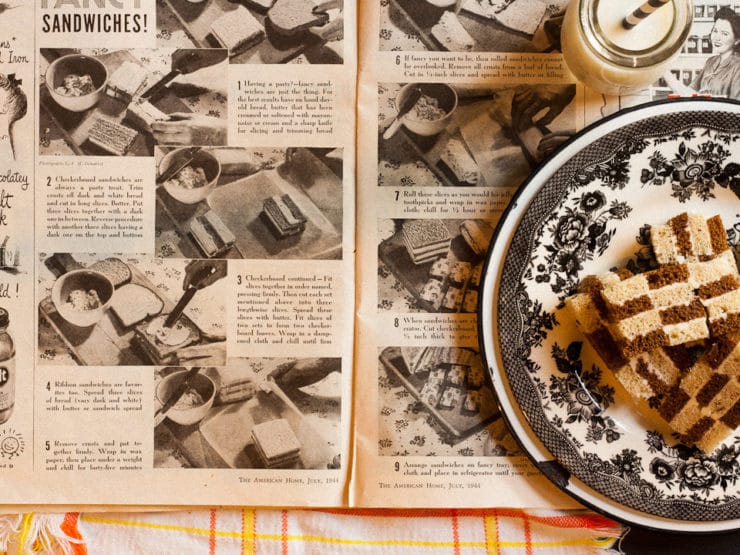 I used dark and light rye bread with creamed butter sprinkled with a little dill. Cut delicately, they are dainty and a perfect tea sandwich. You could easily make this patterned sandwich using a creamy egg salad or dill cream cheese with thinly sliced cucumber. Just make sure your filling is a little creamy (this will be your glue) and refrigerate long enough for the sandwich slices to bond together. I’ve outlined the method below. 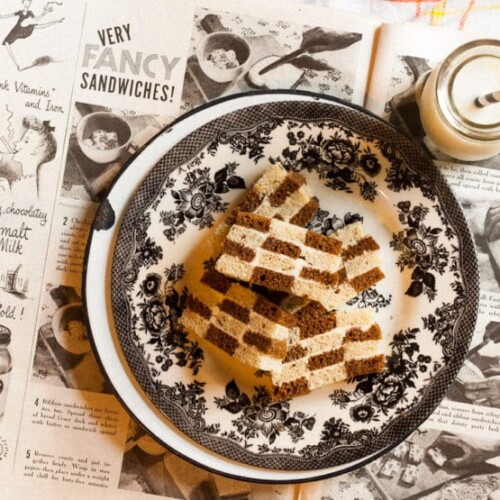 Nutritional information should be considered an estimate only; please consult a registered dietician, nutritionist, or your physician for specific health-related questions. Read more here. Please note that the recipe above is published using a recipe card plugin, with preexisting software which can auto-calculate metric measurements, as well as change the number of servings. Metric conversions and changes to the number of servings (resulting in different ingredient amounts) will only appear in the ingredient list, and are not changed within the step-by-step directions of the recipe.
225 shares
Spiced Up Turkey Burgers PREVIOUS