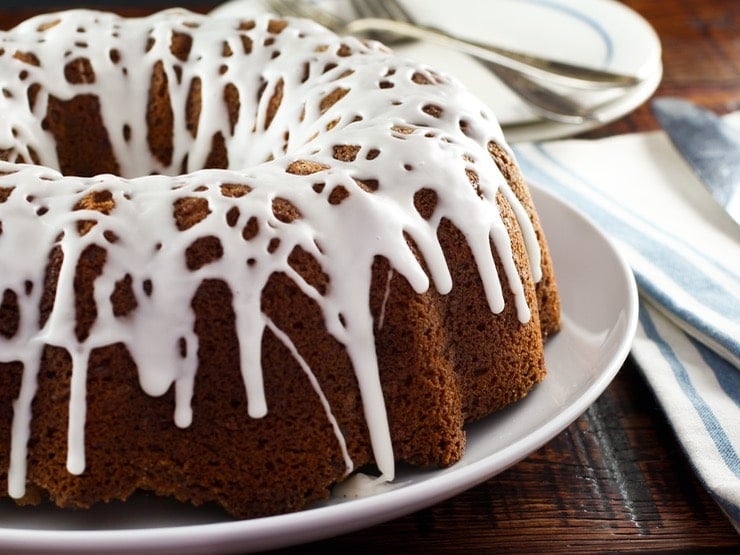 The history of sour cream coffee cake and a traditional recipe for this beloved coffee-time treat from food historian Gil Marks.
1.4K shares
5 from 1 vote
Jump to Recipe Email Me Recipes 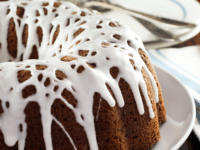 Coffeecakes are baked goods, generally sturdy and informal, that commonly accompany hot beverages. They, of course, can be enjoyed without the benefit of coffee or tea. Yet eating a piece of simple cake with a hot beverage provides textual and flavor contrasts that enhance each item, making for a more substantial and pleasurable experience. Thus cakes and pastries were a fundamental part of the menu of coffeehouses from their onset.

The words coffee and tea were first mentioned in English in 1598 in a translation of the travels of Dutch navigator Jan Huyghen Van Linschoten. Actual coffee was only introduced to Europe (outside of the Ottoman Empire) by way of Venice in 1615 and reached England in 1630 (23 years after the founding of Jamestown), several decades before the arrival there of tea in 1652. The first coffeehouse outside the Ottoman Empire opened in Livorno, Italy in 1632; the first in England was in Oxford in 1650. Subsequently, coffee cultivation spread outside its native Ethiopia, while the cost of sugar in Europe plummeted due to the influx of Caribbean cane. As a result by the end of the 18th century, the masses of Europe partook of coffee on a daily basis and it replaced beer there as the most widely consumed beverage.

Meanwhile, the Dutch brought tea to North America in 1650 and coffee in 1670. Initially, tea proved more popular. The first coffeehouse in America, the London Coffee House, opened in 1676 in Boston. American coffeehouses served as one of the primary locations for revolutionary activities, including purportedly planning the Boston Tea Party. After the War of 1812, less expensive and high quality coffee began flowing in from South America. Beginning in the 1840s, tumultuous economic and social conditions in Germany led to decades of mass immigration to America, the newcomers (along with Scandinavians) bringing their foods, traditions, love of coffee, and some common Teutonic expressions, including kaffeekuchen (yeast coffeecakes), blitzkuchen (“lightening,” quicker cakes made without yeast), krummelkuchen (crumb cake), kaffeehaus (coffeehouse), kaffeeklatsch (coffee chat), and streusel (from streuen, “to scatter/strew”). Demographic changes generally take several decades or even generations to engender local culinary and cultural transformations. By the mid-19th century, coffee replaced tea and hard cider as the American drink of choice and German-style kuchen increasingly supplanted British baked goods as American coffeecakes. 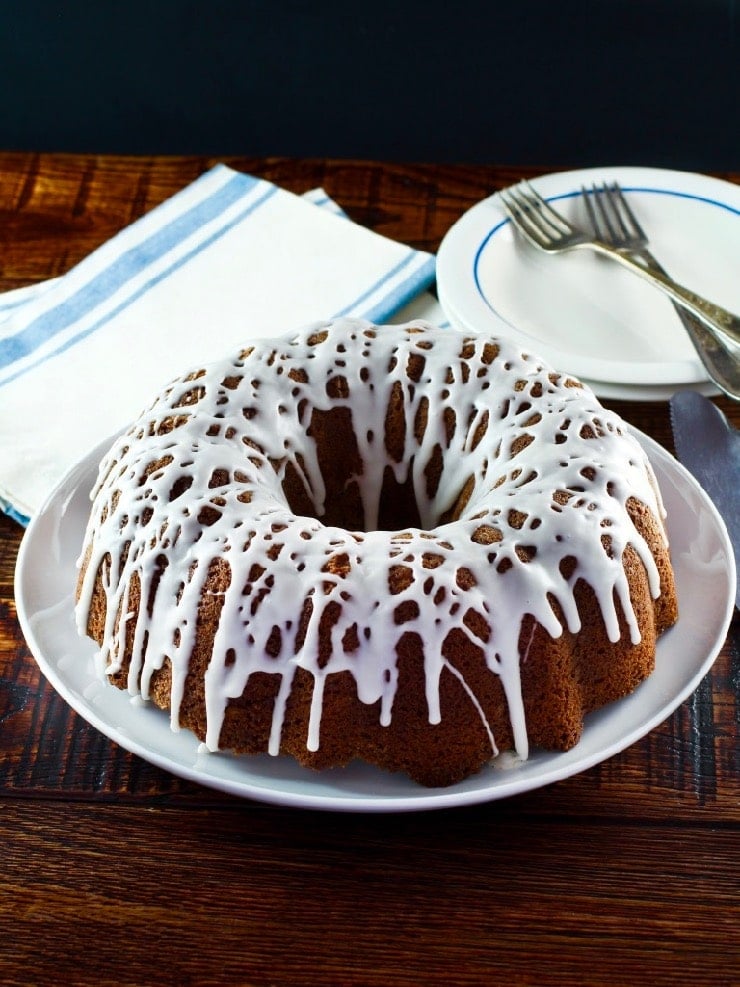 The British began referring to various baked goods served with popular hot beverages by the names “tea cakes” and “coffee cakes” akin to the initial “chocolate cakes,” which accompanied, but did not contain, chocolate. English tea and coffee cakes were typically unleavened cookies, scones, and crumpets (akin to what Americans call English muffins), or sweet yeast buns. In this vein, the “Tea Cakes” in The Cook and Housekeeper’s Complete and Universal Dictionary by Mary Eaton (England, 1822) were unleavened sugar cookies, while her “Coffee Cakes” consisted of small sweet yeast cookies. The latter usage eventually disappeared in England.

On the other hand, the term “coffee cake,” denoting the beverage accompaniment, slowly spread to America, such as in The Family Physician by Samuel B. Emmons (Boston, 1844). It was not, however, until after the Civil War when the impact of German coffee traditions grew more pronounced that the term referring to the beverage accompaniment became commonplace in America. More typically, Americans initially used it to indicate a chemically-leavened butter cake incorporating brewed coffee into the batter, such as the “Coffee Cake” in the July 1860 issue of The Genesee Farmer (Rochester, NY) and the “Connecticut Coffee Cake” in Jennie June’s American Cookery Book by Jane Cunningham Croly (New York, 1870). As late as the 1918 edition of The Boston Cooking School Cook Book, Fannie Farmer employed “Coffee Cake” and “Rich Coffee Cake” in the “Cake” section to denote batters containing coffee, while her “German Coffee Bread” (a streusel-topped yeast cake) and “Coffee Cakes (Brioche)” in the “Bread and Bread Making” section entailed yeast-raised sweet breads popular with hot coffee. The “Coffee Cake” in The Godey’s Lady Book Receipts and Household Hints by Sarah Frost (Philadelphia, 1870), manifesting a lingering British influence, entailed simple sweet yeast cakes with raisins.

Reflecting the linguistic and gastronomic changes afoot in America at that time was Aunt Babette’s Cook Book by Bertha Kramer (Cincinnati, 1889), the author from a German-Jewish background. In the generic “Cake” section, Kramer provided a recipe for “English Coffeecake,” entailing a coffee-flavored butter cake leavened with soda. In addition, there was a separate section entitled “Coffeecakes,” encompassing an assortment of German yeast-raised kuchen and pastries enjoyed with coffee. Pointedly, the recipes in the “Cake” section were leavened with chemicals, while all of the baked goods in her “Coffeecakes” section were raised with yeast. Kramer referred to one of these yeast cakes (topped with chopped almonds, cinnamon, and sugar) as “Kaffee Kuchen” and three others as “Coffeecake.” Hood’s Practical Cook’s Book by C.I. Hood & Co. (Lowell, MA, 1897), a sarsaparilla and medicine producer, included “German Coffeecakes,” consisting of a sweet yeast bread pressed out and sprinkled with chopped almonds, cinnamon, and sugar, and noting: “The greater part of the sweetness should be on the top.” 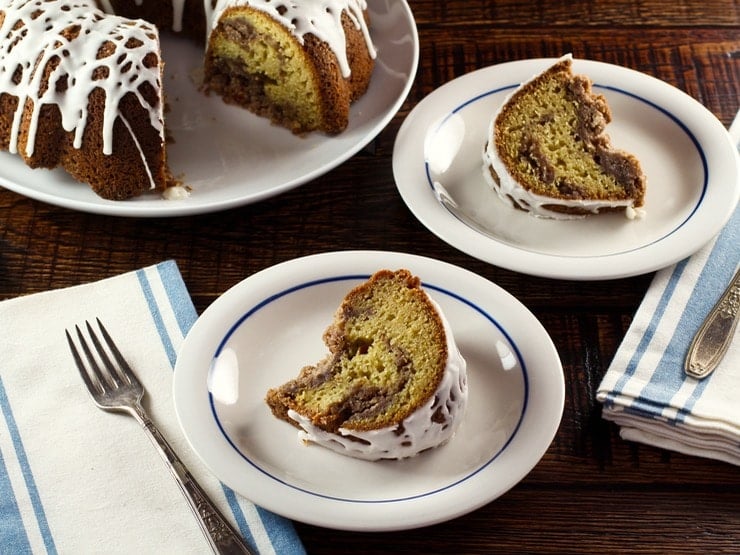 A different Teutonic topping proved even more popular – streusel – a simple pastry of flour, sugar, butter, and sometimes spice. Since it has no liquid, streusel can contain a higher amount of sugar and butter than other pastries, which makes it tender and sweet. The larger the proportion of flour, the crumblier the texture, while a higher proportion of sugar results in crisper and more granular chunks. Streuselkuchen began appearing in Pennsylvanian manuscripts in the 1860s and soon in small German bakeries in the Northeast and Midwest. The “Streusel Coffee Cake” in A Book of Cooking and Pastry by C.F. Pfau (Quincy, IL, 1887), the first record of the word streusel in an American cookbook, was a traditional yeast-raised treat rolled out and topped with streusel.

Meanwhile, the nature of American cakes and coffeecakes (the kind accompanying hot coffee) was changing corresponding to the popularization of commercial baking soda and baking powder. Chemically-leavened coffeecakes, a distinctively American innovation, are much easier and quicker to prepare. They fall in between quick breads and butter cakes. In general, coffeecake batter is more liquidy than quick breads as well as contains a bit more sugar and fat (either butter or oil), but less so than butter cakes. The final product is lighter, moister, and has a finer crumb than quick breads, but less sweet and intense than butter cakes. Coffeecakes are able to be prepared either like quick breads -— stirring together the liquid and dry ingredients -— or creamed like butter cakes. The creaming method produces a fine crumb. Whereas butter cakes are commonly frosted and quick breads tend to stand alone, coffeecakes are usually single-layered and lightly gilded with a glaze, streusel, or cinnamon-sugar topping or a combination of these -— almost never a frosting.

In the early 1800s, as Americans increasingly leavened baked goods with pearlash and later baking soda, they discovered that clabber (naturally fermented raw milk) and clabbered cream (which rises to the top of clabber during fermentation — commonly referred to then as “sour cream,” but not the same as modern cultured sour cream) provided acid to activate the alkali as well as enhanced the flavor and texture of the final product. Eliza Leslie in Seventy-Five Receipts for Pastry, Cakes, and Sweetmeats (Boston, 1828), in a recipe for “Cream Cakes,” early biscuits leavened with pearlash and baked in “muffin-rings,” noted: “For these cakes, sour cream is better than sweet.” The December 1837 issue of “The Family Magazine” (Cincinnati) copied Leslie’s recipe with an added explanation: “The pearlash will remove the acidity, and the batter will be improved in lightness.” 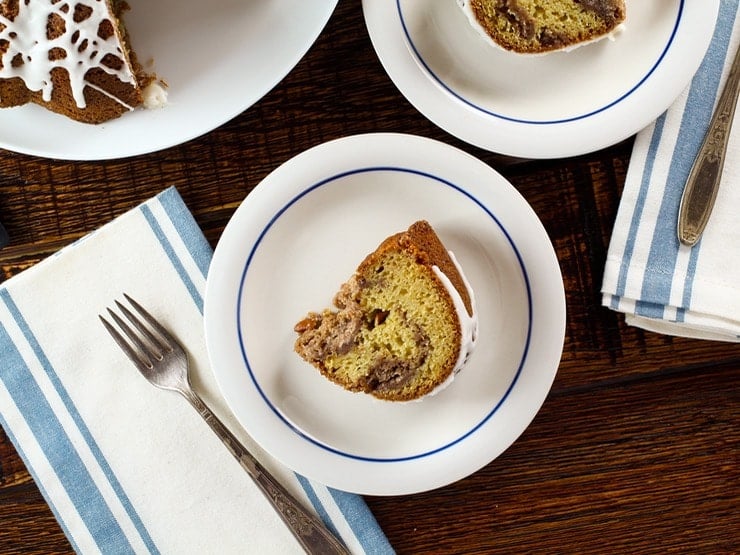 Following World War I, pasteurization in America became widespread and practically eliminated various old-fashioned homemade naturally-fermented dairy products. In cakes, instead of old-fashioned clabber and clabbered cream, Americans shifted to using commercial cultured sour cream (made by adding a bacterial culture to pasteurized light cream and heating at 71.6°F to achieve the desired level of lactic acid and medium sharp flavor). As with other commercial products, sour cream was initially sold in bulk and scooped out of barrels. Eventually, producers began packaging it in reusable 16-ounce glass jars. After supermarkets introduced refrigerated cases and innovation led to sour cream prepackaged in small plastic containers, this venerable Eastern European necessity became a standard of the mainstream American kitchen and ingredient in various baked goods.

Sour cream coffeecake, sometimes called Russian coffeecake, emerged as one of the most delicious and popular of all coffeecakes. An early record of “Sour Cream Coffee Cake,” already topped with streusel, was in Streamlined Cooking: New and Delightful Recipes for Canned, Packaged and Frosted Foods by Irma Rombauer (Indianapolis, 1939), the author noted for being on top of and furthering contemporary food trends. This recipe subsequently appeared for the first time in her classic The Joy of Cooking in the 1941 edition. Soon some cooks moreover began to sprinkle part of the streusel in the center of the batter as well as on top, spreading the wealth and flavor.

This dense coffeecake is not overly sweet or posh — proving ideal for breakfast, brunch, snacks, and other informal occasions — while the ample streusel makes it rich and impressive enough for a dinner dessert and any time of the day — even without coffee. The lactic acid in sour cream results in a tender crumb and also keeps the cake fresh longer. The fat contributes flavor and moistness. The slight tang of the sour cream and the warmth of the cinnamon-accented streusel perfectly underscore the velvety, buttery cake. The batter is rather thick in order to support the heavy streusel. An optional topping of cream cheese or fruit filling or mixing in various additions enhances the sensory experience and provides variety. Coffeecake can be made in almost any type of pan, but many people prefer a Bundt. 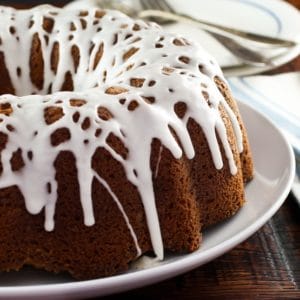 To make the streusel

To make the optional glaze

Nutritional information should be considered an estimate only; please consult a registered dietician, nutritionist, or your physician for specific health-related questions. Read more here. Please note that the recipe above is published using a recipe card plugin, with preexisting software which can auto-calculate metric measurements, as well as change the number of servings. Metric conversions and changes to the number of servings (resulting in different ingredient amounts) will only appear in the ingredient list, and are not changed within the step-by-step directions of the recipe.
1.4K shares
Saffron Chickpea Risotto PREVIOUS