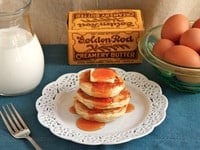 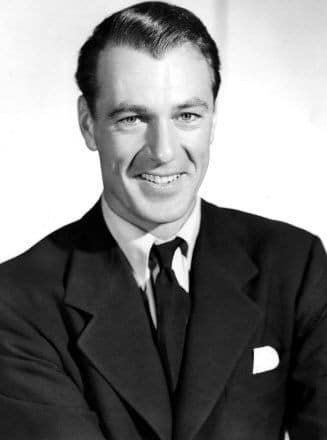 Gary Cooper, born Frank James Cooper on May 7, 1901, seemed destined to play the cowboy hero. He grew up on his family’s 7 Bar 9 ranch in Helena, Montana, a working piece of ranch land filled with coyotes, rattlesnakes and grizzly bears. In the early part of the century, cowboys and Native Americans still walked the streets of Helena. As a young child, Frank learned to use a rifle, skin wild animals and make his own moccasins. It seems fitting that Frank went on to become one of the biggest stars of the Western film genre, rising to the popularity of other Hollywood cowboy greats like Gene Autry and John Wayne.

Frank’s early life on the ranch undoubtedly gave him an advantage when it came to Westerns, but it was his sophisticated edge that truly rocketed him to stardom. Frank’s parents, both British-born immigrants to America, made sure that he had a well-rounded education. He attended the prestigious Dunstable School in Bedfordshire, England, providing a stark contrast to life on his family’s Montana ranch. His father, Charles Cooper, was a Montana state supreme court judge. He met his wife, Alice, when she came to him for some financial advice. They were married in 1894. Together they shared a love for the outdoors and the Montana landscape suited them perfectly.

The Coopers raised their two sons with a strict upbringing and an emphasis on good manners. Young Frank spent his youth hunting, digging for arrowheads and searching for gold flakes that he could exchange for candy. After graduating high school Frank attended Wesleyan College, where he was injured in a car accident. The accident forced him to take some time off to rest back at the family ranch, where he honed his horseback riding skills. After recovering he transferred to Grinnell College in Iowa, but never finished. At that time his sights were set on becoming a landscape artist. In 1924, a fateful trip to visit his parents in their new home in Los Angeles changed all of that.

Frank Cooper started his film career as an extra and a stuntman. Early on he discovered that he shared his name with two other film actors. His agent, casting director Nan Collins, convinced him to change his stage name from Frank to Gary, after her hometown.

Gary’s parents were passionate about his new path and his mother even served as his chauffeur for a time. Because of his good looks, laid-back temperament and gracious manners, he was soon cast in larger roles in silent films. He starred alongside silent movie star Clara Bow, who he was romantically linked to for a time. In fact, Gary Cooper developed quite a reputation for his romantic involvement with several of his leading ladies. He eventually married actress Veronica Balfe, who went by the stage name Sandra Shaw, in 1933 and the couple had a daughter named Maria. Maria ended up being a painter, the career her father had once aspired to. It seems artistic talent was in their genes! 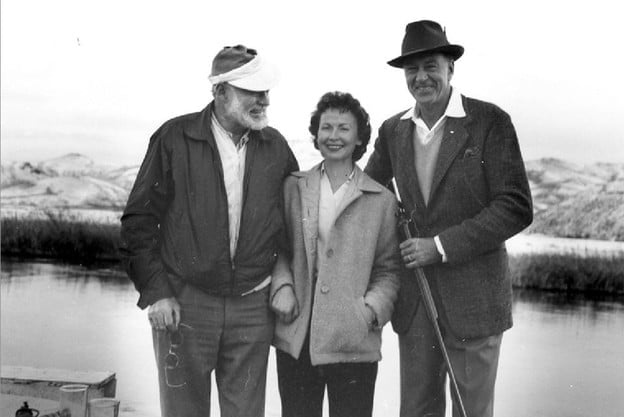 Gary Cooper’s acting career year spanned over many years, beginning with the silent era and continuing right on through the Golden Era of Hollywood. He received two Academy Awards for his roles in Sergeant York and High Noon, and received an honorary Oscar in 1961 for his numerous memorable performances throughout the years. He counted Ernest Hemingway among his closest friends, and starred in the film adaptations of A Farewell to Arms and For Whom the Bell Tolls. The latter performance earned him an Academy Award nomination.

Gary Cooper was arguably the most authentic cowboy frontiersman to grace Old Hollywood cinema. When he passed away from cancer in 1961, his fans were still reeling from the passing of Clark Gable just a few months earlier. Some have said that Hollywood’s Golden Era died with them. 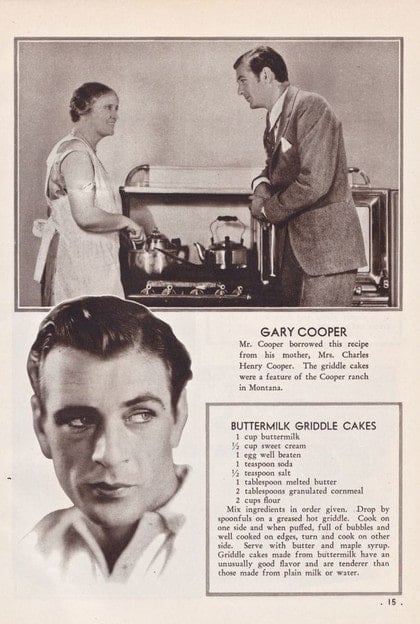 Gary Cooper’s Buttermilk Griddle Cakes as they appear in Favorite Recipes of the Movie Stars, a thin paperback cookbook published in 1931.

This recipe for Buttermilk Griddle Cakes was published in a vintage paperback cookbook, Favorite Recipes of the Movie Stars, in 1931. The recipe is from his mother, Alice Cooper, who served it regularly at the family ranch. They are silver-dollar sized, soft and tasty. According to the original recipe: “Griddle cakes made from buttermilk have an unusually good flavor and are tenderer than those made from plain milk or water.” Top them with melting butter and maple syrup, then enjoy a taste of Gary Cooper’s childhood in Helena, Montana.

Take advantage of the sweet and salty breakfast combo by serving these silver-dollar-sized pancakes with a side of homemade scrambled eggs.

You will also need: mixing bowls, frying pan or griddle, spatula Adapted from Favorite Recipes of the Movie Stars

Nutrition Facts
Gary Cooper's Buttermilk Griddle Cakes
Amount Per Serving
Calories 106 Calories from Fat 45
% Daily Value*
Fat 5g8%
Saturated Fat 3g19%
Cholesterol 24mg8%
Sodium 143mg6%
Potassium 36mg1%
Carbohydrates 10g3%
Protein 2g4%
Vitamin A 195IU4%
Calcium 18mg2%
Iron 0.6mg3%
* Percent Daily Values are based on a 2000 calorie diet.
Tried this recipe?Let Us Know How It Was In The Comments.
4.3 from 3 votes
Nutritional information should be considered an estimate only; please consult a registered dietician, nutritionist, or your physician for specific health-related questions. Read more here. Please note that the recipe above is published using a recipe card plugin, with preexisting software which can auto-calculate metric measurements, as well as change the number of servings. Metric conversions and changes to the number of servings (resulting in different ingredient amounts) will only appear in the ingredient list, and are not changed within the step-by-step directions of the recipe.