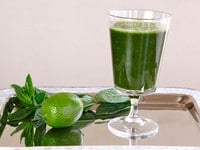 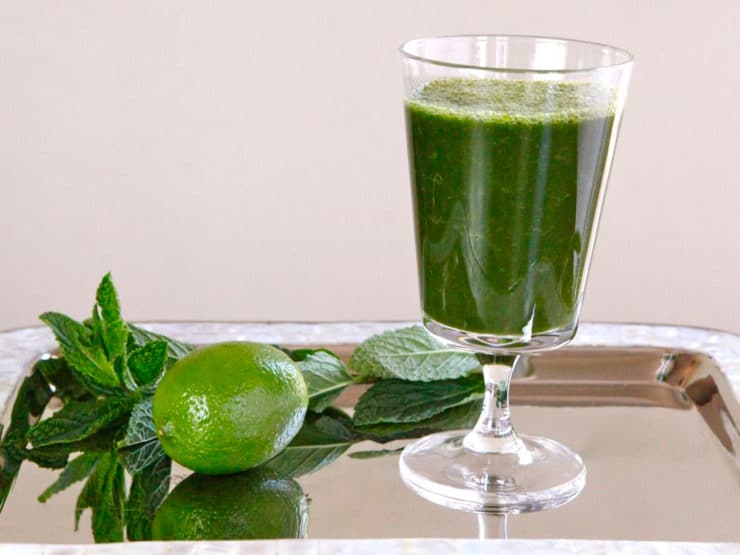 Passover has passed over, and I’m guessing that most of you are more than ready to leave the matzo behind. Enter the green smoothie, or as my husband has nicknamed it, “The Greenie.” I introduced the concept of a green smoothie to him after seeing different variations on several food blogs. The concept is simple—blend greens, fruit, water and other ingredients together to make a healthy tonic. Drink your veggies, so to speak. The idea appealed to my husband, who likes greens in moderation but can’t stomach more than a serving or two a day. After that, he likes to tell me that he feels “like a goat.” I don’t blame him, but I know how important it is for us to consume fresh greens each day. With the green smoothie, we’re drinking our greens, so it doesn’t feel as cumbersome as a salad.

We experimented with different green smoothie combinations, and while many were good, they weren’t quite perfect. Then my husband took over. He started with the combination I’d been playing with—water, greens, fresh mint, apple, pear and lime juice. He cut the amount of water significantly in order to make the smoothie thicker and less watery. He also added cinnamon, which I think is inspired. Cinnamon balances blood sugar by increasing the body’s ability to metabolize sugar, which means less sugar is stored as body fat. It’s often recommended as a natural dietary aide to diabetics, and it happens to taste fantastic in a green smoothie. For the final touch, he added a bit of natural sweetener– not a lot, just a hint of sweetness. We usually use a packet of Truvia (stevia-based sweetener), but you can also use 1 tbsp agave nectar.

The result was a green smoothie that we actually love to drink… in fact, it’s become a daily ritual in our home. The mint and lime juice give it a fresh, crisp edge that is somewhat similar to my favorite summer beverage, limonana. It’s a thick drink, and some of the greens will cling to the glass, which I like to polish off with a spoon. My dog Marley enjoys a Greenie dog treat each day, and we’ve taken to enjoying our own daily Greenie Smoothie as well. This concoction might look strange on paper. It may not be everybody’s cup of tea, but I’ve made it for a few people (including some skeptics), and everybody has liked it so far. I’m telling you, it’s magical… especially the way it makes you feel.

A few tips. Organic is important. You’re blending together whole vegetables and fruits (including peels), and you want to keep the drink as clean as possible. If you can afford organics, I highly recommend them. Kale is pretty bitter unprocessed, but when you process it (or massage it, as in my kale salad recipes), natural sweetness is released. The same is true for kale smoothies. Blending the kale removes any bitterness and renders the greens much sweeter than they are whole… so if you’re anti-kale, this is a great way to try it. If you’re using kale, don’t remove the stalks—they contain tons of fiber. Also, make sure you follow the steps in the order suggested. If you simply cram all the ingredients into the blender at once, they won’t blend properly (even if you have a powerful Vitamix-style blender).

Kale is one of the most nutritionally dense foods in existence. It helps to reduce cholesterol, lowers cancer risk, increases fiber intake, and has a broad range of healthful antioxidants. That said, I recently learned that raw kale contains a lot of Vitamin K, which can be a problem for people taking blood thinners. It also has a natural compound that can suppress thyroid function in certain individuals (not everybody though). Because of these risk factors, my husband and I switch off between raw kale and raw spinach. The incredible health benefits of kale tend to outweigh the negatives, in my opinion, but it’s better to be safe than sorry… plus, I feel it’s never a good idea to eat too much of any one thing. A diet with a variety of healthy foods should be the goal. If you have a sensitive stomach, stick to fresh spinach (at least in the beginning), as it’s a bit easier to digest. Luckily, this smoothie is equally delicious with either spinach or kale– and you can switch up the lime juice with lemon, if you prefer. Note: Since posting this smoothie, my husband and I have started adding grapes to the mix for added natural sweetness. It’s delish, so I’m adding grapes to the recipe!

Just look at all of the green goodness you’re getting in one drink! It’ll make you feel like a million bucks. Honest! Have you ever made a green smoothie before? What’s your favorite combination? 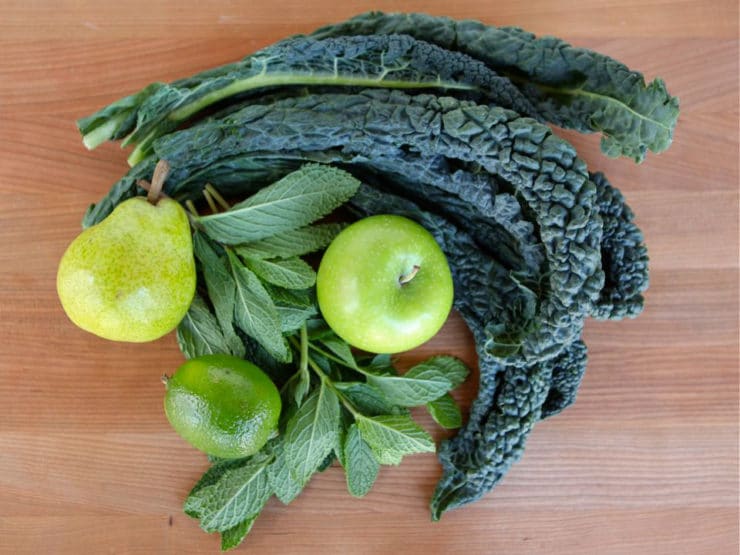 You will also need: A blender (powerful blender like a Vitamix is best, but any countertop blender will do)

Nutrition Facts
The Greenie
Amount Per Serving
Calories 123
% Daily Value*
Sodium 30mg1%
Potassium 482mg14%
Carbohydrates 31g10%
Fiber 5g21%
Sugar 17g19%
Protein 2g4%
Vitamin A 4835IU97%
Vitamin C 68.9mg84%
Calcium 112mg11%
Iron 1.5mg8%
* Percent Daily Values are based on a 2000 calorie diet.
Tried this recipe?Let Us Know How It Was In The Comments.
4.7 from 25 votes
Nutritional information should be considered an estimate only; please consult a registered dietician, nutritionist, or your physician for specific health-related questions. Read more here. Please note that the recipe above is published using a recipe card plugin, with preexisting software which can auto-calculate metric measurements, as well as change the number of servings. Metric conversions and changes to the number of servings (resulting in different ingredient amounts) will only appear in the ingredient list, and are not changed within the step-by-step directions of the recipe.
621shares