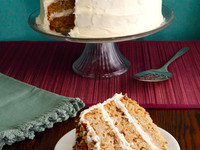 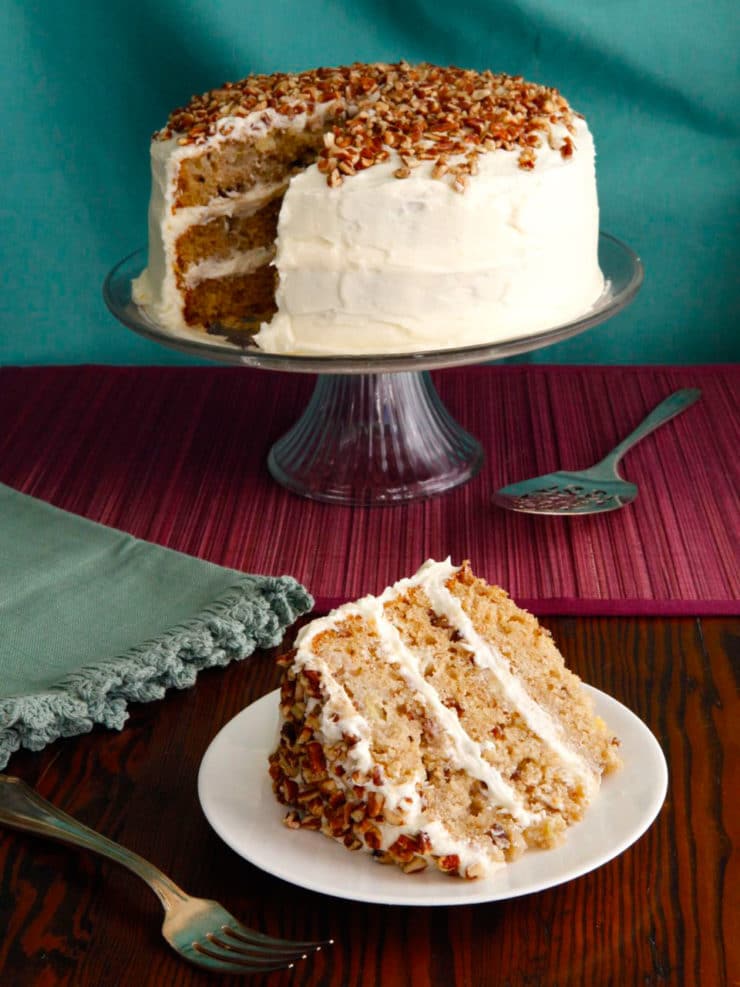 —Opening line of For Your Eyes Only by Ian Fleming (1960)

The earliest record of adding bananas to cake batter was in 1932. The idea of using canned crushed pineapple along with its liquid in a batter (without any bananas) dates back to around the same time in the Great Depression to 1930 and “paradise cake” (also containing chopped dates, nuts, and cinnamon). (Pineapple upside-down cake, with canned slices on the bottom/top, showed up a few years earlier in 1923.) The novelty of combining both bananas and pineapple in a cake first appeared in print in America in the early 1970s. 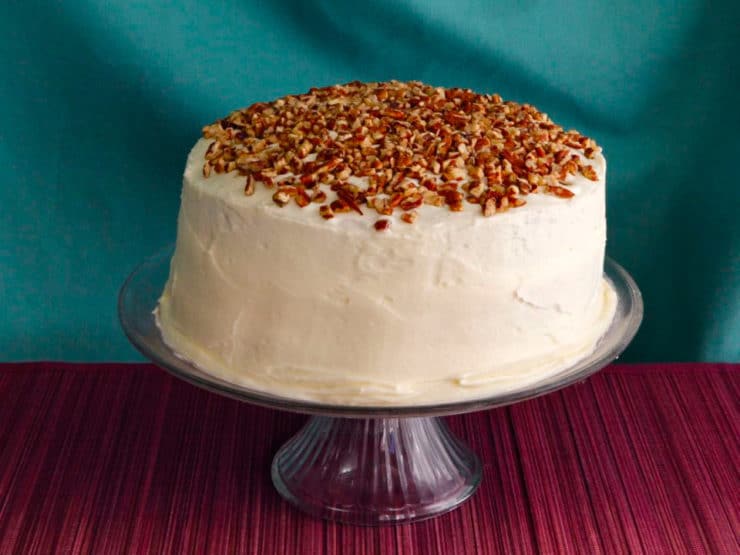 Although now entrenched in the American South, this treat originated as “doctor bird cake” in the late 1960s, without any frosting, somewhat further south — on the island of Jamaica. “Doctor bird” is a Jamaican nickname for its national fowl, the Red-billed Streamertail, a member of the hummingbird family. The nickname purportedly arose because the bird probes a flower with its long beak reminiscent of a doctor examining a patient. According to legend, its association with the cake stemmed from the cake being so sweet with fruit and sugar as to attract hummingbirds. Or the yellow streaks reminded people of those birds. Others contend the cake tastes so delicious it makes people hum like a bird. Most probably both the cake and its name originated as a Jamaican marketing ploy. After Air Jamaica was established in October 1968, the new company chose the beloved doctor bird as its logo. Shortly thereafter, the Jamaica Tourism Board distributed recipes to the foreign media showcasing various ‘local’ dishes aimed for American consumers and intended to attract American visitors to the island, as reported in the March 29, 1969 issue of the Kingston Daily Gleaner (Jamaica): “Press kits presented included Jamaican menu modified for American kitchens, and featured recipes like the doctor bird cake, made from bananas.”

Within a few years, doctor bird cake -— some Southerners opted to use the spelling Byrd, a familiar regional name dating back to early Virginia –- began showing up in American small-town newspapers and community cookbooks. The February 26, 1972 issue of the Mexico Ledger (Mexico, MO) contained a trio of identical banana-pineapple recipes, baked in a tube pan and absent any nuts or frosting, variously appearing under the titles “Doctor Bird Cake,” “A Cake That Doesn’t Last,” and “Tropical Treat Cake.” 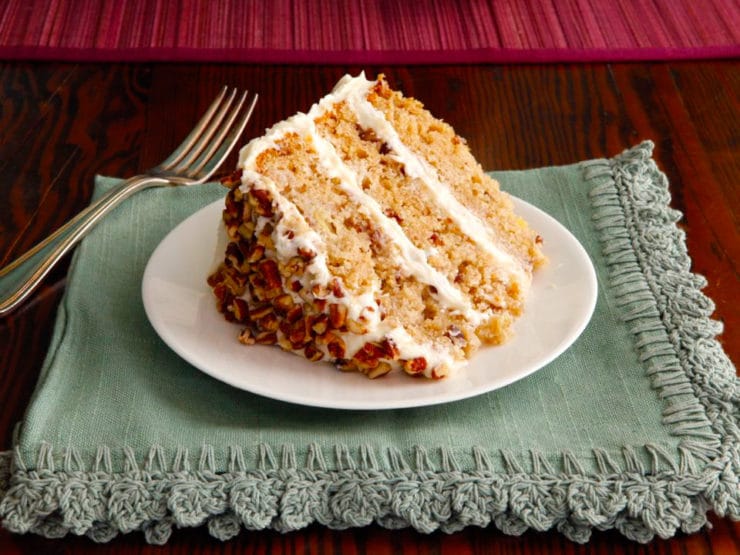 The term hummingbird cake made its earliest appearance in the March 1, 1972 Edwardsville Intelligencer (IL) in an ad (page 10) for a cafeteria from nearby Saint Louis: “Humming Bird Cake $2.85.” Later ads described it as “A moist, delicious-ring cake made with crushed pineapple and bananas.” A few years later, the June 13, 1976 issue (page 14) of the Port Arthur News (TX) reported on the first runner-up in the cakes division in the 19th Annual News Cookbook: “Mrs. Scott B. Herrin Jr. with her rendition of Hummingbird Cake.” (It lost to Sour Cream Rhubarb Squares.) A few days later in the June 16 issue, The Port Arthur News followed up: “Mrs. Herrin’s recipe for Hummingbird Cake already proved its ‘prize worthiness’ around The News offices as one employee baked her recipe and brought it for everyone to taste. The cake lasted for only a short while. At any rate, Mrs. Herrin was indeed a winner and so was the delicious Hummingbird Cake.”

In response to an April 1977 reader request for a “Hummingbird Cake,” the May 19, 1977 Washington Post included a recipe — calling for “nuts ½ cup” and baked in a “tube of Bundt pan” — ending: “For the icing, use a cream cheese-type topping, or none at all.” The cake fortuitously reached the United States corresponding to the time when Americans began pairing carrot cakes with cream cheese frosting, which became the standard accompaniment to hummingbird cake as well. The sweet and slightly tangy cream cheese frosting enhances the flavor of the cake’s fruit. After a recipe for “Hummingbird Cake,” featuring three layers and replete with “pecans or walnuts” and cream cheese frosting, submitted by Mrs. L.H. Wiggins of Greensboro, North Carolina, appeared in the February 1978 Southern Living magazine, it quickly became a Southern classic. In 1978, according to The Kentucky Derby Museum Cook Book (1986), a hummingbird cake won the blue ribbon at the Kentucky State Fair. 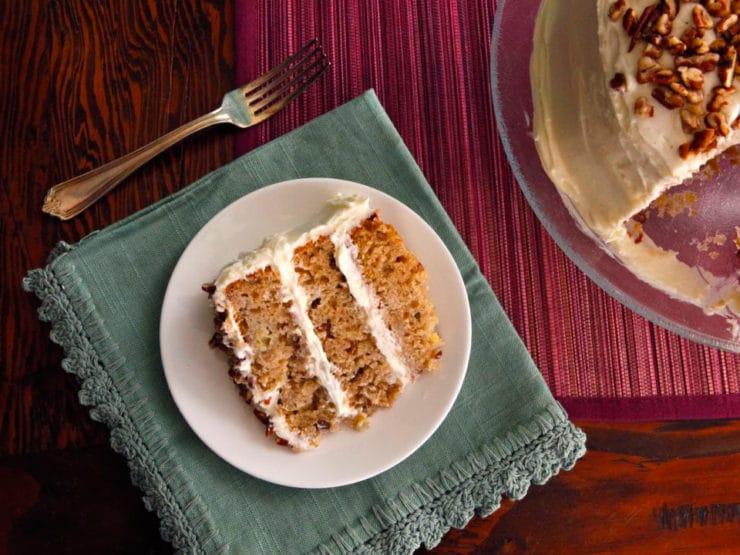 A variation with canned crushed pineapple and without bananas and frosting, baked in a 13- by 9-inch pan, was entitled “Granny Cake” in Aluminum Light by the Aluminum Workers International Union (1978). Toward the end of the 20th century, the pineapple version of hummingbird cake (banana-less, but sometimes adding coconut) — usually with a cream cheese frosting — was called the prosaic “crushed pineapple cake”; “Oklahoma cake” (I haven’t the faintest idea of the connection between the Sooner State and pineapple, although pecans are cultivated there); and “preacher cake” (purportedly because all of the ingredients were in the typical pantry and could be whipped up in a hurry when someone important, like the preacher, paid an unannounced visit). Preacher cake –- not having to depend on ripe bananas in the house — certainly became a fixture at many church gatherings.

Unlike traditional banana cakes, the fruit in hummingbird cake is usually left in pieces rather than mashed, providing texture and bursts of flavor, along with the pineapple and nuts. The batter is mixed in a single bowl by hand, as beaters would impair the texture. The following recipe, in the classic Southern style, uses a rather generous amount of frosting. You can certainly halve the frosting recipe or, for a simpler and dairy-free presentation, omit the frosting and sprinkle the cake with confectioners’ sugar. Some Southern cooks like to add a splash of bourbon to the frosting (and almost anything else).

In some American homes, hummingbird cake became a traditional special occasion dessert, including Thanksgiving, Christmas, New Year’s, Easter, Mother’s Day, and birthdays. It is also a favorite at informal events, such as picnics, potlucks, and funerals. No birds were harmed in the preparation of this cake!

THK asks... are you baking anything fun for Memorial Day weekend? 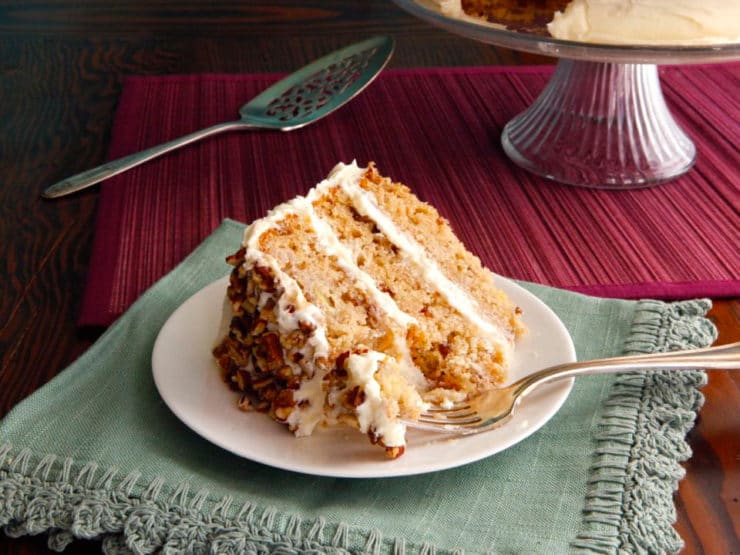 Nutrition Facts
Hummingbird Cake (Banana-Pineapple Cake)
Amount Per Serving
Calories 715 Calories from Fat 234
% Daily Value*
Fat 26g40%
Saturated Fat 14g88%
Cholesterol 96mg32%
Sodium 332mg14%
Potassium 239mg7%
Carbohydrates 116g39%
Fiber 2g8%
Sugar 93g103%
Protein 6g12%
Vitamin A 820IU16%
Vitamin C 5.8mg7%
Calcium 51mg5%
Iron 1.7mg9%
* Percent Daily Values are based on a 2000 calorie diet.
Tried this recipe?Let Us Know How It Was In The Comments.
5 from 18 votes
Nutritional information should be considered an estimate only; please consult a registered dietician, nutritionist, or your physician for specific health-related questions. Read more here. Please note that the recipe above is published using a recipe card plugin, with preexisting software which can auto-calculate metric measurements, as well as change the number of servings. Metric conversions and changes to the number of servings (resulting in different ingredient amounts) will only appear in the ingredient list, and are not changed within the step-by-step directions of the recipe.
2102 shares