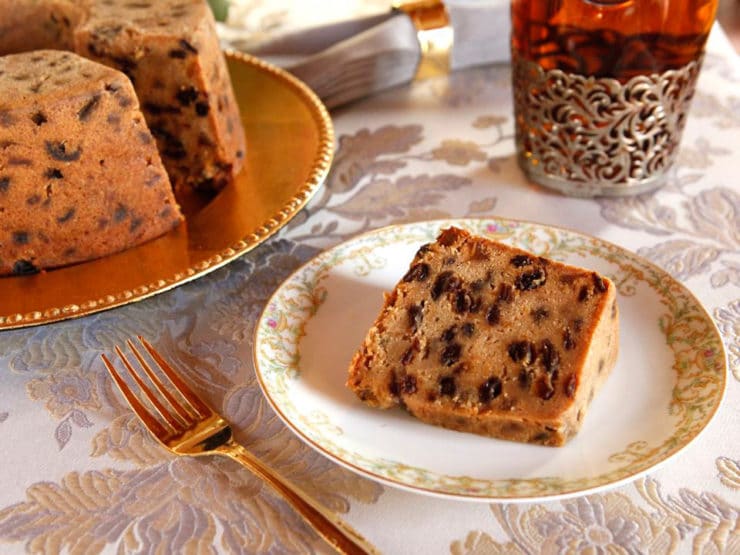 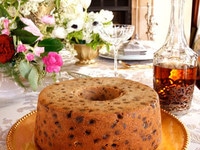 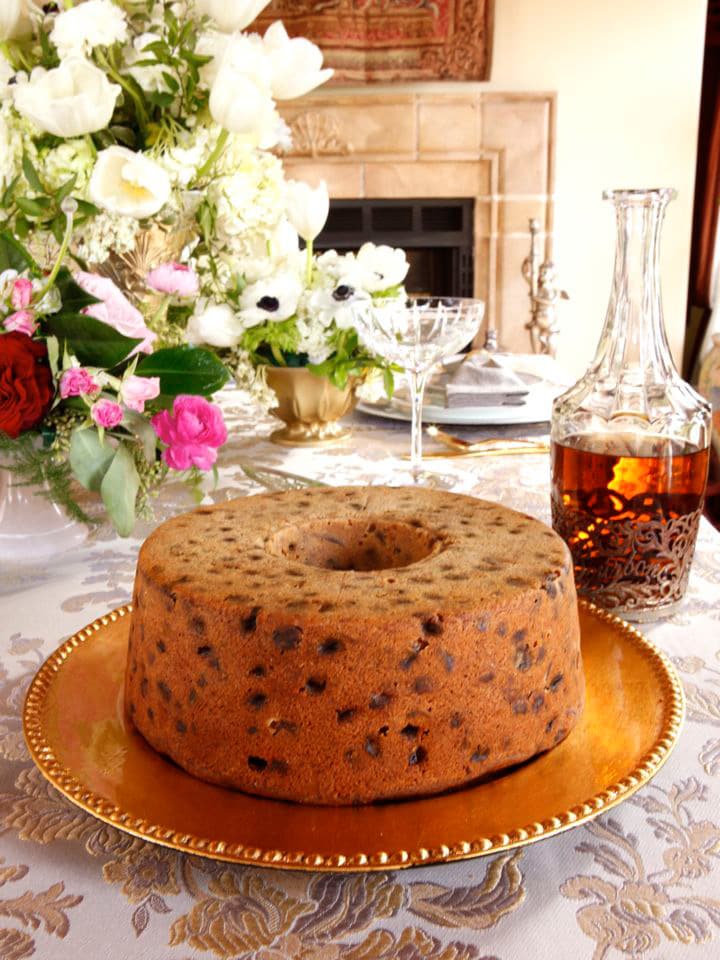 Bourbon cake, also known as whiskey cake, is a pecan-laden butter cake using bourbon as the liquid –- an adaptation of classic English fruitcakes. There are several variations on the basic recipe, most entailing the amount of nuts and presence or lack thereof of raisins and other fruit. The dreamy taste combinations make it a sensual and sensational treat.

When the Dutch established a distillery in 1640 on what is now Staten Island, New York, they started an important tradition in the New World. Subsequently, Scots and Irish brought their whiskey-making techniques to America, many settling in the Appalachians of western Pennsylvania. By the American Revolution, whiskey, distilled overwhelmingly in private stills (including at Mount Vernon), had become an integral part of American life. In 1791, the new federal government, in an effort to raise revenue, placed a tax on whiskey. Resistance was fierce, particularly in western Pennsylvania. A show of force by government troops ended the three-year uprising, named the Whiskey Rebellion, without bloodshed. However, to escape the reach of the revenuers, many distillers moved to the backwoods of western Virginia. A little more than a decade after the Revolution, frontiersmen discovered a new method of distilling corn mash and mellowing the spirits in charred oak barrels, producing a whiskey with a distinctive flavor and color – bourbon. 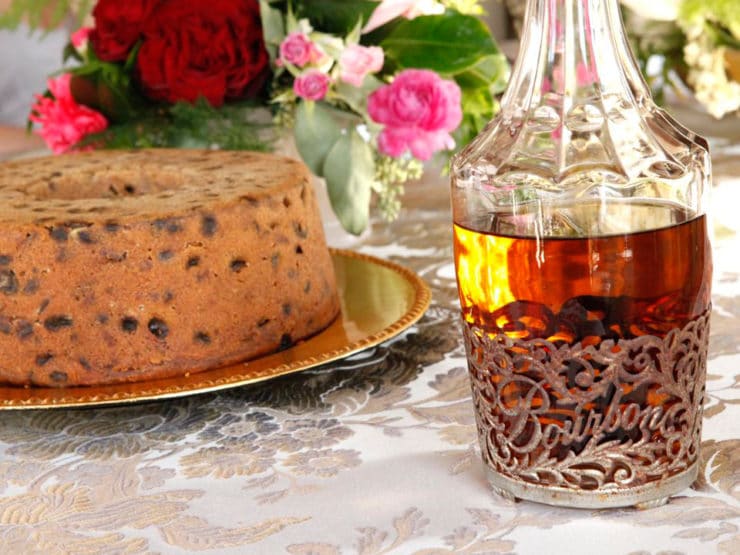 The origins of the manifestly American bourbon and the source of its foreign-sounding name lie in the lush green countryside of western Colonial Virginia -— now Kentucky. The remote region had difficulty attracting residents. Thomas Jefferson, during his term as governor of Virginia from 1779 to 1780, offered an incentive of 60 acres of land in Kentucky County to anyone who would build a permanent structure and raise corn. In 1780, Virginia’s huge Kentucky County was divided into three large counties, then five years later one of them, Fayette County, bordering southern Ohio and West Virginia, was divided into two: the northern section called Bourbon County, perhaps named in respect to the French role in the American Revolution. Since there was neither enough of a market in the area nor a means to transport the corn, the only practical way of using surplus ears was to make whiskey. Whereas rye remained the predominant American whisky until Prohibition, corn became king in the South.

The exact origin of bourbon remains a mystery. According to a popular legend, a Baptist minister named Elijah Craig created bourbon in Royal Spring (now Georgetown, Kentucky in Scott County) in 1789, although there is no evidence he ever lived in that area. One story claims bourbon was produced by accident when frontiersmen were sold barrels charred in a fire in a Jamaican barrel factory. Others insist amateur barrel makers on the frontier fashioned crude barrels by burning the staves to form the proper shape. Jacob Spears, a farmer who came from Pennsylvania and opened a distillery in Bourbon County in 1790, was purportedly the first to use the label “Bourbon whiskey.” The earliest printed record of the term was in an advertisement by Stout and Adams of Maysville in the June 26, 1821 issue of Bourbon County’s newspaper, The Western Citizen, for “Bourbon whisky by the barrel or the keg.”

According to the Federal Alcohol Administration Act of 1936, Straight Bourbon must be produced in the United States, made from at least 51 percent corn, distilled to no more than 160 proof, and aged at least two years in charred white-oak barrels. During aging in the barrels, a chemical reaction with the charcoal creates tannic acid, transforming the clear whiskey into a caramel hue and characteristic fruitiness. The various ingredients and steps -— the types and quality of the grain, differences in the water, the amount of diluting, and the barrels -— all have an effect on the unique character of each brand of bourbon. Bourbon’s flavor complements a wide variety of foods, especially pecans. 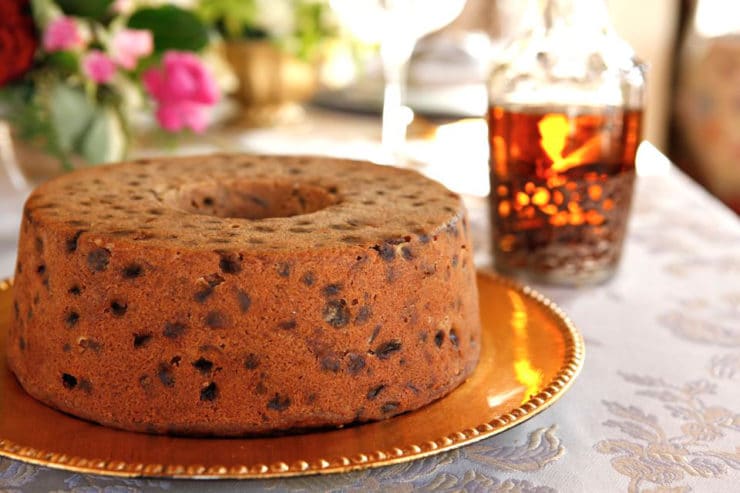 The original pecan, a native of the Mississippi Valley, was rather small with an extremely hard shell. Then in 1846, a slave by the name of Antoine on the Oak Alley Plantation north of New Orleans grafted a wild pecan seedling to existing pecan stocks, creating a superior variety with larger kernels and softer shells. Similar grafting techniques revolutionized the pecan industry, producing greater amounts of commercial quality nuts. Subsequently, pecans played a much more prominent role in American cookery, especially in the South.

Pecan cakes began showing up in American cookbooks in the 1880s (pecan pies made their appearance shortly thereafter), using either coarsely or finely chopped nuts. A butter cake version of “Pecan Cake,” using milk as the liquid, was included in La Cuisine Creole by Lafcadio Hearn (New Orleans, 1885). In Kentucky, these nut cakes, typically using bourbon, were commonly called pecan cake or whiskey cake. Reflecting the cookery of Kentucky at the onset of the 20th century and importance of pecan cakes, Kentucky Receipt Book by Mary Harris Frazer (Louisville, KY, 1903) -– perhaps best known for her early banana pudding recipe — offered six versions of “Pecan Cake” incorporating “whisky.” The Blue Grass Cook Book by Minnie C. Fox (New York, 1904) called for ‘whisky’ in a few cakes, including “Black Cake,” a classic fruitcake also containing jam; “Kentucky Cake,” a white pound cake; and “Pecan Cake (NO. 1),” the addition of plenty of raisins rendering it a fruitcake. In many instances, families picked the pecan or hickory nuts free from wild trees in nearby woods, distilled their own whiskey, and sometimes even forewent the imported raisins, constituting a relatively inexpensive treat.

As the recipe spread outside its native region in the 1940s, the name frequently became Kentucky bourbon cake and Kentucky whiskey cake. A prevalent 1943 advertisement for Aunt Martha’s Whiskey Cake, actually made in Pennsylvania (“$2.75 for a 1 lb., 10 oz loaf”), boasted “Epicurean gift,” “made from an 1820 recipe,” and “there’s a quart of quality Bourbon in every six pounds of batter.” In the 1940s and 50s, “Kentucky bourbon cake” was the most requested recipe from the food editor of the Louisville Courier-Journal.

Bourbon cake is a sweet, moist, very flavorful cake with a fine crumb. Unlike classic fruitcakes, this treat is heavier on the nuts and lighter on the fruit. Nutmeg commonly complements the other flavors. A cup of bourbon may seem like a lot, especially to Yankees, but any less and you don’t really taste it, which would be a shame. Bourbon also cuts the cloyingness of sugary fare and imparts a heady flavor and aroma, its sweetness and fruitiness marrying impeccably with the pecans and sugary fruit. So if you want to substitute juice or milk for the bourbon, I strongly suggest you try a different nut cake. A “Texas pecan cake” eschews the whiskey and adds lemon extract and candied cherries and usually dates and candied pineapple.

In Kentucky, whiskey cake became a standard Christmas and New Year’s Day treat, alongside cold eggnog (containing, of course, plenty of bourbon) and hot Wassail, when on both occasions many families hold an open house for family and friends. It is also commonplace on Thanksgiving and for the Kentucky Derby (first Saturday in May). Some families ate a fresh pecan cake for Thanksgiving, then wrapped the others in bourbon-soaked cheesecloth and let them age till Christmas and New Year’s. The batter can be baked in a tube pan, springform pan, or loaf pan, but some cooks bake and store the cakes in greased 13-ounce or 1-pound coffee cans to distribute as gifts. Whiskey cake was also once a prominent fixture at local political rallies, literally the highpoint of the occasion. April 14 is National Pecan Day and June 14 is National Bourbon Day, either an excellent opportunity for enjoying bourbon cake. 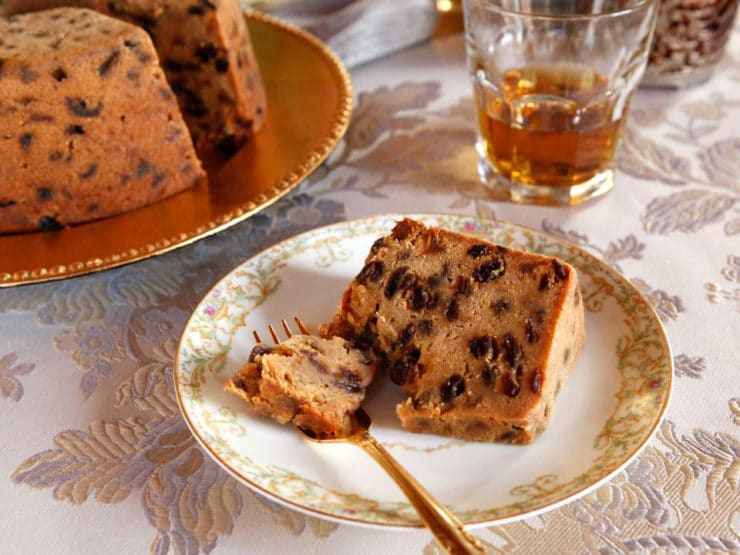 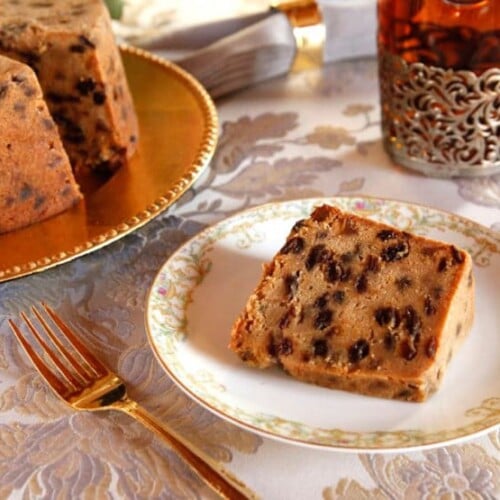 Nutritional information should be considered an estimate only; please consult a registered dietician, nutritionist, or your physician for specific health-related questions. Read more here. Please note that the recipe above is published using a recipe card plugin, with preexisting software which can auto-calculate metric measurements, as well as change the number of servings. Metric conversions and changes to the number of servings (resulting in different ingredient amounts) will only appear in the ingredient list, and are not changed within the step-by-step directions of the recipe.
961 shares
Citrus Avocado Salad with Poppy Seed Dressing PREVIOUS

How to Clean and Season a Cast Iron Pan NEXT