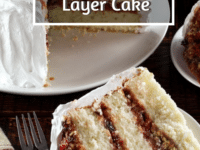 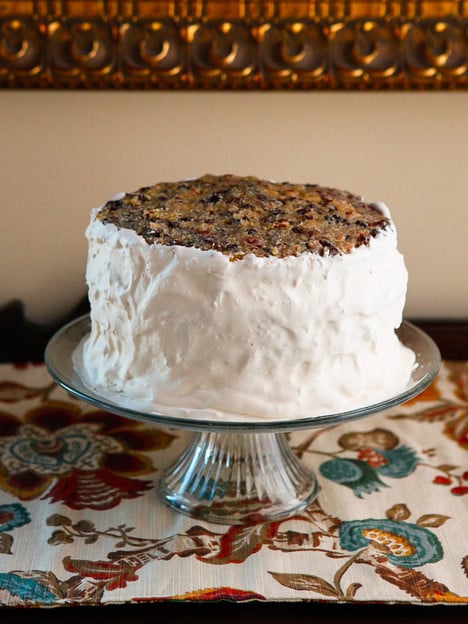 “Miss Maudie Atkinson baked a Lane cake so loaded with shinny it made me tight.”

– To Kill a Mockingbird. Author Nelle Harper Lee (1960), a native of Monroeville, Alabama, presented a picture of Southern culture in the mid-20th century, with numerous vestiges of life in the Deep South and Southern foods including Lane cake.
[Shinny = slang for liquor, derived from moonshine]

Lane cake is a four-layer (though some prefer three) white cake with a thick bourbon-laced raisin filling. The egg whites are used for making the vanilla butter cake and the egg yolks for the custard filling.

Emma Rylander Lane (d. April 25, 1904) of Clayton, Alabama in Barbour County introduced the now classic treat bearing her name in her self-published and extremely hard to find 1898 cookbook, A Few Good Things to Eat (the more easy to find 1989 reprint was renamed Some Good Things to Eat). Lane cake appeared shortly before the advent of another classic Southern layer cake — but not the same — Lady Baltimore cake of Charleston, South Carolina (1903) and after the Robert E. Lee cake (lemon curd filled cake) and coconut cakes; the spread of regulated ovens and the rotary beater spurring the proliferate of fluffy white cakes. In her book, Lane entitled the concoction “Prize Cake,” as it had won first prize at a baking contest at a country fair in Columbus, Georgia – about 60 miles from her home in Americus. William Faulkner, a native of Mississippi, in his novel Intruder in the Dust (1948) wrote of a trend in Southern culture: “…this happened two or three terms ago back in the twenties, a Frenchman’s Bend lady naming no names at feud with another lady over something which began (we understood) over the matter of a prize cake at a church supper bazaar….” The concoction eventually and indelibly took on the name of its creator. 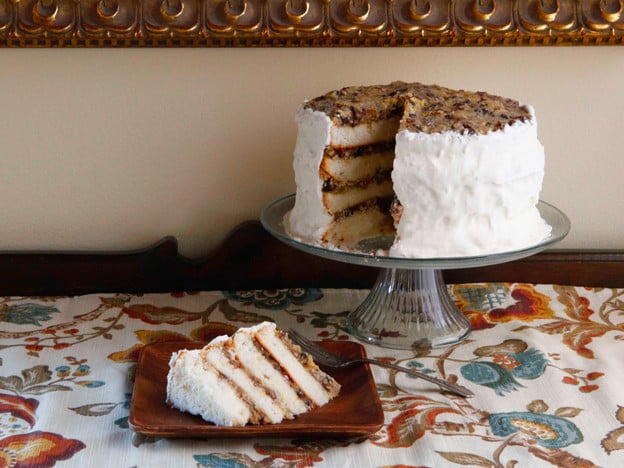 For many decades, Lane cake primarily remained the province of a small swatch of the Deep South -– Georgia, Alabama, and Mississippi. “Lane Cake” was included in Atlanta Woman’s Club Cook Book (1921), attributed to “Mrs. W. C. Lane of Roanoke, Ala”; with chopped walnuts added to the filling and no mention of a frosting. “Lane Cake” was added to the revised edition of the classic Southern Cooking by Henrietta Stanley Dull (New York, 1941); it was not in the original 1928 edition, as it had yet to become widespread — Dull’s 1928 recipe for “Canton’s Prize Cake” was a white cake baked as either a loaf or layers and lacking any filling information. Then recipes appeared in national cookbooks and, of course, its 1960 mention in To Kill a Mockingbird.

The base for Lane cake is an egg white variation of the classic 1-2-3-4-cake, resulting in a sponge cake-like texture, and a raisin filling derived from the 1870s Minnehaha cake. In her rendition, Mrs. Lane instructed: “Bake in four layers, using medium-sized pie tins, with one layer of ungreased brown paper in the bottom of each tin.” The original version contained only raisins (“seeded and finely clipped”) in the custard filling, but subsequent cooks commonly embellished it with pecans and frequently coconut and candied fruit reminiscent of a fruitcake. Lane directed “one wine-glass of good whiskey [denoting bourbon] or brandy” for the filling. The liquor helps to cut the cloyingness of the filling and to moisten and preserve the cake akin to a classic fruitcake. Mrs. Lane insisted that the cake named after her “is much better made a day or two before using.” 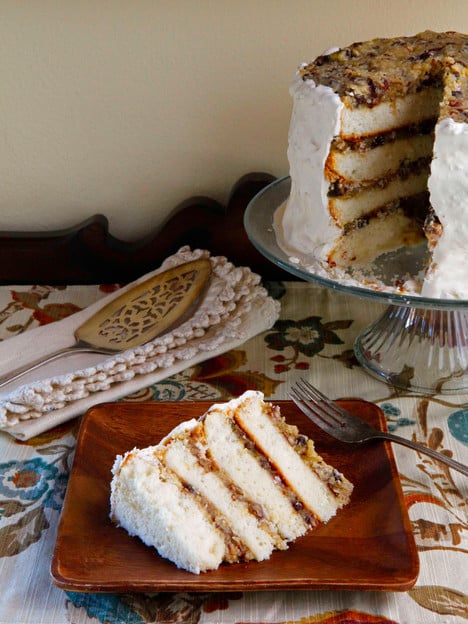 Lane’s original prize cake called for “Boiled White Frosting (from a standard recipe), covering the top and sides with the frosting,” without including the frosting recipe. Some subsequent versions omitted any frosting, simply topping three layers with the dark filling. Most modern Lane cakes, in the Southern manner, call for a fluffy white frosting. You can use seven-minute frosting or whipped cream cheese frosting or substitute yellow cake for the white layers.

As in To Kill a Mockingbird, distinctive layer cakes were whipped up by Southerners for significant life events and company. In many Southern homes, Lane cake became, in particular, a traditional Christmas treat as well as a favorite at Thanksgiving, Valentine’s, birthdays, anniversaries, bridal showers, church suppers, and other noteworthy occasions. Lane cake is truly a taste of the Deep South with more than enough sugar and shinny to lift anyone’s spirits. 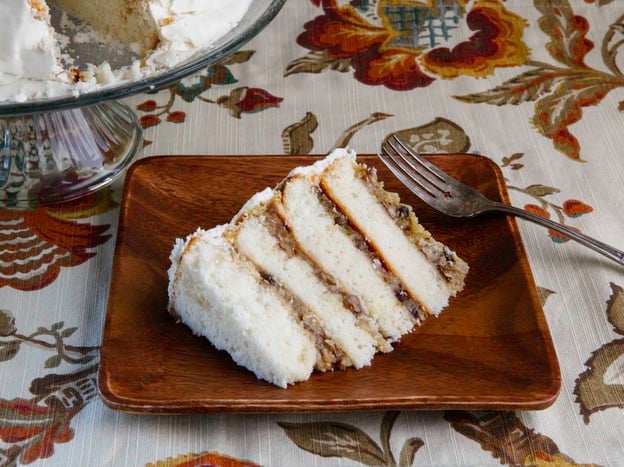 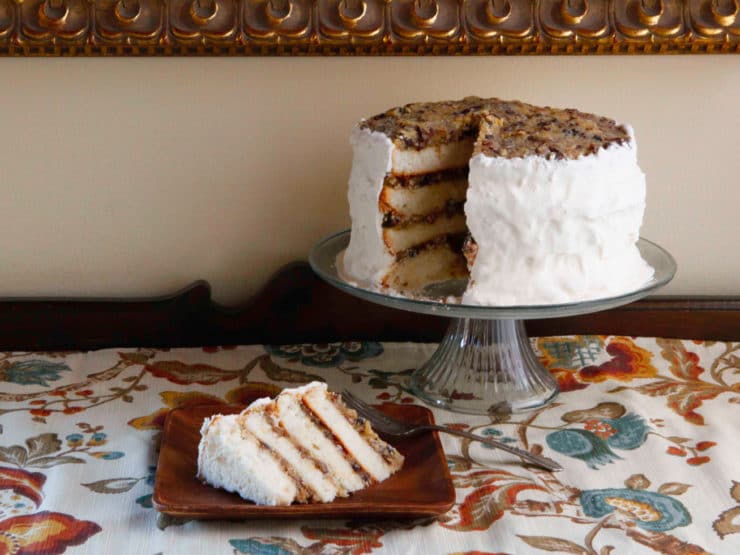 You will also need:  three 9- by 1½-inch round baking pans or two 9- by 3-inch round baking pans or springform pans, parchment paper, mixing bowls, stand mixer or hand mixer, cooling rack, 2-quart saucepan, wooden spoon, candy thermometer VARIATIONS Orange-Spice Lane Cake: In the filling, add 1 teaspoon finely grated orange zest, ¼ teaspoon ground mace, and 1/8 teaspoon ground cardamom. Alcohol-Free Lane Filling: This does not have the keeping power, due to the absence of liquor, as the traditional version. In the filling, omit the bourbon and increase the sugar to 1½ cups (10.5 ounces/300 grams). Add 1 cup evaporated milk with the butter and cook over medium heat, stirring constantly, until slightly thickened. Stir in the fruits and nuts. Store the cake in the refrigerator.

To make the cake:

To make the filling:

To make the frosting:

Nutrition Facts
Lane Cake
Amount Per Serving
Calories 651 Calories from Fat 252
% Daily Value*
Fat 28g43%
Saturated Fat 15g94%
Cholesterol 139mg46%
Sodium 108mg5%
Potassium 335mg10%
Carbohydrates 88g29%
Fiber 2g8%
Sugar 57g63%
Protein 8g16%
Vitamin A 685IU14%
Vitamin C 0.7mg1%
Calcium 95mg10%
Iron 1.2mg7%
* Percent Daily Values are based on a 2000 calorie diet.
Tried this recipe?Let Us Know How It Was In The Comments.
5 from 8 votes
Nutritional information should be considered an estimate only; please consult a registered dietician, nutritionist, or your physician for specific health-related questions. Read more here. Please note that the recipe above is published using a recipe card plugin, with preexisting software which can auto-calculate metric measurements, as well as change the number of servings. Metric conversions and changes to the number of servings (resulting in different ingredient amounts) will only appear in the ingredient list, and are not changed within the step-by-step directions of the recipe.