The History of Chicken and Waffles 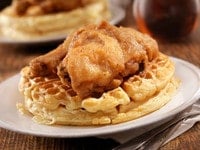 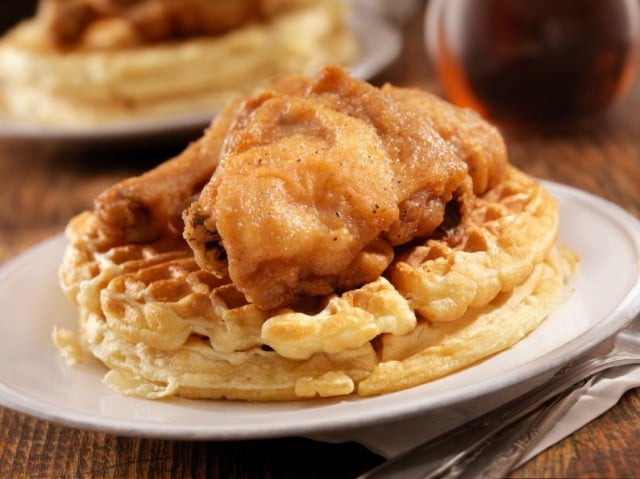 If you’ve ever tried the unlikely pairing of chicken and waffles, you understand the appeal. It’s a delectable union of sweet and salty, soft and crunchy, maple and… chicken? I realize it might sound strange to the uninitiated. As somebody who has repeatedly enjoyed this improbable creation, I must insist– don’t knock it till you’ve tried it. Chicken and waffles are a dynamic culinary duo.

To explore the history of this dish, we can start by breaking it down into its two basic elements – fried chicken and waffles. Let’s start with fried chicken, which shows up in its earliest form as a fricassee—fried chicken pieces braised in sauce. Fricassee was popular in the Mediterranean basin during the medieval period. To make fricassee required an iron pot, meat, and fat, all of which were readily available during the time period. By the 1300’s, friquasée, a combination of the French words for “fry” and “break,” began appearing in French culinary writings. Early cookbooks like Le Viandier feature recipes for fricassee that can be made with any meat, not just chicken. By the 17th century, recipes more frequently called for chicken. In fact, first lady Martha Washington had two recipes for fricassee in her recipe collection, one of which requires a half pound of butter to fry two cut-up chickens. Another popular cookbook of the colonial time period, The Art of Cookery by Hannah Glasse, features a recipe for “Brown Fricasey,” a dish of chicken pieces coated first with egg, then spiced breadcrumbs, then fried in butter. Starting to sound familiar? Once the chicken was done frying to a crispy brown, it was doused with a healthy serving of gravy, mushrooms and pickles. Glasse’s preparation went on to influence many other recipes, included the breaded and fried chicken we are familiar with today.

From the colonial period through the early 1800’s, African slaves were doing most of the cooking in Southern kitchens. At that time, chicken was considered a prestigious food within the African American community, and it was more expensive than some other meats. Enslaved cooks would make fricassee recipes from the popular cookbooks of the time period, or they’d take it upon themselves to fry the chicken in the way they knew best. When the Civil War began and men left their homes to become soldiers, fried chicken took on a new significance. The frying process made chicken less prone to spoilage, allowing women to send it to soldiers fighting in the battlefield.

In 1881, in her book What Mrs. Fisher Knows About Old Southern Cooking, African American cook Abby Fisher shared a recipe for fried chicken. Her version involves flour, fat, and a finishing of thin gravy. By then, most fried chicken recipes had moved beyond the fricassee, and did not require an extra braise in sauce at the end of cooking.

With the advent of the automobile, roadside diners and restaurants began appearing in droves, and fried chicken was on most menus. In the 1940s, Harlan Sanders developed his signature fried chicken recipe. By 1952, the Kentucky Fried Chicken franchise helped to make fried chicken a common treat in households across the country.

Waffles, believe it or not, are related to the wafer that is offered during communion. During the Middle Ages bakeries began to make communion wafers, attempting to compete with monasteries. The secular waffle was developed using the same method that was used to make wafers, by baking a thin cake between two metal plates. Waffles quickly became a popular street food, given they could easily be made with flour and water. More exclusive versions for the wealthy would add honey or eggs. Waffle irons were engraved with various designs, from coats of arms to the plain honeycomb pattern we recognize today.

The earliest American chicken and waffle combination appears in Pennsylvania Dutch country during the 1600’s, when home cooks made waffles and topped them with pulled chicken and gravy. A different, decidedly soul food approach to the pairing worked its way into popular culture much later with the opening of Wells Supper Club in Harlem, New York. The restaurant, known simply as “Wells” to regulars, opened in 1938. Wells became a late night hotspot for jazz musicians, who would stop by late at night after their various gigs. The musicians, arriving too late for dinner but too early for breakfast, enjoyed the appetizing compromise of fried chicken and waffles. Before long, Wells was frequented by the likes of Sammy Davis Jr. and Nat King Cole (who held his wedding reception there).

Wells managed to inspire a nationwide trend. In 1976, a Harlem native named Herb Hudson opened a Los Angeles restaurant dedicated exclusively to the pairing: Roscoe’s House of Chicken and Waffles. Hudson’s Motown connections helped to launch the restaurant, making it a popular destination for music industry professionals and performers in the Los Angeles area. Over the years, the restaurant has become an established part of the Hollywood food landscape. Roscoe’s is so well known, in fact, that President Obama took time out of his busy schedule in 2011 to make an unscheduled stop there. In case you’re curious, he ordered the “Country Boy,” Number 9– three wings with choice of waffle, potato salad or French fries. Here’s hoping he chose the waffle.

Gladys Knight, a patron of the original Wells, started her own chain with gospel singer Ron Winan in 1996—Gladys and Ron’s Chicken and Waffles. Other soul food restaurants feature chicken and waffles on the menu, including Lo-Lo’s in Arizona and Lucky J’s in Texas. Thomas Keller’s famed restaurant Ad Hoc in Napa has been known, on occasion, to serve lemony fried chicken with crispy and delicate waffles. And in Harlem, Melba’s Restaurant serves up eggnog waffles with strawberry butter and buttermilk fried chicken. While it may sound strange, Melba’s combination is so tasty that she beat out celebrity chef Bobby Flay in a chicken and waffles “Throwdown” on Food Network.

So what is it about chicken and waffles that has caused such a stir over the years? Is it that crispy seasoned chicken skin? The fluffy waffles enveloped in melting pads of butter? That warm, sweet syrup drizzled over the top? Or is it that first bite, when all of the ingredients come together in perfect, soul-stirring harmony?

While you ponder that, I’m headed to the kitchen to whip up a homemade batch of chicken and waffles.

To check out my  recipe for Chicken and Waffles, click here.

Nutritional information should be considered an estimate only; please consult a registered dietician, nutritionist, or your physician for specific health-related questions. Read more here. Please note that the recipe above is published using a recipe card plugin, with preexisting software which can auto-calculate metric measurements, as well as change the number of servings. Metric conversions and changes to the number of servings (resulting in different ingredient amounts) will only appear in the ingredient list, and are not changed within the step-by-step directions of the recipe.
93 shares
How to Clarify Butter PREVIOUS

Chicken and Waffles NEXT