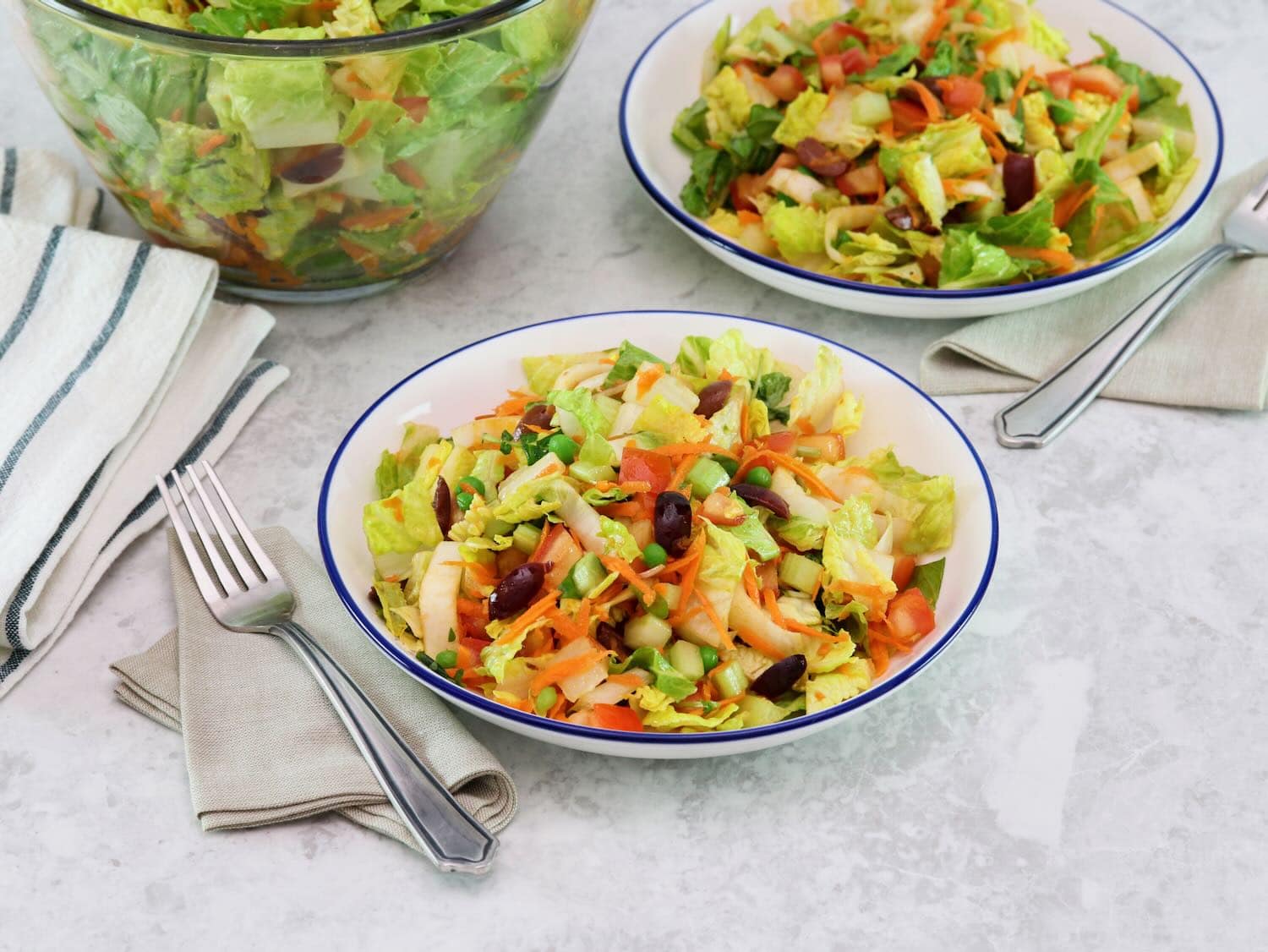 Learn about the life of Judy Garland and celebrate her birthday with her very own crisp vegetable salad recipe with homemade French dressing.
1.1K shares
5 from 1 vote
Jump to Recipe Email Me Recipes 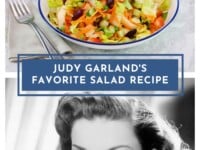 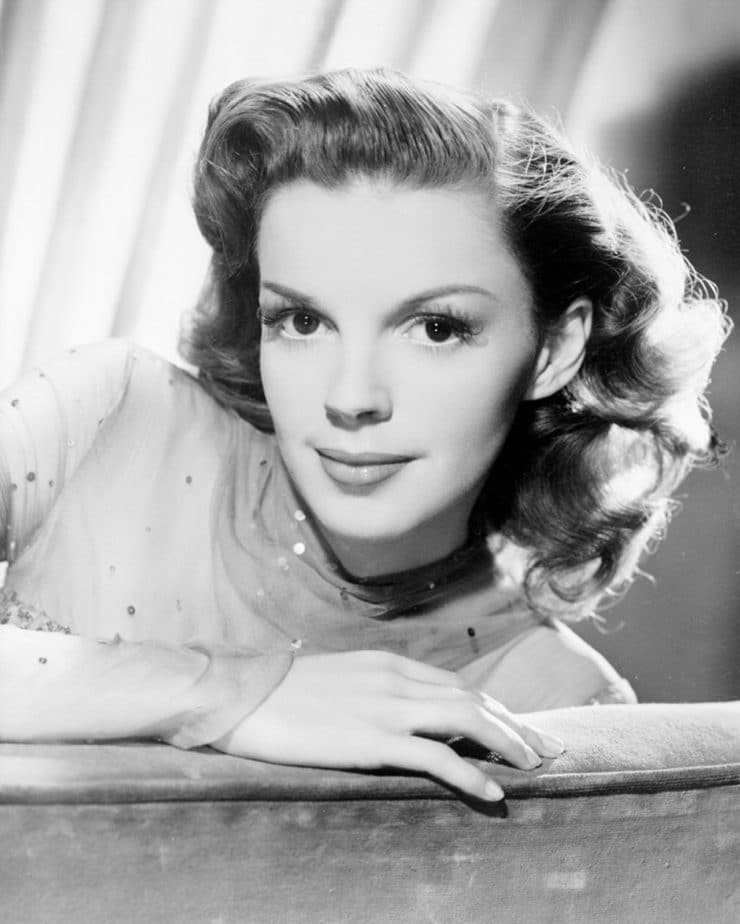 The incomparable Judy Garland was born Frances Ethel Gumm on June 10, 1922 in Grand Rapids, Minnesota. Her parents, Ethel and Frank Gumm, were former vaudeville actors, so it’s no surprise that Judy’s stage career got started when she was very young. In 1926 the Gumms relocated to California where she and her two older sisters, Susie and Jimmie, took lessons in acting and dancing and Ethel served as manager and agent for her daughters. When Judy was just 6, the girls began performing vaudeville acts under the name “The Gumm Sisters.” Judy stood out as Baby Gumm and audiences were very impressed with this small child’s phenomenal voice. Though her acting career was extraordinary, Judy Garland will always be remembered for her gifted singing abilities.

According to Gerald Frank’s biography Judy, the Gumm Sisters became the Garland Sisters in 1934 when George Jessel, the master of ceremonies at a performance in Chicago, suggested that their name was better suited to a comedy act. The inspiration behind the Garland name came from Jessel’s friend Robert Garland who, at the time, was the theater critic for New York’s World Telegram. The name had a nice to ring to it and, as we now know, it stuck. Eventually, “Baby” shed her adolescent nickname as well and took on the decidedly more mature “Judy.”

The following year, Judy’s life began to change in some very big ways. She first became a solo act and then signed a big studio contract with Metro-Goldwyn-Mayer at age 13. The contract was offered without a screen test, which was unheard of at the time. It was a lucrative contract, starting at $100 a week and increasing to $1000 a week by Judy’s 20th birthday. Because she was a minor, MGM was also responsible for Judy’s education until she turned 18. 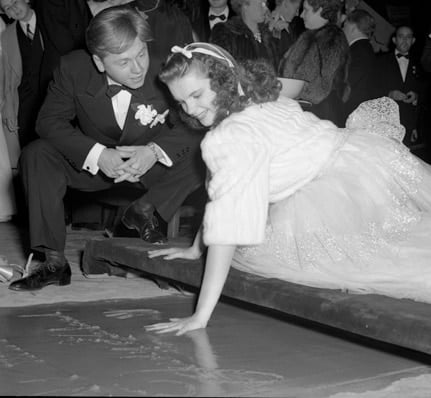 Several weeks after signing her MGM contract, Judy suffered her first great loss when her father passed away from spinal meningitis. Despite this family tragedy, Judy’s film career began to blossom. Some of her earliest roles were opposite Mickey Rooney. Audiences loved the pair and they went on to star in several films together, including Love Finds Andy Hardy, Babes in Arms and Strike Up the Band. In a 1992 documentary miniseries, MGM: When the Lion Roars, Mickey described his relationship with his beloved costar:

“Judy and I were so close we could’ve come from the same womb. We weren’t like brothers or sisters but there was no love affair there; there was more than a love affair. It’s very, very difficult to explain the depths of our love for each other. It was so special. It was a forever love. Judy, as we speak, has not passed away. She’s always with me in every heartbeat of my body.”

At fifteen years old, Judy Garland was given the iconic role that would make her a household name – Dorothy in The Wizard of Oz. She had been at MGM for two and a half years and made six movies before playing Dorothy in 1939. Shirley Temple was originally considered for the role; at that time Shirley was a more established actress, and would have provided box office insurance for the big budget film. However, it was ultimately Judy’s angelic voice that won over studio executives. Her performance earned her an honorary Academy Juvenile Award at the 1940 Academy Awards ceremony. To this day, Judy is most remembered for her role in The Wizard of Oz.

On September 25, 1940, Judy’s new contract with MGM was filed in Superior Court, raising her to $2,000 per week. Though she was considered one of MGM’s biggest stars and was paid accordingly, the difficulties of the film industry took their toll on Judy. At a young age, the MGM studio system put her through an array of cosmetic “improvements,” capping her teeth, restructuring her nose, corseting her waist and pressuring her to be thin. She went through several failed marriages and often turned to drugs in order to keep her weight down and her energy level up. Despite these challenges, Judy was able to successfully rebuild her career more than once. After being dropped from her contract at MGM in 1950, she once again found her place in front of an audience when she starred in her own Broadway show. She eventually returned to the big screen and was honored with two more Academy Award nominations, one for A Star is Born (1954) and another for her supporting role in Judgment at Nuremberg (1962).

On June 22, 1969, at the young age of 47, Judy Garland passed away from an accidental overdose. She left behind three children from previous marriages. Her two daughters, Liza Minnelli and Lorna Luft, are both successful singers and actresses in their own right. Though it has been over 40 years since she passed, Judy Garland is still regarded as one of the greatest performers of all time.

In honor of Judy’s birthday, I was inspired to make a recipe that she might have enjoyed during her lifetime. I found one in my copy of What Actor’s Eat When They Eat! by Rex Lease and Kenneth Harlan. This cookbook was published in 1939, the same year The Wizard of Oz premiered, which means Judy would have only been 16 or 17 at the time. The recipe is for a lovely vegetable salad topped with homemade French dressing, perfect for a light summer meal or side. Here is Judy’s page in the cookbook, which includes a short bio. According to the introduction, her early ambition in life was to be an attorney. I can’t help but wonder if Judy’s life would have been easier had she taken this route, without the constant pressures of the studio system. Selfishly, I feel lucky that she didn’t become an attorney— what beautiful performances we would have missed out on! 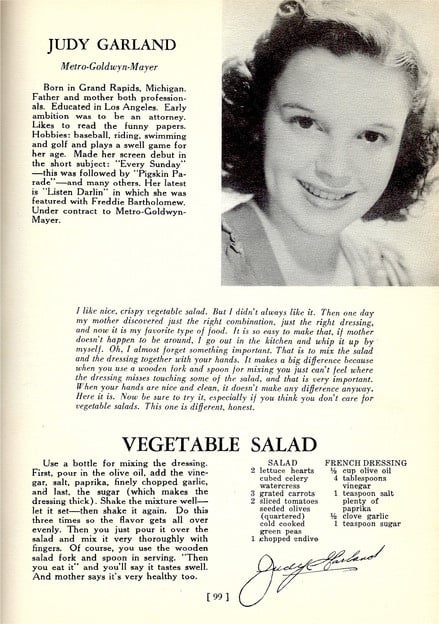 Of this recipe, Judy says:

“I like nice, crispy vegetable salad. But I didn’t always like it. Then one day my mother discovered just the right combination, just the right dressing and now it is my favorite type of food. It is so easy to make that, if mother doesn’t happen to be around, I go out in the kitchen and whip it up by myself. Oh, I almost forget something important. That is to mix the salad and the dressing together with your hands. It makes a big difference because when you use a wooden fork and spoon for mixing you just can’t feel where the dressing misses touching some of the salad, and that is very important. When your hands are nice and clean, it doesn’t make any difference anyway. Here it is. Now be sure to try it, especially if you think you don’t care for vegetable salads. This one is different, honest!”

I enjoyed the salad, which has lots of crisp fresh vegetables and several layers of flavor. I’ve written out a more specific recipe below (Judy’s is somewhat vague with regards to ingredient amounts). I tweaked a few things here and there for flavor; my changes are clearly noted in the recipe, so you can stick to the original if you prefer. I’m not a huge fan of peppery watercress, but it is quite healthy. If you like peppery greens, feel free to add more to the mix. 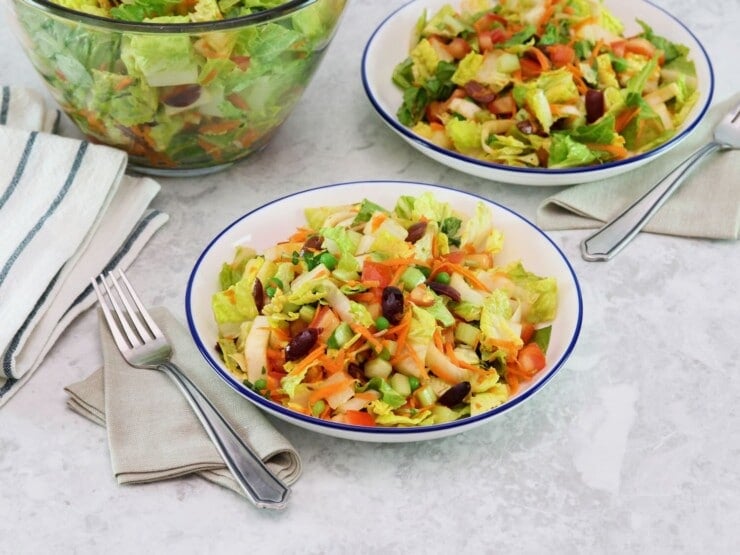 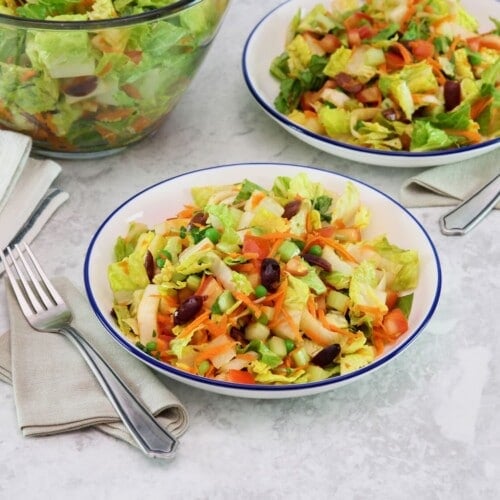 Nutritional information should be considered an estimate only; please consult a registered dietician, nutritionist, or your physician for specific health-related questions. Read more here. Please note that the recipe above is published using a recipe card plugin, with preexisting software which can auto-calculate metric measurements, as well as change the number of servings. Metric conversions and changes to the number of servings (resulting in different ingredient amounts) will only appear in the ingredient list, and are not changed within the step-by-step directions of the recipe.
1.1K shares
Trenette al Pesto – Ligurian Pasta PREVIOUS