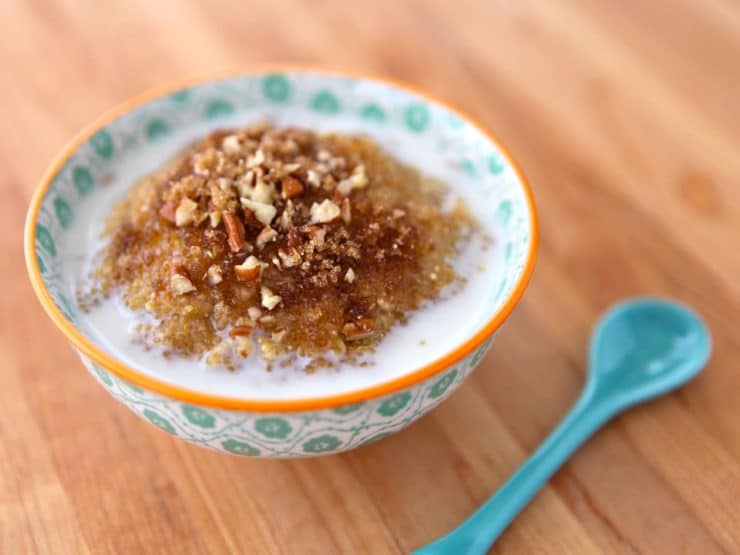 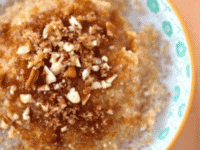 Porridge has been around for thousands of years. Historically a dish enjoyed by the lower classes, porridge is a simple and inexpensive way to create a filling meal from very few ingredients. All porridges consist of grains, pulses, or vegetables cooked into a soft mush. Ancient Romans appreciated porridge because it allowed them to eat cereal grains like wheat without the need for grinding those grains. An early Roman recipe for porridge can be found in De Agricultura, or “On Agriculture,” a treatise on farm management written by by Cato the Elder (234-149 BCE):

Recipe for wheat pap: Pour 1/2 pound of clean wheat into a clean bowl, wash well, remove the husk thoroughly, and clean well. Pour into a pot with pure water and boil. When done, add milk slowly until it makes a thick cream.

During the Tang dynasty, the Northern Chinese survived on porridge made from millet and goat’s milk. In Central Europe during the 1800’s, porridge became popular with early vegetarians looking for nutritious meals without meat. In 17th century Romania, a porridge from cornmeal similar to polenta known as mamaliga became a staple in the Romanian Jewish diet. In the early 1900’s, the labouring classes of England called oat porridge “water pudding” and ate it for both breakfast and dinner. Countless other forms of porridge have surfaced throughout the centuries.

Today, we think of porridge as a hot breakfast dish made from oats, wheat, or ground corn. Modern oatmeal porridge is a descendant of the English dish called pottage, a simple meat stock thickened with oats and sometimes enriched with chunks of meat or vegetables. The Scottish enjoy their porridge oats unsweetened with salt, cream or buttermilk; the English started the tradition of sweetening porridge. Americans tend to like their porridge on the sweeter side.

The most common porridge in America is oatmeal, a family favorite in our home. My stepdaughter likes to eat oatmeal before bedtime, as a sort of late evening snack. She likes it the way her Abba (dad) makes it—sweetened with brown sugar and maple syrup. I developed this Quinoa Porridge with Maple and Brown Sugar as a more nutritious alternative to our usual oatmeal. Quinoa is a natural source of protein. Because it’s a seed and not a grain, it’s also completely gluten free, which is helpful to those who have trouble processing gluten. To make it dairy free/pareve, substitute a non-dairy milk; I’ve provided suggestions below. You can add raisins or fruit to the mix, if you’d like; dried fruits should be added 5 minutes before the end of cooking. Fresh fruit can be stirred in during the last minute of cooking till warmed through, or used as a topping. This is our new favorite porridge here on the homefront… it’s warm, creamy, comforting, and healthy. Enjoy! 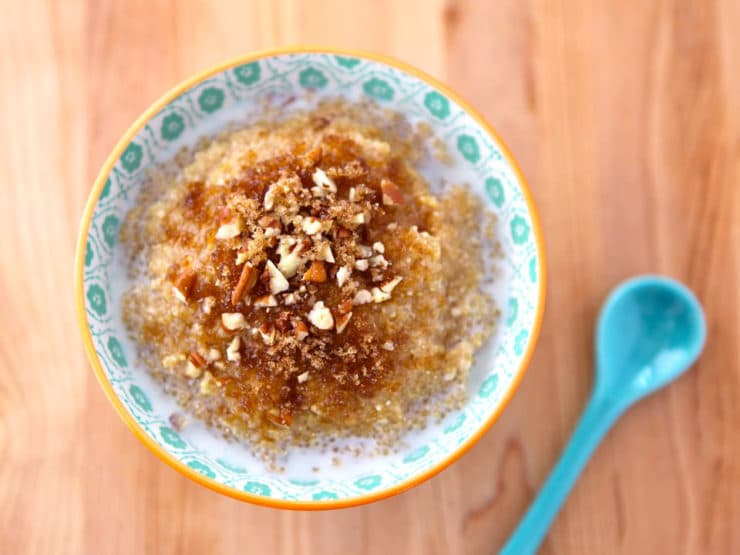 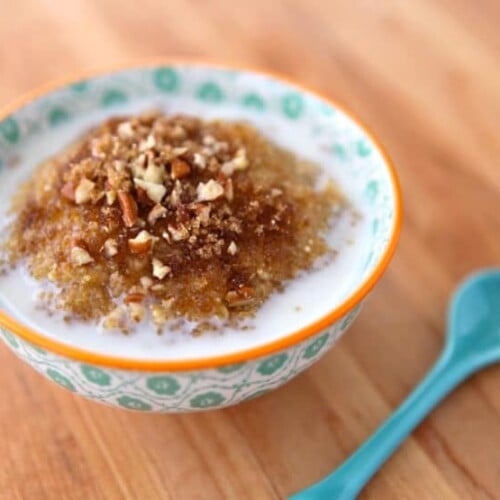 To Make Pareve/Dairy-Free: In the place of regular milk, substitute almond milk, soy milk, or light coconut milk (ex. So Delicious or Silk brands- do not use canned). Heat milk substitute as directed above, heating slowly and stirring constantly to prevent scorching. I have tested the milk substitutes listed in this recipe with good results; I have not tried it with rice milk or any other alternatives.

Nutritional information should be considered an estimate only; please consult a registered dietician, nutritionist, or your physician for specific health-related questions. Read more here. Please note that the recipe above is published using a recipe card plugin, with preexisting software which can auto-calculate metric measurements, as well as change the number of servings. Metric conversions and changes to the number of servings (resulting in different ingredient amounts) will only appear in the ingredient list, and are not changed within the step-by-step directions of the recipe.
1.5K shares
Chocolate Dipped Strawberries PREVIOUS