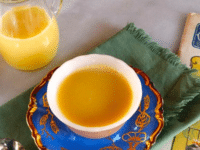 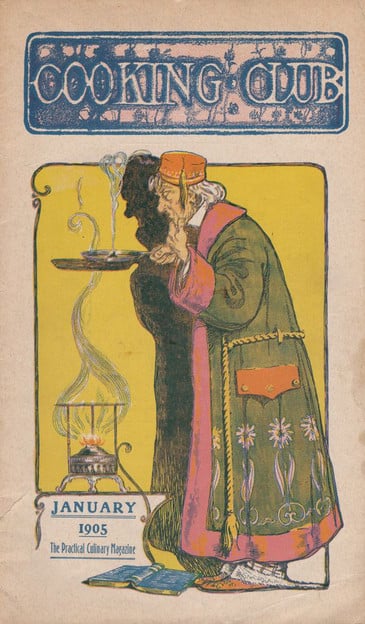 Over the past few years I’ve been collecting a vintage, pamphlet-style magazine called Cooking Club: The Practical Cooking Magazine. Now that I have an issue for each month of the year, I’ve decided to share a monthly Cooking Club recipe with all of you. The pages of Cooking Club are filled with editorials, ads and stories. Most of the content is hilariously out of date; in fact, some of it is downright offensive when taken out of the historical context and social climate of America in 1905. And yet, a few of the editorials are surprisingly ahead of their time. The January 1905 issue is no exception. I’ve included some of my favorite tidbits here.

1905 was the year Albert Einstein worked on developing the theory of relativity, Las Vegas was founded, and German spy and exotic dancer Mata Hari made her big stage debut. It was the second year of the Russo-Japanese War. Several fascinating personalities were born in 1905 including Greta Garbo, Christian Dior and Howard Hughes. What were they all eating? Cooking Club gives us many clues, from recipes to full menus. Each issue includes menu suggestions for the month, including dishes for breakfast, lunch and dinner. Here are the suggestions for January 1905. I love scanning through to see what people were eating at the time. Popcorn with cream, hot clam cocktails, jelly fritters and brick ice cream all make an appearance here. 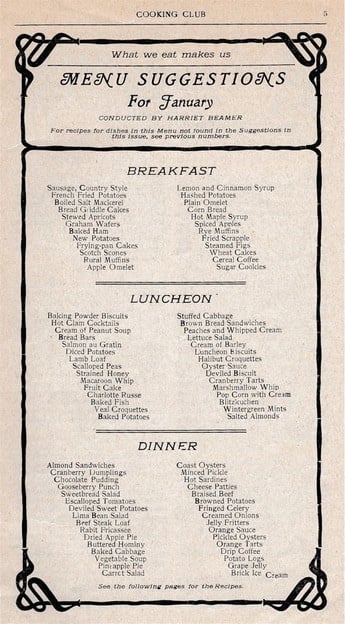 One column in the magazine that surprised me with its foresight is titled, “Hygienic Value of Olive Oil.” The piece urges that “people should buy it in half gallon cans and make a business of using it internally and externally.” Over a century later we are still praising the benefits of olive oil in cooking and skincare, so Cooking Club was definitely onto something. I also found a section on “coreless apples” quite interesting. The hybrid variety of apple is described as “the world’s greatest discovery in horticulture and the wonder of the age.” The apples are red with yellow dots and, like oranges, have a hard navel at the bottom. I’m not sure what happened to these coreless apples or why they didn’t catch on, but they certainly would make prepping for apple pies an easier task. 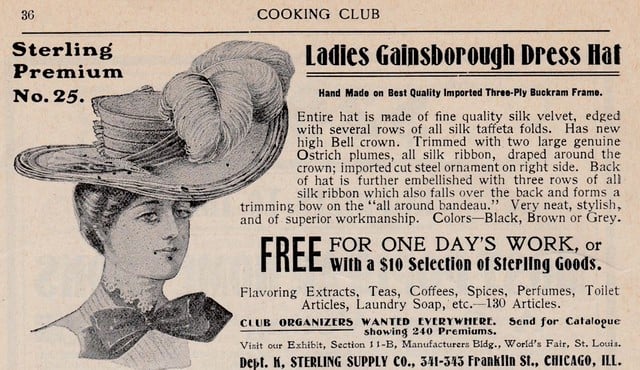 Don’t you just love this ad? Hats were very fashionable during the early 1900s and ladies were offered this Gainsborough Dress Hat in exchange for “one day’s work.”  The hat is “made of fine quality silk velvet, edged with several rows of all silk taffeta folds. Has new high Bell crown; imported cut steel ornament on the right side. Back of hat is further embellished with three rows of all silk ribbon which also falls over the back and forms a trimming bow on the ‘all around bandeau.’ Very neat, stylish and of superior workmanship.” It was available in brown, grey or black. Sounds pretty fancy, no? And possibly a bit heavy.

There is an eclectic mix of content in the magazine; corners and ends of columns are filled with stories, jokes, and rhymes. I have to admit this little rhyme made me giggle and cringe at the same time. Vegetarians will not be amused: 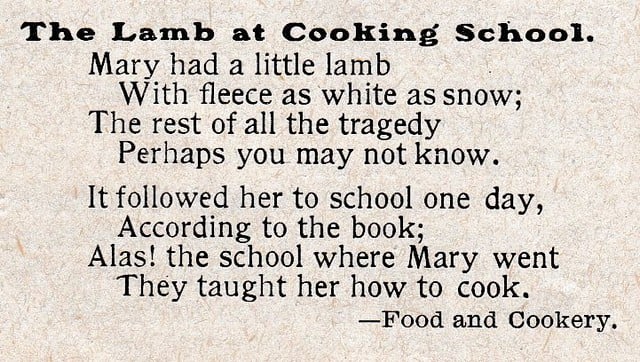 There were many interesting recipes in this month’s issue. I ultimately settled on maple custards; it seemed like a nice flavor for the season, and I’d never tried a custard flavored with maple syrup. I first followed the original recipe as written. As is often the case with historical recipes, the results were mixed. While the concept was good, the custard was too eggy and lacked in maple flavor, sweetness and complexity. It also called for an orange custard sauce but did not specify a recipe. Here is the original recipe: 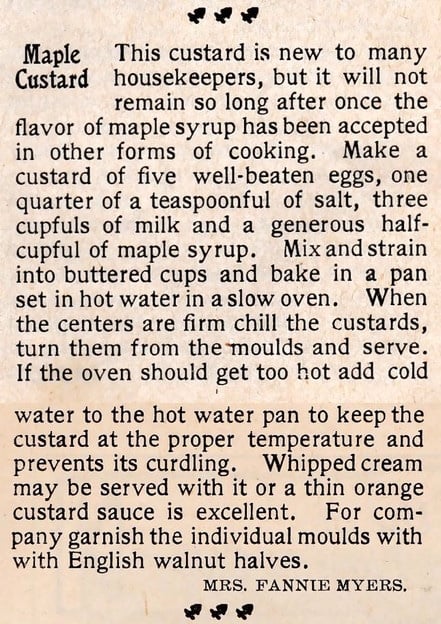 I liked the basic flavor profile here, so I made a few adjustments. I scalded the milk and tempered the eggs to prevent curdling and enhance that rich, creamy custard texture. I also increased the maple syrup and added a bit of sugar to the mix. The resulting custard was really delightful– sweet and layered with a delightful hint of maple flavor. 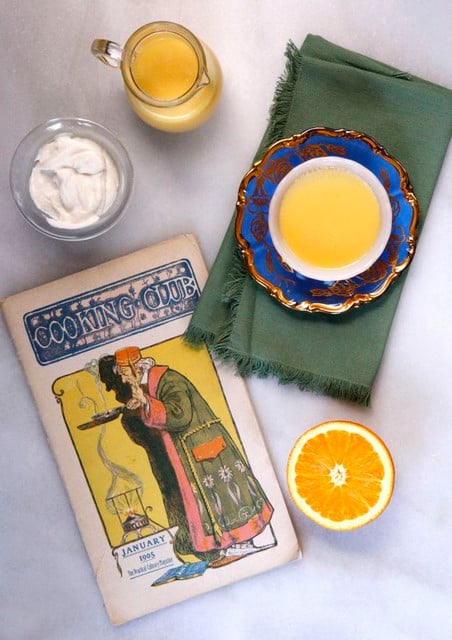 Cooking Club suggests serving the custards with whipped cream and a thin orange sauce. This issue didn’t include a recipe for the sauce, but I was able to adapt a simple pudding sauce recipe from another issue (Cooking Club, February 1913) that worked nicely; I simply substituted orange juice for water and added a bit of vanilla. The combination of maple and orange flavors was just lovely. I didn’t add an “English walnut” but it wouldn’t be out of place here. The recipe suggests unmolding the custards from their cups. I was able to do that with a bit of maneuvering, though I don’t think it’s necessary, as this dessert can be enjoyed right out of the cup. I used antique coral-colored custard cups that were passed down from my grandmother, but any custard cup will do. I hope you have a chance to make this custard, it’s a simple dessert and well worth the effort.

Do you collect old cookbooks or cooking magazines? What titles do you have in your collection? 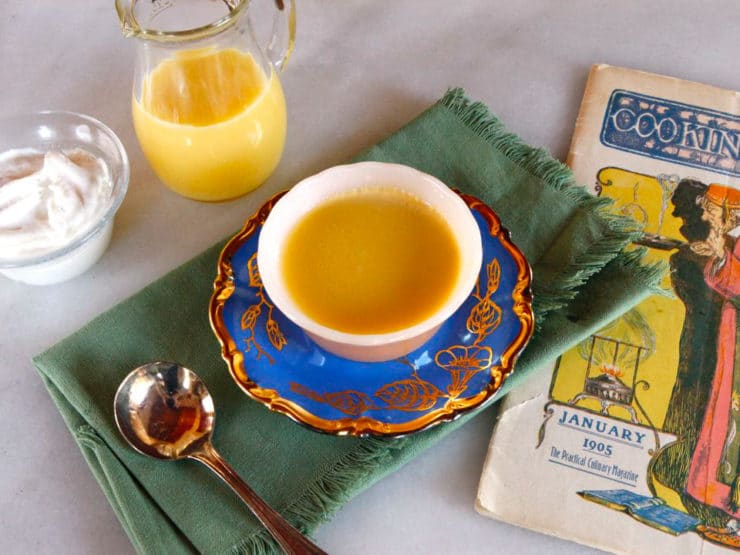 Nutrition Facts
Maple Custard with Orange Sauce
Amount Per Serving
Calories 485 Calories from Fat 243
% Daily Value*
Fat 27g42%
Saturated Fat 16g100%
Cholesterol 193mg64%
Sodium 235mg10%
Potassium 249mg7%
Carbohydrates 55g18%
Sugar 49g54%
Protein 5g10%
Vitamin A 1110IU22%
Vitamin C 16mg19%
Calcium 140mg14%
Iron 0.6mg3%
* Percent Daily Values are based on a 2000 calorie diet.
Tried this recipe?Let Us Know How It Was In The Comments.
4.7 from 3 votes
Nutritional information should be considered an estimate only; please consult a registered dietician, nutritionist, or your physician for specific health-related questions. Read more here. Please note that the recipe above is published using a recipe card plugin, with preexisting software which can auto-calculate metric measurements, as well as change the number of servings. Metric conversions and changes to the number of servings (resulting in different ingredient amounts) will only appear in the ingredient list, and are not changed within the step-by-step directions of the recipe.