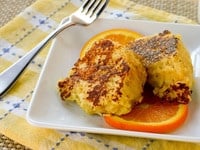 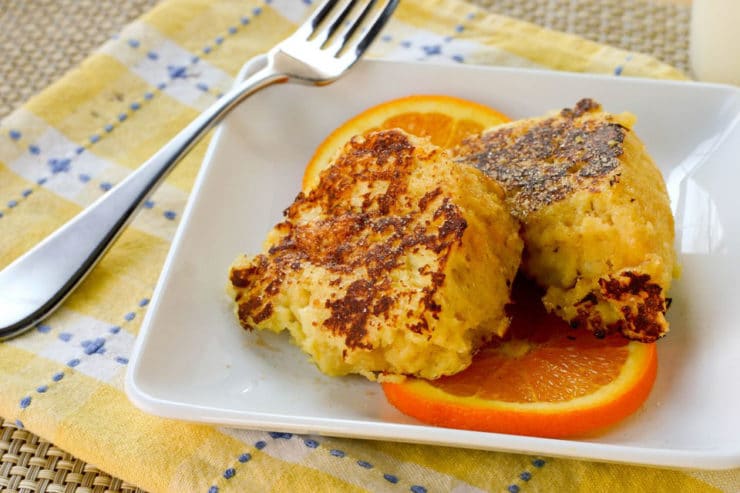 I adore Kristy’s blog, Eat, Play, Love. When the idea of the Passover Potluck started to blossom, I knew I had to include her. Kristy teaches her kids through food, exploring geography and different cultures by cooking dishes from around the world. I thought that her kids would have fun exploring Jewish culture by creating a new Passover recipe. She came back with something really delicious and creative, and I am thrilled to share the recipe (and her adorable blog) with you!  ~ Tori

Chag Pesach Sameach. This is Kristy, Mike, Mr. N (7-1/2 years old) and Miss A (3-1/2 years old) and we blog our family food adventures over at Eat, Play, Love. We were so excited when Tori asked us to be a part of the Passover Potluck. We’ve never before cooked a Kosher meal, but it fits in perfectly with the mission of our blog which we started in January of 2011.

Our goal is to explore different cultures around the world with our children by cooking traditional recipes from different countries every few weeks. It’s our way of opening them up to the many different cultures, religions, and ethnicities around the globe while also expanding their palates. The kids participate in the country selection as well as the cooking which is always an adventure; and as an added bonus, we’ve also found it’s been a great way for us all to learn how to really cook!

In addition to our international cooking adventures, we also explore stateside cuisine, usually picking one state each week from which to sample a traditional dish as well as endeavor on a “quest for the best” of one particular recipe. Last year we searched for our family’s favorite banana bread, making 13 different recipes, freezing a slice from each batch and then having the ultimate banana bread show down this past month. This year we’re on to our next adventure, the quest for the best French toast, which we’ll break down NCAA March Madness style early next year. And that brings us to our recipe for today – Passover French Toast Breakfast (printable recipe appears at the end of this post).

Now you could go the easy route and purchase a Passover sponge cake (and we totally wouldn’t blame you), but we try and keep things as authentic as possible with the kids, so we first started by making a Passover Citrus Sponge Cake. Incidentally, this happens to be the first cake we’ve ever baked from scratch (in other words, not out of a box!). We should note here that it’s best to make the cake a day or two ahead of when you plan to make the French toast. We made ours the day before and started by separating 12 eggs and whisking together the egg yolks. 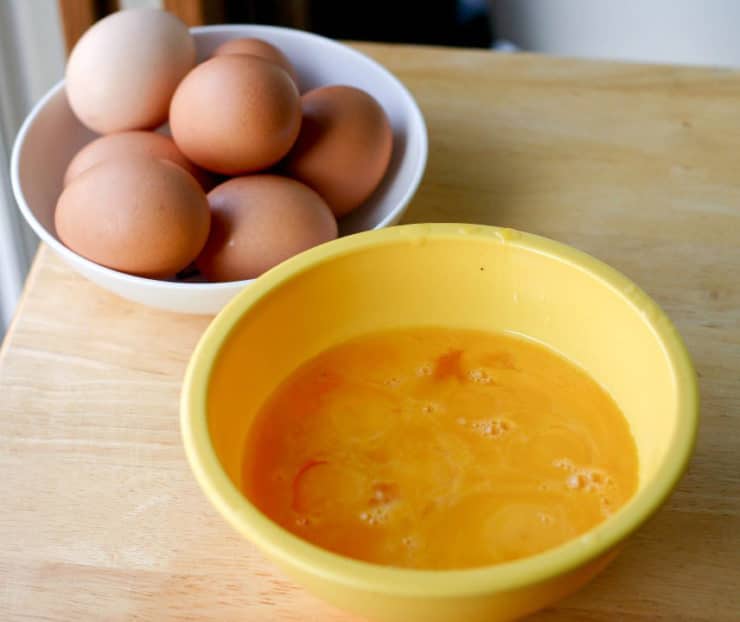 We then whisked in 1-1/2 cups of white sugar, the zest from one orange and one lemon and a half cup of freshly squeezed orange juice. 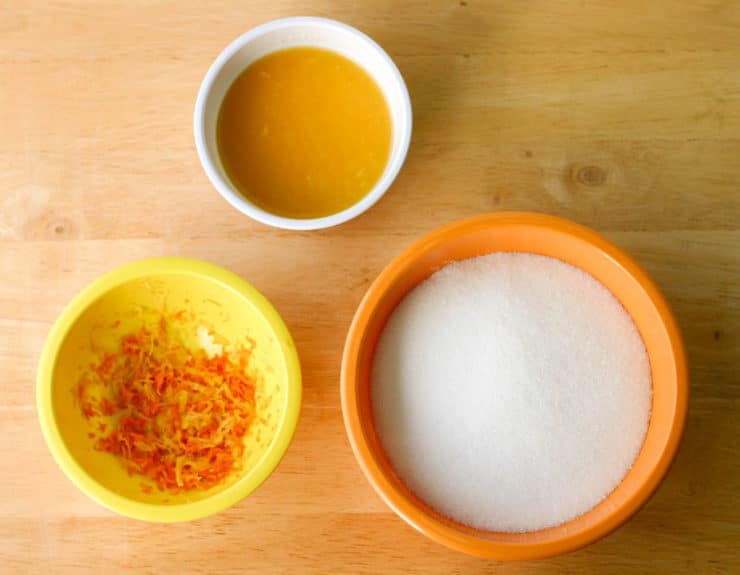 Next we sifted together the cake meal and potato starch – both Kosher and approved for Passover. 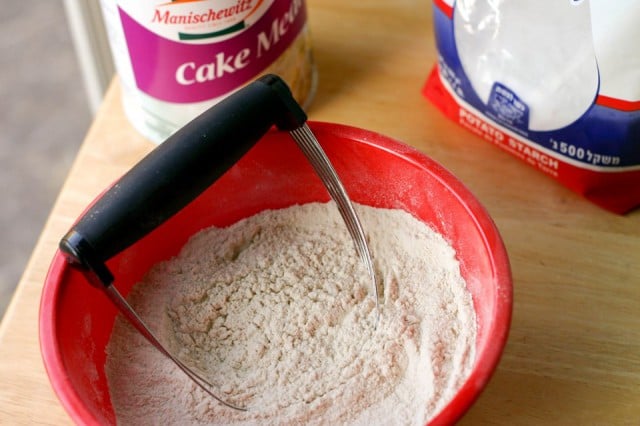 This was then stirred into the egg yolks until fully incorporated. 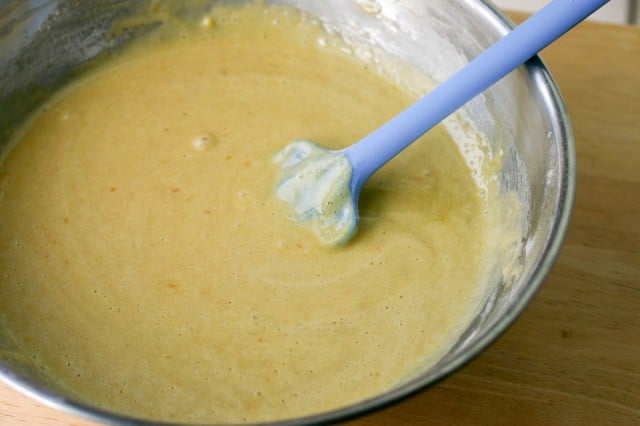 We then turned our attention to the egg whites which we whipped until they were stiff and shiny using an electric mixer on high speed. 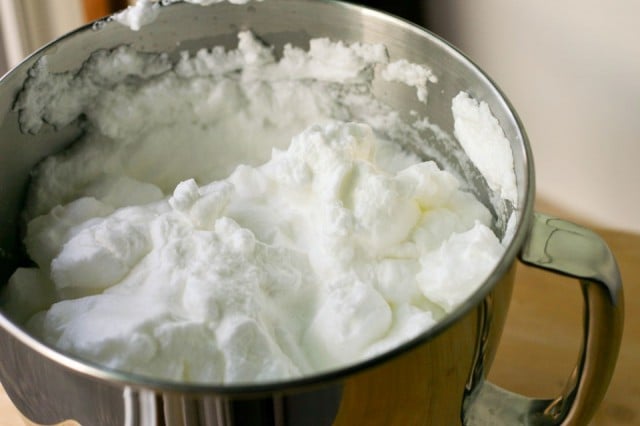 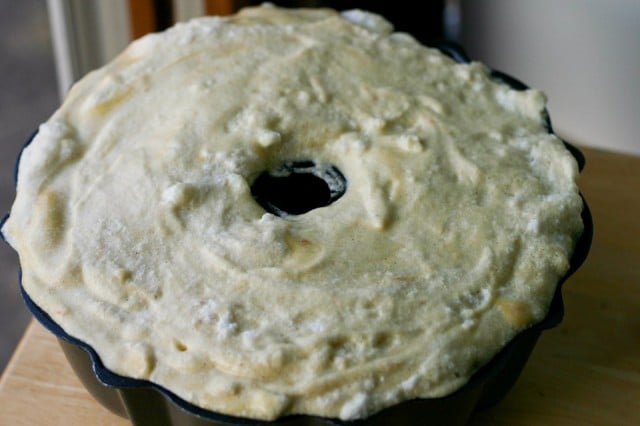 We baked the cake for just over an hour at 325F at which point the batter had set and a toothpick once inserted, came out clean. We then removed the cake from the oven, inverted it onto a plate and let it rest in the cake pan until it was completely cooled. 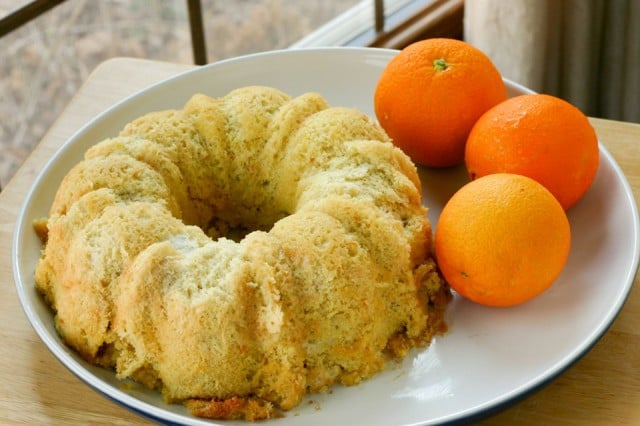 Now obviously, you’ll want to do a better job greasing the cake pan than we did, but we weren’t too concerned since this is going to be made into French toast. We covered our cake and left it until the next morning when we cut it into about one-inch slices for the French toast. 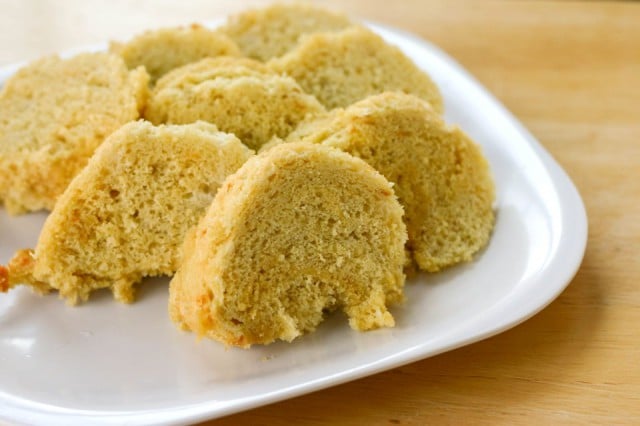 Miss A took care of whisking together two eggs for us. 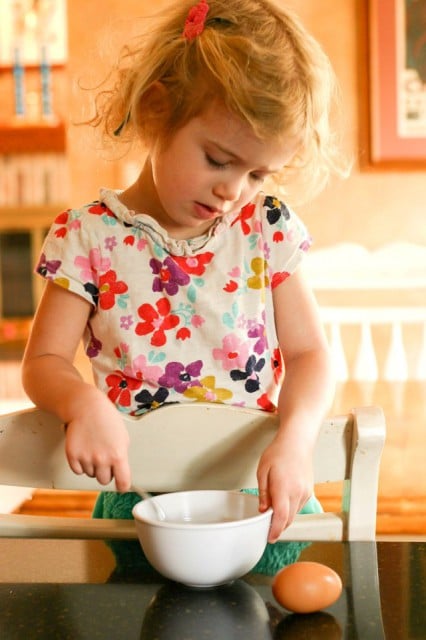 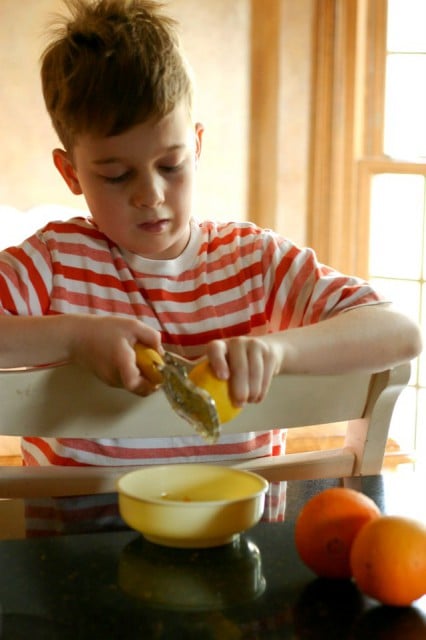 …which we then combined with milk to make our dipping batter. 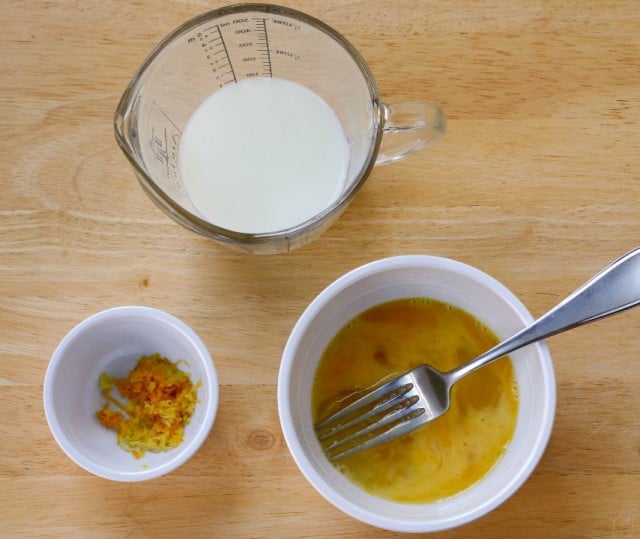 Next we heated a large skillet over medium-high heat and added a bit of butter to grease the pan. We then carefully dipped and soaked each slice of the Passover Citrus Sponge Cake in the batter and added it to the hot skillet. 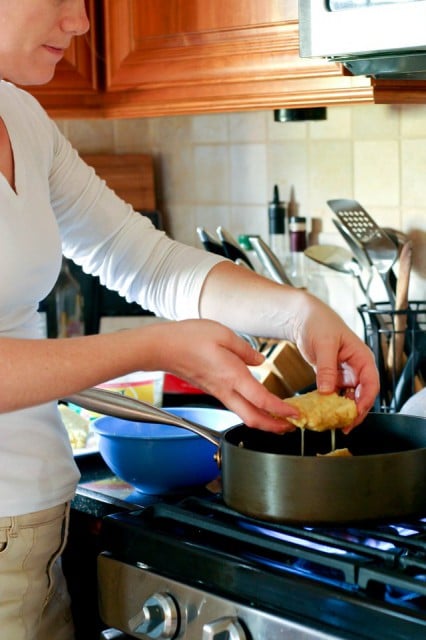 We cooked the slices about 3 to 4 minutes on the first side before flipping and cooking them an additional 2 to 3 minutes on the other side. The result was a beautiful golden brown crust. 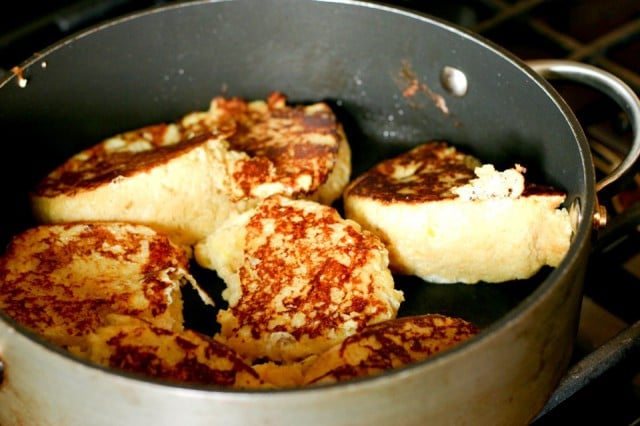 Before serving our Passover French toast, Miss A and Mike sliced up some fresh oranges to use as a garnish. 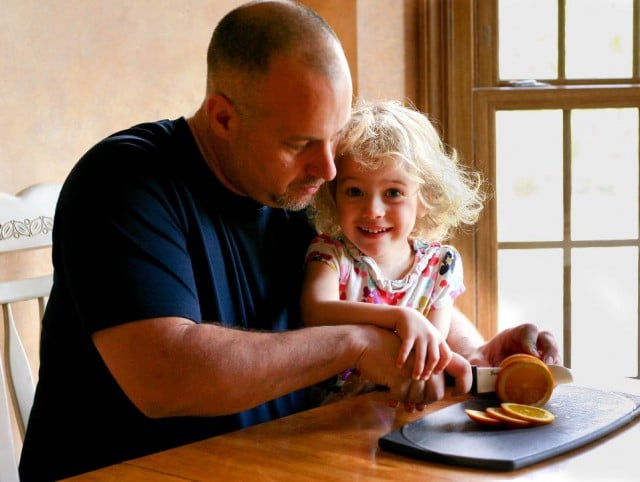 And Mr. N mixed together some cinnamon and sugar… 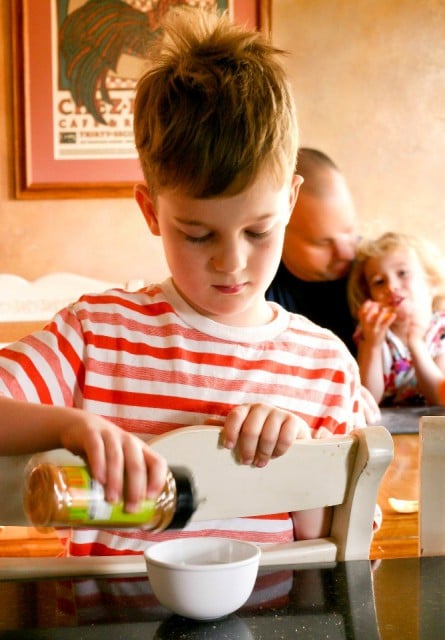 …which Miss A and I then sprinkled over the toast. 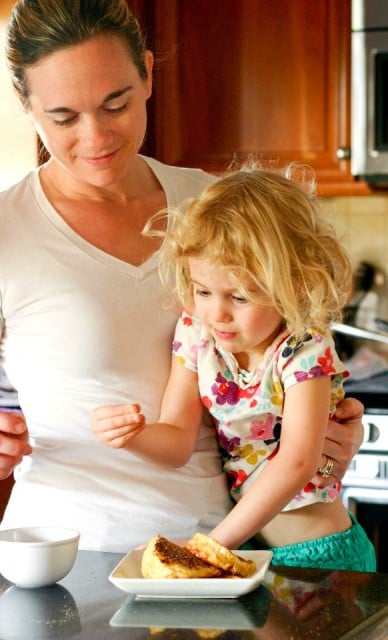 Now having already snuck a few pinches of the sponge cake, we were quite eager to dig into our French toast – especially the kids who were thrilled to be eating cake for breakfast. 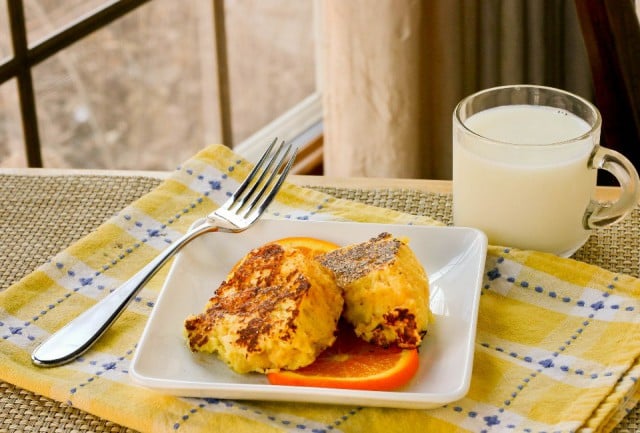 Fortunately, it didn’t disappoint. The Passover French Toast was absolutely delicious. The outside was crispy and full of that traditional French toast flavor, while the inside was soft, fluffy and totally cake-like with a wonderful fresh burst of citrus.

Mike and I even ate the French toast without syrup or jellies – it was definitely flavorful enough on its own. He and I easily gave this Passover breakfast 4 spoons (our highest rating) and are already suspecting that this recipe has a shot at making the Final Four next year.

Mr. N also gave the dessert – err I mean breakfast – 4 spoons. I think given the chance he would have eaten half the cake this way. As for Miss A, she was our lone dissenter. She liked the inside of the toast (the cake portion), but didn’t really like the French toast exterior. I’m not sure if it was the flavor or the color that deterred her, so she came in with 2 spoons (meaning it was ok, but she doesn’t need to eat it again). 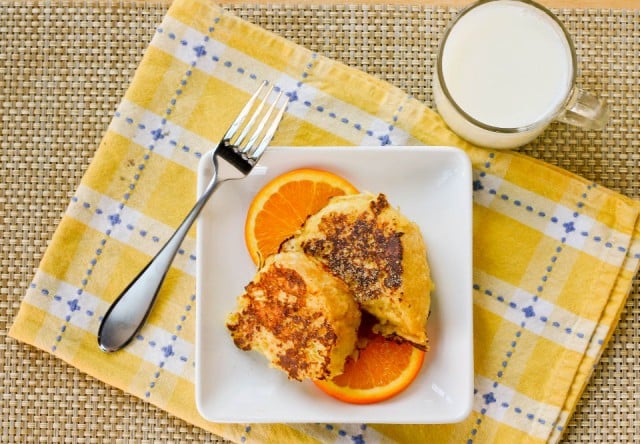 Still we’re considering this one a win. You never know with Miss A. Tomorrow morning she may love this.

So there you have it – our first Kosher meal – and a good one at that! Many thanks to Tori for organizing this wonderful event, and for asking us to join the adventure. We had a wonderful time and learned a great deal. It prompted several discussions on religion, chemistry (leavening agents) and the difference between Kosher and Kosher for Passover with the kids – and really that’s what this is all about for us. We hope you’ll try our Passover French Toast Breakfast, and if you do, we hope you enjoy it as much as we did. Cheers and Happy Passover! 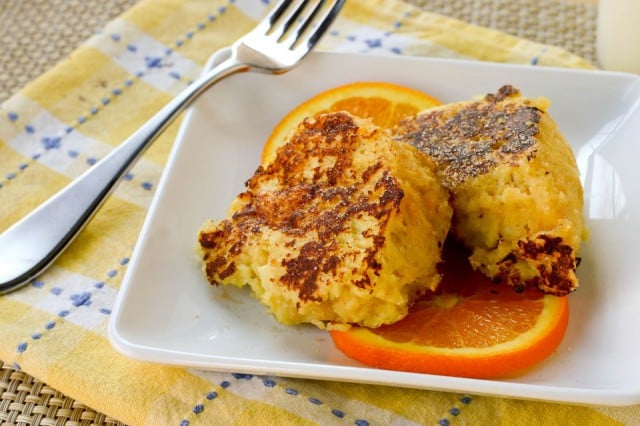 Nutrition information is for cake slices.

Nutrition Facts
Passover French Toast
Amount Per Serving
Calories 197 Calories from Fat 36
% Daily Value*
Fat 4g6%
Saturated Fat 1g6%
Cholesterol 159mg53%
Sodium 145mg6%
Potassium 116mg3%
Carbohydrates 33g11%
Sugar 22g24%
Protein 6g12%
Vitamin A 250IU5%
Vitamin C 4.5mg5%
Calcium 28mg3%
Iron 1.1mg6%
* Percent Daily Values are based on a 2000 calorie diet.
Nutritional information should be considered an estimate only; please consult a registered dietician, nutritionist, or your physician for specific health-related questions. Read more here. Please note that the recipe above is published using a recipe card plugin, with preexisting software which can auto-calculate metric measurements, as well as change the number of servings. Metric conversions and changes to the number of servings (resulting in different ingredient amounts) will only appear in the ingredient list, and are not changed within the step-by-step directions of the recipe.
362shares

Brenda Ponnay, author of the Secret Agent Josephine blog, is a regular contributor to ToriAvey.com. Her craft blogs are kid and family friendly; each project END_OF_DOCUMENT_TOKEN_TO_BE_REPLACED