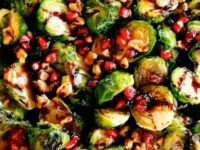 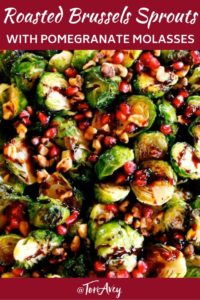 In this recipe for Roasted Brussels Sprouts with Pomegranate Molasses, tender roasted sprouts are topped with sweet, rich homemade pomegranate molasses, toasted walnuts and fresh pomegranate arils. This beautiful dish is filled with texture and flavor, a delightful side for a holiday gathering. 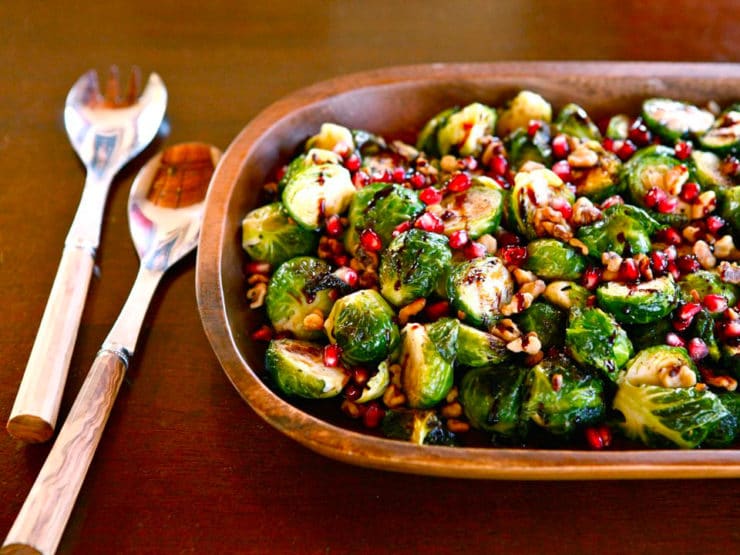 There may be no vegetable that is as polarizing as Brussels sprouts. Those who like them love them, while those who don’t seem to loathe the very thought of them. I never really understood the aversion to Brussels sprouts. I often wonder if the loathing stems from never having them well cooked. Steamed and boiled Brussels sprouts are pretty boring, I’ll give you that. Roasting, however, brings out a magical flavor from these little veggie treasures. Roast them with olive oil, salt and pepper, then drizzle them with a scrumptious sauce. Like magic, Brussels sprouts go from boring veggie to crave-worthy side dish.

Brussels sprouts are actually a variety of the common cabbage, with several miniature cabbage-like heads growing around a stem. They are known by a variety of names, including “nobby greens,” “bonsai cabbages,” or simply “sprouts.” Though an early ancestor of Brussels sprouts may have been culivated in ancient Rome (there is some debate on this), Brussels sprouts as we know them today first gained popularity in Belgium and are named for– you guessed it– the city of Brussels! They were grown in English and French gardens at the end of the 18th century, and we can credit American Founding Father Thomas Jefferson with planting them in his Monticello garden in 1812. Over time, their popularity spread throughout the United States.

Here I’ve roasted a batch of Brussels sprouts, then drizzled them with my homemade pomegranate molasses. I highly recommend using my molasses recipe, as it is sweeter and richer than the average bottled pomegranate molasses. It’s super easy to make, and can be made a few days ahead to save on time. Scatter these Brussels sprouts artfully on a platter and serve them at your next soiree. I ate a full plateful of them a few nights ago, just after I snapped these pics (which might explain why I didn’t take the time to properly light them… I was hungry!). It was both my lunch and dinner, and I was a happy camper. The crispy yet tender roasted Brussels sprouts were perfectly dressed by the sweet tartness of pomegranate molasses. I especially loved the crunchy toasted walnuts and those little bursts of sweetness from the pomegranate seeds. I can’t imagine a more easy or elegant side dish for your holiday table.

So what about you? What do you think of Brussels sprouts… love ’em or hate ’em? 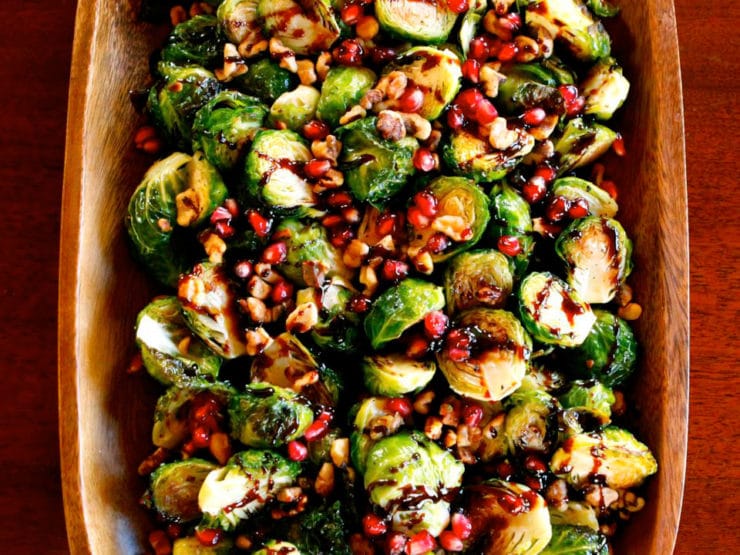 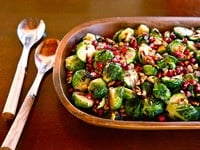 Cholent – A savory slow-cooked stew for Shabbat with meat, potatoes and beans. Also known as Chamin, Dafina, and Skhina.