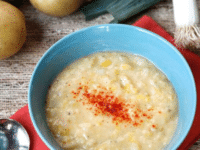 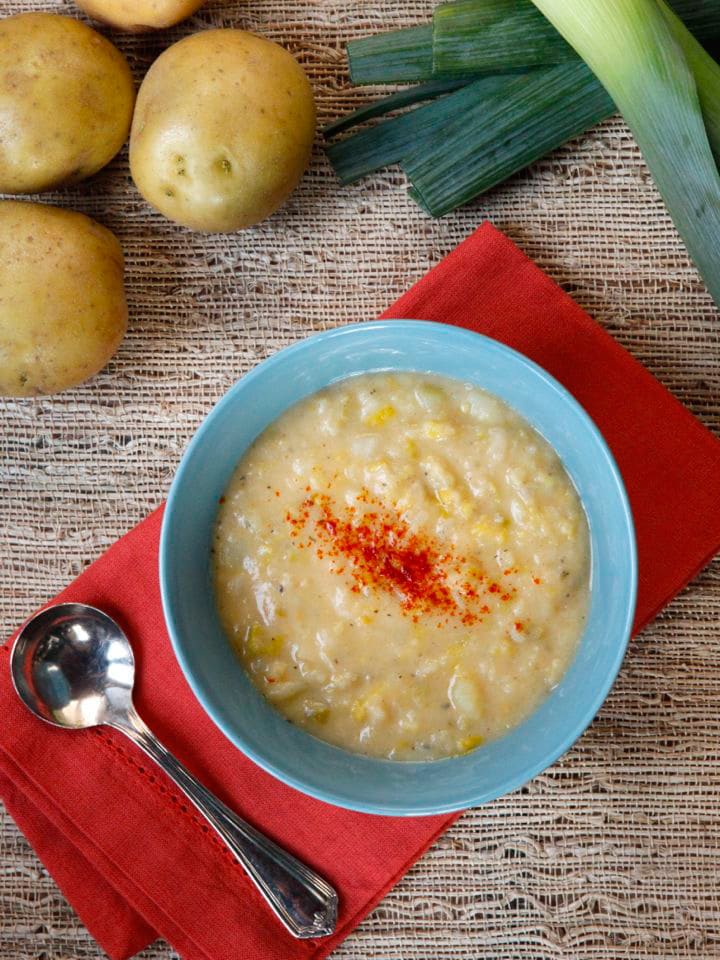 Chilled potato leek soup is known as vichyssoise. According to one folk tale, King Louis XV of France’s paranoia is responsible for the soup being served cold. As a way of testing his favorite soup for traces of poison, it was tasted by several servants before he would eat it. By the time the soup was deemed safe to eat, it was no longer hot and King Louis decided he liked it better this way. Though this story is amusing, it is more likely that Chef Louis Diat created vichyssoise while working at New York’s Ritz Carlton between 1910 and 1920. The chef was often challenged to find a cool dish to serve on the Ritz’s rooftop garden during the hot summer months. As a young boy in France, Chef Diat ate his mother’s hot leek and potato soup and would cool it down by adding milk. This inspired him to create a chilled version he called “creme vichyssoise” after a spa located near his hometown. Though he originally planned to only serve the soup during the summer, it was so popular that he put it on the menu full time.

Of course, hot potato leek soup goes back further than Chef Diat; after all, he was eating his mother’s recipe as a child. Recipe variations appear in Escoffier’s Guide Culinaire (1903) and the Royal Cookery Book by Jules Gouffe (1869). Escoffier adds cream, while Gouffe thickens his with bread and butter. Even further back, a related dish called Cawl Kenin (or Cawl Cennin) bears similarities to modern potato leek soup. This Welsh stew with potatoes, leeks, meat and broth dates back to the 14th century. Considered by many to be the national dish of Wales, Cawl Kenin is often thickened with oats or flour and flavored with salted bacon.

The recipe that appears below is my take on potato leek soup, served piping hot with smoky undertones from a generous sprinkling of smoked paprika. It’s such a comforting meal on a chilly evening. Many potato leek soups are made with cream, but here I’ve used milk to cut on calories a bit. If you’re craving a really decadent soup feel free to substitute 1 cup of cream for 1 cup of the milk. Personally I find it plenty rich and satisfying with milk. If you’re feeling inspired by Chef Louis Diat you can add more milk to chill it, however I wholeheartedly recommend serving it hot.

Wondering how to clean and prep those funny-looking leeks? I’ve provided a full tutorial here. 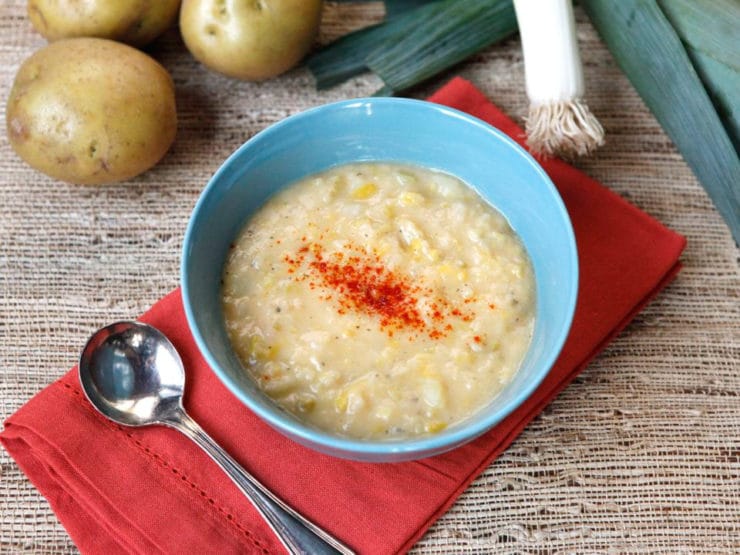 Nutrition Facts
Smoky Potato Leek Soup
Amount Per Serving
Calories 168 Calories from Fat 36
% Daily Value*
Fat 4g6%
Saturated Fat 2g13%
Cholesterol 12mg4%
Sodium 729mg32%
Potassium 705mg20%
Carbohydrates 27g9%
Fiber 4g17%
Sugar 4g4%
Protein 5g10%
Vitamin A 1030IU21%
Vitamin C 20.1mg24%
Calcium 114mg11%
Iron 5.3mg29%
* Percent Daily Values are based on a 2000 calorie diet.
Tried this recipe?Let Us Know How It Was In The Comments.
4.5 from 4 votes
Nutritional information should be considered an estimate only; please consult a registered dietician, nutritionist, or your physician for specific health-related questions. Read more here. Please note that the recipe above is published using a recipe card plugin, with preexisting software which can auto-calculate metric measurements, as well as change the number of servings. Metric conversions and changes to the number of servings (resulting in different ingredient amounts) will only appear in the ingredient list, and are not changed within the step-by-step directions of the recipe.
421 shares