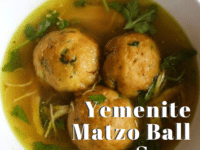 There is something so healing about a bowl of Yemenite soup. The aromatic chicken broth is liberally spiced then slowly simmered, resulting in a stock that is simultaneously complex and comforting. The star of this miracle soup is turmeric, an anti-inflammatory spice that gives the soup a rich beautiful golden hue. For Passover I thought it would be fun to create a fusion dish, combining my traditional Yemenite soup recipe with fluffy spiced matzo balls. The result is this Yemenite-Style Matzo Ball Soup, and it’s spectacular. 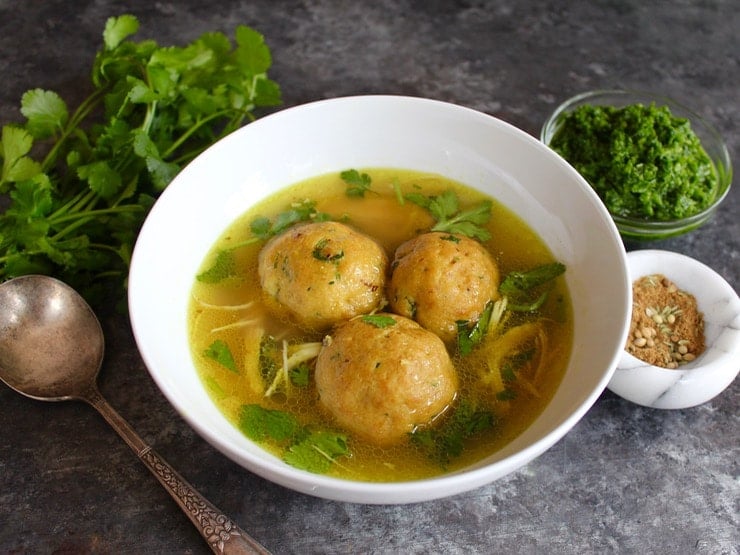 It’s almost like matzo balls were made for Yemenite soup. Matzo balls are Eastern European in origin; these soft, fluffy Ashkenazi dumplings are obligatory at our Seder feast each year. Classic Yemenite soup generally features potatoes as the starch of choice, but here I have replaced them with matzo balls for Passover. While my family loves my classic matzo ball soup, they all agree that the medley of Yemenite spices brings it to another level. Add a touch of schug and you’ve got something really unique. The combination may not be traditional, but it’s certainly tasty!

According to archaeological evidence, Jews have inhabited Yemen since at least the 3rd century CE. The history of the Yemenite Jewish people distinguishes them from all other Jewish communities. Yemenite Jewish tradition has remained largely unchanged throughout the centuries due to the community’s relative isolation and remote location. They have preserved many ancient religious customs that might otherwise have been lost to the passage of time. In fact, some researchers believe that the Yemenite Hebrew dialect is more closely related to Biblical Hebrew than any other dialect.

While developing this recipe I made some adjustments to my basic Yemenite soup, ensuring that all spices used here were kosher for Ashkenazi Passover. I also recently updated my schug recipe to include a Passover-friendly spice option. Click here for the recipe. It’s a spicy, herby, garlicky accompaniment to this rich and delicious soup. A little goes a long way– just add a small spoonful for an even more amazing flavor. 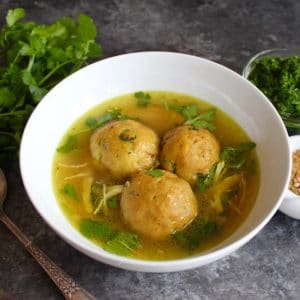 You will also need: 2 stock pots, 8 quarts each - one must have a lid; coffee or spice grinder; kitchen twine; mesh strainer; large bowl; small bowl. If making for Passover: This recipe is kosher for Sephardic Passover. It contains some spices that might not be acceptable for those following Ashkenazi traditions. Please note that some families do not use baking powder during Passover. Baking powder is mineral based, not grain based, and therefore it does not fall under the banner of “chametz,” the group of foods that are banned for Passover. There are, in fact, several brands of kosher for Passover baking powder (like this one). However, if you would like an alternate method for producing fluffy, light matzo balls without baking powder, check out this recipe (see method #2). For those who do not like cilantro, fresh parsley or dill may be substituted.

Nutrition Facts
Yemenite-Style Matzo Ball Soup
Amount Per Serving
Calories 524 Calories from Fat 333
% Daily Value*
Fat 37g57%
Saturated Fat 7g44%
Cholesterol 179mg60%
Sodium 267mg12%
Potassium 450mg13%
Carbohydrates 20g7%
Fiber 1g4%
Sugar 1g1%
Protein 26g52%
Vitamin A 405IU8%
Vitamin C 5mg6%
Calcium 115mg12%
Iron 4mg22%
* Percent Daily Values are based on a 2000 calorie diet.
Tried this recipe?Let Us Know How It Was In The Comments.
4.8 from 4 votes
Nutritional information should be considered an estimate only; please consult a registered dietician, nutritionist, or your physician for specific health-related questions. Read more here. Please note that the recipe above is published using a recipe card plugin, with preexisting software which can auto-calculate metric measurements, as well as change the number of servings. Metric conversions and changes to the number of servings (resulting in different ingredient amounts) will only appear in the ingredient list, and are not changed within the step-by-step directions of the recipe.
2461 shares