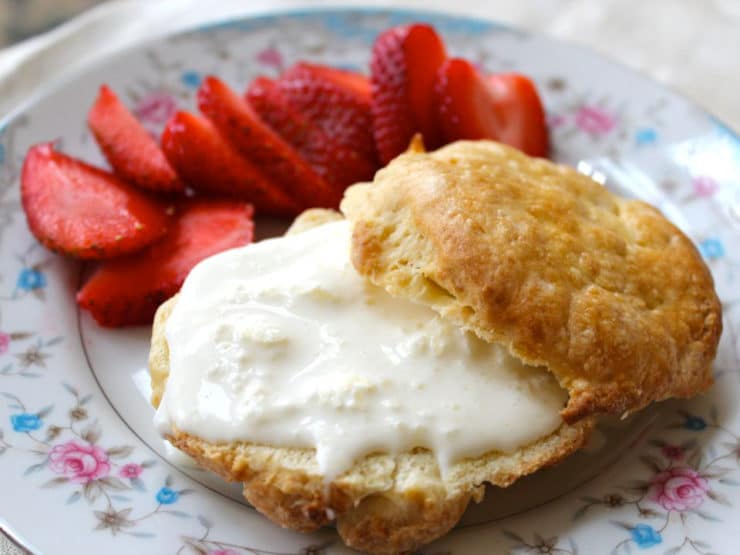 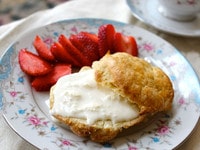 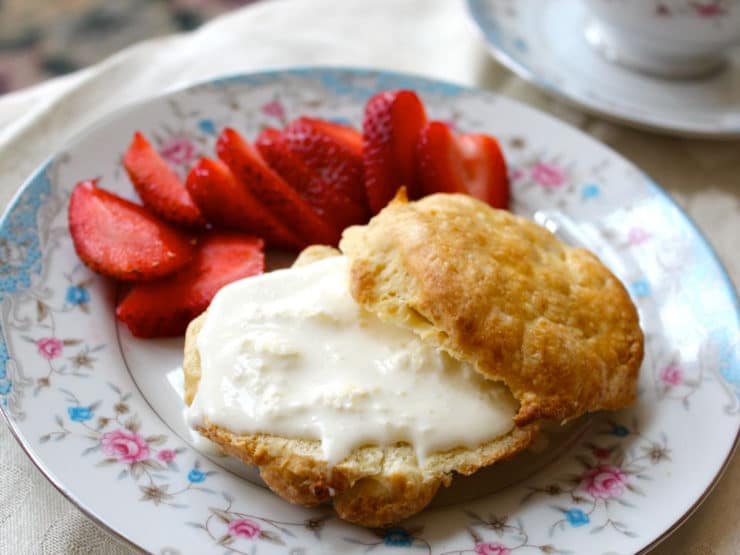 I have, and always have been, a voracious reader of English novels, and I’d often come upon references to “a cream tea.” This, I believed, was tea with cream in it until I reached the part where the characters tucked into scones and clotted cream. When I first traveled to England I had clotted cream myself, in a little teashop in Devon.  It’s what heaven would taste like should heaven have a taste, I thought. And, as is my usual process, I then wondered how such a thing was made.

To American ears, clotted sounds like something’s gone wrong.  To us, clotted refers to a bodily healing process, so it’s hard to make the leap to something tasty.  But in England, clotted simply describes the look of the cream as it clings together.  Once you bite into a golden scone spread thickly with this unctuous concoction, dotted with fresh sliced strawberries, you won’t care what it’s called because it is simply delicious. Clotted cream is also called Cornish cream and Devonshire cream (a nod to its geographical origins). Each area will claim that their clotted cream tastes different from any other. Devon’s cream’s flavor supposedly arises from the peat fires it is cooked over. I have to assume this is the way it once tasted historically, because in the UK today burning peat is frowned upon. Cornwall’s cream is said to have a coarser texture. Incidentally, Cornish Cream was awarded the EU’s Protected Designation of Origin status in 1998. In the past, clotted cream was also called clowtyd, clouted, clowted, and clawted. 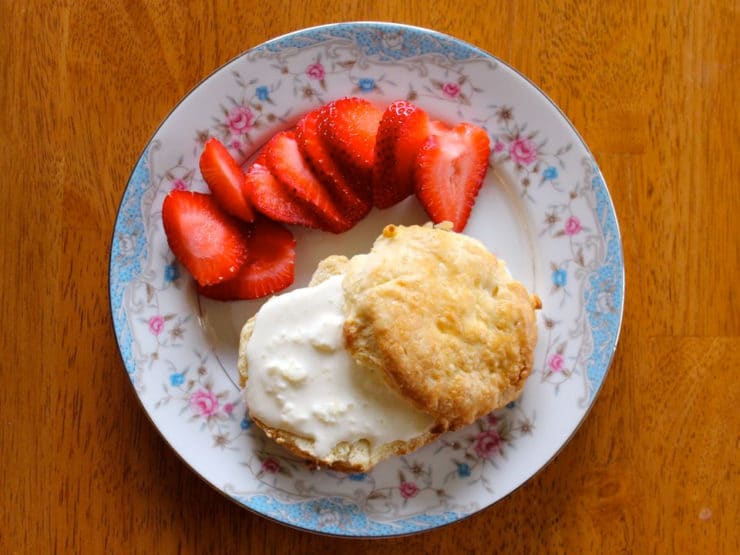 In Devon, the clouting of cream goes back to the Tavistock Abbey estates in the early part of the fourteenth century. Because they had no churns to make butter, they scalded their milk. The resulting clotted cream was stirred and then made into butter. During the sixteenth and seventeenth centuries in Cornwall, clotted cream and butter became the best ways to preserve milk. Later, in British dairies, farmers’ wives would set out a bowl of cream to “settle” for several hours. They would then scald it and let it simmer overnight on their kitchen ranges. As it cooled the next day, the thick, yellow cream was skimmed off and layered into a bowl. Countries other than England also enjoy clotted cream. In Serbia it’s called kajmak, in Turkey it’s kaymak, and in India it’s malai. Clotted cream is often described as having a nutty flavor, which is achieved by cooking the cream without boiling it

Here is a recipe from Cornish Recipes Ancient & Modern by Edith Martin, published by the Women’s Institute in 1929:

Use new milk and strain at once, as soon as milked, into shallow pans. Allow it to stand for 24 hours in winter and 12 hours in summer. Then put the pan on the stove, or better still into a steamer containing water, and let it slowly heat until the cream begins to show a raised ring round the edge. When sufficiently cooked, place in a cool dairy and leave for 12 or 24 hours. Great care must be taken in moving the pans so that the cream is not broken, both in putting on the fire and taking off.  When required skim off the cream in layers into a glass dish for the table, taking care to have a good “crust” on the top.

Here’s a simpler recipe, along with a recipe for a traditional English scone. Top a freshly baked scone with clotted cream and berries, and prepare to swoon!

Note from Tori: These are amazing for breakfast with homemade scrambled eggs on the side! 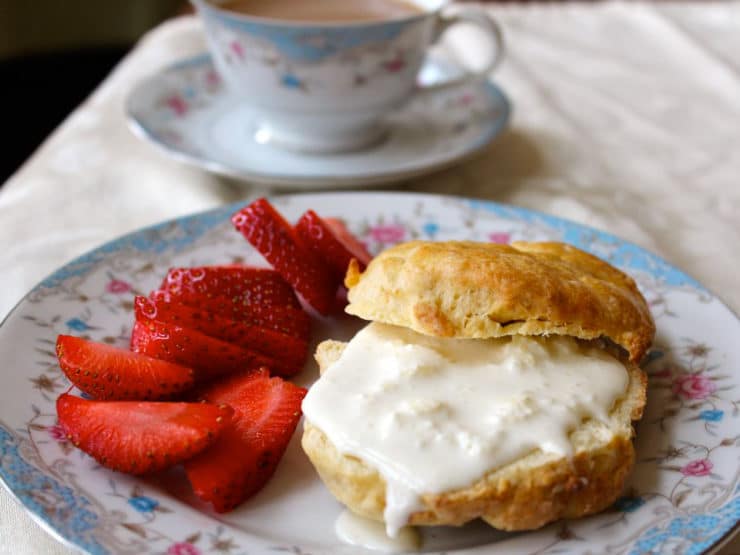 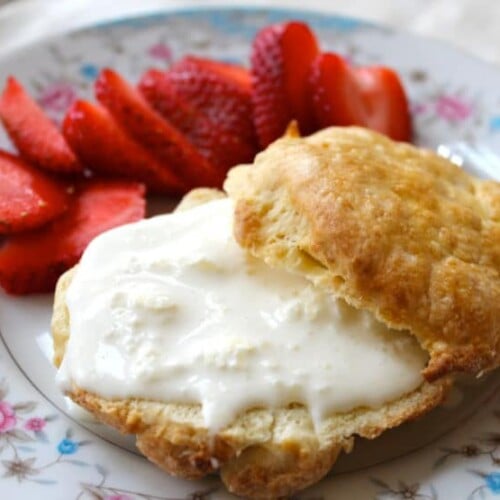 You will also need: For Cream: a double boiler or heatproof bowl and saucepan, pan of ice water. For Scones: mixing bowl, baking sheet, butter or parchment for the baking sheet, rolling pin, biscuit cutter or water glass

McGee, Harold (1984). On Food and Cooking: The Science and Lore of the Kitchen. Scribner, New York, NY.

Lane, John. In Praise of Devon: A Guide to its People, Places, and Character. Green Books, Cambridge, UK.

Nutritional information should be considered an estimate only; please consult a registered dietician, nutritionist, or your physician for specific health-related questions. Read more here. Please note that the recipe above is published using a recipe card plugin, with preexisting software which can auto-calculate metric measurements, as well as change the number of servings. Metric conversions and changes to the number of servings (resulting in different ingredient amounts) will only appear in the ingredient list, and are not changed within the step-by-step directions of the recipe.
3.6K shares
Chocolate Icebox Pie PREVIOUS

Fig Tree in My Front Yard NEXT