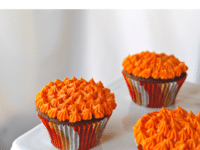 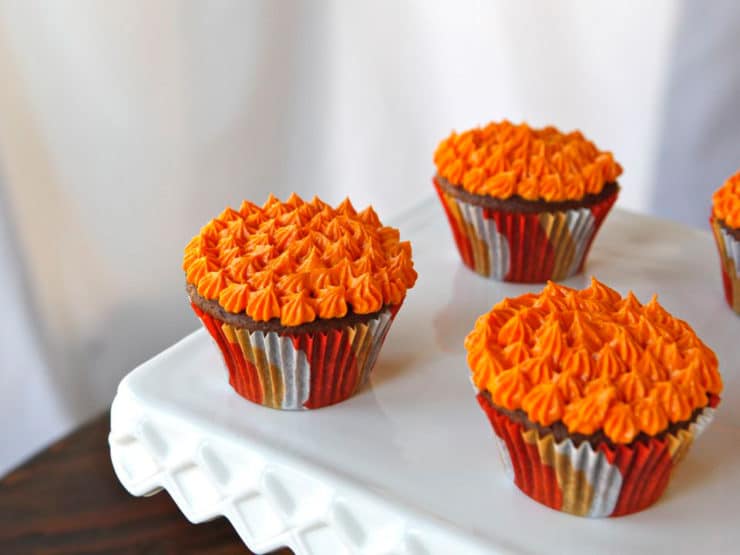 Trick-or-treating in America grew popular between 1920 and 1950. Prior to World War II, the holiday became notorious as teenaged “pranksters” took the opportunity to wreak mayhem on their neighborhoods, egging cars and shattering windows with rocks. After the war, an effort was made to redirect the holiday towards young children. Candy, which had been scarce during the war due to rationing, was given out freely to young trick-or-treaters in order to discourage the often destructive pranking trend. As cookie cutters became commercially available for the first time, holiday cookies were made in the shapes of pumpkins and witches. In addition, neighborhood housewives baked up devil’s food cupcakes topped with frosting in Halloween colors of orange and black. These cupcakes became a popular Halloween treat during the 50’s, given out the same way candy is today.

Despite the name, there is nothing very “devilish” about Devil’s Food Cake. The first printed recipes for the cake appeared in two 1902 cookbooks, Mrs. Rorer’s New Cookbook and The New Dixie Receipt Book. In the late 1800’s, chocolate was used to give flavor to frosting, not as a flavoring for cake batter itself. At that time, when somebody referred to a “chocolate cake,” they generally meant a yellow cake with chocolate frosting. In the late 1870’s, when cocoa processing improved, the American taste for chocolate skyrocketed. For the first time, chocolate was added to cake batter to enrich the flavor and darken the color. At that time, foods that were dark or richly spiced were often referred to as “devilled,” a term which would naturally suit a darker chocolate cake. The name Devil’s Food Cake was also used differentiate the dark, rich chocolate cake from light, spongy Angel’s Food Cake.

I thought it would be fun to make Devil’s Food Cupcakes as a nod to the 1950’s Halloween tradition. After some searching, I located a vintage Devil’s Food Cake recipe in my cookbook files. It was part of a 1943 booklet called “Baker’s Favorite Chocolate Recipes,” a promotional cookbook produced by the General Mills Corporation. Here is the original recipe as it appears in the booklet: 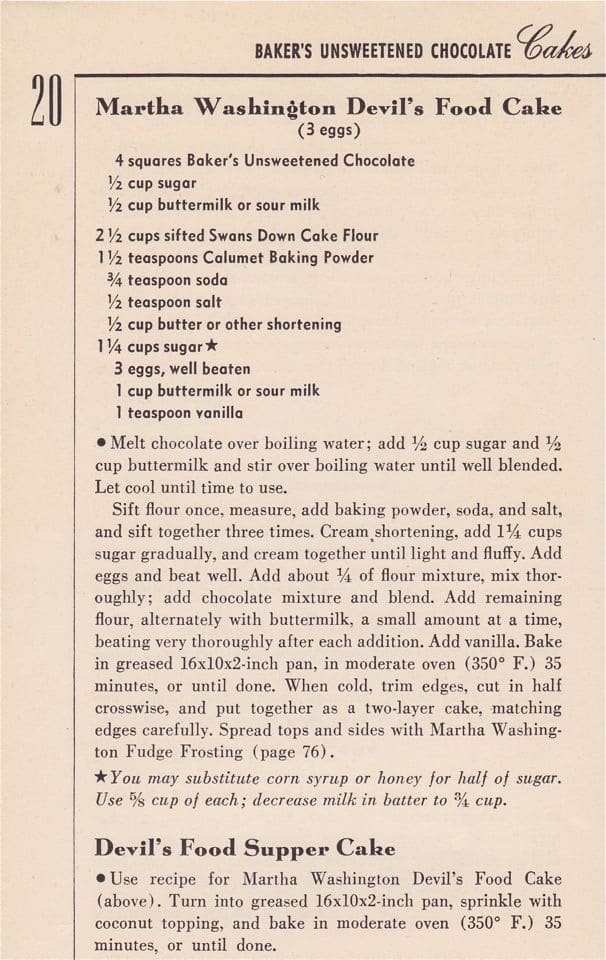 The recipe caught my eye because it claims to be Martha Washington’s recipe for Devil’s Food Cake. I have explored the colonial time period, and I can assure you that this recipe is not even remotely close to the cakes that Martha cooked for George at Mount Vernon. That said, I appreciated the quaint reference to history, so I decided to give the cake a try. I made the recipe as written, modifying it for cupcakes; the modern transcription appears below. Instead of the chocolate icing that is suggested, I used orange-tinted buttercream icing as a nod to the 1950’s practice of frosting cupcakes in Halloween colors. They turned out lovely. The frosted cakes were vibrant and beautiful, especially when paired with a pretty set of colorful cupcake wrappers. Happy Halloween! 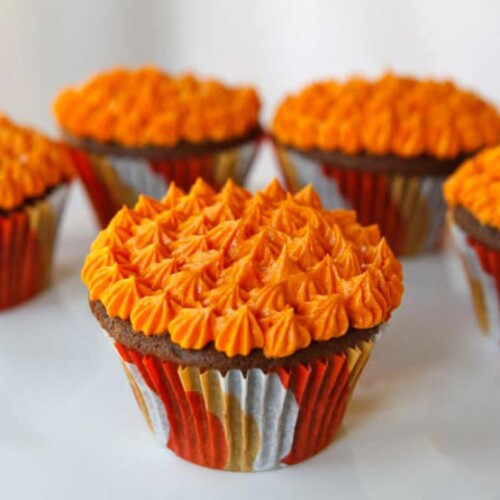 Nutritional information should be considered an estimate only; please consult a registered dietician, nutritionist, or your physician for specific health-related questions. Read more here. Please note that the recipe above is published using a recipe card plugin, with preexisting software which can auto-calculate metric measurements, as well as change the number of servings. Metric conversions and changes to the number of servings (resulting in different ingredient amounts) will only appear in the ingredient list, and are not changed within the step-by-step directions of the recipe.
383 shares
Halloween – A Foodie History PREVIOUS