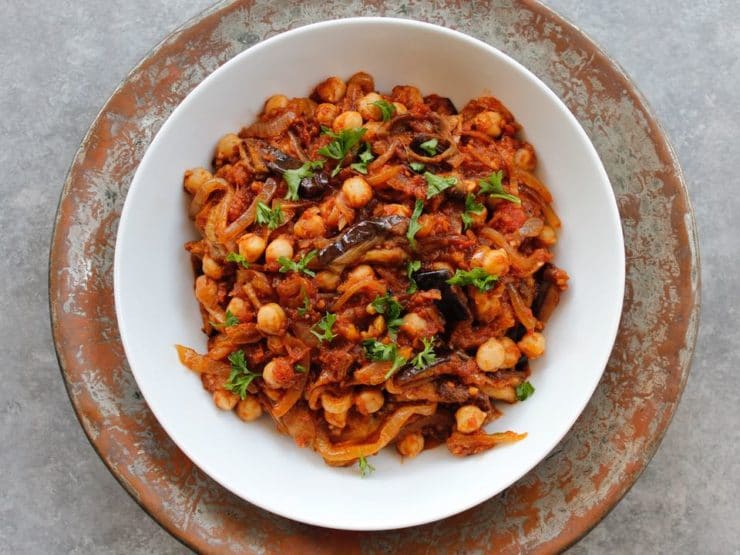 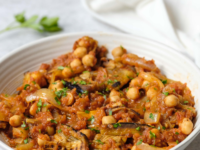 I learned this simple and flavorful recipe for mnazaleh, a vegan eggplant and chickpea stew, in the kitchen of a Druze family in Israel. Pronounced min-ah-zah-lay, this dish is a healthy meatless entree that can be enjoyed alone or served with bread for dipping. 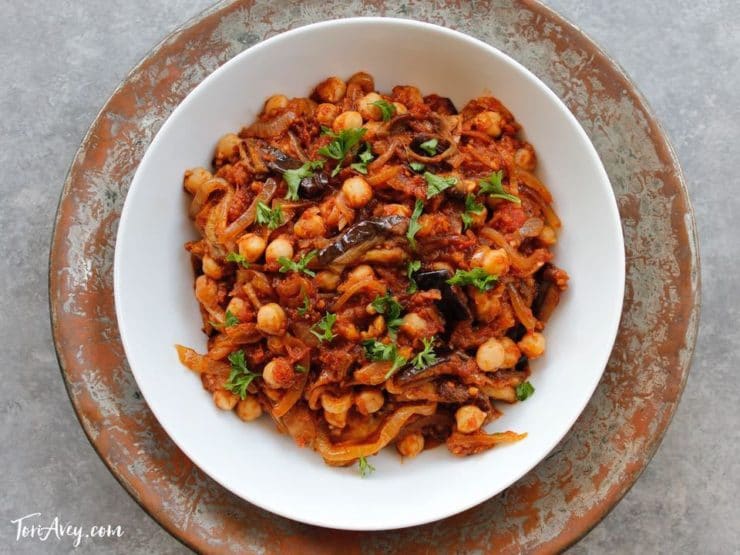 This past summer I had the privilege of visiting with many families in Israel to learn their family recipes. As part of our journey into the north of Israel, we met with Paul Nirens of Galil Eat, who organizes food tours with local families. Paul arranged for Wjee and Amira Basis, a Druze couple, to host us in their home in Daliyat al-Karmel, a Druze village situated on Mount Carmel in Israel. It is the country’s largest and southernmost Druze town with a population of about 17,500.

Wjee and Amira have three sons; two have finished service in the Israel Defense Forces and the youngest is 12 years old. Wjee is a builder who constructed his own home, as well as his sons’ residences. Amira is a devoted home cook who often hosts guests at her home. The couple are non-religious Druze, but they are very much part of the Druze community. They enjoy meeting and cooking with families from around the world through Galil Eat. 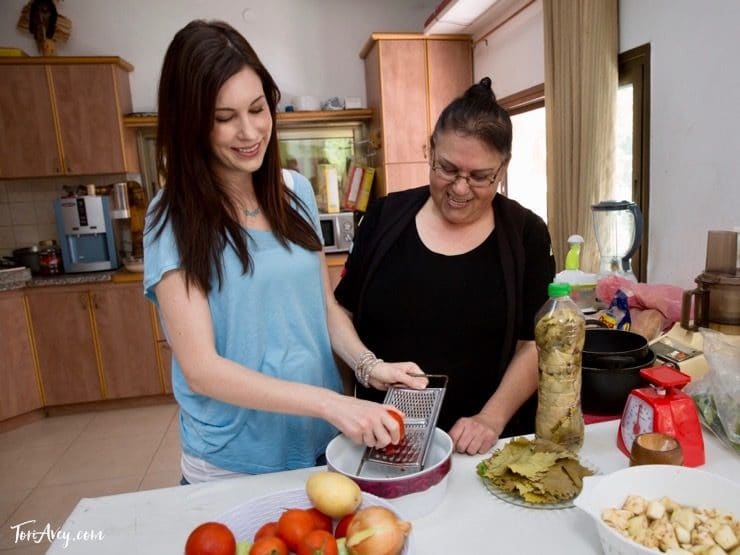 While we were visiting, Wjee told us a little bit about Druze history. The Druze faith has approximately 1 million adherents, most of them in Syria, Lebanon and Israel. The religion began in Egypt in the year 1017; it began as a movement within Islam that was influenced by Greek philosophy and Gnosticism. The faith was preached by Hamza ibn Ali ibn Ahmad, who assembled a group of scholars to establish the movement. The Druze do not have a typical house of prayer or worship; they believe you can pray to god directly anywhere.

A person cannot convert to become Druze; you must be born into the faith. Within the community, religiosity is a choice– one Druze might be religious and another not at all. However, only the religious Druze have access to their holy spiritual books. Wjee inherited an ancient holy book from his father, but he has never dared to open it because he is not religious. In the Druze faith, everyone is considered equal- the religious don’t look down on the non-religious. 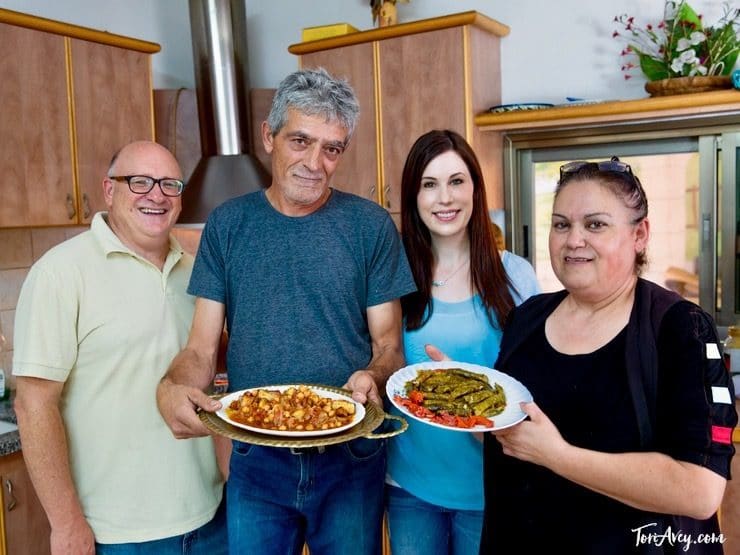 Wjee and Amira welcomed me with open arms into their kitchen, and we cooked together for an afternoon. With Paul’s guidance, the couple shared a few of their favorite family dishes with me. This mnazaleh is just one of the delicious recipes we cooked together. In addition to being a tasty vegan entree, this would make a nice side dish or mezze for a Mediterranean-style meal.

Before sharing the recipe here, I made some adjustments to the basic dish in order to lighten it up a bit. The eggplant is traditionally fried, which soaks up a lot of the oil. The result is delicious and can be made fully on the stovetop, but the eggplant soaks up oil like a sponge. I opted to roast the eggplant instead, which lightens it considerably but does lengthen the cook time and process. Feel free to fry the eggplant if you prefer, it is very tasty that way!

To book your own food tour in the Galilee with Paul Nirens, check out Galil Eat on their official site, Facebook or Instagram. This is not a sponsored post… I just enjoyed my time in Galilee and wanted to share with all of you! 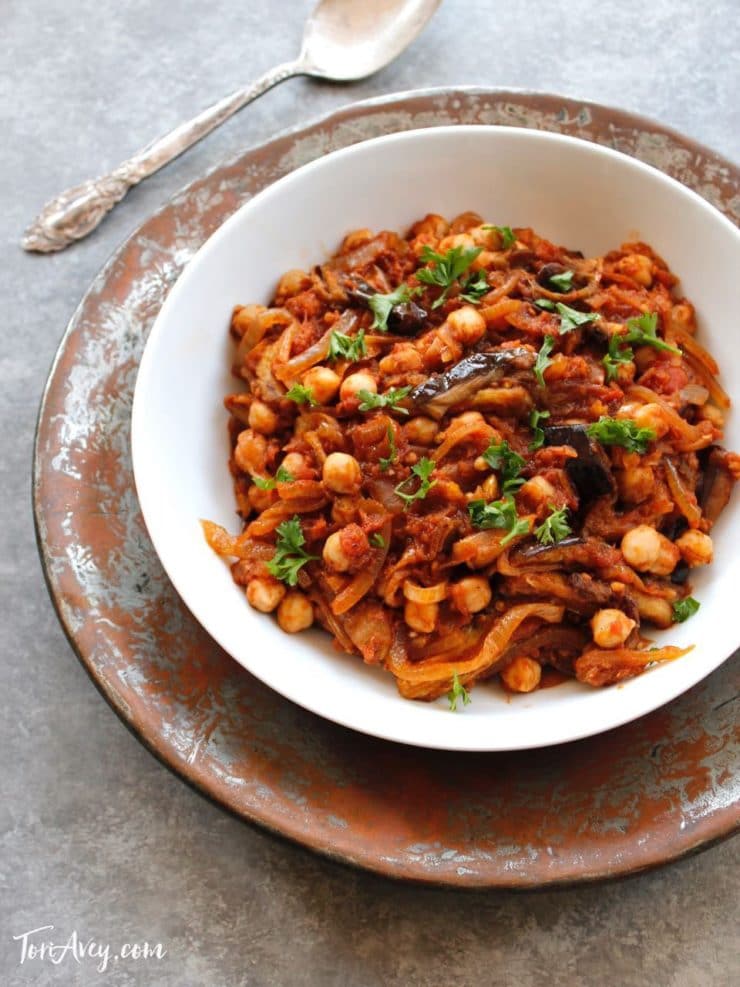 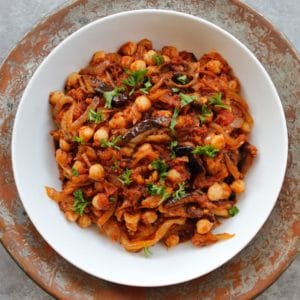 Stay in touch with me on Facebook, Twitter, Pinterest, YouTube and Instagram. Did you make one of my recipes? Tag @toriavey & hashtag #toriskitchen on Instagram or Twitter… I want to see!
Nutritional information should be considered an estimate only; please consult a registered dietician, nutritionist, or your physician for specific health-related questions. Read more here. Please note that the recipe above is published using a recipe card plugin, with preexisting software which can auto-calculate metric measurements, as well as change the number of servings. Metric conversions and changes to the number of servings (resulting in different ingredient amounts) will only appear in the ingredient list, and are not changed within the step-by-step directions of the recipe.
9.0K shares
Curried Vegetable Stew PREVIOUS

How to Make Crispy Perfect Latkes Every Time NEXT