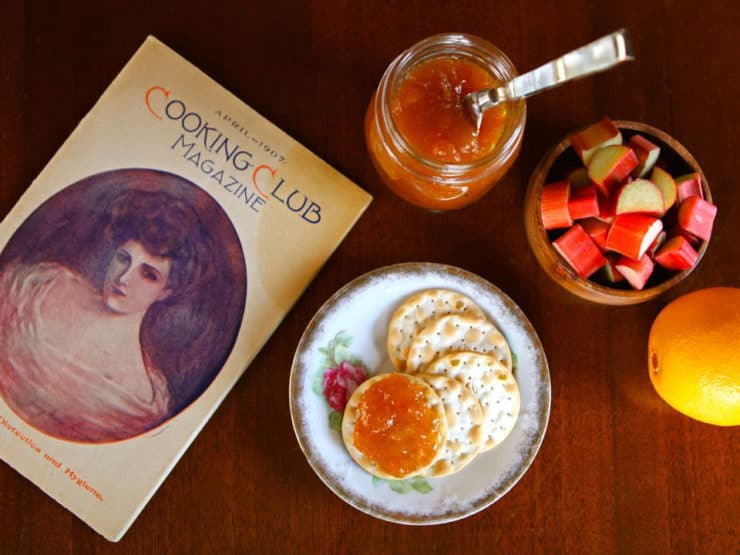 A vintage recipe for rhubarb marmalade, a delicious twist on sweet marmalade jam with step-by-step photos.
451 shares
3.50 from 2 votes
Jump to Recipe Email Me Recipes 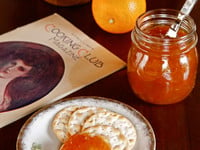 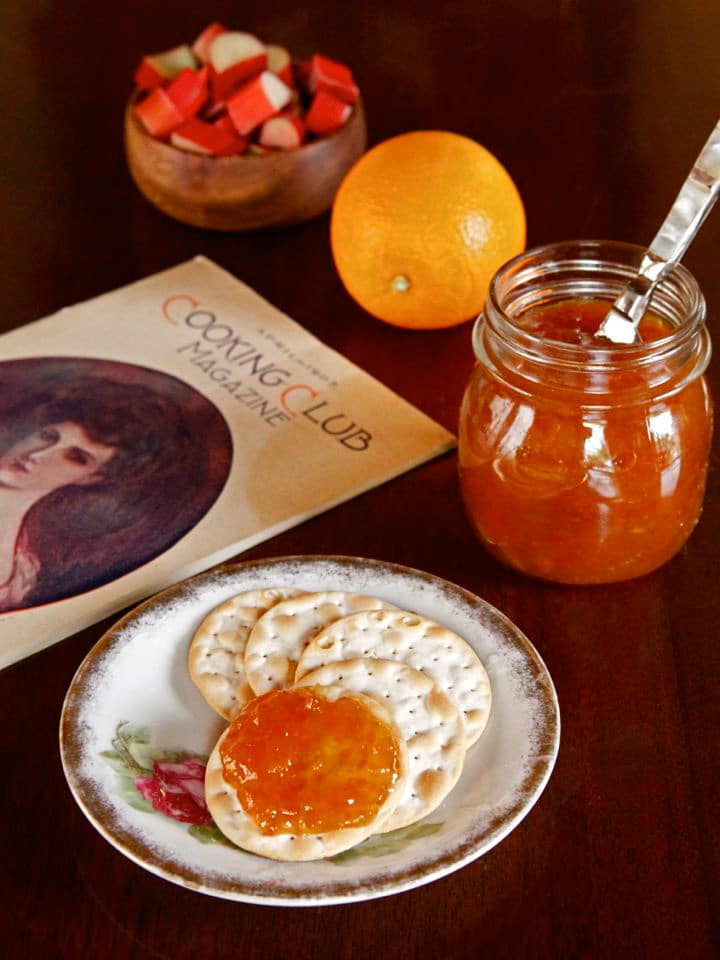 When I hold this April 1907 issue of Cooking Club, I’m transported back to the year that President Theodore Roosevelt shook 8,513 hands in one day, a record-breaking number at the time. The iconic yellow New York City taxicabs began running and charging by the mile that year. Seattle’s Pike Place Market opened for business and James E. Casey founded the American Messenger Company, now known as the United Parcel Service – UPS. Rudyard Kipling, author of The Jungle Book, won the Nobel Prize for literature and Katharine Hepburn, Gene Autry, Frida Kahlo and Orville Redenbacher were born. The year ended with the first electric ball drop in Times Square. 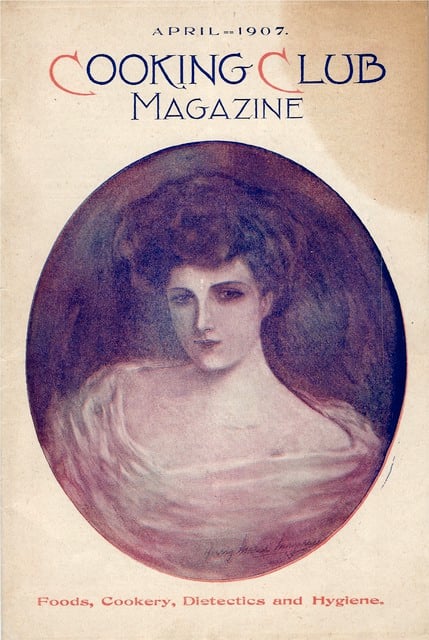 Those of you who have been reading along on my adventures with Cooking Club Magazine will notice some regular features popping up in certain issues. In this issue I was pleased to once again find a menu page titled “Suggestions for Seasonable Dishes.” I find these menus to be a valuable glimpse into the food of the time period. Some of the standout offerings in 1907 include Fried Mush with Maple Syrup, Cold Boiled Tongue with Horseradish, Mashed Potatoes in the Shell, Pineapple Pudding and Puff Gems. Click on the image below for a closer look at the menu. 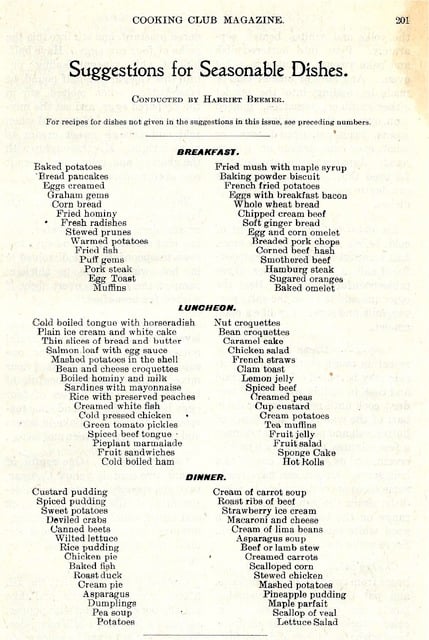 In a short article  titled “Vegetarianism,” the writer attempts to dispel claims that humans benefit more from a meatless diet. This view struck me as interesting, given that vegetarian diets were quite popular at the time. The writer expresses his belief that man is better suited to an omnivorous diet, ending with: “Temperance in all things while availing ourselves of such foods as nature has so bountifully given us, will surely give us better men than indulgence in unnatural fads.” Though vegetarianism certainly isn’t considered a fad any longer, it got me thinking about how many different “fad diets” we see today. I often wonder which fad diets will be considered the future health standard, and which will fade away to obscurity. One can only guess!

In the back pages of the magazine I found this great image that demonstrates how to determine the age of an egg– which seems timely with spring and Easter right around the corner:

Another article titled “Fashions in Cooking and Eating” discusses the growing trend of cooking food simply. “The blending of flavors and combinations of ingredients is not so essential as the retention of those flavors and nutritive qualities which already exist in the materials used.” I’ve mentioned before that Cooking Club is often quite forward thinking, and this is a perfect example. One of the biggest trends in food today is a return to simplicity; cooking in ways that highlight the flavor of the food rather than hiding it inside all kinds of fancy ingredients. I often strive to cook this way in my own kitchen, and was pleasantly surprised to find an emphasis on this style of cooking over 100 years ago.

The following advertisement appears to be selling some sort of device that helps with posture and deep breathing. It “straightens round shoulders and creates a perfect figure for man, woman and child. Expands the chest from 2 to 6 inches and increases your height proportionately,” and “Gives man a commanding appearance.” According to the developer of the product, poor posture can lead to nausea and tired feelings. Whether or not this is true, Nulife reminds me a bit too much of an uncomfortable corset… or some product I saw an infomercial for not long ago!

A back page advertisement for fortune telling was my favorite find in this issue. While listings for astrologers and psychics are quite common in newspapers and magazines today, I was somewhat shocked to find this in a Cooking Club magazine from 1907. I especially love the testimonials claiming that money, love and happiness came as predicted. 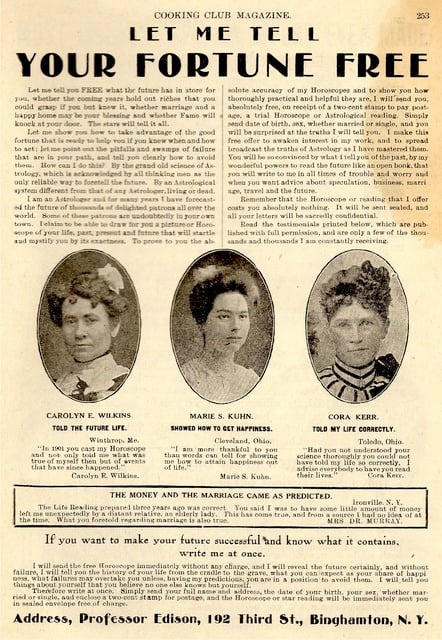 For this month’s recipe, I was inspired by two sections dedicated entirely to rhubarb recipes. I really enjoy rhubarb, though I rarely experiment with it beyond the occasional strawberry rhubarb pie. As the article states, rhubarb “comes so early that it can be preserved before the hot weather begins,” so April seemed like the perfect time to give it a try. There are recipes for rhubarb charlotte, steamed rhubarb pudding and rhubarb with raisins. Last year I began venturing into canning and when I saw a recipe for rhubarb marmalade, I knew I had to make it. The original recipe is below, however as with most Cooking Club recipes, the preparation is a bit vague and took some tweaking. 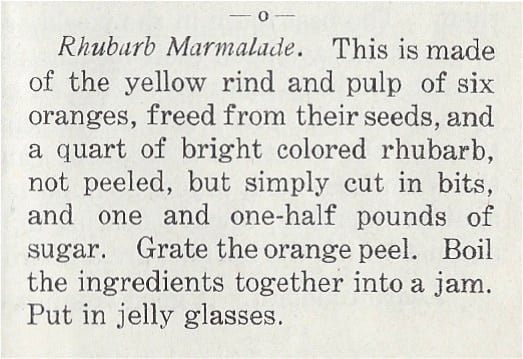 I used the basic proportions outlined above and wrote out a more detailed process based on my knowledge of jams and canning. The result was a very nice marmalade with a subtle hint of rhubarb. If you’re looking for more of a rhubarb flavor, feel free to add another 1/2 pound or more. For a basic orange marmalade, omit the rhubarb completely and replace with another pound of oranges.

I love it when an old cooking magazine like this gives me a new twist on a classic treat. Rhubarb and marmalade… who would have thought? And yet it makes perfect sense. Orange and rhubarb were made for each other! What are some of your favorite ways to cook with rhubarb? 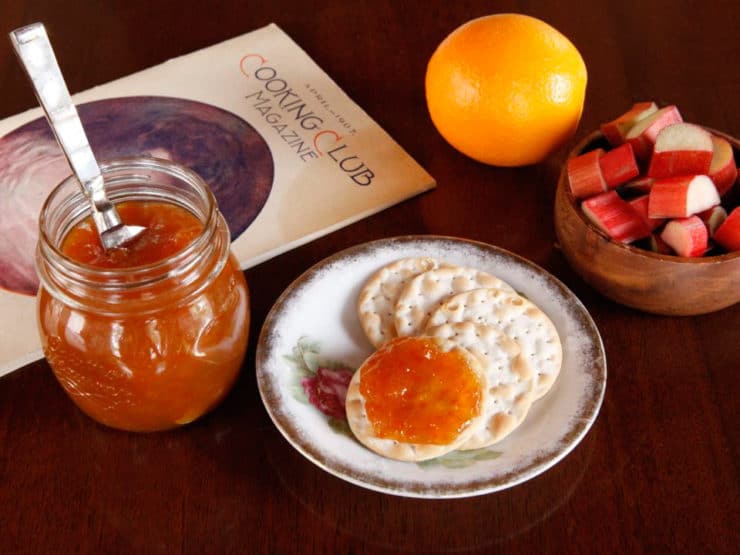 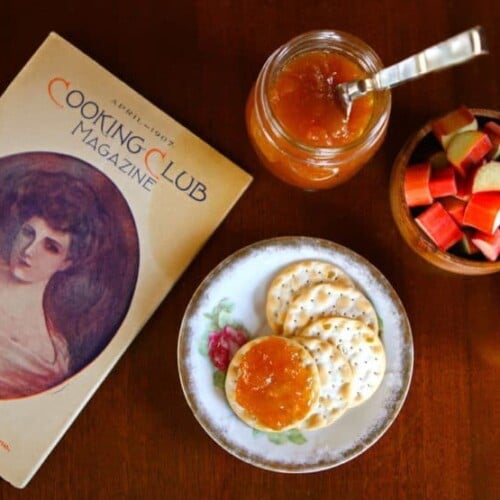 Nutritional information should be considered an estimate only; please consult a registered dietician, nutritionist, or your physician for specific health-related questions. Read more here. Please note that the recipe above is published using a recipe card plugin, with preexisting software which can auto-calculate metric measurements, as well as change the number of servings. Metric conversions and changes to the number of servings (resulting in different ingredient amounts) will only appear in the ingredient list, and are not changed within the step-by-step directions of the recipe.
451 shares
Marak Perot – Compote PREVIOUS