Sukkot – The Harvest Holiday and Thanksgiving 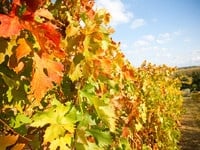 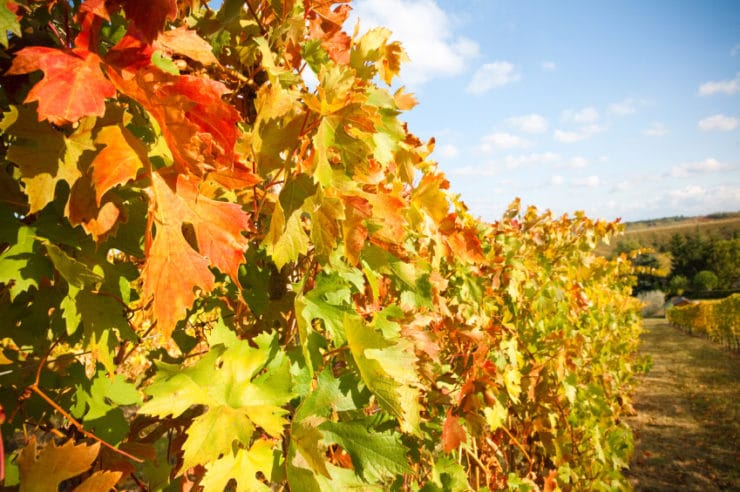 Did the Jewish holiday of Sukkot inspire the first Thanksgiving?

Sukkot, also known as the Feast of Tabernacles, is a Jewish holiday celebrated on the 15th of Tishrei on the Hebrew calendar. While not as widely known or celebrated as some other Jewish holidays, Sukkot is a very important part of the Jewish experience. Historically many important events have occurred during Sukkot, including King Solomon’s dedication of the First Temple of Jerusalem.

The Sukkot holiday finds its origin in a Biblical mandate. In the Torah, God commands that the Jews must live in temporary outdoor structures for seven days in remembrance of the Israelites who fled from Egypt with Moses:

So beginning with the fifteenth day of the seventh month, after you have gathered the crops of the land, celebrate the festival to the Lord for seven days; the first day is a day of rest, and the eighth day also is a day of rest. On the first day you are to take choice fruit from the trees, and palm fronds, leafy branches and poplars, and rejoice before the Lord your God… All native-born Israelites are to live in booths so your descendants will know that I had the Israelites live in booths when I brought them out of Egypt. 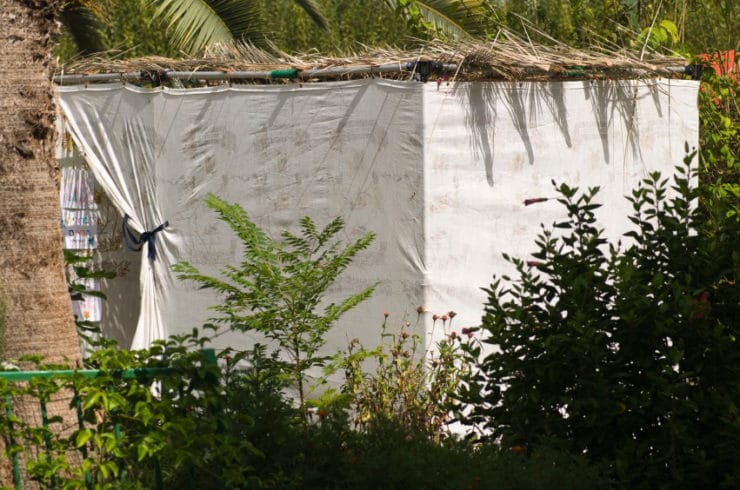 This is an example of an outdoor sukkah structure.

In this passage, God commands the Jews to build “booths” and live in them during the festival of Sukkot. These temporary structures are known as “sukkah,” and they can range in size from small (just large enough for two people) to enormous. A sukkah is constructed with three or four walls and a roof known as a “schach” made from natural organic materials. It must be at least three feet tall, and you must be able to see the sky through the roof—if you can’t, the sukkah is not considered “kosher.” Traditionally, Jewish families decorate the sukkah with a variety of decorations including homemade ornaments, paintings, and streamers. Often decorations are inspired by harvest foods and the seven species of Israel mentioned in Deuteronomy: grapes, figs, pomegranates, olives, dates, wheat and barley.

Rabbinic law encourages Jews to live, sleep, and eat in the sukkah for all seven days of the festival, weather permitting. Most modern Jews do not actually sleep in the sukkah; it is used instead as a special outdoor dwelling place for dining together with family and friends.

Which brings us to what I consider the most exciting part of Sukkot—the food! 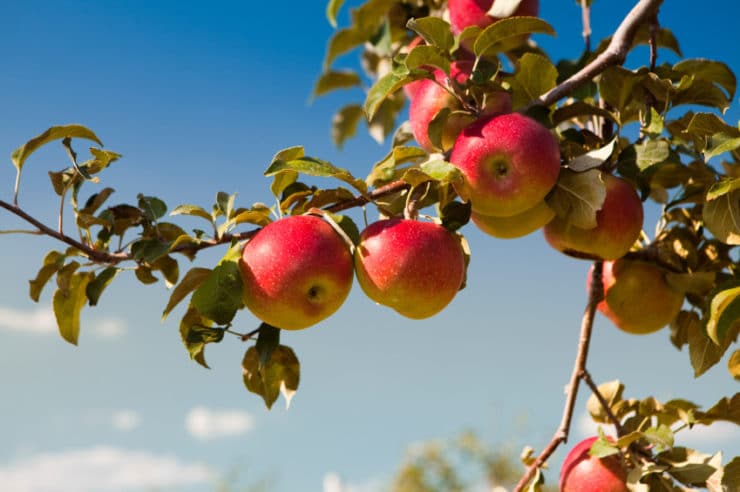 Sukkot is a harvest holiday, which means that the foods served are seasonal in nature. The Sukkot menu generally features vegetables and fruits that are harvested at the turn of the season—apples, squash, eggplants, grapes, etc. As a food lover, this holiday is one of my favorites because we are encouraged to create dishes from fresh and delicious seasonal ingredients. The arrival of Sukkot ushers in the autumn season; Sukkot foods are inspired by the bounty of the harvest.

Does this all sound a little familiar? You might have noticed that the Sukkot holiday resembles the American tradition of Thanksgiving. Believe it or not, the similarities between Sukkot and Thanksgiving actually have a historical frame of reference. Before coming to the New World, the Pilgrims lived for a short time among Sephardic Jews in Holland. In fact, our American Thanksgiving tradition may have been indirectly inspired by the Jewish holiday of Sukkot. 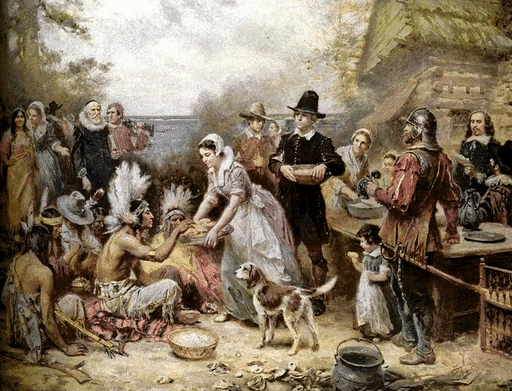 Both the Pilgrims and the Jews were victims of religious persecution. The Sephardic Jews were expelled from Spain in 1492; they scattered and eventually settled in different parts of Europe and the Middle East. A small group of Jews made Holland their home. The Pilgrims escaped England in 1608 to avoid the increasing intolerance of their Separatist views by the Bishop of Lincoln and Archbishop of York. Both the Jews and the Pilgrims settled in Holland because of the country’s religious tolerance.

The Pilgrims only spent a decade in Holland before leaving for the New World (America), but they were certainly there long enough to interact with the local Jewish population; the Pilgrims also would have witnessed Sukkot celebrations while living among the Sephardic Jews of Holland. 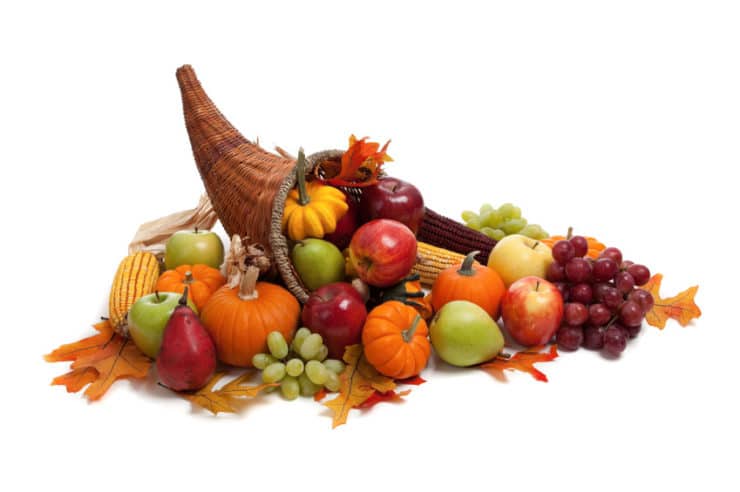 The Thanksgiving cornucopia bears a strong resemblance to the Jewish shofar, blown during Rosh Hashanah and Yom Kippur.

This possible tie between Thanksgiving and Sukkot is pretty intriguing, and can be seen on many symbolic levels. While harvest festivals were not unique during that time period (many Christian groups had their own harvest celebrations), there are some particular aspects of Thanksgiving that seem at least loosely connected to Sukkot. The first Thanksgiving meal in 1621 is said to have been eaten out-of-doors, which would correspond to the Sukkot tradition of dining outside in the sukkah. Sukkot, like Thanksgiving, is a holiday of welcoming; the Pilgrims welcomed the Wampanoag Native Americans to the original Thanksgiving table just as Jews are encouraged to welcome friends and extended family to dine in the sukkah. This was only fitting; the Wampanoag people and their leader, Massasoit, taught the Pilgrims vital harvesting and life skills after their arrival in the New World; the Pilgrims would not have survived without their help and guidance. The cornucopia, a Thanksgiving symbol of plenty, resembles the Jewish shofar that is blown during Yom Kippur (the holiday that precedes Sukkot). And of course, there’s the food: both Sukkot and Thanksgiving feature bountiful menus of delicious, seasonally-inspired foods.

Details on the very first Thanksgiving meal are slim. According to the Oxford Companion to American Food and Drink, “The first association between the Pilgrims and Thanksgiving appeared in print in 1841, when Alexander Young published a copy of a letter dated December 11, 1621, from Edward Winslow, who described a three-day event held after the crops were harvested. In a footnote to the letter Young claimed that this was ‘the first Thanksgiving.'” Beyond these details, we know very little about that first Thanksgiving meal. We do know that it was a multi-day celebration, similar to Sukkot– some accounts say it lasted three days, others say seven. Over the years, it became customary to celebrate a single day of thanks during the harvest season, which evolved into the holiday we now celebrate as Thanksgiving.

While we may never know if the first Thanksgiving was directly inspired by Sukkot, it is fun to ponder!

Nutritional information should be considered an estimate only; please consult a registered dietician, nutritionist, or your physician for specific health-related questions. Read more here. Please note that the recipe above is published using a recipe card plugin, with preexisting software which can auto-calculate metric measurements, as well as change the number of servings. Metric conversions and changes to the number of servings (resulting in different ingredient amounts) will only appear in the ingredient list, and are not changed within the step-by-step directions of the recipe.
1.6K shares
Reflections on Yom Kippur PREVIOUS