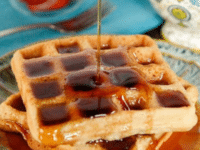 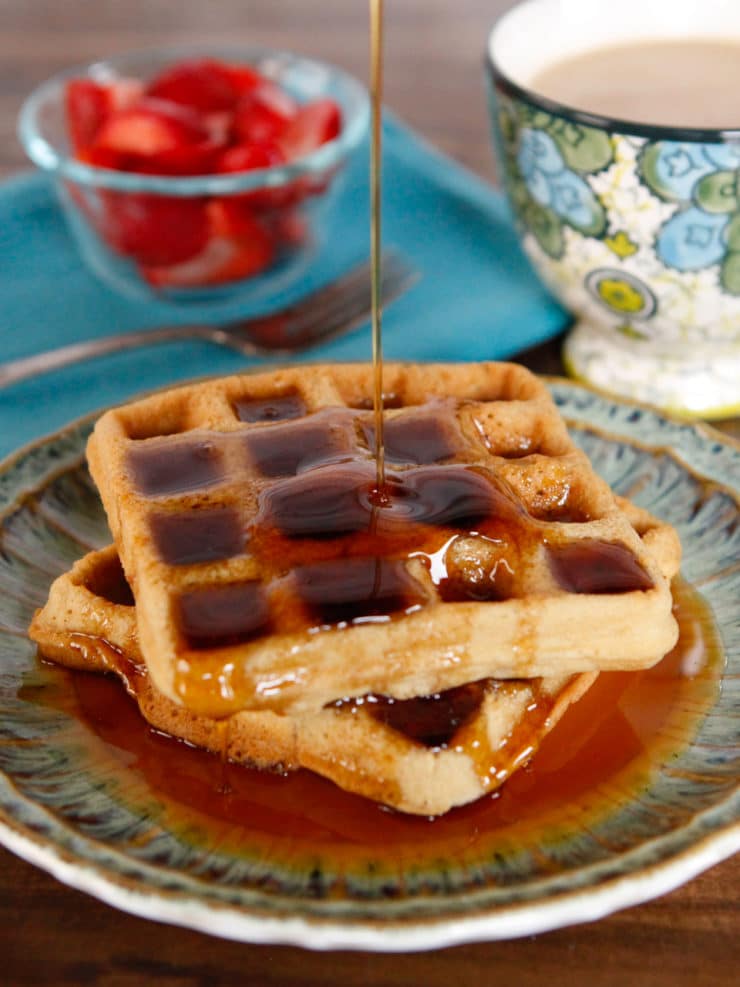 I doubt Thomas Jefferson knew what tahini is, but I’m guessing he would have gone nuts for these waffles. I got the idea to develop them when I was making a batch of my stepdaughter’s favorite peanut butter pancakes. My mind wandered to peanut butter waffles, then I thought– why not try tahini as a nut butter replacement for folks with nut allergies? I mentioned this idea to my test kitchen assistant Gary, who took it one step further by suggesting that we use brown rice flour in place of traditional all purpose flour. Gary’s been cooking gluten free a lot lately, and I liked the idea of making this recipe accessible to my gluten free readers. We swapped out white sugar for coconut sugar, which is lower in fructose and may also have a slightly lower glycemic impact than traditional can sugar (it’s also got a unique flavor that I really love). Coconut milk was used in place of regular milk. We whipped the egg whites to help create a light, crisp-yet-fluffy texture. Before I knew it, we had created a seriously tasty waffle that was also gluten free, dairy free, naturally sweetened and uniquely flavored with protein-rich tahini. I topped them with date honey syrup (silan) and the flavor was off-the-charts delicious. Nobody would ever know these are gluten free, they are every bit as tasty as regular waffles with a slightly nutty flavor that my family absolutely loved. I know you’ll enjoy them too!

Nutrition Facts
Gluten Free Tahini Waffles
Amount Per Serving
Calories 368 Calories from Fat 180
% Daily Value*
Fat 20g31%
Saturated Fat 12g75%
Cholesterol 69mg23%
Sodium 91mg4%
Potassium 551mg16%
Carbohydrates 40g13%
Fiber 3g13%
Sugar 5g6%
Protein 8g16%
Vitamin A 110IU2%
Vitamin C 1.9mg2%
Calcium 135mg14%
Iron 2.6mg14%
* Percent Daily Values are based on a 2000 calorie diet.
Tried this recipe?Let Us Know How It Was In The Comments.
5 from 2 votes
Nutritional information should be considered an estimate only; please consult a registered dietician, nutritionist, or your physician for specific health-related questions. Read more here. Please note that the recipe above is published using a recipe card plugin, with preexisting software which can auto-calculate metric measurements, as well as change the number of servings. Metric conversions and changes to the number of servings (resulting in different ingredient amounts) will only appear in the ingredient list, and are not changed within the step-by-step directions of the recipe.