Home / Recipes / Dairy / What They Ate at Hearst Castle – Welsh Rarebit
4.7 from 3 votes
Jump to Recipe Email Me Recipes
187shares 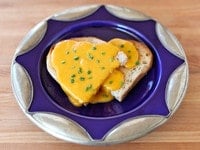 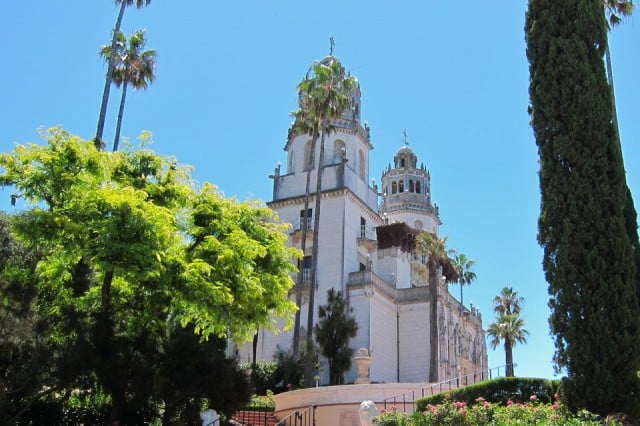 I grew up near San Luis Obispo, an idyllic town on the Central Coast of California. The rugged Pacific coastline, dark sapphire waves and golden hills provided me a bountiful natural playground. I spent countless childhood weekends hunting for seashells, fishing for sanddabs and exploring the tide pools. Growing up surrounded by natural beauty was a privilege, one I appreciate all the more now that I’m living in the noise and traffic jams of Los Angeles. Every so often, I feel the need to return to my roots… to the open spaces and bracing ocean breeze of the Central Coast. In the summer of 2012 I did just that, taking a road trip up the coast of California. My first stop was Hearst Castle, the historical ranch home of William Randolph Hearst. Nestled in the hills above Highway One, 42 miles north of San Luis Obispo and 94 miles south of Monterey, this magnificent estate was Hearst’s dream home, an unfinished 28-year construction project that now stands as a state historic park and museum. Today, the castle receives roughly 1 million visitors per year. 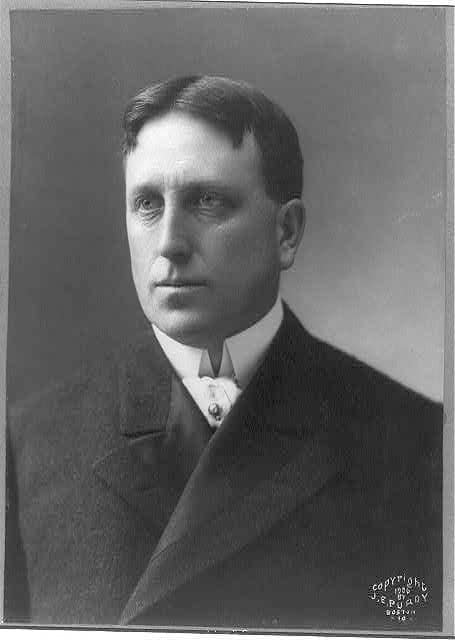 William Randolph Hearst was a wealthy and powerful newspaper publisher who changed the face of American journalism. Born in San Francisco in 1863, Hearst first gained prominence when he took over the San Francisco Examiner newspaper from his father in 1887. Hearst employed some of the best journalists in America and used new tactics to help his paper gain a massive readership. In 1895 Hearst acquired another paper, the New York Journal, putting him in direct competition with rival newspaper proprietor Joseph Pulitzer. His success with the Journal helped him to acquire 28 additional newspapers and magazines, as well as radio stations and movie companies, making him one of the wealthiest men in the world.

Hearst lived a colorful, often controversial life. For several years he dabbled in politics; in 1906 he ran for governor of New York, narrowly losing to opponent Charles E. Hughes. After giving up his political ambitions, Hearst embarked on a long-standing extramarital affair with actress Marion Davies. Orson Welles’ film Citizen Kane is very loosely based on Hearst’s life story. Over two decades after Hearst’s death, his granddaughter Patty Hearst gained notoriety after being kidnapped by a violent revolutionary fringe group known as the Symbionese Liberation Army. In a likely case of Stockholm Syndrome, Patty sympathized with her kidnappers and helped them to rob a bank, after which she was arrested and jailed (she was later pardoned). Even now, more than 60 years after his death, Hearst’s life and achievements continue to fascinate. Nowhere is his impressive legacy more evident than at Hearst Castle, the most beloved project of the newspaper magnate’s life.

Hearst Castle stands on 250,000 acres of coastal ranchland that William Randolph Hearst inherited from his father, George Hearst, a wealthy silver and gold miner. The ranch site was originally 48,000 acres; William later acquired over 200,000 more. Originally known as “Camp Hill,” the land served as a rustic ranch. Hearst traveled there frequently to escape the city; his family and friends would camp there in elaborate tents. Over time, Hearst desired a more permanent residence, a place where he could entertain his world-famous guests in style. 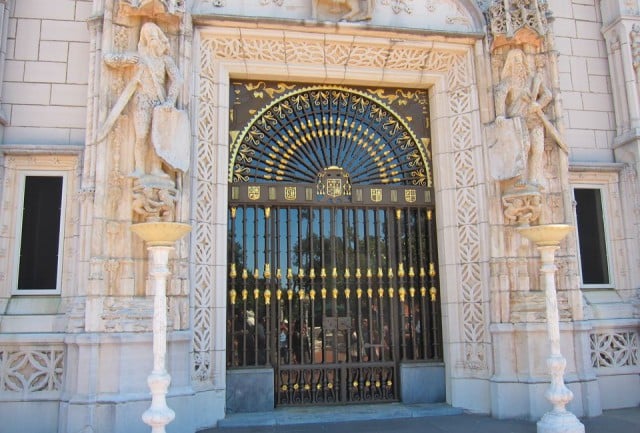 The front entryway to the main residence.

In 1919 Hearst enlisted the help of Julia Morgan, a famed San Francisco architect, to design the estate. For the home site, Hearst chose a rocky perch with a view for miles. He named the site “La Cuesta Encantada” – The Enchanted Hill. Working together, Hearst and Morgan spent 28 years designing Hearst Castle. By 1947, they had created an estate of 165 rooms and 127 acres of gardens, terraces, pools and walkways. 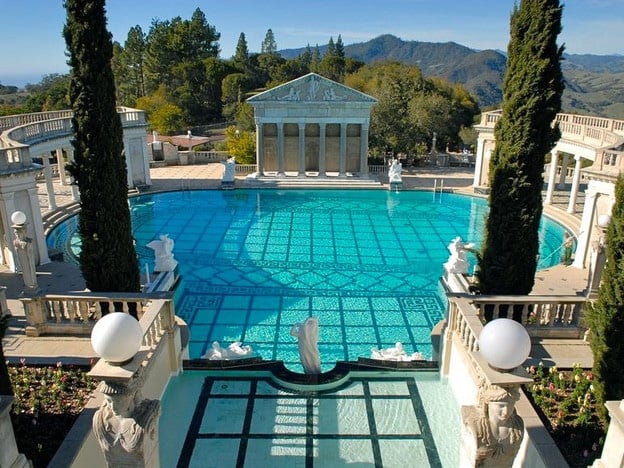 The Neptune Pool at Hearst Castle

As a child I visited the Castle a few times with my grandparents and on elementary school field trips. On my most recent visit, I took the Grand Rooms tour, which gave me a glimpse of the main social rooms in the residence. Of particular interest to me, of course, was the Dining Room. Today it is known as the “Refectory,” the term for a monastery dining hall. If this room looks familiar to you, it may be because you’ve seen the Harry Potter films. The dining hall set at Hogwarts Academy was modeled after it. 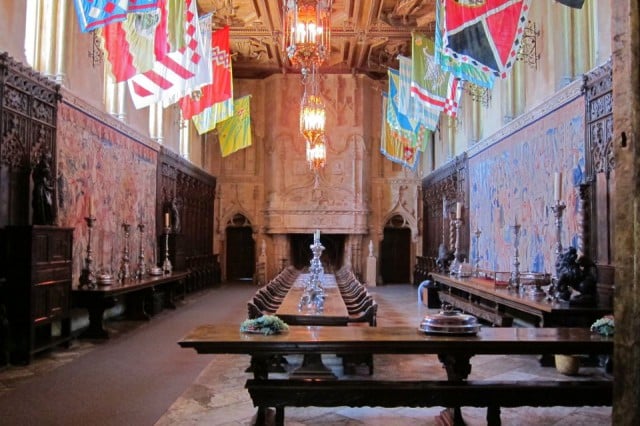 The Hearst Castle Refectory is very grand, large in scale and filled with rare museum-quality furnishings. The room measures 67 feet long and 27 feet wide. The walls rise 27 feet to an ornate carved wooden ceiling, which originally belonged to a 16th century monastery in northern Italy. The walls of the room are lined with Gothic Flemish tapestries and paneled with 15th century choir stalls from a Cathedral in Spain. Silken Italian flags known as Ward banners, some over 400 years old, hang between the French Gothic windows. An enormous French Gothic fireplace gapes at the end of the room, the largest of 38 fireplaces in the Castle. The dining tables are monastic refectory tables. Pieces of Hearst’s large antique silver collection can be seen throughout the room.

Despite its valuable antique tapestries and museum-like decor, the food served at Hearst Castle was somewhat rustic. Hearst had always envisioned the castle as his “ranch residence,” which meant that the meals were comprised of fine quality comfort-style foods.

Here is a sample daily menu from the ranch. The menu always included a film that would show in the Castle’s movie theater after dinner. This menu was served on November 28, 1945: 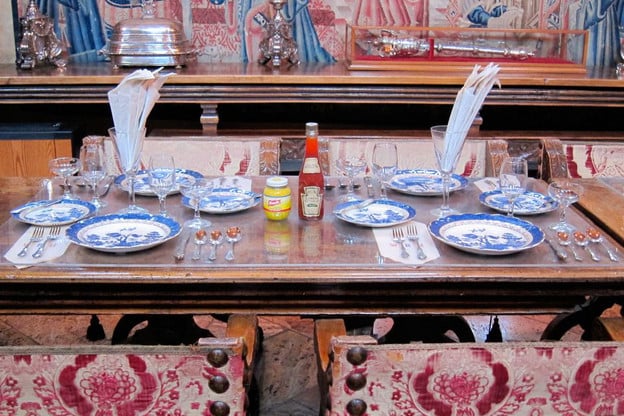 A typical place setting for dinner at Hearst Castle

Here is a sample daily menu from the ranch. The menu always included the film that would show in the Castle theater after dinner. This menu was served on November 28, 1945:

Food was served on Real Old Willow English China. Casual silverware and paper napkins were used, even though the room itself was filled with fine antique silver. As you can see by the menu, meals served at the Castle were generally far more relaxed and “ranch-style” than their refined surroundings. 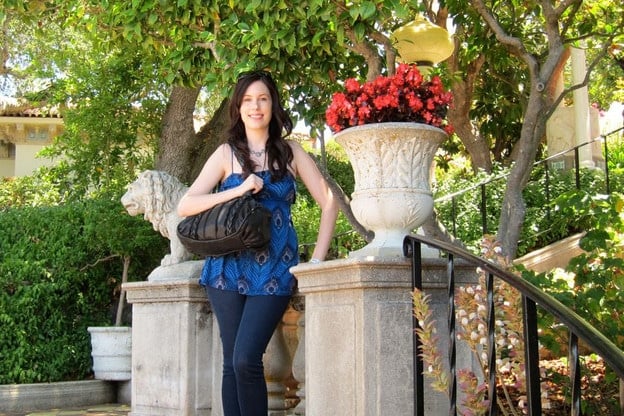 After touring the main residence, we walked around the gorgeous gardens and explored the grounds. The place is teeming with colorful flowers, lovely trees, and ancient marble statues and artifacts. I could have stayed there for hours, languidly relaxing in the shade and smelling the fresh flowers and ocean breeze. Alas, we had to move on– we had a long drive ahead of us. 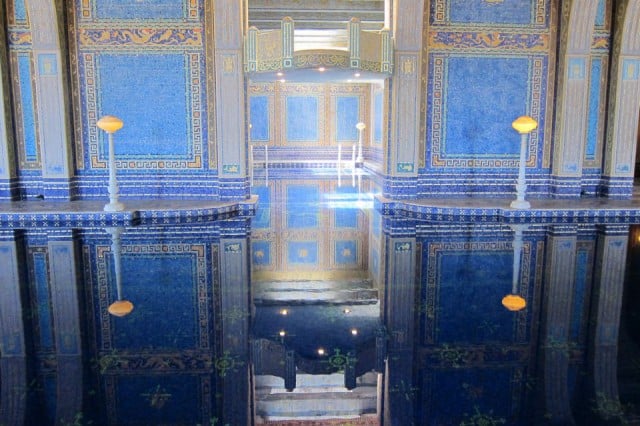 On our way back to the buses, which shuttle guests up and down the winding driveway to the Castle, we were treated to a glimpse of the gorgeous indoor Roman Pool. The pool is decorated floor to ceiling with intricate blue tiled mosaic patterns. The pool is styled after ancient Roman baths; the mosaics are inspired by the 5th Century Mausoleum of Galla Placidia in Ravenna, Italy. My sixth grade teacher Mr. Smith was a part time tour guide at the Castle. I remember him telling our class that once a year, the Castle shuts down early and allows all of the employees to have a holiday party in the Roman Pool. How cool is that?! 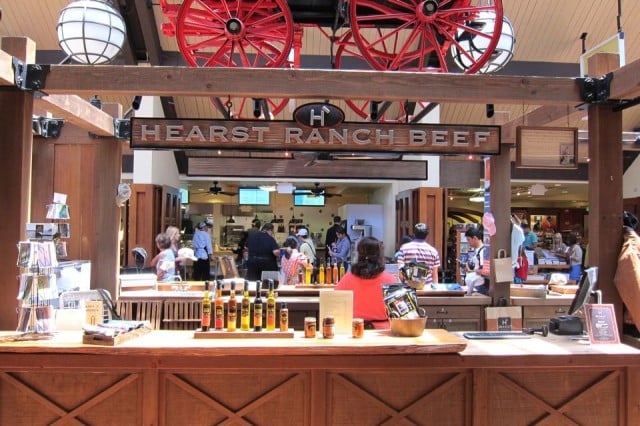 On the way out, we passed by the Hearst Ranch Beef stand. The 250,000 acres surrounding the castle are now home to a large herd of free range cattle. The high quality, grass-fed and grass-finished meat can now be purchased in Whole Foods across the country. You can also buy it online at the Hearst Ranch website.

Here are some Hearst Ranch cattle we saw on the way out. Check out the view they have each day– not too shabby! 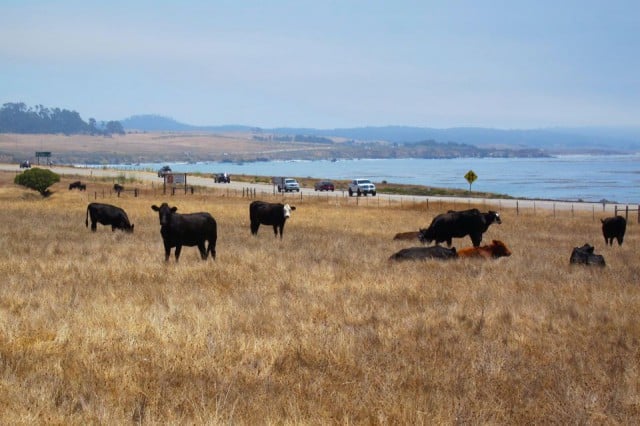 A few months before my trip, I ordered a used cookbook online called “The Enchanted Hill Cookbook.” It has since been republished under a new name, “The Castle Cookbook.” Two Hearst Castle kitchen staff members wrote the book; it contains several recipes from the estate’s glory years. After my tour of the castle, I picked up the book and began browsing through the recipes. I came across a simple recipe entitled “William Randolph Hearst’s Welsh Rarebit.” In the book’s introduction, Hearst’s son William Randolph Hearst Jr. makes reference to the dish as he discusses his father’s eating habits:

Lunch would be about 1:30 p.m., dinner about 8:30 or 9:00 p.m., followed by a movie, and if the night would run, as it frequently did, for an hour or so later, the chances were better that even he would be in the kitchen either grabbing a snack of cold meat and cheese for himself, or making a Welsh rarebit for all comers. The latter dish he made with pride and some beer, but whatever the recipe, I know it was a favorite of all those who were fortunate enough to partake of it. For all I know he might, in some quarters, have been considered a gourmet. Certainly he knew, appreciated, served and ate good food.

The cookbook contains Hearst’s own recipe for Welsh Rarebit, as recalled by the Hearst Castle kitchen staff. Though it may sound like an old-fashioned dish made of rabbit, Welsh Rarebit (sometimes called Welsh Rabbit) is actually a simple dish made from toast and melted cheese. For Hearst’s version of this dish, the cheese and butter would have been procured from the castle’s on-site dairy. The bread would have been baked fresh on site. In fact, most foods at the castle were grown and made there. Fruits and nuts were picked from the orchards, fresh vegetables were grown and raised nearby, and beef and poultry were raised and butchered at the ranch. Dry ingredients and pantry items, like flour and Worcestershire sauce, were purchased in bulk.

As I made Hearst’s Welsh Rarebit at home, I began to daydream about the castle. I imagined myself in the grand kitchen, together with a cast of Hollywood legends, watching Hearst make us a late night snack. What a fun way to taste the history of La Cuesta Encantada.

If you’re interested in visiting Hearst Castle, be sure to make reservations through the Hearst Castle website. The tours can fill up in advance, especially during the popular summer months, so plan ahead. It’s a journey well worth making– touring the Castle feels like taking a step back in time. 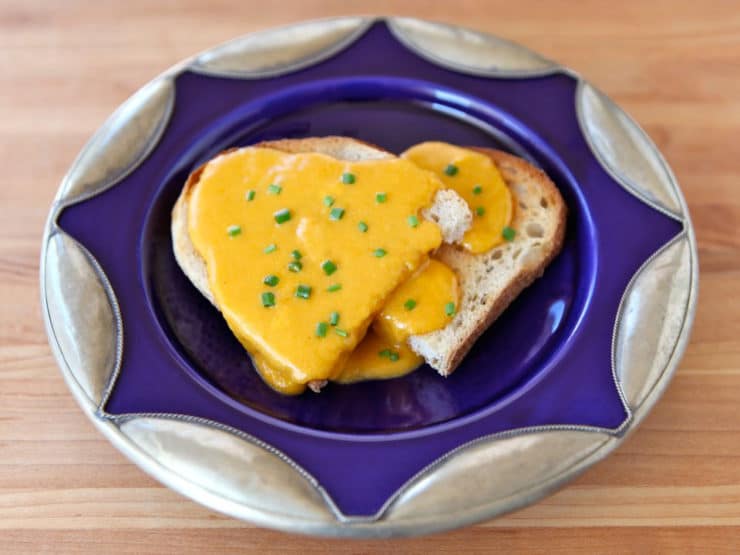 Nutrition Facts
William Randolph Hearst's Welsh Rarebit
Amount Per Serving
Calories 259 Calories from Fat 180
% Daily Value*
Fat 20g31%
Saturated Fat 13g81%
Cholesterol 86mg29%
Sodium 369mg16%
Potassium 75mg2%
Carbohydrates 1g0%
Protein 15g30%
Vitamin A 680IU14%
Calcium 412mg41%
Iron 0.5mg3%
* Percent Daily Values are based on a 2000 calorie diet.
Tried this recipe?Let Us Know How It Was In The Comments.
4.7 from 3 votes
Nutritional information should be considered an estimate only; please consult a registered dietician, nutritionist, or your physician for specific health-related questions. Read more here. Please note that the recipe above is published using a recipe card plugin, with preexisting software which can auto-calculate metric measurements, as well as change the number of servings. Metric conversions and changes to the number of servings (resulting in different ingredient amounts) will only appear in the ingredient list, and are not changed within the step-by-step directions of the recipe.