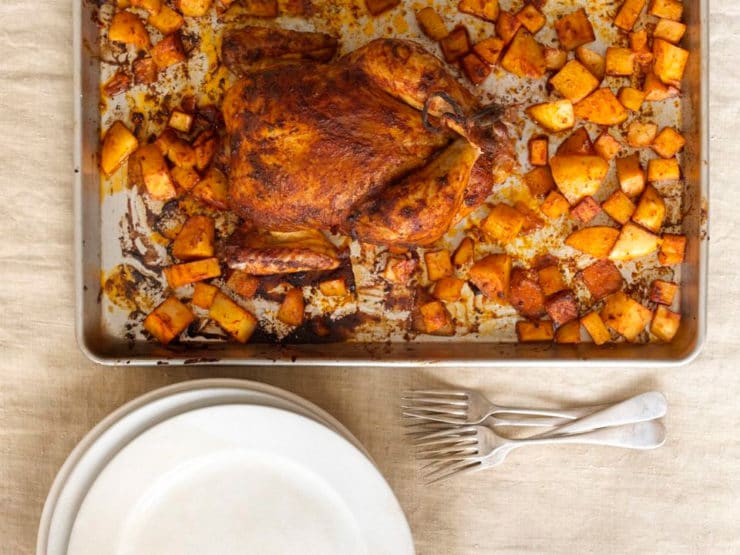 Recipe for roast chicken with red pepper paste and roasted potatoes. A great dish for your family any night of the week. Kosher for Passover
132 shares
5 from 2 votes
Jump to Recipe Email Me Recipes 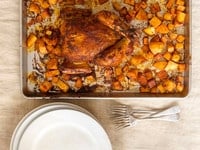 We’re in the middle of Passover week, and if you’re like me, you’re itching to get a little creative with your weeknight cooking. Leave it to David Leite, author of The New Portuguese Table and publisher of Leite’s Culinaria, to spice up our regular roast chicken with a fabulous homemade Amped-Up Red Pepper Paste. It’s sort of like a Portuguese version of harissa. The red wine and smoked paprika make it truly special. Smother a roast chicken and potatoes with this stuff, and holy moly, that’s dinner! Who says Portuguese and Passover don’t mix? I have the utmost respect for David’s well tested recipes and witty, intelligent writing. Be sure to head over to Leite’s Culinaria when you’re done checking out this recipe for more spectacular ideas.  ~ Tori

You’re probably wondering: What’s a nice goyem boy doing in a Jewish place like this? And that’s understandable. After all, I’m a first-and-a-half generation Portuguese American (Poppa Leite is from The Azores, Portugal, and Momma Leite was born in the States to two Portuguese emigrants.) Because of the surprising social similarities between Jewish and Portuguese cultures, I have been named an Honorary Jew by my circle of Jewish friends. That meant I was invited to a goodly number of Passover Seders. And being the youngest at the table, I always got to ask the Four Questions. But, of course, time marches on and soon my friends’ kids and their families began joining us at the table, and I reluctantly passed the torched.

My late friend Deborah, always told me that it was my duty as an Honorary Jew to have many dishes in my repertoire, including a brisket and a roast chicken. While I’m still working on my brisket, I have the chicken down pat.

This chicken recipe leans upon classic Portuguese flavors, supplied by the Amped-Up Red Pepper Paste (click here for recipe), which my friends call “Portugal in a Jar.” It includes smoked paprika, wine, garlic, tomato paste, parsley, cilantro, and more. It’s rubbed under and over the skin for a deeply colored and flavored bird. Plus the roast potatoes get an extra kick from the paste and the chicken drippings. Oy, it’s a shonda that I can’t have some right this minute.

Tip: to really save time and maximize flavor, prepare the bird the night before and refrigerate it. When you get home from work the next day, toss the potatoes in the paste, and slide the bird and potatoes into the oven. 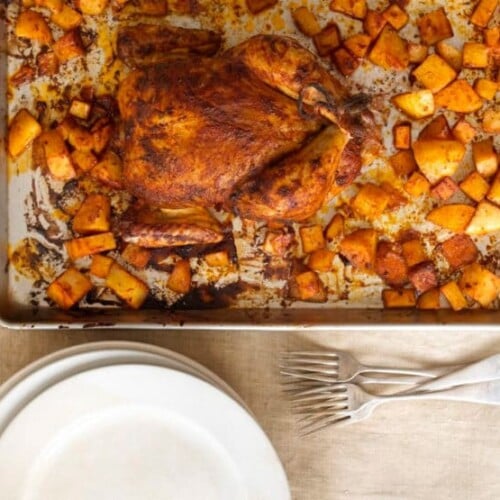 Nutritional information should be considered an estimate only; please consult a registered dietician, nutritionist, or your physician for specific health-related questions. Read more here. Please note that the recipe above is published using a recipe card plugin, with preexisting software which can auto-calculate metric measurements, as well as change the number of servings. Metric conversions and changes to the number of servings (resulting in different ingredient amounts) will only appear in the ingredient list, and are not changed within the step-by-step directions of the recipe.
132 shares
Grilled Matzo Brisket Wraps PREVIOUS