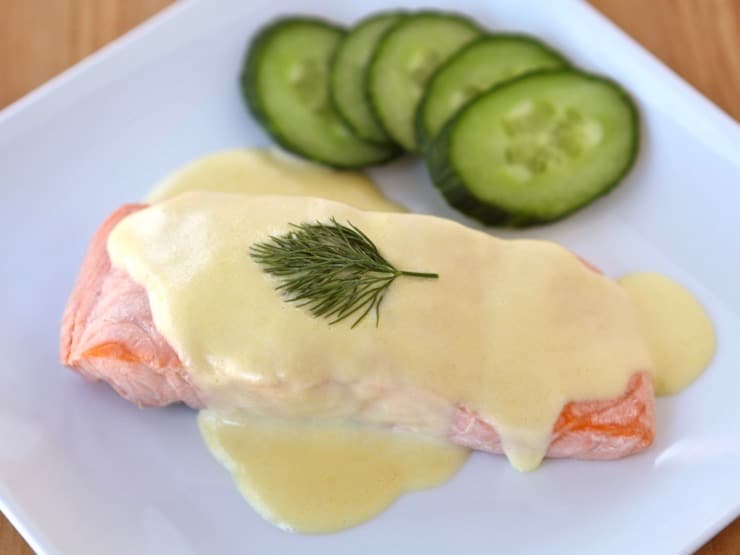 Salmon Mousseline – A Recipe from Titanic

Learn about the food onboard Titanic, inspired by M. Escoffier, then try a historical Titanic recipe for Poached Salmon with Mousseline Sauce.
1.4K shares
4.89 from 9 votes
Jump to Recipe Email Me Recipes 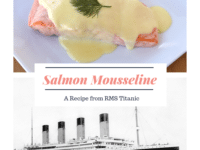 On April 12, 1912 R.M.S. Titanic, the “unsinkable ship,” ended her doomed voyage across the Atlantic. It’s a sad and haunting tale from history that cannot fail to capture the imagination. When I think about Titanic I find my imagination drifting through each deck, visualizing the kitchens, the dining rooms, the delicate china, and the refined cuisine. This Salmon Mousseline recipe comes straight from Titanic’s menu, a dish served during the very last dinner on board the ill fated ship. 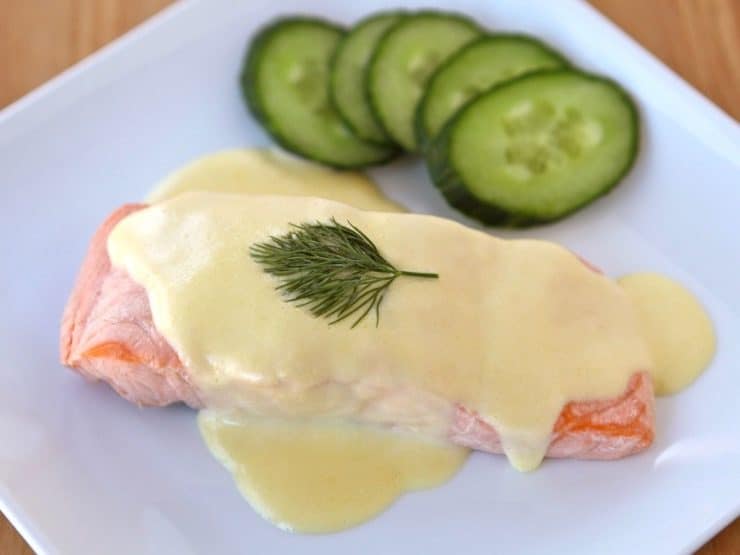 In order to truly grasp what a dining experience was like on Titanic, it’s important to know a bit of the culinary history of the time. Food on Titanic was heavily influenced by the style of Auguste Escoffier, a well-respected French chef known for his “haute cuisine.” During the late 1800s, Escoffier partnered with César Ritz (of Ritz Carlton fame), and made a name for himself as the head chef of the restaurants located inside the famous Ritz hotels. His food is known for being elaborate and fancy—what we might describe today as being “typically French.” His eleven course meals were sauce-heavy, often including smoked salmon with scrambled eggs and Beef Wellington. They became the trademark of indulgence and wealth, fitting perfectly within the first class dining rooms of Titanic. Many of his creations were named for the star patrons of the Ritz hotels, including the Peach Melba, named after the Australian singer Nellie Melba. Escoffier’s food was certainly noteworthy, though it was his ability to run a kitchen with respect for the entire staff, a highly unusual trait during this time, which made him stand out from other chefs. 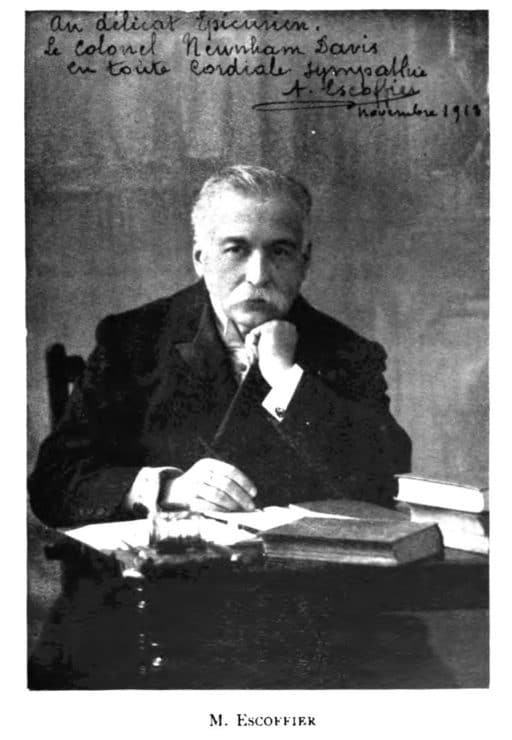 First class passengers had several dining rooms to choose from, and each one was influenced by the cuisine of Escoffier. The most popular was César Ritz’s luxurious namesake “Ritz” restaurant. A typical night of dining in the “Ritz” began with cocktails, which were “all the rage” in 1912, in the reception room. Diners were then called to dinner with a song called “The Roast Beef of Old England” performed by a bugler. The dinner itself began with an egg course that often incorporated caviar and aspics. Aspic, a gelatin-like substance, was often used to preserve foods before refrigeration was available. Once this was no longer an issue (and yes, there were refrigeration units on Titanic), chefs continued to use aspics to prepare visually stunning creations. The egg course was followed by a soup course, a fish course, a palette-cleansing course (often a sorbet), a meat course, a vegetable course, a dessert course, and finally a cheese course. Every course had its own individual wine pairing. Diners who were unable to consume such an extraordinary amount of food could opt for fewer courses. After dinner, most male passengers returned to the reception room for cigars, coffee and port or cordials. 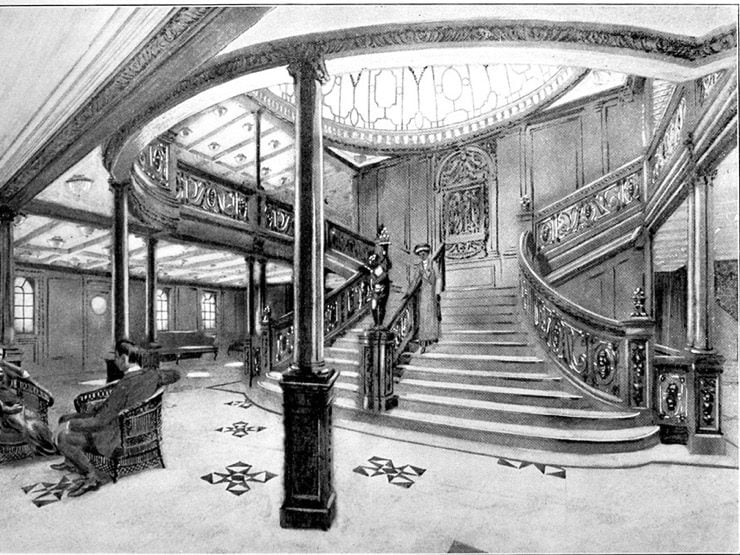 Other first class dining rooms included the Café Parisien, the Verandah Café, the A La Carte Restaurant and the First Class Dining Saloon. All of these restaurants would have been influenced by Escoffier’s culinary style, the Ritz most directly of course. It is from the First Class Dining Saloon that we have one of the only surviving menus from Titanic – the dinner menu from the night of April 14, the last meal ever served aboard the ship (see the menu below, along with a recipe).

Second class passengers were able to enjoy meals that were more generous than their usual fare. The food represented “a clear marriage of British and American food tastes, plum pudding sharing space with American ice cream.” A dinner included three courses—much fewer than first class—but it was cooked in the same kitchen as the first class meals. It began with a soup course, followed by a choice of meat as the entrée, and a choice of dessert.

Third class passengers onboard Titanic were largely made up of working-class Europeans with hopes of immigrating to North America. Because they made up such a large portion of the travelers on the ship, White Star wanted to make sure they were able to enjoy themselves. The tables were covered with white cloths and stewards waited on the diners. Meals included three courses. Though the fare was simpler than what was available in first and second class, it was a much higher culinary standard than most third-class travelers were accustomed to. 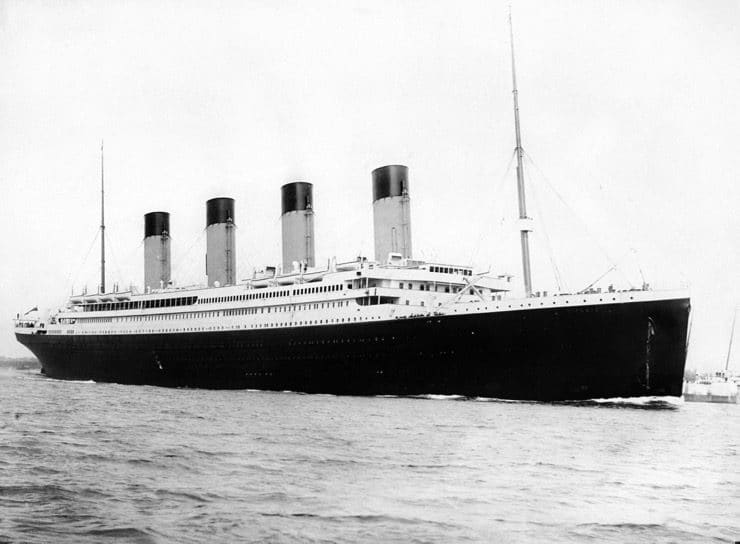 Here is the menu that passengers in the First-Class Dining Room enjoyed on the evening of April 14, 1912 – the last dinner served on Titanic.

Does this seem like a lot of food? Yes, indeed! Today, a Titanic-era menu would seem impossibly filling. At that time dining was considered the most important social event of the day. The ritual of eating dinner often lasted several hours, and the upper classes were well accustomed to course after course of rich food. Add to that a new wine for each course, and… well, have mercy.

To commemorate the 100th anniversary of Titanic’s fateful voyage,  I decided to recreate the third course on the menu – Poached Salmon with Mousseline Sauce and Cucumbers. I referenced an English translation of Escoffier’s cookbook Le Guide Culinaire (1907), as well as Rick Archbold and Dana McCauley’s helpful book, “Last Dinner on the Titanic.” Archbold and McCauley offer their own take on how this course might have been served. Between their interpretation and my own research into Escoffier’s cooking methods, I believe I have produced a salmon entrée quite similar to the one that was eaten on the evening of April 14, 1912. I’ve provided the recipe and steps below so you can try it yourself at home. 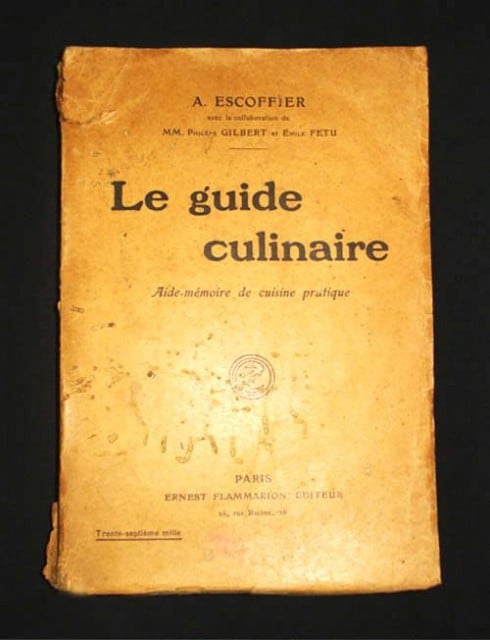 The court bouillon (cooking broth) recipe comes directly from Escoffier’s cookbook—the only change I made was to cut the salt in half. The original recipe called for 2 oz. of sea salt, equaling about 1/3 cup. In my experience with court bouillon, it seemed like too much salt, so I halved it. Grey salt is called for in the original recipe—I used French sea salt, which is similar in flavor with a lower mineral content. You can use table salt or kosher salt if you prefer. And of course, if you’d like to stay true to his original recipe, feel free to use the full amount of salt—just know that the poaching liquid will be quite salty. Escoffier calls for vinegar as the acid in the poaching liquid, but you could just as easily use lemon juice or white wine– I personally enjoy lemon juice in court bouillon. The choice is yours. If you’re running short on time, you can make a “fake” court bouillon by combining 2 ½ quarts of yellow vegetable broth with ½ cup acid (vinegar, lemon juice or wine), then salting to taste.

Mousseline translates in French as “muslin,” a type of light cloth. Like its namesake, mousseline sauce (also known as “chantilly”) is light and airy. Unsweetened whipped cream is folded into rich, buttery hollandaise sauce. Preparing a proper hollandaise can be tricky, so I’ve modified my blender hollandaise sauce (ala Julia Child), which has similar components to Escoffier’s hollandaise with the aid and simplicity of a blender method. Poached fish dishes like these were usually served room temperature; you can poach it anywhere from rare to well done. I prefer it well done, though it was probably cooked medium rare (pink in the middle) on Titanic. I’ve given instructions for both amounts of doneness. We can only guess how the cucumbers were served—they were most likely decorative, so I have cut them on the bias and placed them on the side as garnish. I’ve also garnished the top of the salmon with a small sprig of dill– this is optional.

While none of us can know exactly what it was like to be onboard the Titanic, recreating historical dishes like these brings us one step closer to the experience. If you choose to try this Poached Salmon with Mousseline Sauce, be sure to say a toast to remember the victims of the Titanic. 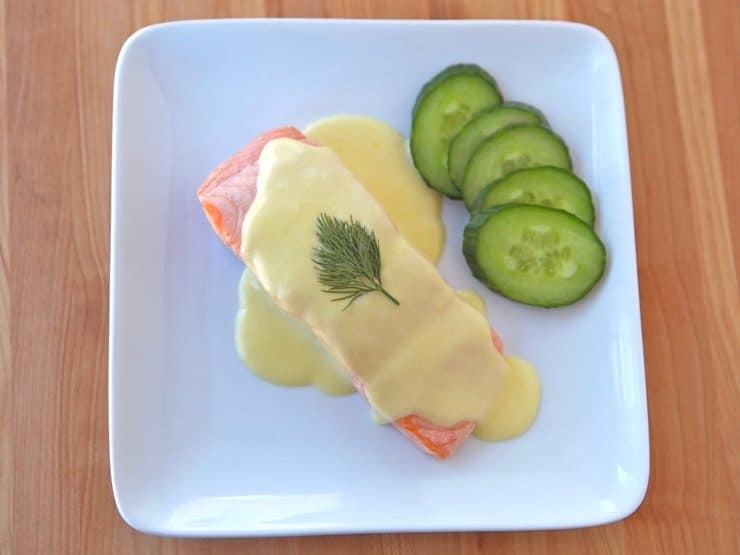 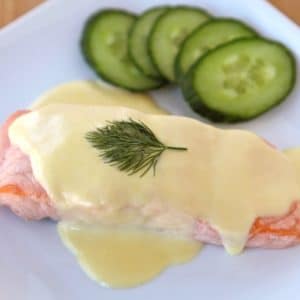 Nutritional information should be considered an estimate only; please consult a registered dietician, nutritionist, or your physician for specific health-related questions. Read more here. Please note that the recipe above is published using a recipe card plugin, with preexisting software which can auto-calculate metric measurements, as well as change the number of servings. Metric conversions and changes to the number of servings (resulting in different ingredient amounts) will only appear in the ingredient list, and are not changed within the step-by-step directions of the recipe.
1.4K shares
Cheese Roulade with Caramel Chocolate Glaze PREVIOUS