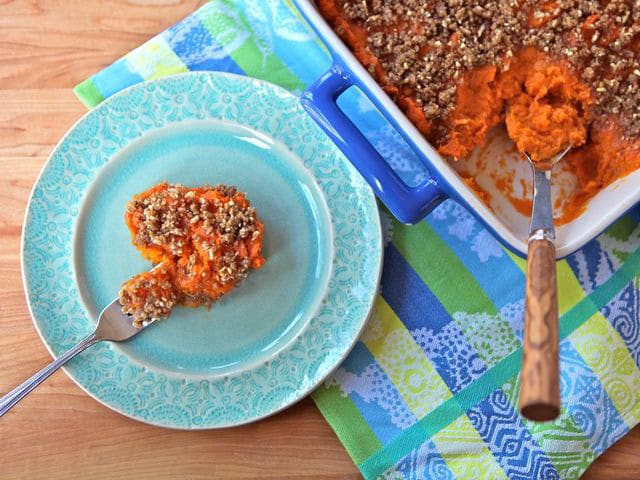 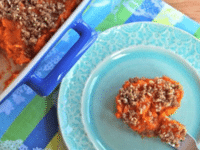 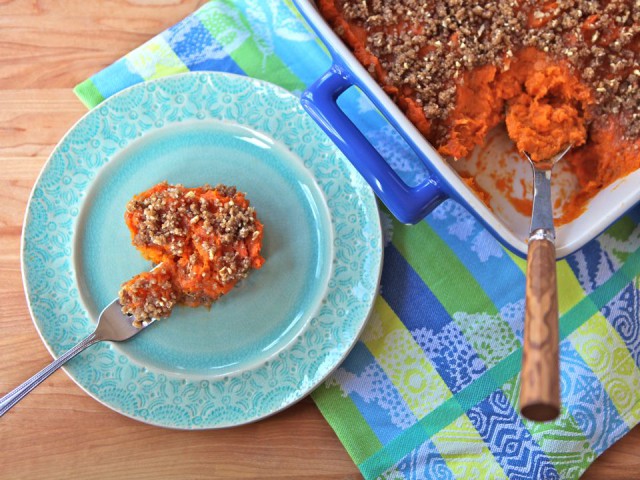 Imagine only being allowed a certain amount of meat per week… a world where sugar is precious and worth saving… where a coupon booklet is the golden ticket one needs to purchase the basics. Today, we don’t think twice about buying kitchen pantry products like butter, sugar, and meat; these products are widely available and easy to purchase at any grocery store. During World War II, however, grocery shopping wasn’t so simple. From gasoline to liquor to canned goods, nearly everything Americans bought had a point value. You were not allowed to exceed your allotted points in any given month; if you ran out of coupons, you ran out of luck. Many items simply could not be purchased without them.

During World War I, voluntary rationing had been encouraged by Herbert Hoover and the U.S. Food Administration. In fact, the now popular term “Meatless Mondays” originated in Herbert Hoover’s White House (it was originally “Meatless Tuesdays”) as a way to encourage citizens to cut down their weekly meat consumption. A war rationing system was officially established in the United States after the attack on Pearl Harbor, and continued throughout World War II. Shortages were frequent and constantly changing; what was available one week might not be the next. Citizens were allowed different items based on their age and needs; babies and children were allowed canned milk, while older citizens might not be depending on availability.

Food items rationed during the war included (but weren’t limited to) cheese, meat, coffee, butter, canned goods, jams, dried fruits, cooking oils, fats and shortening, and sugar. Everyday items were also rationed, including nylons, rubber and tires, coal, bicycles, toothpaste, and footwear. The list of rationed items grew with each passing month, as conflicts erupted in different parts of the world– places that would normally supply goods to the U.S. Rationing was accomplished in the spirit of patriotism, as Americans wished to help the war effort in any way they could. 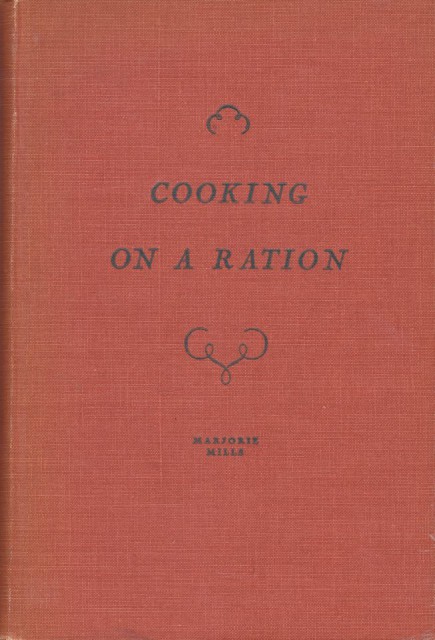 Cooking on a Ration by Marjorie Mills was published in 1943 by the Riverside Press in Cambridge, Massachusetts. It’s a classic rationing cookbook, released during World War II, to help home cooks deal with wartime food shortages. The goal of the author, as stated in the introduction, was to offer recipes and solutions for people who were only allowed a small amount of meat, sugar, and fat (oil) per week.

The food picture changes so rapidly we are almost breathless, determined to do what is asked of us, conserve our precious food supply, make it stretch to help feed the hungry– but, wistfully, we want Paterfamilias and the family satisfied and proud of what our ingenuity concocts. As Harpo Marx says, “It isn’t hard times are coming, but soft times are going.”

– Marjorie Mills, Cooking on a Ration

I wanted to try a recipe from the cookbook, to imagine myself in America at the time of rationing. It would have been a difficult yet creative period for the home cook, when once abundant ingredients were suddenly scarce. Family recipes were altered, ingredients were substituted, and the approach to cooking became more spartan. I chose to make a Nut-Sweet Potato Casserole. Here is the recipe as written in the cookbook: 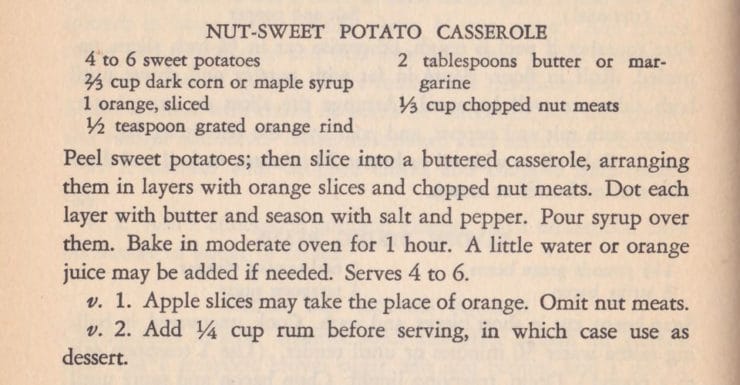 This casserole, like many historical and vintage recipes, did not turn out well when made as written. In fact, it needed quite a bit of tweaking to get it to taste good. The potatoes were undercooked and dry after 90 minutes in a 350 degree oven. The liquid collected at the bottom of the dish was thin and soupy. The oranges were limp and soggy. It was, to put it mildly, a waste of some lovely sweet potatoes.

Whenever I encounter a recipe like this, I don’t like to throw in the towel. Rather, I draw inspiration from both the recipe and the time period to create something new and palatable. In my reinvention of this casserole, I’ve roasted and mashed the sweet potatoes to combat the undercooked texture of the original slices. I’ve used the same basic ingredients in a new way– the orange flavor comes from fresh juice and zest, rather than slices; maple syrup is mixed into the mashed sweet potatoes to give them a warm maple essence; nuts and butter are chopped into a simple streusel topping with a little brown sugar added for sweetness. Sugar was rationed at the time, so I use it sparingly here– just 1/4 cup. Some recipes in the book call for 1/2 or even 2/3 cup of sugar, so I feel safe using a small amount in this updated version. The result is a casserole you can truly enjoy for Thanksgiving, or just because. As you serve it, consider sharing the history of war rationing with your guests. It’s such an interesting part of our American history.

Nutritional information should be considered an estimate only; please consult a registered dietician, nutritionist, or your physician for specific health-related questions. Read more here. Please note that the recipe above is published using a recipe card plugin, with preexisting software which can auto-calculate metric measurements, as well as change the number of servings. Metric conversions and changes to the number of servings (resulting in different ingredient amounts) will only appear in the ingredient list, and are not changed within the step-by-step directions of the recipe.
225 shares
Maple Butternut Squash Puree PREVIOUS