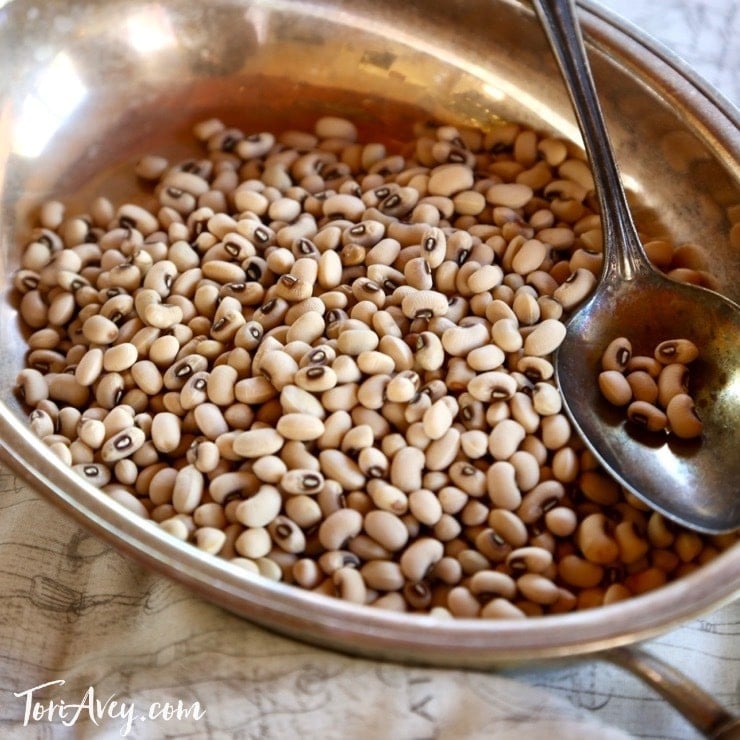 Learn how to cook dried black eyed peas to prepare them for use in recipes. Includes storage and freezing techniques.
634 shares
5 from 6 votes
Jump to Recipe Email Me Recipes 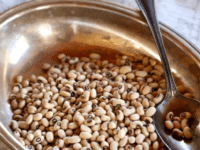 Black-eyed peas are not the most popular legume, but maybe they should be. They are far easier to prepare than most dried beans; they don’t require an overnight soak, like many beans do.  They are nutritious and a great source of fiber, protein, iron, and other beneficial nutrients. I like to prepare black-eyed peas at home, rather than buying canned. Home preparation is economical, and you won’t have to worry about the excess sodium and BPA in many canned beans. 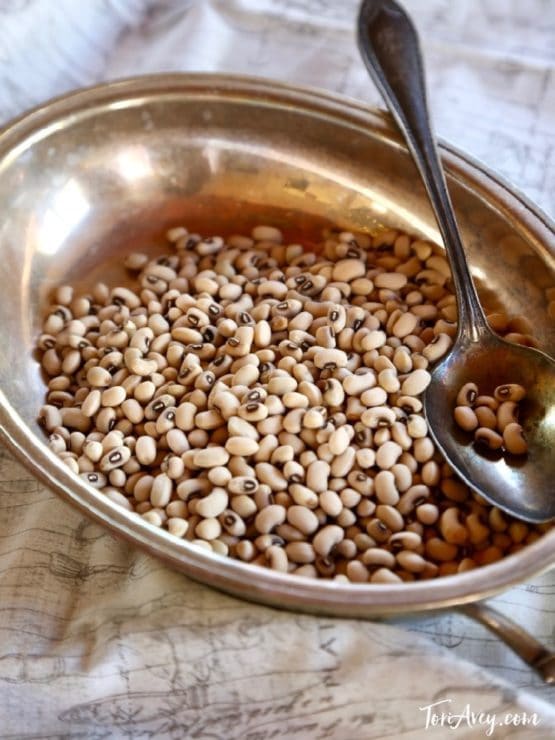 Black-eyed peas are culturally and historically significant during the celebration of the New Year for both Sephardic Jews and those living in the American South. The Jewish tradition comes from the Babylonian Talmud in which Abaye lists nine foods that should be eaten during Rosh Hashanah, the Jewish New Year.  Each food listed is representative of a wish to come in the New Year. The black-eyed peas are said to be a symbol for good fortune for several reasons. In fact, a few years back I made a recipe for Black-Eyed Pea Burgers in honor of this tradition.

In the South, black-eyed peas have been a symbol of good fortune since the Civil War. This American tradition originated in West Africa, where black-eyed peas were domesticated over 5,000 years ago. They made their way to America on slave ships, and were planted in the colonies in the early 1700’s.

Known then as cowpeas, the plant became an important part of the slave’s diet. During the Civil War, when William Sherman’s troops swept in, destroying and stealing the majority of Southern crops, the black-eyed peas were left behind. Though they may not have been anyone’s first choice, black-eyed peas proved to be an important source of nutrition for the starving Confederate soldiers.

Here, black-eyed peas are often eaten with other foods that symbolize growth and wealth. For example, golden cornbread and greens that swell when they are cooked representing both paper money and wealth.

Cooking black-eyed peas is a little different than cooking other dried beans because they don’t need to be soaked, which can be a great benefit if you are pressed for time. The method below uses a ratio of 10 cups of water per pound of dried black-eyed peas, if you plan to use a different amount, please adjust accordingly using this ratio. 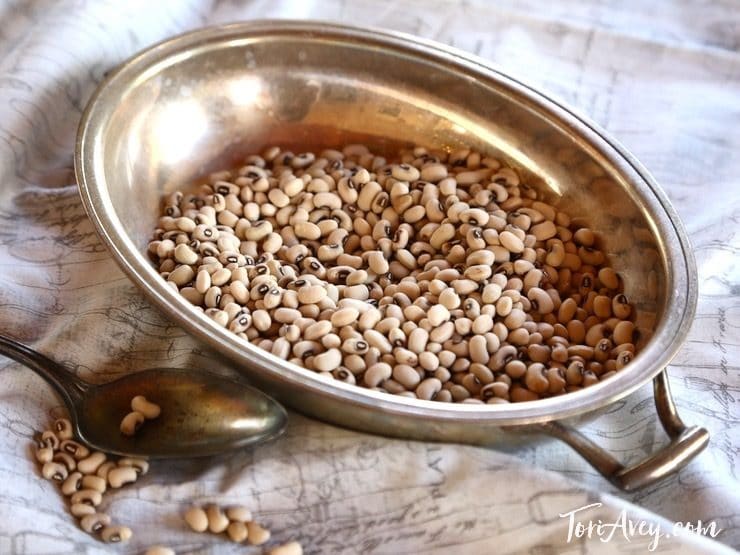 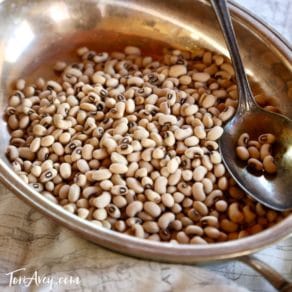 Stay in touch with me on Facebook, Twitter, Pinterest, YouTube and Instagram. Did you make one of my recipes? Tag @toriavey & hashtag #toriskitchen on Instagram or Twitter… I want to see!
Nutritional information should be considered an estimate only; please consult a registered dietician, nutritionist, or your physician for specific health-related questions. Read more here. Please note that the recipe above is published using a recipe card plugin, with preexisting software which can auto-calculate metric measurements, as well as change the number of servings. Metric conversions and changes to the number of servings (resulting in different ingredient amounts) will only appear in the ingredient list, and are not changed within the step-by-step directions of the recipe.
634 shares
Romantic Summer Picnic Date PREVIOUS