What was Cooking in Leonardo da Vinci’s Kitchen? 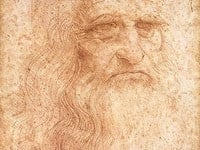 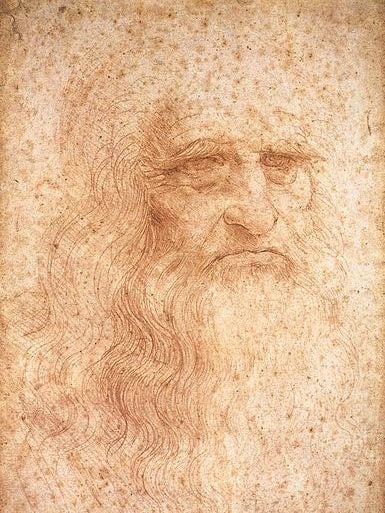 Born in the town of Vinci in 1452, Leonardo da Vinci came from humble beginnings. He was born out of wedlock to a notary and a peasant woman, then rose to become one of the most celebrated minds of the Italian Renaissance. Though well known in Italy during his lifetime, his creative genius, technological inventiveness and vision would not be fully recognized until hundreds of years after his death. We are most familiar with da Vinci’s remarkable artistic abilities, as evidenced by masterpieces like the Mona Lisa and The Last Supper. In addition to being a gifted artist, da Vinci was a polymath… a scientist, engineer, mathematician, musician, sculptor, astronomer, architect, zoologist, anatomist… and, perhaps most surprisingly, a budding nutritionist. Da Vinci was intrigued by food and valued its importance in our daily lives. He was also captivated by kitchen gadgets and inspired a few of the machines we still use today, including an automated device for turning meat on a spit. Shawarma, anyone?

Meticulous notebooks kept by da Vinci, some of which survive today, reveal why he was so suited to this new cultural perspective. They also give great insight into his relationship with food, nutrition and the kitchen. He started writing the notebooks at age thirty-seven and kept up with them until his death thirty years later. Mainly a random assortment of thoughts, notes and drawings, much like diaries, they were written in “mirror script” from right to left, with the letters themselves drawn backward. As you can imagine, his method for keeping his thoughts private made the notebooks even more difficult for scholars to translate. When da Vinci passed, he left between 50 and 120 notebooks to his prized student, Francesco Melzi. There are only 28 or so left today. Here is a passage from one of his notebooks regarding health and cooking:

If you want to be healthy observe this regime.
Do not eat when you have no appetite and dine lightly,
Chew well, and whatever you take into you
Should be well-cooked and of simple ingredients.
He who takes medicine is ill advised
Beware anger and avoid stuffy air.
Stay standing a while when you get up from a meal.
Make sure you do not sleep at midday.
Let your wine be mixed with water, take little at a time
Not between meals, nor on an empty stomach.
Neither delay nor prolong your visit to the toilet.
If you take exercise, let it not be too strenuous.
Do not lie with your stomach upward and your head
Downward. Be well covered at night,
And rest your head and keep your mind cheerful.
Avoid wantonness and keep to this diet. 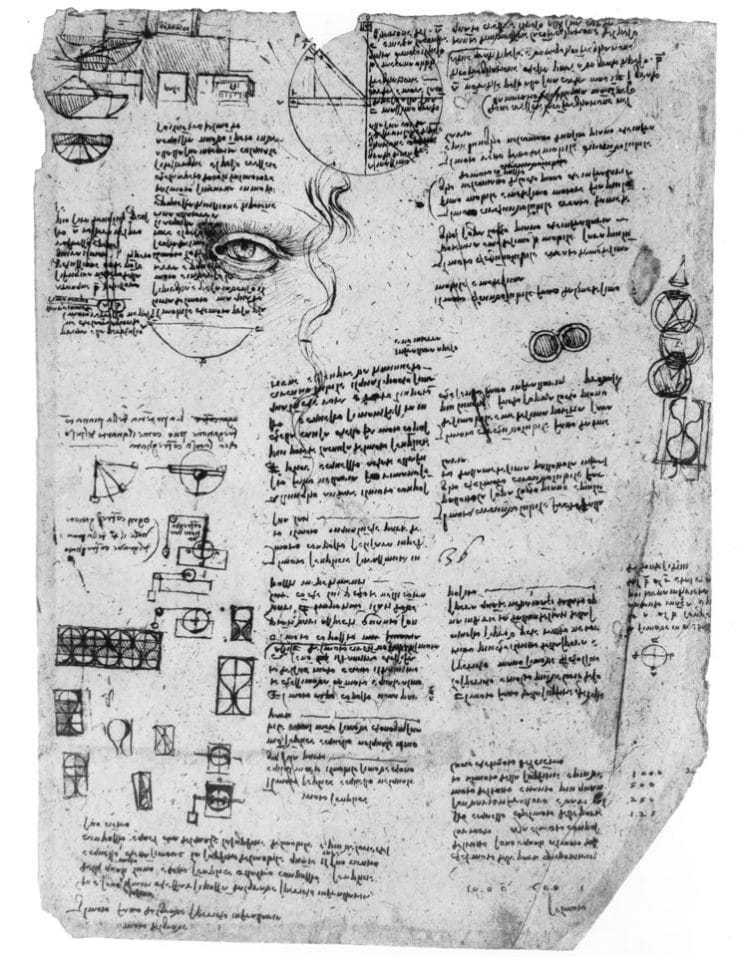 Da Vinci’s kitchen notebooks are filled with comments on the cost and quality of the food and drink he encountered throughout Italy. For example, da Vinci noted that a bottle of wine, a pound of veal and a basket of eggs cost “one soldo” each. Also included in the notebooks were his shopping lists, which varied between elaborate ingredients for court feasts and rather simple items for his own household’s fare.

In 1482, da Vinci joined the court of Ludovico Sforza, the Duke of Milan, who would later become a major patron of his artwork. While living there he spent time overseeing the remodeling of Sforza’s castle, including the kitchen. In his book Da Vinci’s Kitchen, Dave Dewitt includes da Vinci’s personal notes on how an efficient kitchen should be designed:

The large room for the retainers should be away from the kitchen, so the master of the house may not hear their clatter. And let the kitchen be convenient for washing the pewter so it may not be seen carried through the house… The larder, woodstore, kitchen, chicken-coop, and servants’ hall should be adjoining, for convenience. And the garden, stable, and manure-heaps should also be adjoining… Food from the kitchen may be served through wide, low windows, or on tables that turn on swivels… The window of the kitchen should be in front of the buttery (pantry) so that firewood can be taken in. 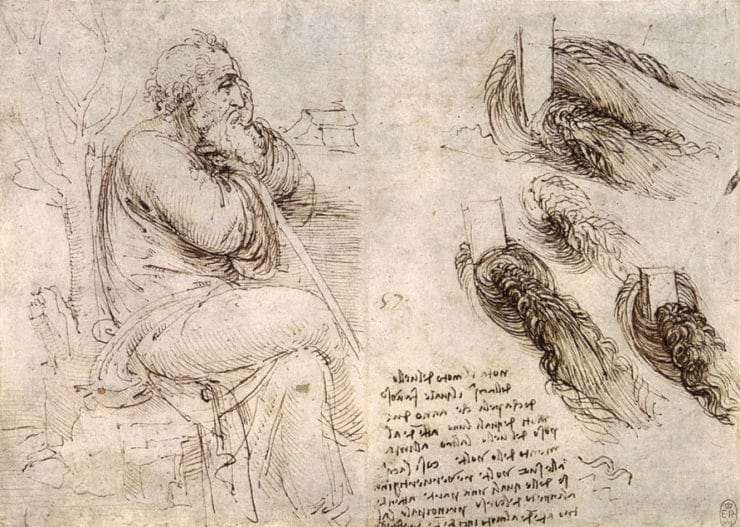 In discussing da Vinci and food, the topic of vegetarianism inevitably arises. The possibility of da Vinci abstaining from meat has been debated for years. A handful of quotes suggest that he may have been a vegetarian, though none of the quotes come directly from da Vinci himself. One quote commonly referenced comes from a letter written to Giuliano de’Medici by the Italian explorer Andrea Corsali, who writes: “Certain infidels called Guzzarati are so gentle that they do not feed on anything which has blood, nor will they allow anyone to hurt any living thing, like our Leonardo da Vinci.” Corsali was describing the eating habits of Hindu followers in India. Though the quote seems to suggest that da Vinci was a vegetarian, it is impossible to know what sort of relationship Corsali had with da Vinci beyond the fact that they both worked for Medici at one time. On the other hand, da Vinci’s shopping lists occasionally mentioned meat; however, the items listed were not all for his own private pantry. They also included whatever items he would need to feed his household. In reading his passages about nutrition and health, he advised a simple and light diet, and to abstain from gorging. This would seem to go hand-in-hand with a vegetarian lifestyle. Because da Vinci never spoke or wrote about his personal eating habits with regards to meat, we cannot say for certain what his diet consisted of, though it is quite possible that he was a vegetarian. 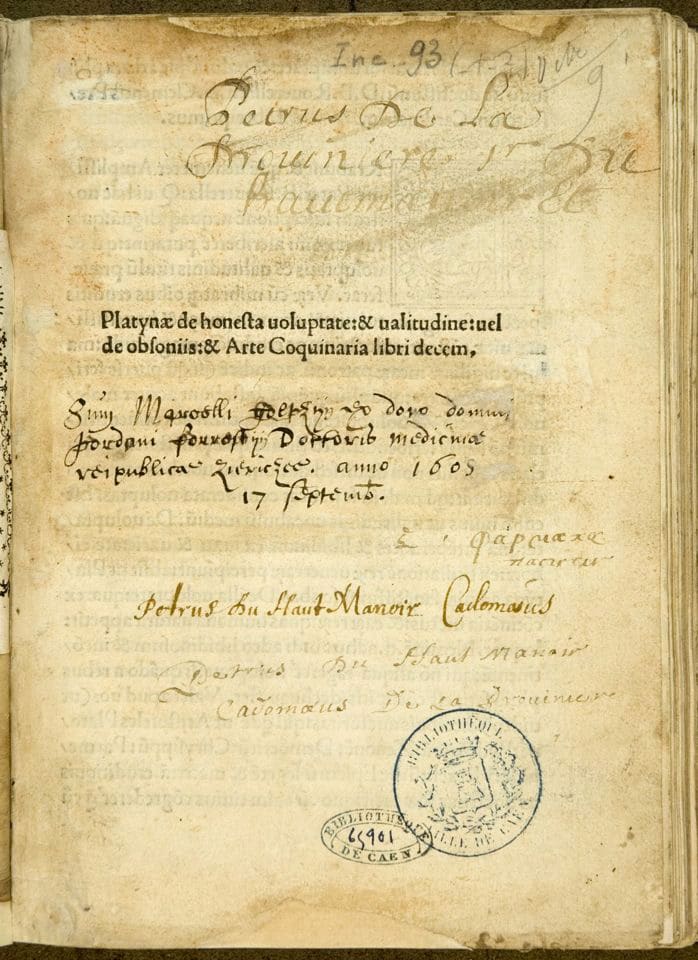 In his personal library collection da Vinci owned a single cookbook, Platina’s On Right Pleasure and Good Health, which is considered to be the first printed cookbook (and one of the first printed books anywhere). First published in Rome in 1470, the book focuses heavily on the dietary advantages of various foods and how to prepare them. Platina attributes many of the recipes found in his book to Italian culinary expert Martino da Como (also known as Maestro Martino), who might be considered the first “celebrity chef” in history. Martino was the chef for Ludovico Trevisan, the Cardinal Patriarch of Aquileia, and eventually the Vatican. The wealth of information shared in Platina’s book appears modern and ahead of its time, including Martino’s recipes. Nearly every recorded item in da Vinci’s larder (cold pantry) was included in Platina’s writings, including buttermilk, eggs, melon, grapes, mulberries, mushrooms, sorghum, flour, herbs, spices, beans, meat, sugar, vinegar and wine. (DeWitt, 114-122)

Da Vinci’s recorded observations and musings prove that he was a remarkably modern thinker, even when it came to cooking. He believed that the kitchen should run as a well-oiled, efficient machine. Today we have refrigeration, blenders, and electric mixers to help us along. I can’t help but wonder if the original Renaissance man would have been impressed by how far we’ve come in the kitchen.

Nutritional information should be considered an estimate only; please consult a registered dietician, nutritionist, or your physician for specific health-related questions. Read more here. Please note that the recipe above is published using a recipe card plugin, with preexisting software which can auto-calculate metric measurements, as well as change the number of servings. Metric conversions and changes to the number of servings (resulting in different ingredient amounts) will only appear in the ingredient list, and are not changed within the step-by-step directions of the recipe.
126 shares
Cheesecake Tiramisu Protein Pudding PREVIOUS

Chickpea, Spinach and Mushroom Sauté NEXT