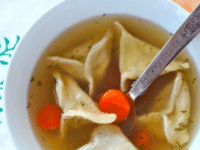 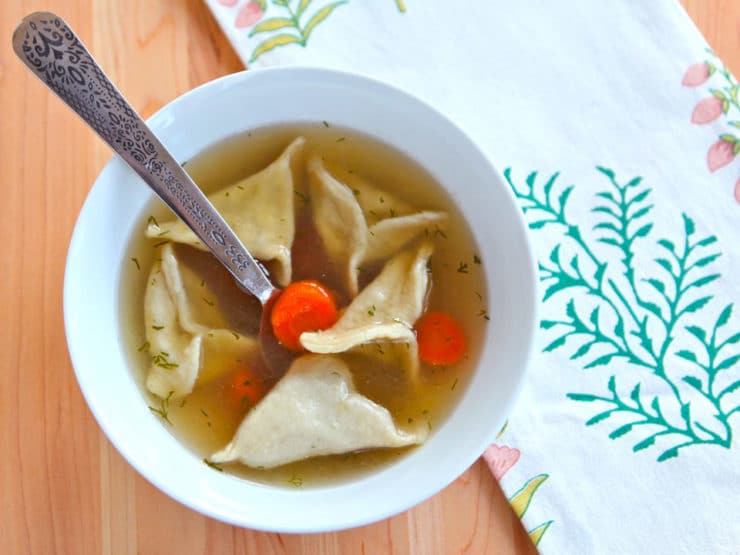 To bring us into the weekend, I thought I’d share one of those wonderful old-fashioned Jewish dishes– you know, the sort of dish that warms your tummy and your heart. It’s the kind of cooking that brings back memories of Bubbe in the kitchen, making her family recipes from scratch with a “pinch of this” and a “handful of that.” I never had a bubbe (mine were both called “grandma”), but if I had I’m sure this soup would have been one of her favorite recipes. I’m talking about homemade Chicken Kreplach!

Kreplach are stuffed noodle dumplings, a Jewish dish that has been around since Medieval times. Kreplach originated in Eastern Europe as fried pastries stuffed with meat, known as krepish. In the 15oo’s krepish evolved into stuffed pasta; the shift was likely inspired by Italian or Asian influence in the region. The dish became popular throughout Europe under different regional names (varenikes in the Ukraine, pierogi in Poland, agnolotti in Italy). In Eastern Europe and within the Yiddish community, they became known as krepl, which evolved to the plural word kreplach that we use today. It’s now considered a quintessential Jewish dish that has become standard fare on deli menus across the country.

Kreplach can be made with a variety of fillings. You can use boiled soup chicken, as this recipe does, which allows you to create both soup broth and kreplach filling from the same chicken. Other fillings include ground beef fried with herbs, leftover brisket or roast meat, and dairy kreplach stuffed with cheese. The cheese filling is often enjoyed during Purim, a Jewish holiday, and assembled in a triangular shape to resemble “Haman’s hat.”

Kreplach are generally served in a bowl of soup broth, but they can also be served on their own, like dumplings. Cheese kreplach are often topped with sour cream. My husband grew up eating kreplach topped with chopped walnuts, a tradition handed down from the Russian side of his family. They can even be stuffed with fruit or preserves and served as dessert.

How to Make Kreplach

My kreplach recipe is an adapted version of my mom’s homemade egg noodle recipe, with a little oil added to the dough for flexibility. They’re stuffed with a basic chicken kreplach filling– minced soup chicken, herbs, chicken fat and onions. I fry the onions to caramelize them and bring out their flavor before adding them to the filling. My herb of choice is dill, because in my family we’re dill fanatics. If you’re not a fan, you can substitute fresh parsley instead. And I always add a touch of the skimmed chicken fat from the broth for moisture and flavor. If I’m feeling naughty, I throw in a little of the fatty chicken skin. It might sound weird, but when ground in with the filling the fat produces a silky texture and adds a ton of flavor.

Did you know that kreplach can also be pan fried once they’re boiled? You can fry them in schmaltz for even more flavor. Instructions are provided in the recipe below.

Before you tackle homemade kreplach, keep in mind that this is a Sunday kind of project– it takes time. It’s also messy. Wear an apron, and prepare to get flour everywhere. I’ve provided step-by-step instructions with pictures to help keep you on track. It’s a long process, but it’s definitely worth the time and effort. Because it is a laborious process, kreplach are usually reserved for special occasions and holidays. They are traditionally served on the evening before Yom Kippur, the seventh day of Sukkot, on Purim, and on Shavuot (Shavuot is a dairy holiday, so cheese kreplach are usually served then). If you’re looking for an easier way to make kreplach, my friend Bella Hadar gave me the tip of using won ton dough– you can find it in the refrigerated section of most grocery stores. It won’t taste like homemade, but it’s a workable sub if you’re in a hurry or don’t have the patience to roll out the dough from scratch.

This is one of those dishes that just feels good to eat. There is a popular Yiddish expression, “Kreplach esn vert oykh nimis,” which roughly translates to– “One even gets bored of eating kreplach.” It’s the Yiddish equivalent of the American phrase, “Too much of a good thing.” Kreplach really is a good thing. Really really. And it’s hard to imagine having too much of it. So go on, make some kreplach! 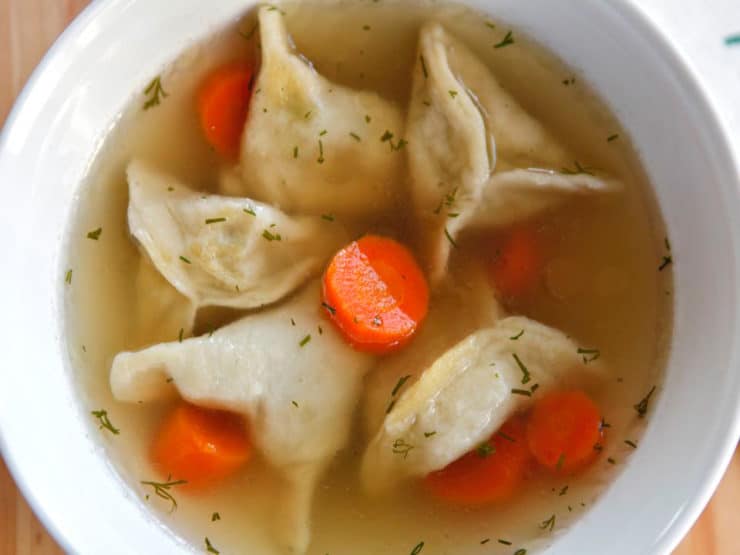 Nutrition Facts
Chicken Kreplach
Amount Per Serving
Calories 314 Calories from Fat 162
% Daily Value*
Fat 18g28%
Saturated Fat 3g19%
Cholesterol 104mg35%
Sodium 105mg5%
Potassium 339mg10%
Carbohydrates 19g6%
Fiber 2g8%
Sugar 2g2%
Protein 16g32%
Vitamin A 5365IU107%
Vitamin C 4.4mg5%
Calcium 42mg4%
Iron 1.9mg11%
* Percent Daily Values are based on a 2000 calorie diet.
Tried this recipe?Let Us Know How It Was In The Comments.
4.7 from 26 votes
Nutritional information should be considered an estimate only; please consult a registered dietician, nutritionist, or your physician for specific health-related questions. Read more here. Please note that the recipe above is published using a recipe card plugin, with preexisting software which can auto-calculate metric measurements, as well as change the number of servings. Metric conversions and changes to the number of servings (resulting in different ingredient amounts) will only appear in the ingredient list, and are not changed within the step-by-step directions of the recipe.
2733 shares