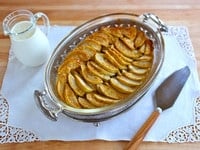 Abraham Lincoln was born on February 12, 1809 in a one-room log cabin on Sinking Spring Farm in Hardin County, Kentucky. From humble pioneer beginnings, Lincoln rose to become one of America history’s most celebrated Presidential leaders. He guided our nation through the resolution of the Civil War. His leadership helped bring an end to slavery and peace to our war-torn nation. With his birthday and President’s Day approaching, I couldn’t help but wonder… what kind of food fueled this legendary man, the savior of our Union? 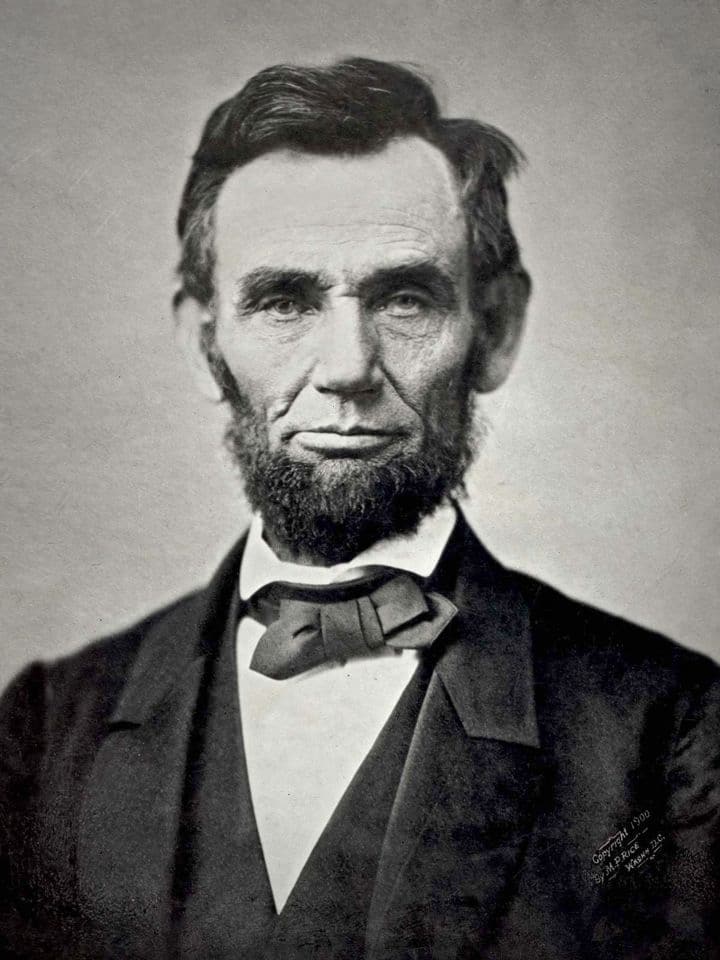 Abraham Lincoln was inaugurated on March 4, 1861 as the 16th President of the United States. When Abraham and his wife Mary Todd Lincoln moved into the White House, Mary owned a cookbook– “Miss Leslie’s Complete Cookery”– that she had purchased while living in Springfield, Illinois. This book, written by Eliza Leslie and originally published in 1837, was considered the most authoritative American cookbook of the time period. It was also the most widely read. Miss Leslie’s straightforward approach to cooking made her recipes popular with both urban and rural families.

Though born into a wealthy family from Lexington, Kentucky, Mrs. Lincoln’s tastes were frugal and simple. Growing up she had been taught social graces and etiquette at finishing school, never learning domestic tasks like cooking. When she married Lincoln, then a Springfield lawyer from a simple country background, Mary ran her household on her own. In “Mary Todd Lincoln: A Biography,” Jean H. Baker talks about Mary’s life in the kitchen:

Even with improved technology and help with marketing, cooking took up the largest part of Mary Lincoln’s day. By 1851, after nearly ten years of housekeeping, Mary Lincoln had progressed to an advanced version of Miss Leslie’s Cookery… there were recipes for everything from family soup to invalid cookery of beef tea and blackberry preserve… Because she had not learned the vices of sugar and, like everyone in Springfield, innocently believed it the “most nourishing substance in nature,” she spent hours making puddings, cakes, candies, and cookies.

Knowing that Mrs. Lincoln owned a copy of this cookbook and that it was the most popular of its time period, I felt it safe to assume that President Lincoln tasted many of the recipes in the book during his lifetime. It was also likely referenced by Mary when she coordinated meals and social events at the White House after President Lincoln’s inauguration. Because of this, it seemed fitting to make a recipe from the book in honor of Abraham Lincoln’s birthday. 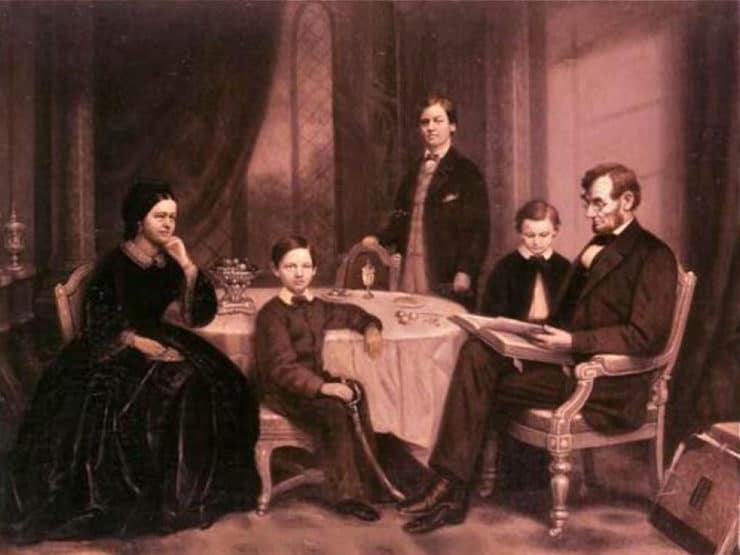 There are hundreds of recipes in Miss Leslie’s book. When choosing one to honor Abraham Lincoln, I settled on a dish made with apples. President Lincoln was known to like apples, and often ate the fruit with milk as a light lunch at midday. He once explained his affinity for apples to a fellow Illinois lawyer, Charles S. Zane: “Apples agree with me; a large percent of professional men abuse their stomachs by imprudence in drinking and eating, and in that way health is injured and ruined and life is shortened.” Lincoln was not known for excess, and tended to graze at his meals rather than indulge in large portions. This apple bread pudding would have been in keeping with Lincoln’s dietary habits, and it can easily be replicated in a modern kitchen. While there is no way to know with certainty that Lincoln enjoyed this particular dish, the recipe is a historically accurate glimpse at the way food was approached by Mary Todd Lincoln and other women of her social standing during Abraham Lincoln’s lifetime.

Here is the recipe exactly as it appears in “Miss Leslie’s Complete Cookery”:

Pare, core, and slice thin, a dozen or more fine juicy pippins, or bell-flowers, strewing among them some bits of the yellow rind of a large lemon that has been pared very thin, and squeezing over them the juice of the lemon. Or substitute a tea-spoonful of essence of lemon. Cover the bottom of a large deep dish with a thick layer of the sliced apples. Strew it thickly with brown sugar, then scatter on a few very small bits of the best fresh butter. Next strew over it a thin layer of grated bread-crumbs. Afterwards another thick layer of apple, followed by sugar, butter, and bread-crumbs as before. Continue this till you get the dish full, finishing with a thin layer of crumbs. Put the dish into a moderate oven, and bake the pudding well, ascertaining that the apples are thoroughly done and as soft as marmalade. Send it to table either hot or cold, and eat it with cream-sauce, or with butter, sugar, and nutmeg, stirred to a cream. This pudding is in some places called by the homely names of Brown Betty, or Pan Dowdy. It will require far less baking, if the apples are previously stewed soft, and afterwards mixed with the sugar and lemon. Then put it into the dish, in layers, interpersed (as above) with bits of butter, and layers of grated crumbs. It will be much improved by the addition of a grated nutmeg, mixed with the apples. 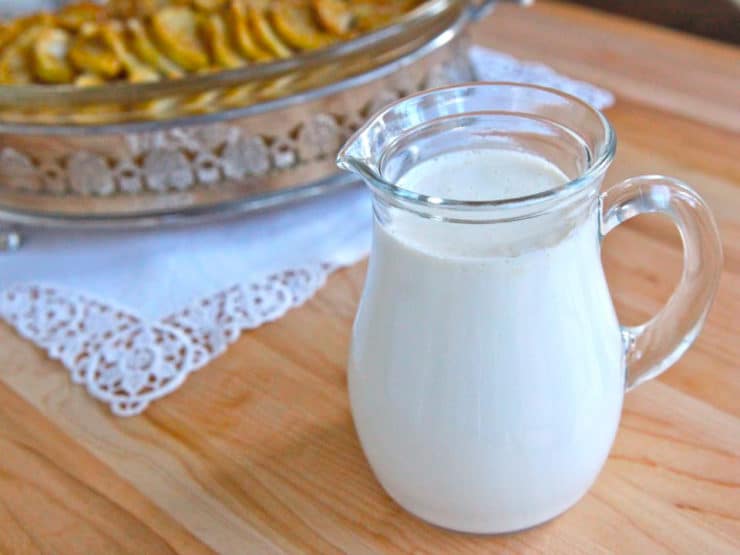 Puddings of this kind were nearly always served with some sort of sweet sauce– and, as you can see in the original recipe, Miss Leslie recommends a cream sauce or a butter sauce. To make this recipe period-accurate, I referred to the only sweet “Cream Sauce” recipe featured in Miss Leslie’s cookbook. The sauce is optional, but fitting– it adds moisture and a subtle sweetness to the Apple Bread Pudding. I found the sauce to be a bit lacking in sugar, and it is not thick the way bread pudding sauces are today. That said, it worked well to moisten the already sweet pudding and added another layer of flavor. It’s also very easy to put together.

The original Cream Sauce recipe in “Miss Leslie’s Complete Cookery” creates quite a bit of sauce, so I’ve cut down the recipe by a third while keeping the sugar content the same to increase the sweetness just slightly. Here is the recipe as written in the book, you can use the original amounts/proportions if you prefer:

Boil a pint and a half of rich cream with four table-spoonfuls of powdered sugar, some powdered nutmeg, and a dozen bitter almonds or peach kernels slightly broken up, or a dozen fresh peach leaves. As soon as it has boiled up, take it off the fire and strain it. If it is to be eaten with boiled pudding or with dumplings send it to table hot, but let it get quite cold if you intend it as an accompaniment to fruit pies or tarts.

You’ll notice the rather unusual ingredients mentioned– bitter almonds, peach kernels, and fresh peach leaves. Bitter almonds can be toxic in their raw state, and it’s illegal to sell them unrefined in the U.S. Refined bitter almond oil can be found in some gourmet markets, but it’s not easy to come by. Likewise, peach “kernels” (aka “pits”) are not available in abundance at this time of year, nor are peach leaves… most of us don’t have an organic, pesticide-free peach tree growing in our yard. To add the nutty flavor that these ingredients would provide in the sauce, I’ve subbed a teaspoon of almond extract. Use bitter almond oil if you can find it, it will be a more accurate flavor– but only use 1/4 tsp, or to taste. True bitter almond oil is very potent.

This pudding is simple to make and surprisingly lovely… while baking, the apples do indeed become “soft as marmalade” below the surface. There isn’t much “bread” in the pudding– the breadcrumbs add some texture, but the real star here is the abundance of sliced apples caramelizing with brown sugar and butter. What a fun way to celebrate Abraham Lincoln’s birthday and the President’s Day holiday! 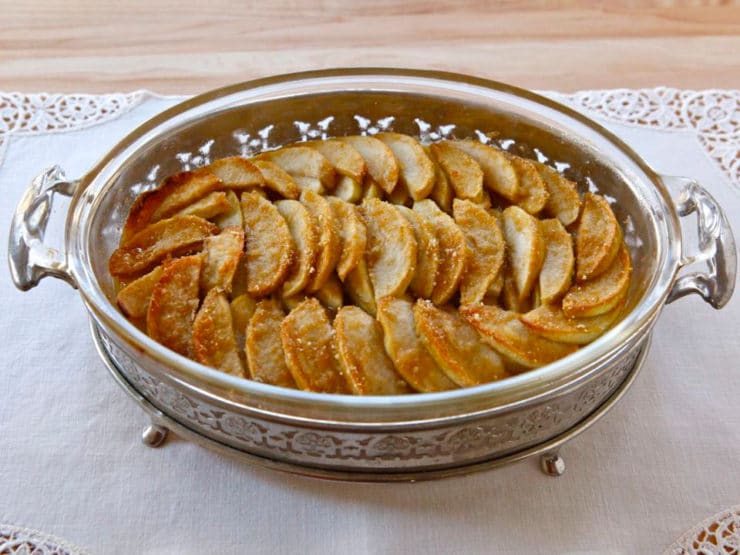 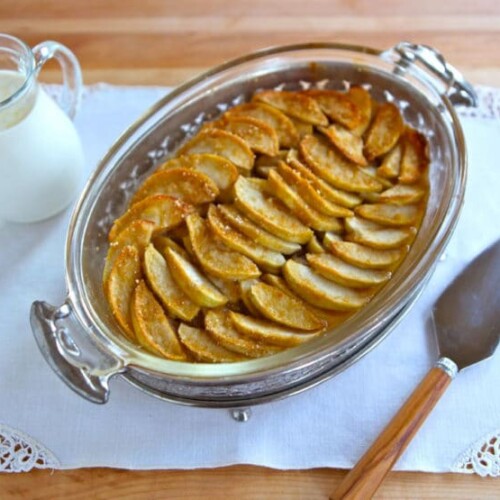 How to Make Apple Bread Pudding

How to Make Cream Sauce

My blogging friend Lori Lynn over at Taste With The Eyes wrote another terrific post for Lincoln’s birthday, click here to read!

Nutritional information should be considered an estimate only; please consult a registered dietician, nutritionist, or your physician for specific health-related questions. Read more here. Please note that the recipe above is published using a recipe card plugin, with preexisting software which can auto-calculate metric measurements, as well as change the number of servings. Metric conversions and changes to the number of servings (resulting in different ingredient amounts) will only appear in the ingredient list, and are not changed within the step-by-step directions of the recipe.
900 shares
Garden Vegetable Medley PREVIOUS